Slow down a particle system on a path?

Hey there I have particles following a path.

I want them to follow the path at a constant speed until they are about 90% along the path, and then I want their speed along the path to slow down to a stop at the end of the path.

Is there a way to do that?

As I understand it you want to slow down the already born and moving particles. The method described in your link (with changing the lifetime) only slows down the particles born from the moment of lifetime change on.

To make it work in the way you want it, you need another force field, as @Chris suggested, like Drag for example. The problem is, if you're using the Curve Guide force field where the speed is controlled by the particles' lifetime, Drag will have no effect.

In order to make it work you need to set the force field on the curve to Force with a negative strength to attract particles, and choose Shape > Curve. The result will behave a little different than the Curive Guide force field, maybe you have to play around with it to get the desired movement.

But this way you can place a Drag force field somewhere on the curve with a Max Distance setting enabled to limit its influence on the particles. 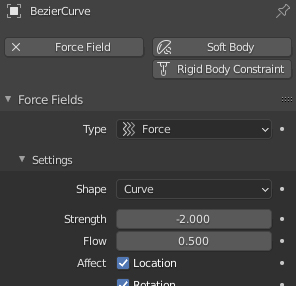 11
What is the best way to animate the camera path?
1
how to control particle rotation during its lifetime?
0
Object not following path
0
How to make particles fall straight down instead of initially going up?
1
Particle system emitting upside down
0
How can i slow down particles after baking
0
How to keyframe speed of particles?
2
animate part of the way along Follow Path