Why can't I import a SVG file from Adobe Illustrator or Inkscape?

I've tried multiple times to import a SVG file from illustrator CS5.5 to Blender 2.71 and 2.73. However, I do not see a mesh, curve, or anything pop up in my "Outliner" window. So I know its not so small I can't see it. I even made sure under user preferences that the "import and export of SVG 1.1 format" is "checked." I've tried even just importing text from illustrator and I'm still getting no where. What can I do to resolve this problem? If this is common error with this version of Blender, then what can I do to transform an image into a 3D object in Blender?

This is a very common error with a simple solution.

Just because you saved your file as SVG, it doesn't mean that the information is in vector format, and blender's SVG importer expects vectors (paths) to create curve objects.

What that means is that the SVG format can contain three types of graphic objects:

Currently the Blender's SVG importer can only read paths (vectorial graphics). Raster and text information will not be imported.

So how do I import SVG files correctly then?

In this particular case your illustrator/inkscape file is just a bitmap image contained within the SVG file, but is not an object made of paths.

In illustrator select your graphic, and form the menu select: Object->Live_Trace->Tracing Options. Then trace. 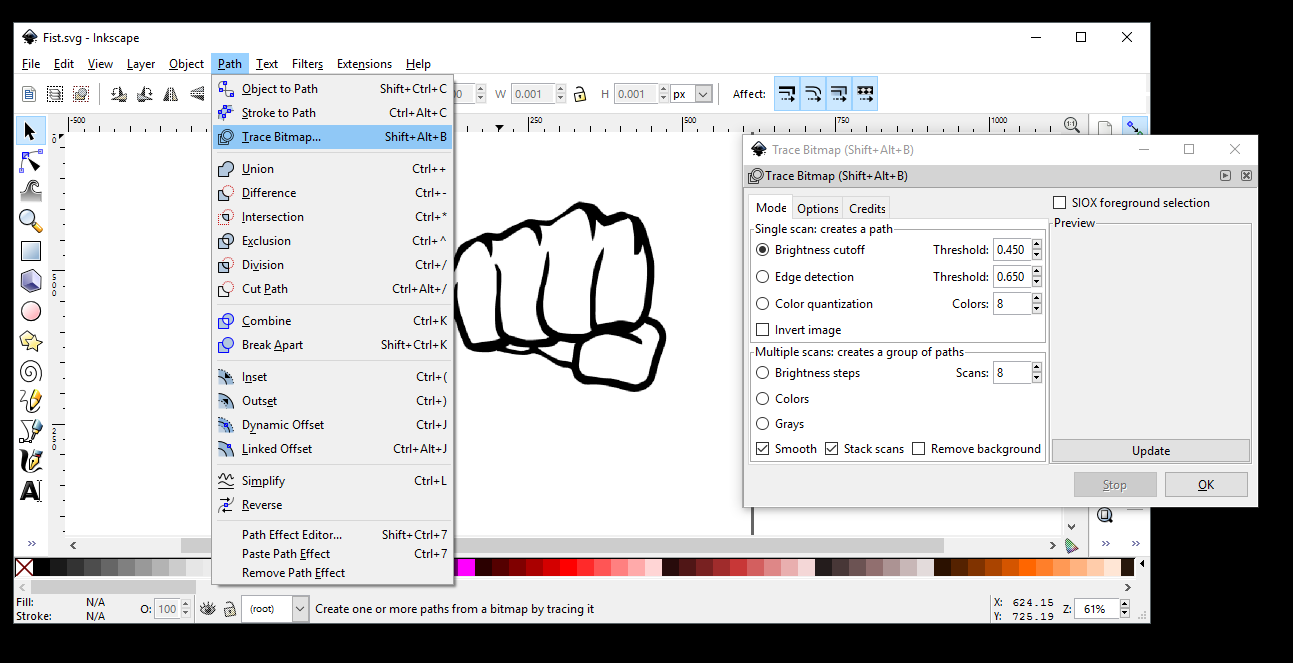 Once the image has been properly traced and saved as SVG, the file should import correctly on Blender. 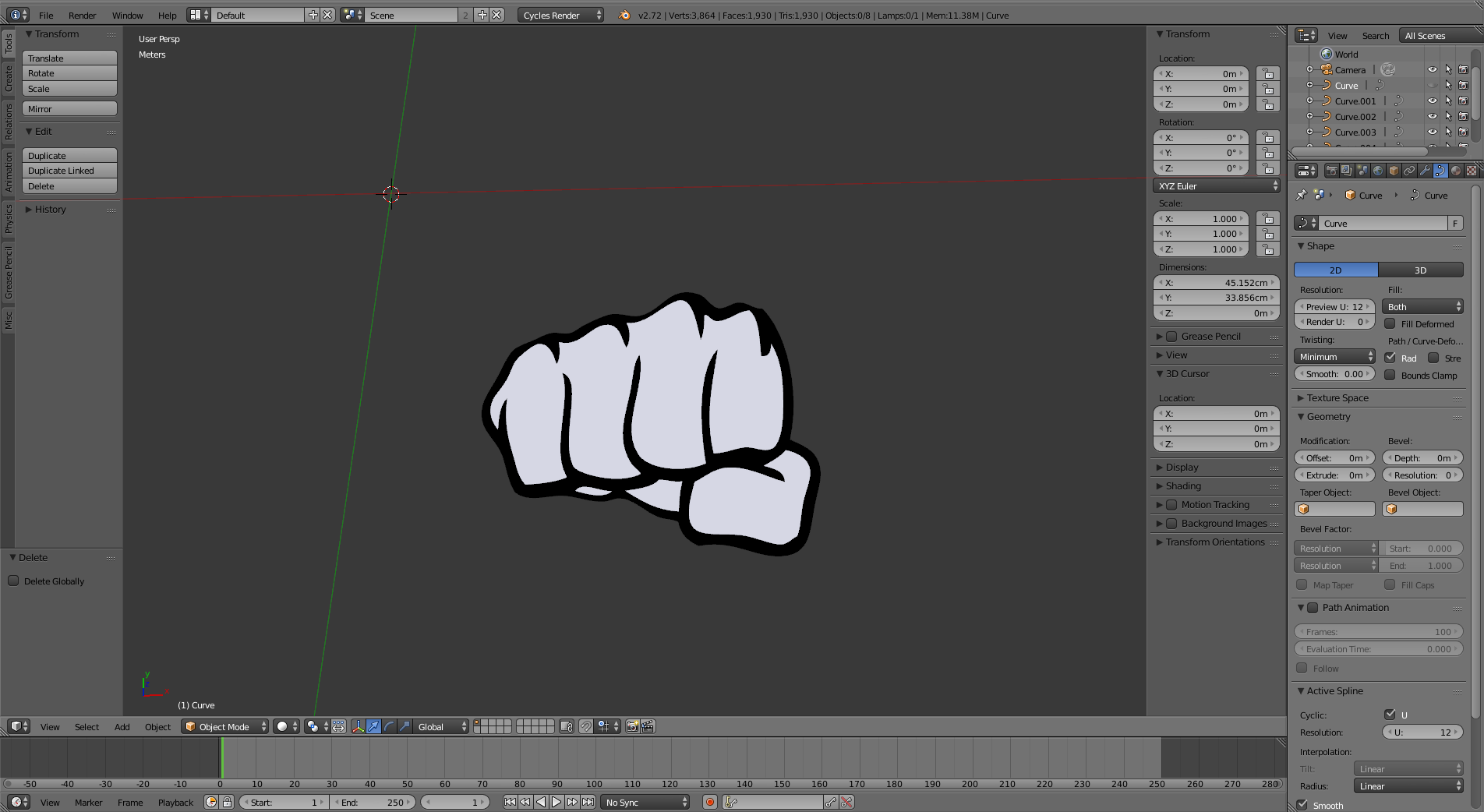 Random tips to deal with SVGs

When exporting from illustrator un-check this box: 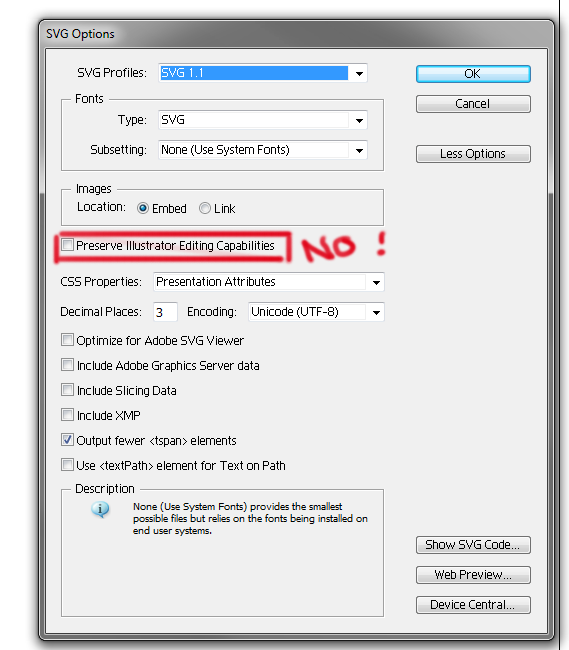 On newer versions of there is an option to save as Adobe CEF when saving as SVG. Do not use that, but SVG instead. (see this question) 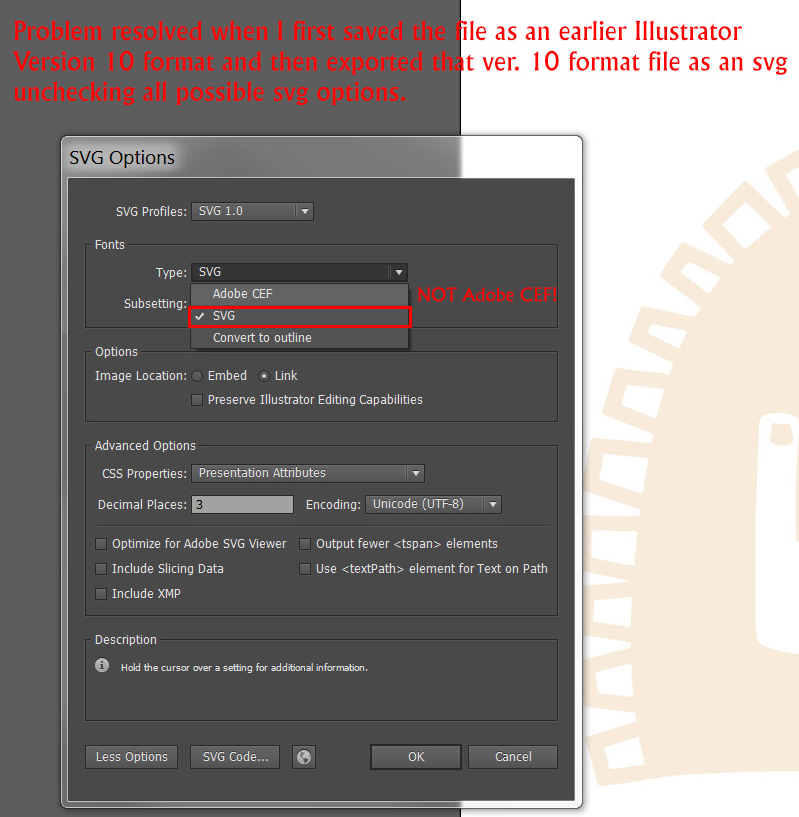 Text in illustrator doesn't get translated into outline curves automatically when you save as SGV either: You have to select the text and go to Type->Create Outlines first. Once is converted to paths, it's easy to create a SVG file that blender can deal with.

In Illustrator you can have paths that are filled but not closed. Those paths might not translate correctly in blender, so make sure to close your paths in illustrator before exporting.

The scale in which the objects where created might not match blender's scene scale (Read this post). Upon importing you may see that there are new curve objects in the outliner but they might not be visible in blender's 3D viewport because they are too small (or sometimes too large). If that's the case you might need to zoom in on the viewport to find your objects, or you might also need change the clip point for the viewport. You can fix scale/visibility issues re-scaling the imported objects or re-scaling your scene.

For more on this topic please read this and this:

Not the answer you're looking for? Browse other questions tagged image import or ask your own question.

4
Imported .svg files does not show up
2
Blender isnt letting me import any SVG files
1
is it blender or my svg
1
Blender 2.83 Scale SVG not showing visual effect
0
Having trouble importing SVG file into blender
0
SVG Import from Inkscape
9
Can I map a vector image on a mesh?
10
Why won't Blender let me import .svg files?
11
Making 3D object from a SVG file
4
How do I extrude an imported svg along the z axis without clipping the original shapes?
See more linked questions

1
Cannot Import .SVG File
5
How do you import SVG without a fill?
3
I can't import a COLLADA (.DAE) file into my scene
1
Import SVG option doesn't appear on the import menu
1
Importing a complex SVG to Blender from Illustrator - Problems with Fill
3
Complex SVG file fails to import correctly into Blender