I'm, quite new to modelling in Blender and I was experimenting with the extrusion of faces command using the starting cube. These are the steps I followed and lead to my confusion (also see accompanying image showing steps).

It seems that by using the "Extrude Individual Faces" changes the behaviour of the "Extrude Faces Along Normals" when used after this.

I wouldn't be at all surprised if I'm missing something basic in Blender and exposing my "newbieness" but I thought I'd ask to see what that something is? 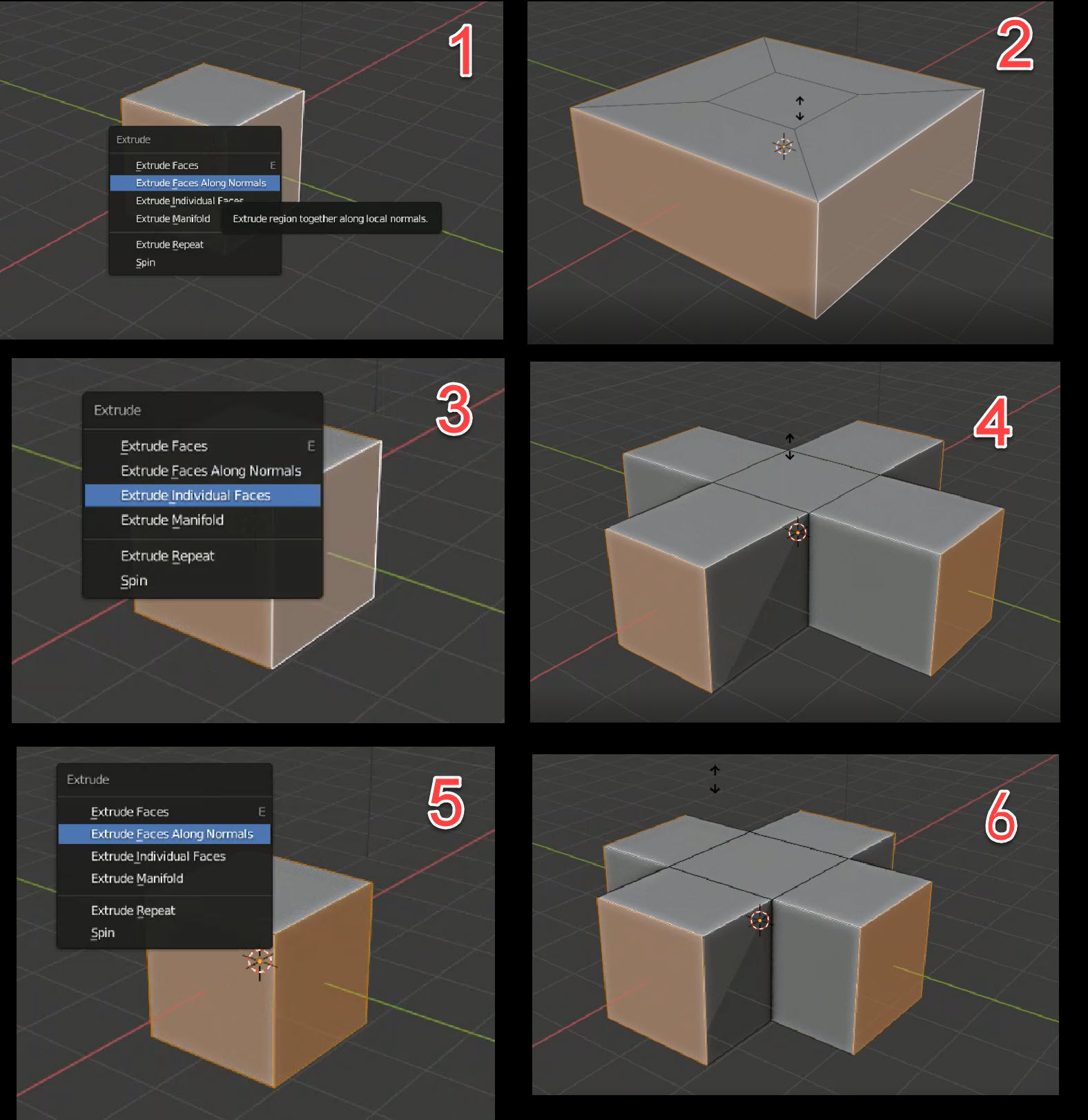 Extruding is unique in blender in that simply pressing ESC does not "cancel" the operation as one might expect (as it does with other things such as scaling). When you press ESC to "cancel" an extrude operation, all it does is snap the extrusion back to as if you extruded by 0 (it duplicates the "extruded" faces, and leaves them in their "starting place"). Thus, you will end up with duplicate faces. To avoid this, you must undo (Ctrl + Z) to fully cancel out of an extrusion. I think you will see the cube behaves more consistently if you do it this way.

The "Thing You're Missing" is one of the most common causes of confusion in the modelling interface, so don't worry, you're not alone.

If you "abandon the command" with Esc or a right-click, on a generative operation, (i.e. an extrusion or an inset,) you are not abandoning the generation of new faces. You are just abandoning the subsequent movement of new edges. You are dropping the new faces in place.

The next use of AltE > Extrude along normals extrudes the newly generated faces, which are automatically selected, and not a contiguous group. Each single-face island is an 'individual', extruded along its own normal.

To truly abandon all of an extrusion or inset, including the generation of new faces, you must CtrlZ undo the whole operation.

While this is confusing to the unprepared/unwary, it does make for fast modelling in many situations. It is often useful to make an extrusion, drop it in place, and then decide how to transform the new faces. So, personally, I would not like to see it 'corrected'.

Not the answer you're looking for? Browse other questions tagged modeling normals or ask your own question.