I have a specific color palette I want to use to create / animate a tv noise effect (along with being able animate the scaling and rotation of it).

I was looking at the Noise Texture Node but didn't see a way to input a specific color texture palette.

I was looking at the Noise Texture Node but didn't see a way to input a specific color texture palette.

If you can provide your palettes as images, not containing any out-of-palette colors, you can do something like this..

Some textures you may use as your noise, produce a random color output. Instead of using that RGB as a color, you can consider the color's R and G to be the U and V coordinates at which to sample your palette-image: 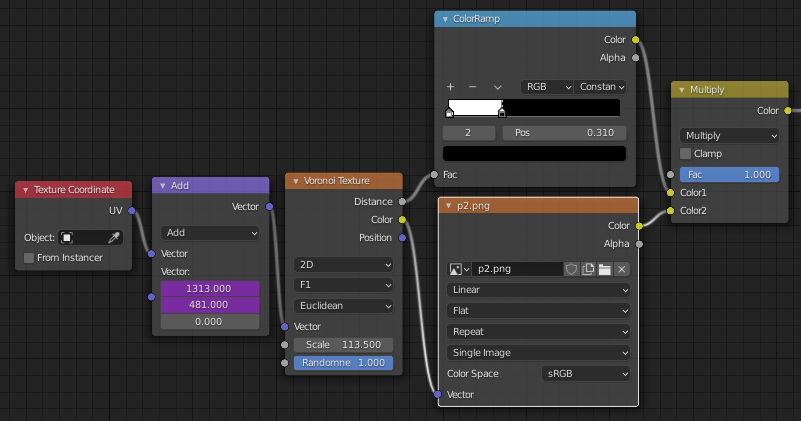 Here,the output 'Color' of a Voronoi texture is used to look up a color from a palette image called p2.png.

(There's other stuff going on.. the 'Distance' of the Voronoi is being used to create a mask against black, and a shift of the overall coordinates of the texture are being driven by some function of #frame. That would vary, according to what you need your texture to look like.)

The result using p1.png, (which is shown on the left):

Here, the palette-images are square, mapped 0-1 in X and Y, and include no irrelevant colors. Voronoi spreads its output color evenly across the 0-1 range, so equable sampling is relatively easy.

But you may have to watch out with other shapes/styles of palette, and mappings.

The color of the random output of some textures is not evenly distributed in the 0-1 RGB range, so may bias the selection from the palette. You could, for example, include a frame-dependent White-Noise jitter on the UV lookup to overcome that? That would be a few more nodes.

If you have particular constraints on those other aspects, and get stuck, edit your question, and I would be happy to edit this answer in an attempt to cope with them.

To get colors from your noise texture you can use this nodes setup, but of course that's a very time consuming solution with a color palette...

But if you know python maybe you can add the colors to Colorramp via python too ;)

Not the answer you're looking for? Browse other questions tagged animation texturing uv node-editor geometry-nodes or ask your own question.