How can I generate a correct polygon from an array of unordered vertices? 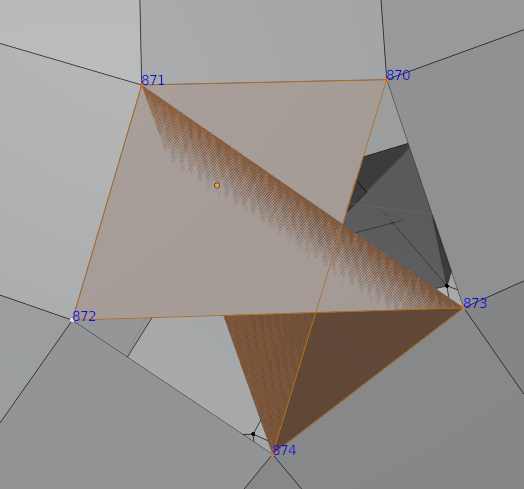 I am working on a bmesh script that procedurally creates a mesh.

I'm having a problem determining how to order the vertices for the generated n-gon face.

I know the position of each vertex - but need to order them somehow so the face doesn't fold over itself.

Normally with blender UI you can select several vertices and use the fill feature to automatically create a face and fill the hole. Somehow this is automatically finding an order.

Should I be sorting the vertex positions by the position in space? I thought about sorting by X then Y or something like that but this won't work in all use cases in any dimension?

So the question is :

Given a list of vertices that are all aligned to a single arbitrary plane - how to determine which vertex order is best to generate a non-self-folding face?

The Blender function that makes a poly from a point cloud is BM_vert_sort_radial_plane.

(If you want to read it, here's some quick links to BM_verts_calc_normal_from_cloud_ex and angle_signed_on_axis_v3v3v3_v3 too).

So for verts in a plane, it looks like the idea is to simply sweep out a circle around the centroid, taking verts in the order you hit them.

Assuming the verts are roughly a circle (no verts at the centroid, no edges pointing radially away from the centroid) you can do this with something like the function below. (These assumptions are pretty easy to lift if you need to, they just simplify the code a bit.)

Note that you might get CW order instead of CCW. I think you get CW order if the first two verts in the input list are in CW order (and similarly for CCW). Maybe you have another way to pick the facing direction though.

Not the answer you're looking for? Browse other questions tagged python vertices bmesh or ask your own question.

7
How can I stop Blender from selecting vertices on backfaces?
5
How can I find out the correct order of vertices to create a quad face with bmesh?
0
Union partially overlapping cubes without boolean modifier
4
Shifting face vertex order