Is there no way of rendering headless using EEVEE?

I am using a computer without good graphics card and a remote LINUX server with a K40 Tesla card. I am operating on a remote server by MobaX to get the rendering working. For now I'm using Cycles to render and everything works just fine, here is my command:

However, sometimes it is quite expensive to render a simple scene using Cycles so I'd like to use Eevee to render my animations.

I tried lot to make it work. According to the official guide, I use:

to call for Eevee engine but it failed. In debug mode I get:

And in debug-all mode I get a lot of errors: 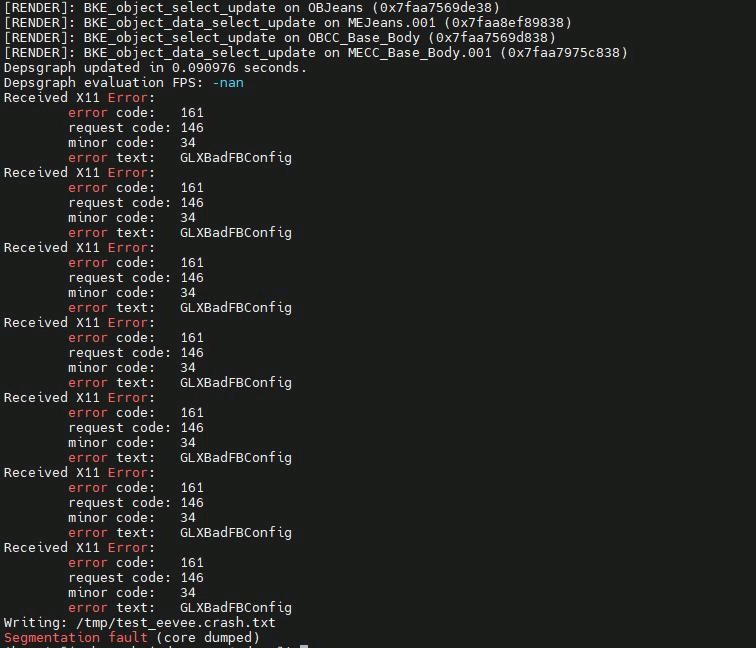 Seems that Eevee does not support headless rendering: Headless Eevee rendering However, it seems that we can fake a display to use Eevee. But the script in that Q&A is not crystal clear and I'm using Blender 2.92 version.

Is there any way to render headless using EEVEE?

Check my self answered question here:

How do you use Eevee renderer in a Docker container using bpy?

It's instructions for how to use Eevee in a container, but the instructions are directly translatable to your scenario.

Basically what you would do is create a service that starts xvfb.

Fair warning though, in my experience Eevee doesn't have nearly as impressive a speedup when run in this manner. Not sure if it's because xvfb doesn't offer the best performance, but after I tested for a while I decided to simply stick to Cycles when running in a headless environment. Eevee was faster, but an image that took maybe 5 seconds to render when running Eevee on my actual computer took like 10 times longer running as a container, whereas Cycles was maybe 3 times longer.

So, for me at least, my result was that:

So again, for me Eevee was still faster, and rendering roughly 30% faster is still nice, but I so vastly prefer the results from Cycles that it didn't feel worth the added hassle just to get a worse result faster. When Eevee was vastly superior in performance I could live with a less appealing result, but headless Eevee led me to prefer the idea of running multiple Cycles renders simultaneously on multiple servers then merging the results.

Not the answer you're looking for? Browse other questions tagged rendering eevee-render-engine command-line or ask your own question.

7
How do I force the netrender to render everything on GPU?
11
Headless Blender using Cycles without X-server?
0
Cannot render, because of too many faces
1
How do I balance render load between Gpu and CPU
0
Headless Eevee rendering
0
Rendering on CPU vs GPU how to enable CUDA and performance on older system
4
How do you use Eevee renderer in a Docker container using bpy?