How one would approach this specific snake motion in Blender as shown in reference:

The position of the snake visibly remains almost static while the body parts quickly change their position. Using Curve and Armature Modifiers doesn't seem to help much and Soft Body Physics are difficult to control.

Edit (by vklidu): In general - current solutions are not really solutions:

It depend how advanced rig or complex animation it should be.
For given reference it could work with ...

Not perfect yet ... I have difficulties to set shape of wave I like to (still too spiky). For now just a concept to play with :)

Later I want to try Lattice or something similar that allows me adjust tips of waves to get more roundness, but ... busy days so if someone wants to move it forward ...go ahead :)

Here is my take using curve Shape Keys for the animation. This requires some good animation skills and patience.

I prefer using NURBS curve for this specific shape - Figure 1

Initially I start with a Curve Path object and subdivide it twice Then subdivide some more only the first segment where the head will be and then snap these generated points to the first control point. I'll call them "spawn points". Currently the segments they create will not contribute to the curve shape as they have zero length. 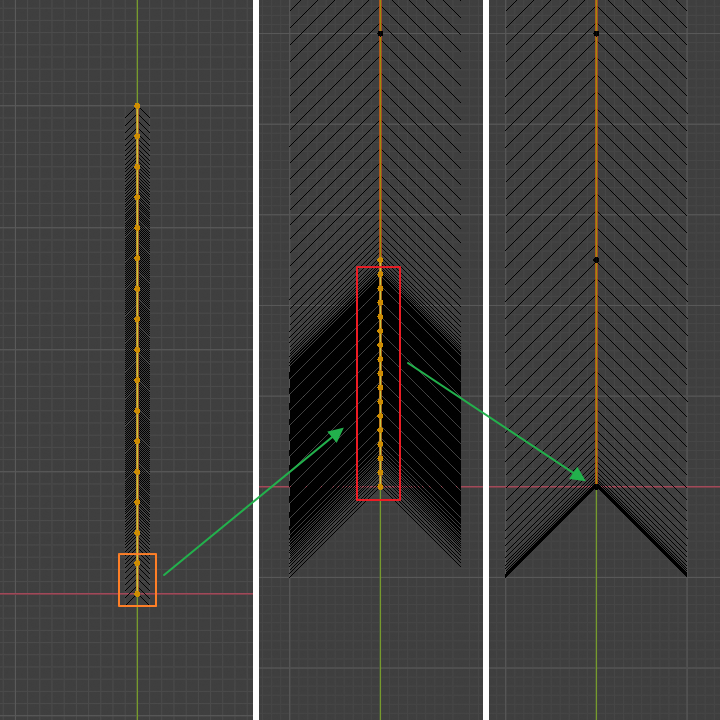 Now I start pushing the body points to form the initial snake body shape - Figure 2. That is not necessary but saves some animation time as my intent is for looping animation. 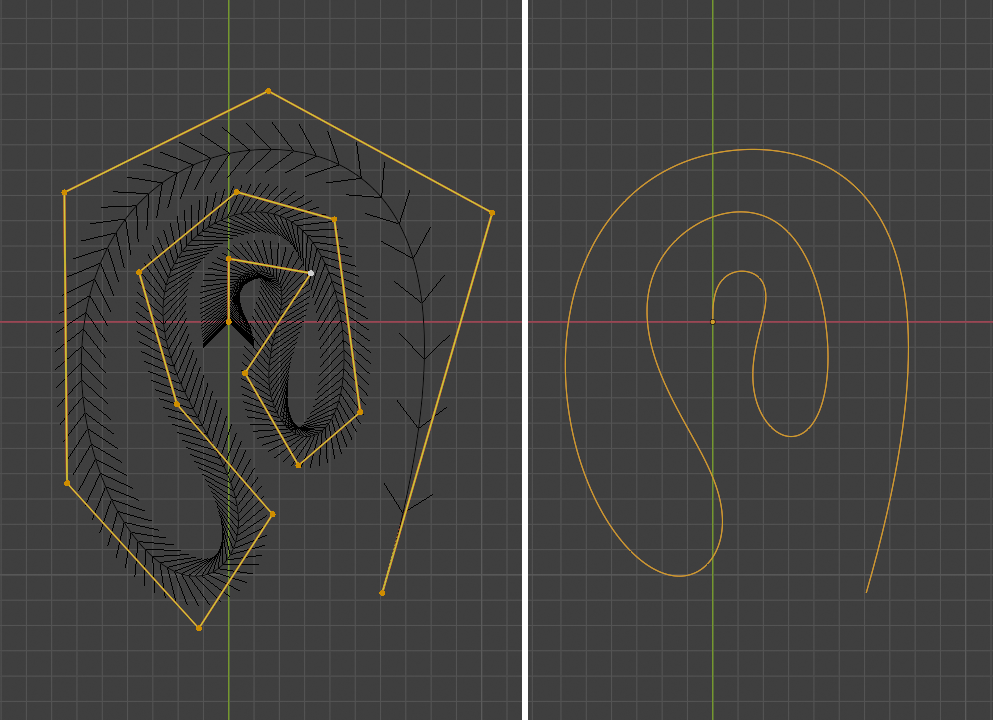 On the next step we add the snake object and use the NURBS curve as Curve Modifier. It is important to be able to see the body of the snake to prevent intersecting body parts during the animation - Figure 3 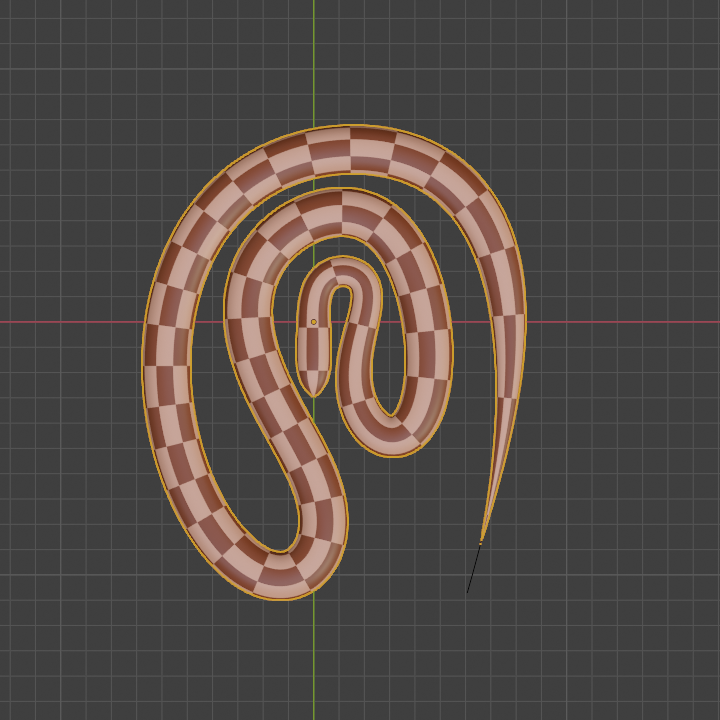 The last step is harder to describe in few words but basically the animation is a sequence of Shape Keys of the NURBS path. I prefer using Absolute shape keys (the Relative option is turned off) as it is easier to control the speed using the Evaluation Time property. Figure - 4 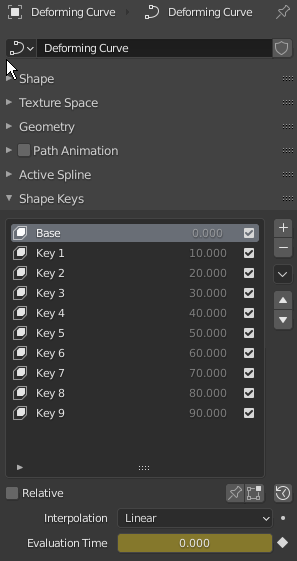 On each sequential Shape a new "spawn" point is introduced, leaving the location of the first "head" point. It will now contribute to the body shape, providing more resolution (point density) where it is most needed (close to the head and neck). To select a subsequent "spawn" point just select a previous one then [CTRL]+[+] to include it in the selection. You can see how the shape changes in the attached blend file and on the animation below (apologies for my poor FFMPEG conversion skills) Blend file:

Pros: It is easy to animate using fewer modifiers and objects.

Cons: Due to the nature of shape keys the transition form one shape to another is in linear fashion and this doesn't produce very smooth result unless you use more and more shape keys. That makes this animation hard to reproduce and modify.

I would like to bring two new variants to the Curve deforming approach that avoid the "pinching issue" at the points where the snake is extremely bent. I would like to thank to Quentin Clemence for pointing in that direction and bringing more variety of the solutions of this problem.

I'll try to be as brief as possible due to the solutions being fairly simple and understandable.

The animation curve is initially a "zig-zag" shaped cylinder (closed curve). One could play with the width of various parts of the "waves". 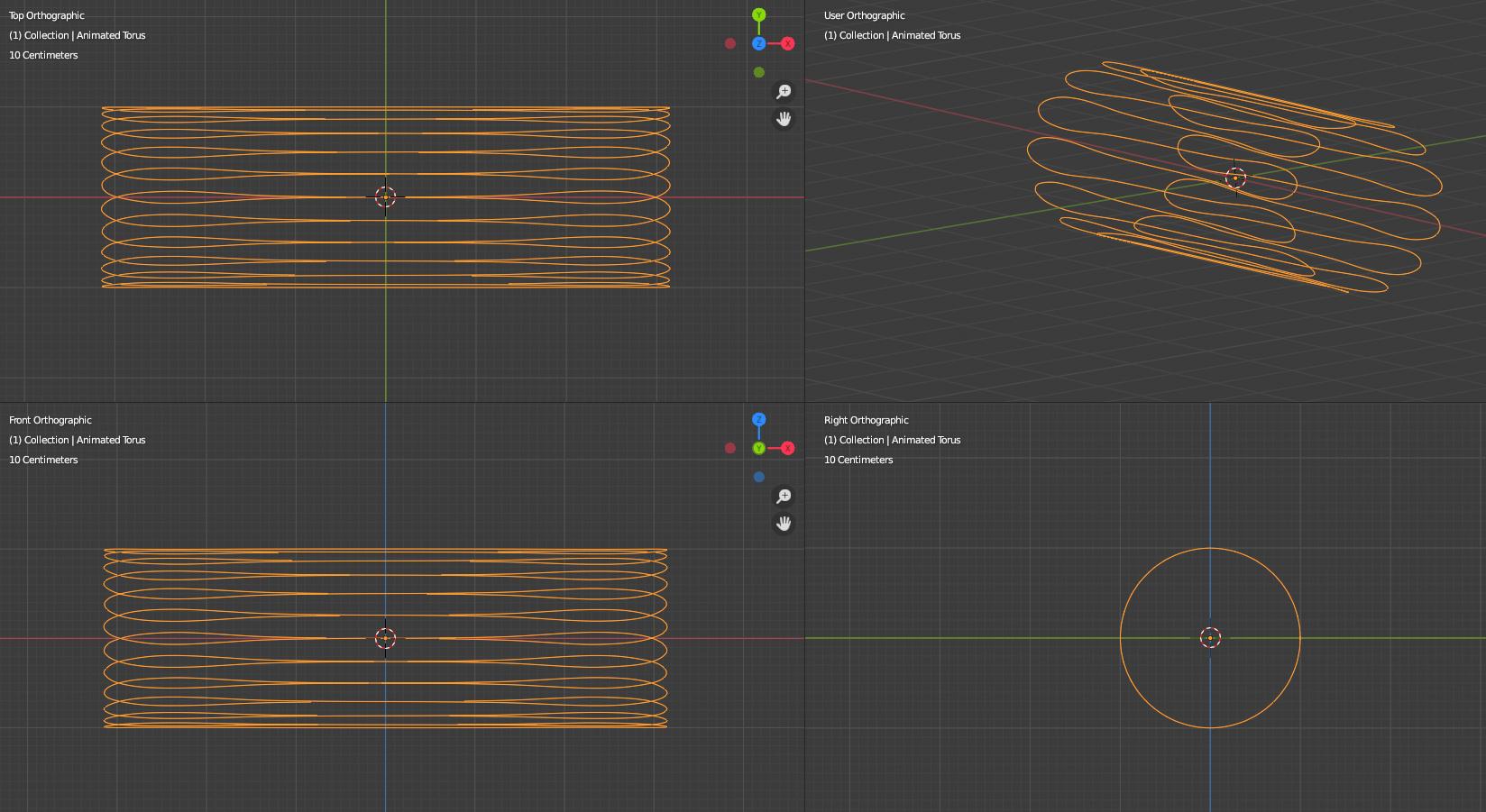 A Hook modifier rotates the curve along the cylinder's axis. Then a Simple deform shapes it into a Torus. Animated it looks like this:

The model snake is NURBS path curve but it could be also a mesh object with Curve modifier. To keep the snake in place a linear transformation is animated to counteract the rotation of the torus. The result looks like this:

The shape of the animated curve can be deformed additionally using Lattice modifier.

The position of the snake can be adjusted in such way that the head is going up in the center of the torus where some sort of distortion happen. A possible solution is given at the end of this text. 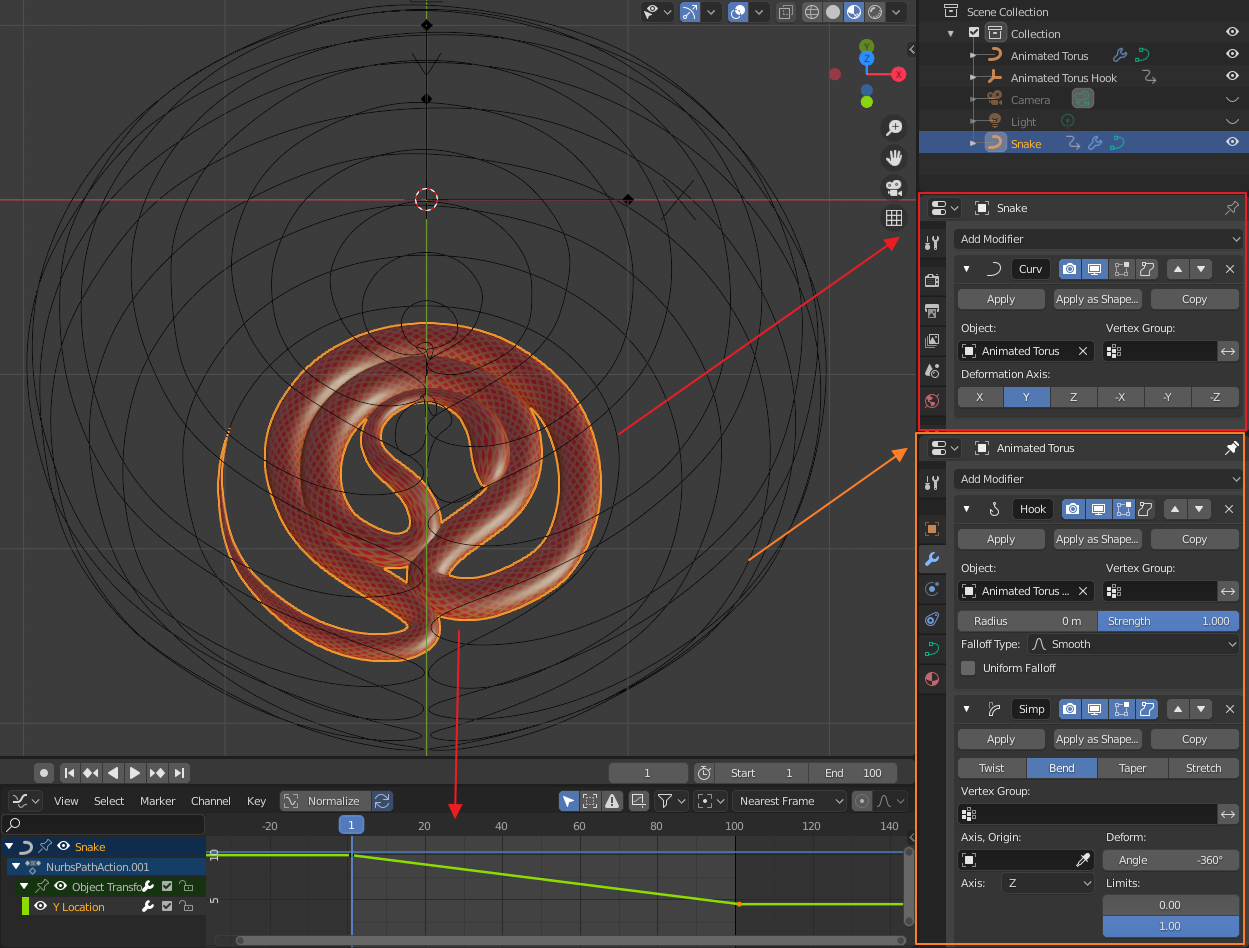 I am not sure what is the name of this curve, let's say it is some sort of a spiral. Again it is a pre-modeled open curve shape that looks like this: 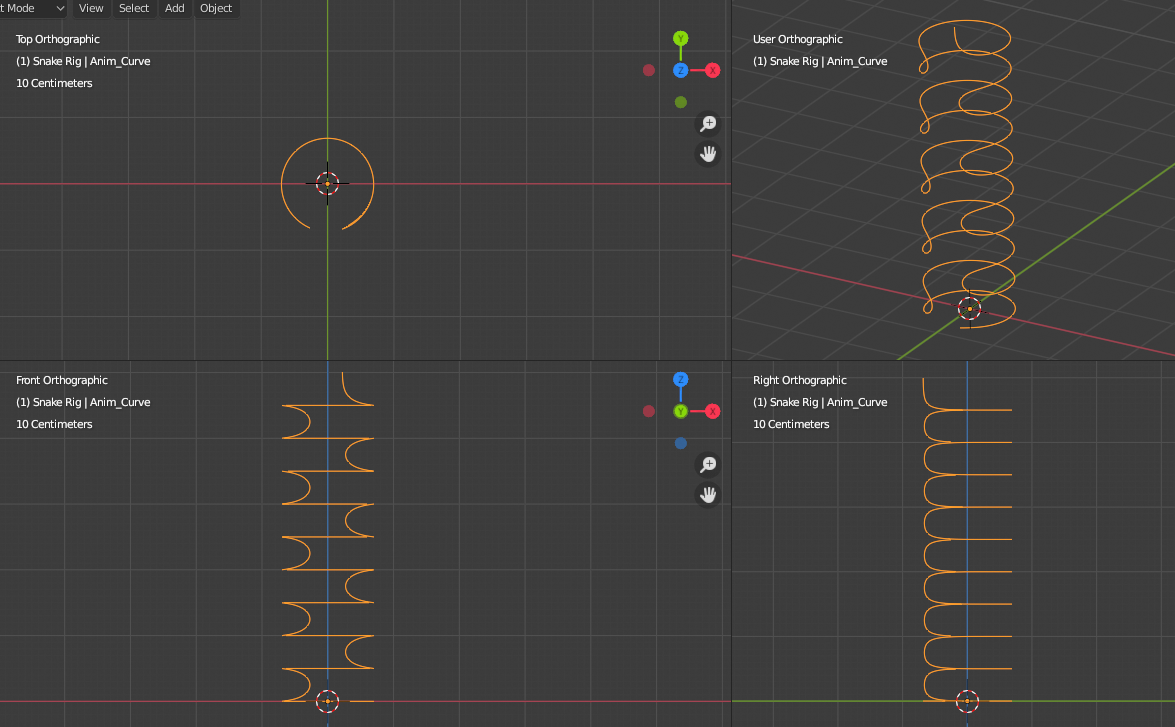 The lattice is shown in final state. It was deformed to flat shape in Edit mode in two steps: 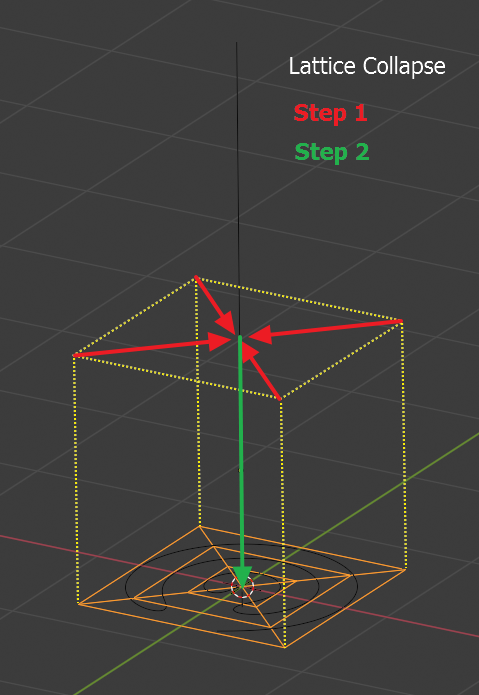 The snake (NURBS curve) object uses that curve as deformation modifier and was animated similarly to the first variant so it stays in place. Here is the result that can be modified further by adding more curve loops and resolution to the lattice: 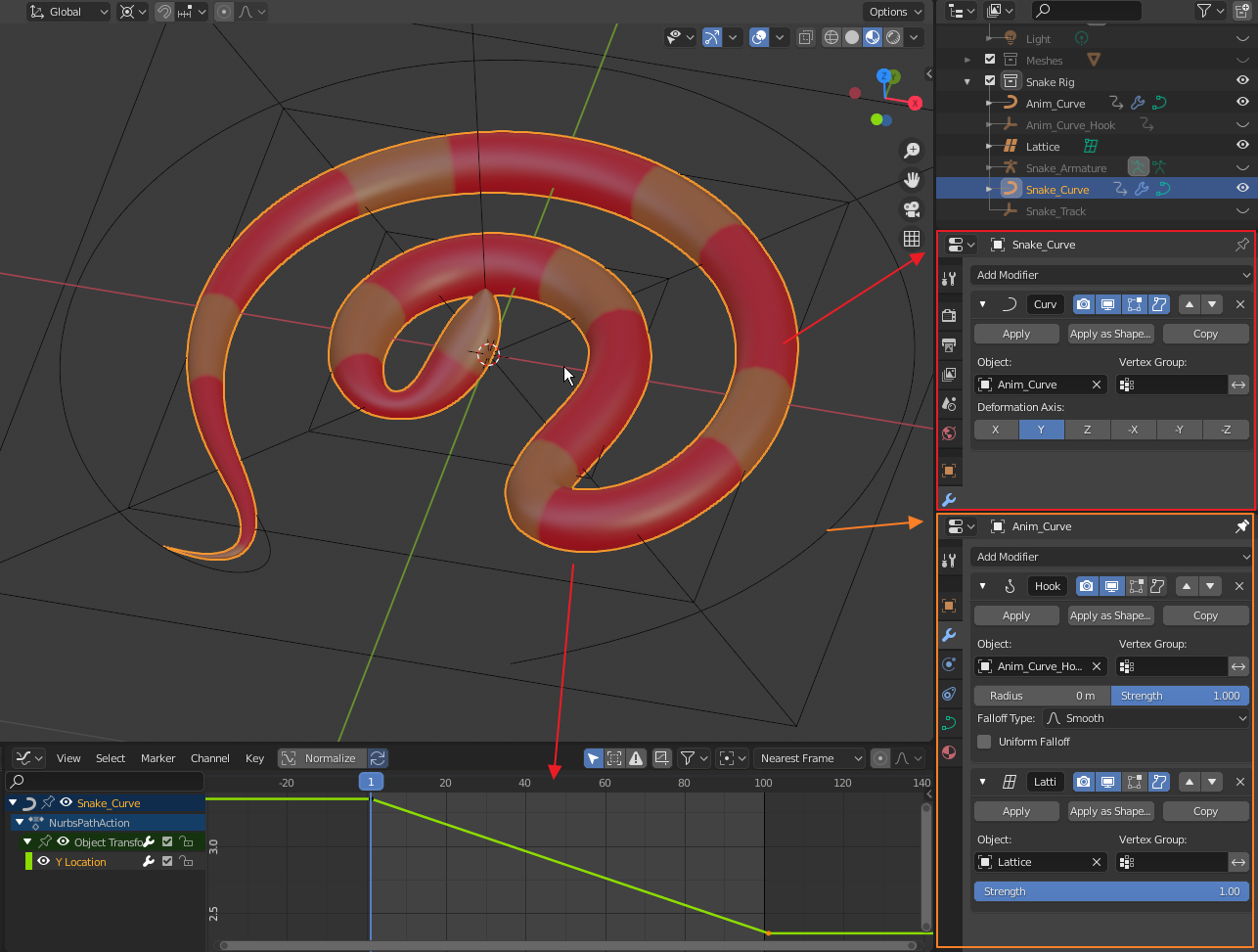 The body animation seems nice but the problem with the head part is the same as in the variant A. The head is fixed, looking up and wobbling.

Here is a solution: We are using a curve for the body deformation. This curve can be a basis for a Spline IK constraint of an Armature. The armature rig is split in two - body and head. The body bones are part of the Spline IK constraint, while the head bone is targeting an Empty.

Blend files for your own study:

Pros: Solves the "pinching" of the body. Very lightweight. No texture distortion ("worm effect"). Adjustable shapes. Cons: The curve tilt may cause some body rotation which is visible with more complex textures. It also affects the bone rotations in the Spline IK chain.

I wanted to come up with Lattice version, because there is not a way to adjust wave shape inside modifier in a shape I would like to. With Lattice deformer it is possible in some limited way, also with lattice you can completely fix snake's head position ... the biggest issue here is material.

The biggest issue is shader that calculates texture coordinates before lattice ...

Here is a modified and optimized version of the vklidu's approach. It differs by replacing the Wave modifier with Displacement modifier.

For the Surface Deform object I start with a straight line of connected vertices alnog Y axis and making sure there is bigger vertex density at the "tail" section. I add all vertices to a vertex group which will control the displacement effect. Also added an Empty object at the "head" section to be used for the vertex group modification using the Vertex Weight Proximity Modifier.

I add Wave_Animation_Control Empty which will control the displacement texture and its animation. Rotating the Empty 45 degrees along Y axis gives good alignment of the texture with the Surface_Deform object The Texture is parametric Wood Sine texture which gives nice symmetric sine waves. The Color Ramp is enabled to take advantage of the Ease interpolation for more round/flat crests of the waves. That helps with the pointiness of the snake's body bending points. 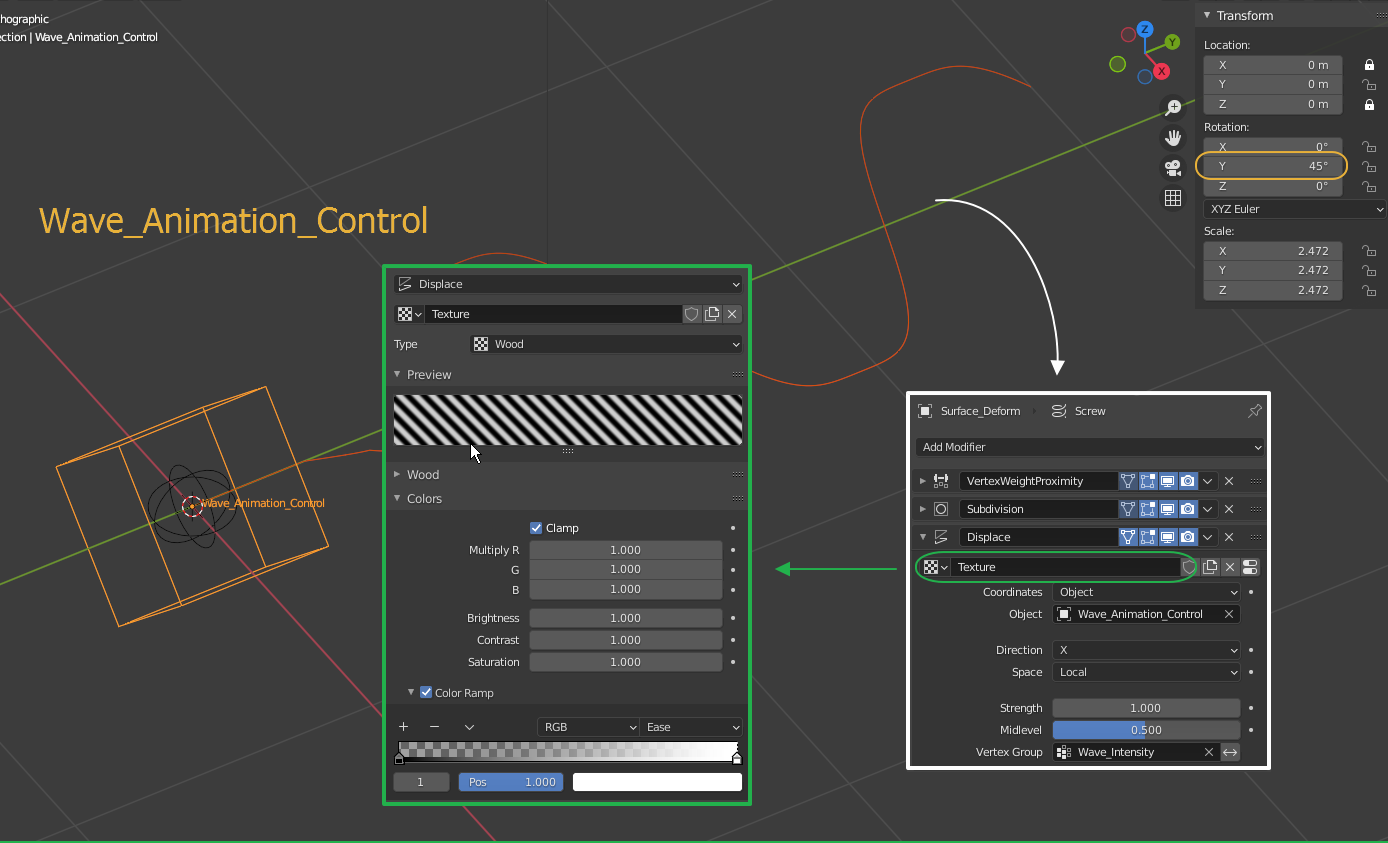 Lastly I add the Simple Deform modifier and a Screw modifier to generate a polygonal surface to be used in the surface deformation (see below). At this point you can test the animation by moving the Wave_Animation_Control along the Y axis. 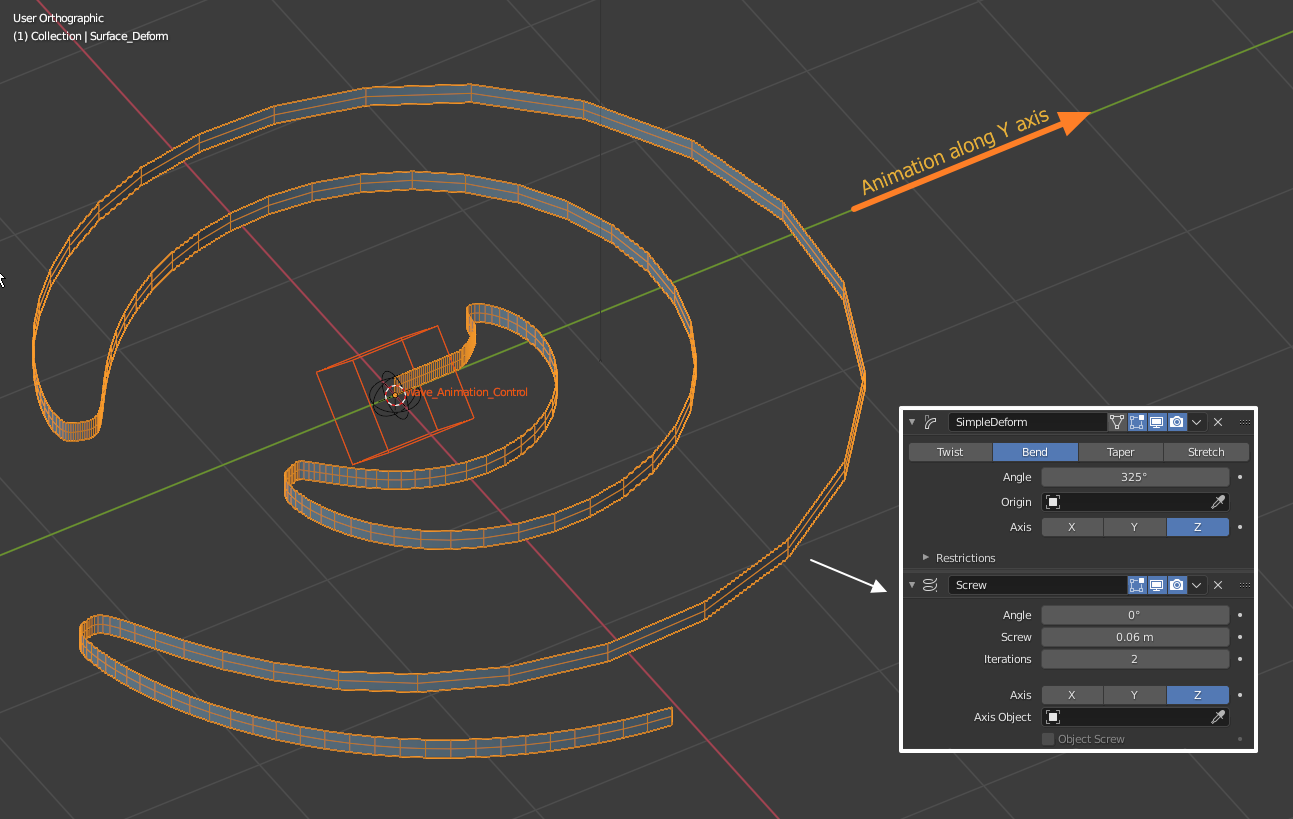 Here is a set up of the Snake object using only modifiers. One could try with a realistic snake model. The important part is to Y-scale (squish) the snakes body to the length of the Surface_Deform object or less. The most important modifier in the snake's model is the Surface Deform modifier. Before binding both meshes, make sure to disable the deforming modifiers as shown below. 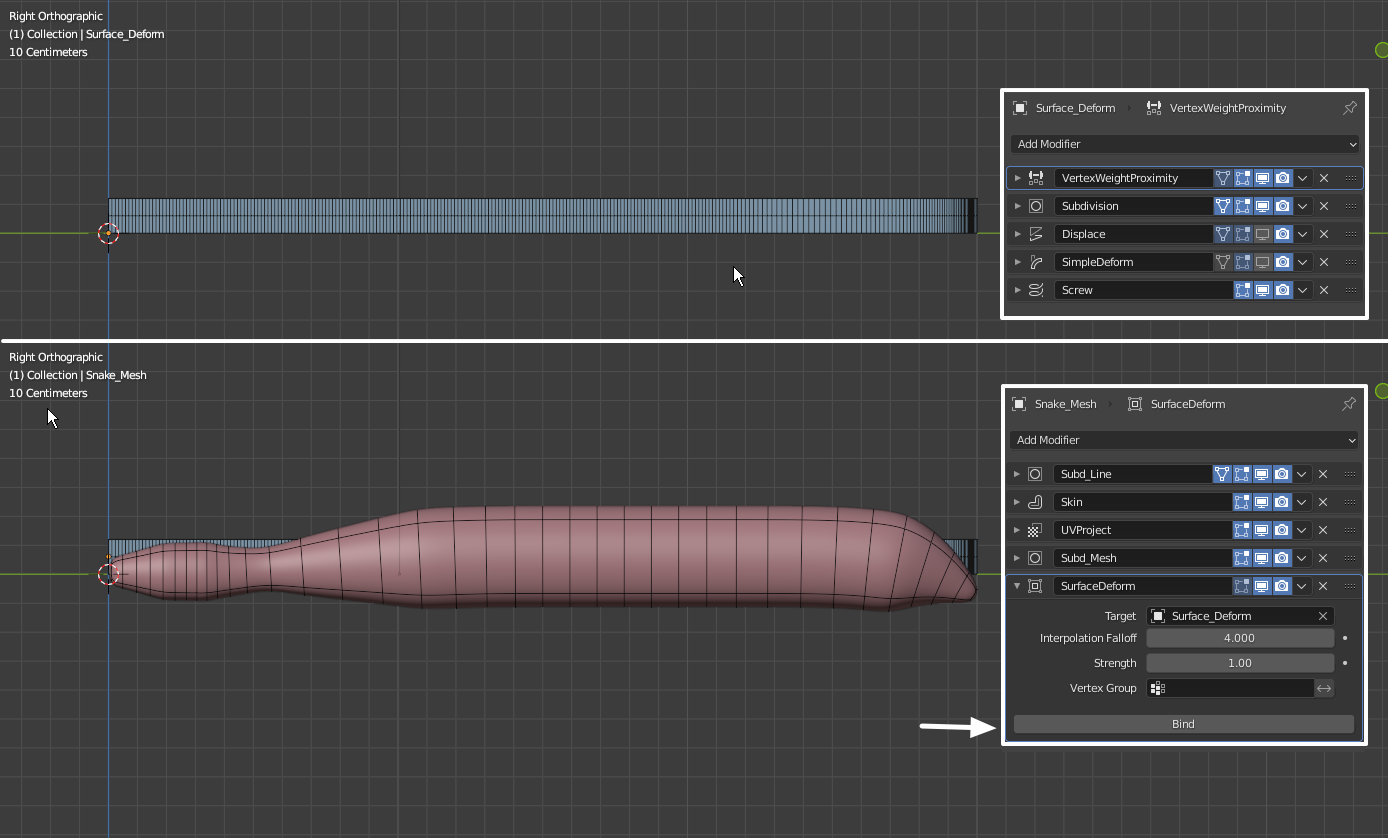 After the binding you can enable the remaining of the SurfaceDeform object modifiers. The result: 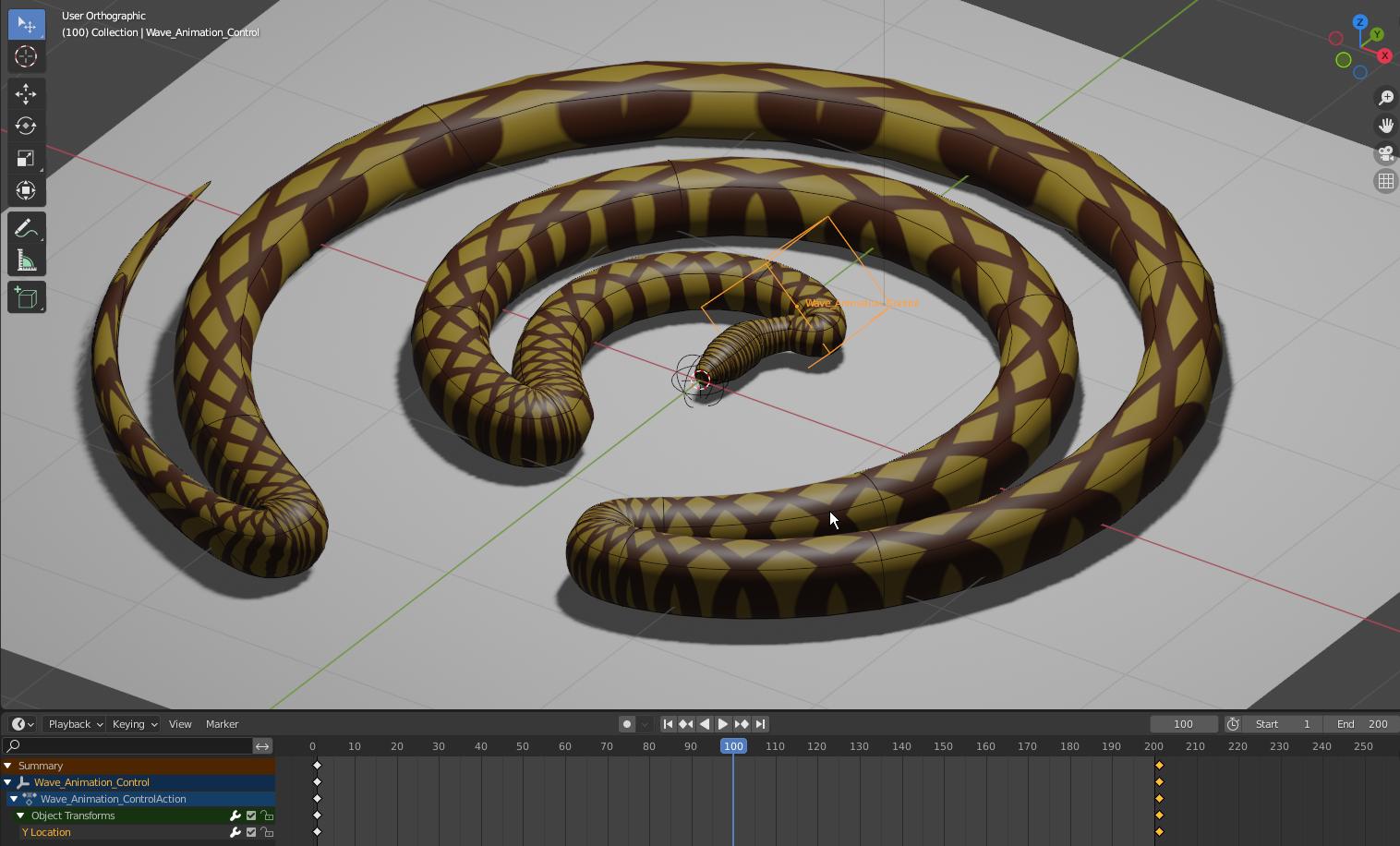 I also did a Lattice Deform version which gives additional control over the waves spacing: 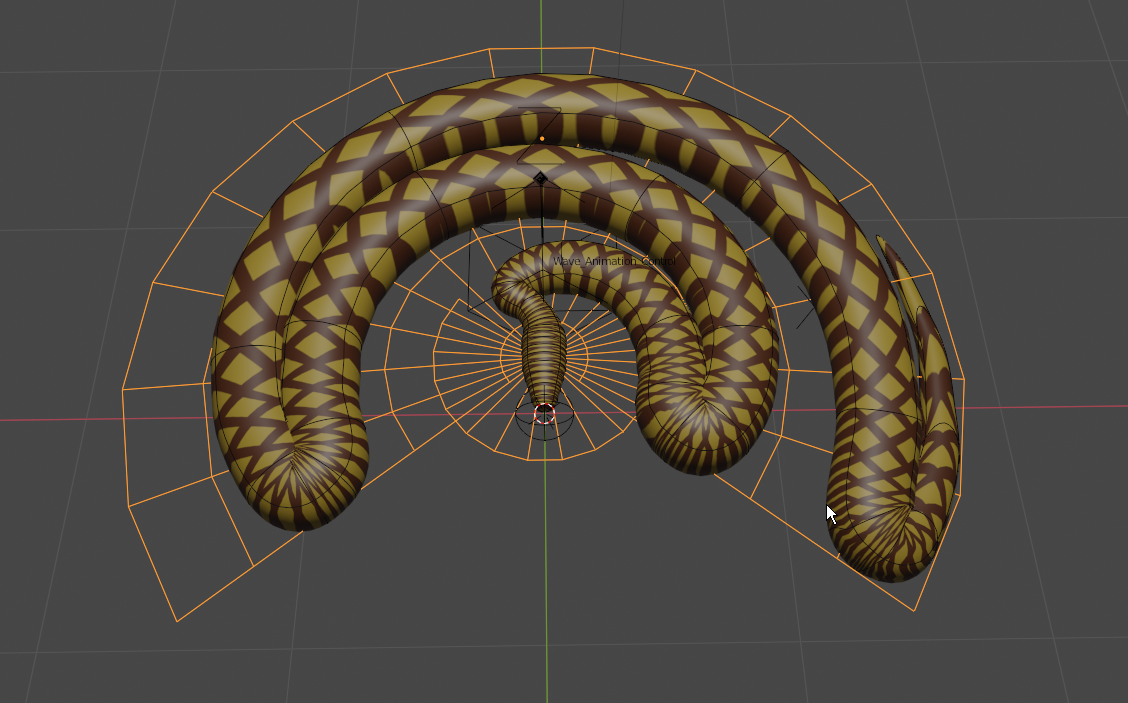 the blend file is here:

Both set-up give better real-time responsiveness than the previous solutions.

The cons of these solutions is that the Snake's body is too squishy when moving, which can be seen with the texture enabled. It is more worm-like than a rigid snake body. Having a Curve to keep the snake's body unchanged in length is preferable in my opinion. 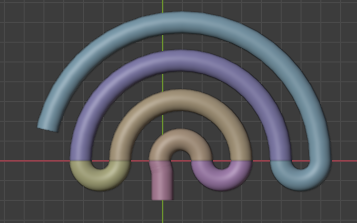 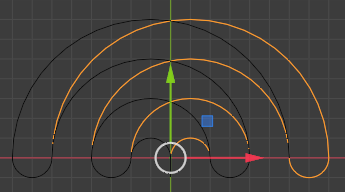 Path follow it, the effect is mainly that the texture of the snake is small in size, so the movement over the path causes the effect, you might even animate the path a bit

another way to do it would be through a mesh deform modifier with a mesh of the curvature ( partly (using empty bindings)).

the problem here would be to overcome stretching, so you get chain alike constructs (empties with distance restrictions)..

I think there are a few solutions possible this way, though they take some time to configure, (currently dont have that time to create a demo file).

10
Make path move like snake in snake game
1
Get/display the animation runtime fps in python
1
Display object only in certain animation
1
How to make an interactive two-finger robot gripper and grab things with it?
8
Line of Bones to Travel and Conform to Curve (Train or snake following path)
2
2.8 Duplicates along curve but with animation
1
How to display Alembic "Override Frame" animation in the animation graph?
1
Creating snake scale] any way to work with Array modifier with Bezier curve without stretching the mesh?