What exactly is the intuition and a logical way of thinking about how ColorRamp node works to 'distribute' its input?

Though I have been using the ColorRamp node for quite a while, I often trial and error moving the handles in the ColorRamp node around to get my desired effect. I realized that I didn't really have any intuition about how it worked, I just 'did' things until it worked the way I wanted it to. I figured its best I try to think about what it 'logically' does behind the scenes, but I can't quite understand 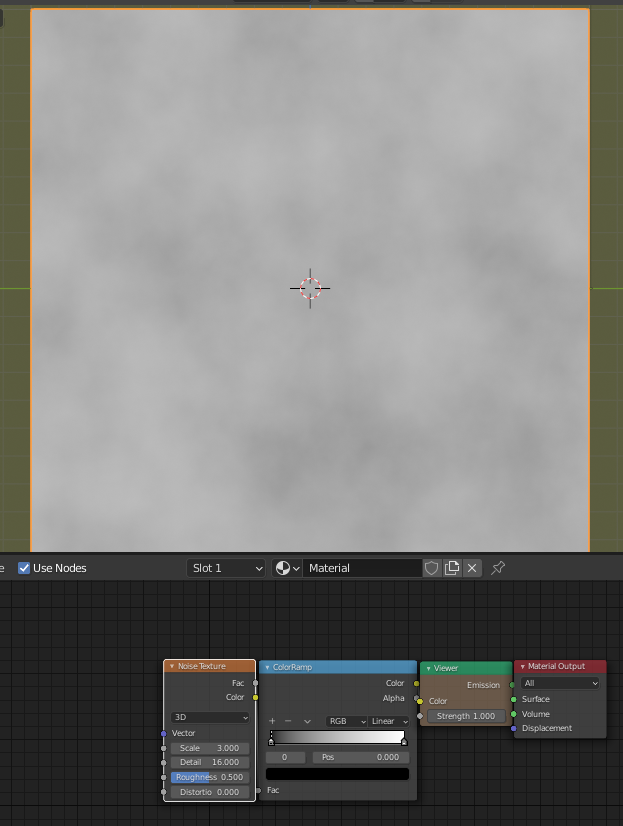 Here this is equivalent to plugging the Noise Node directly into the Material Output/Viewer. I understand the Noise Texture is a psuedorandom texture that is PURELY greyscale, that is colors can be black, white or anything in between 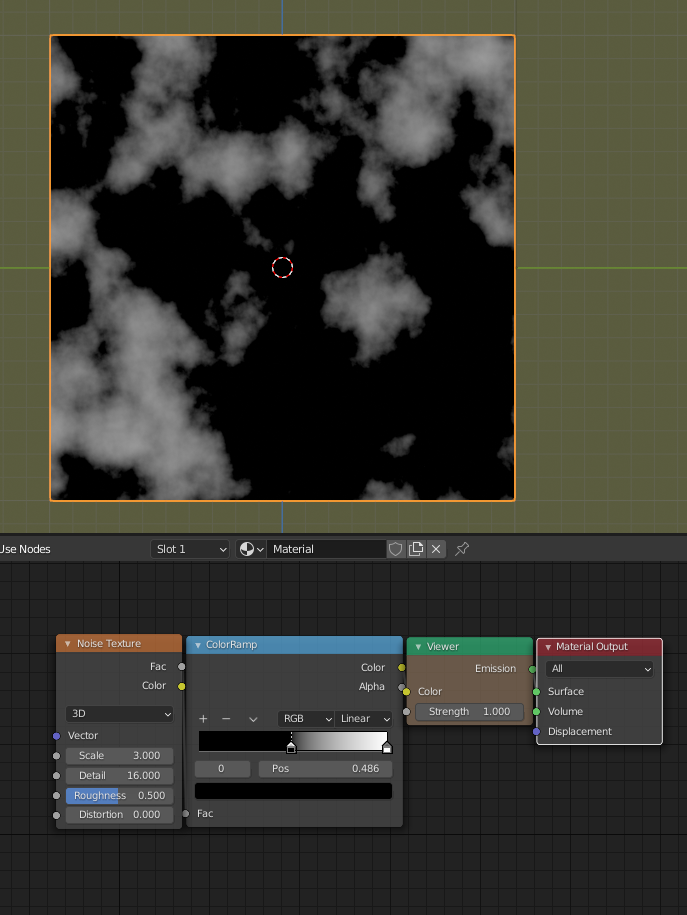 I assume it is different here. From what I believe, this setting of the ColorRamp handles basically mean: "Since the lefthandside of the ColorRamp 'strip of colors' is wholly black, this means that any colors in the Noise texture that is darker than grey (since I assume grey is in the middle of black and white, and the black color handle here is right in the middle) are to be treated as completely black" 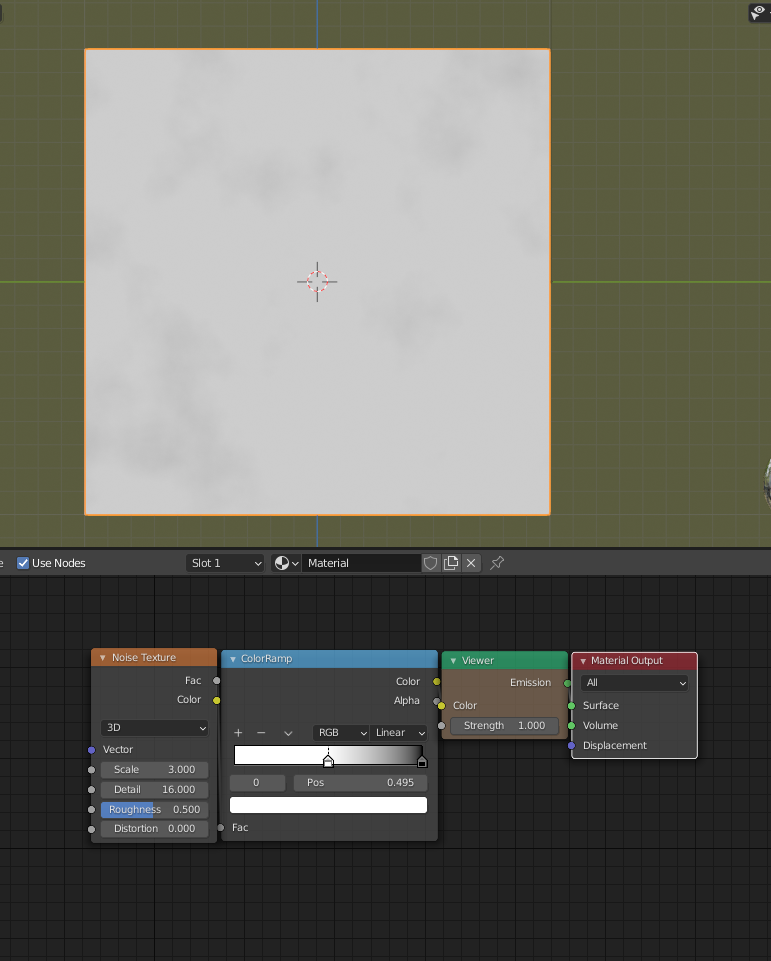 I assume its the same as before but flipped. Anything LIGHTER than grey from the noise texture is outputted as completely white, though I am confused, since they look more grey than white to me

However, this one confuses me: 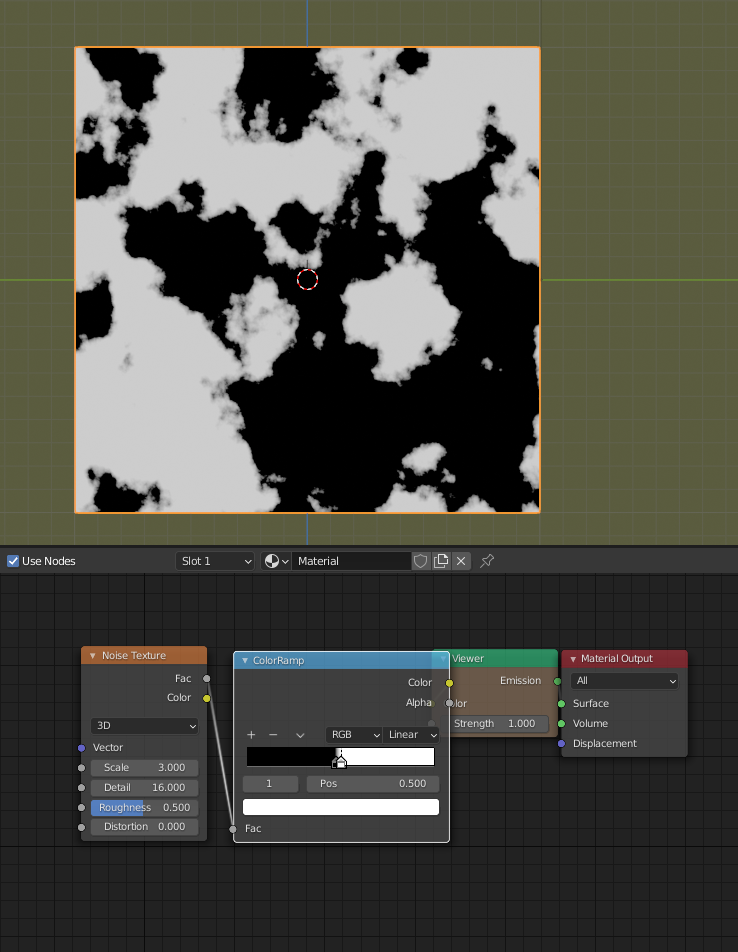 Finally, using it with a MixShader: 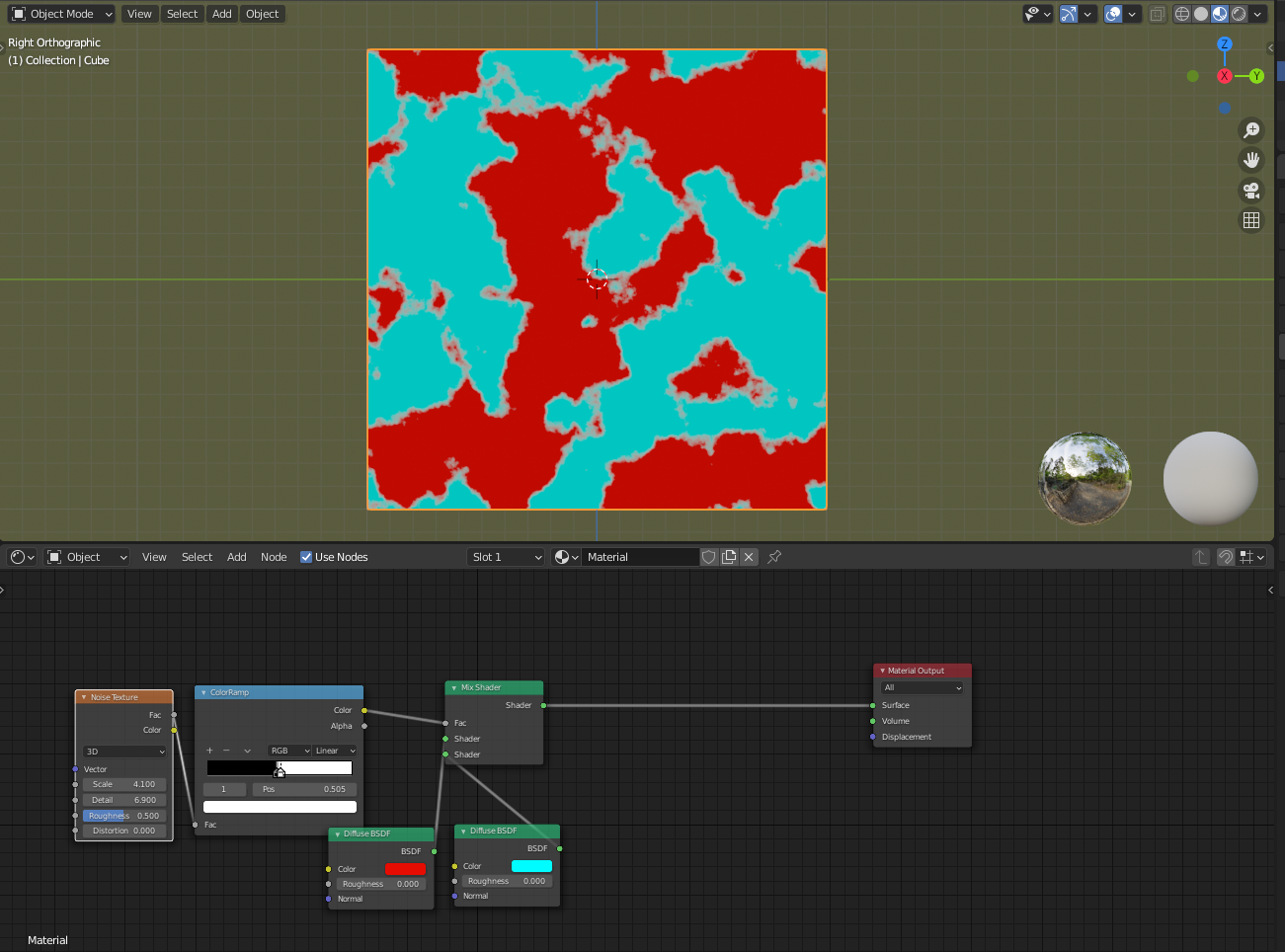 How does this work at all? From my limited intuition, this basically means where there is black on the Noise Texture, shade that area with Red, where there is white shade with Blue, but what about once again the tiny gap down the middle? What's it do here exactly?

All that being said, what exactly am I getting wrong with my intuitions of the various ColorRamp settings, what am I not understanding here? 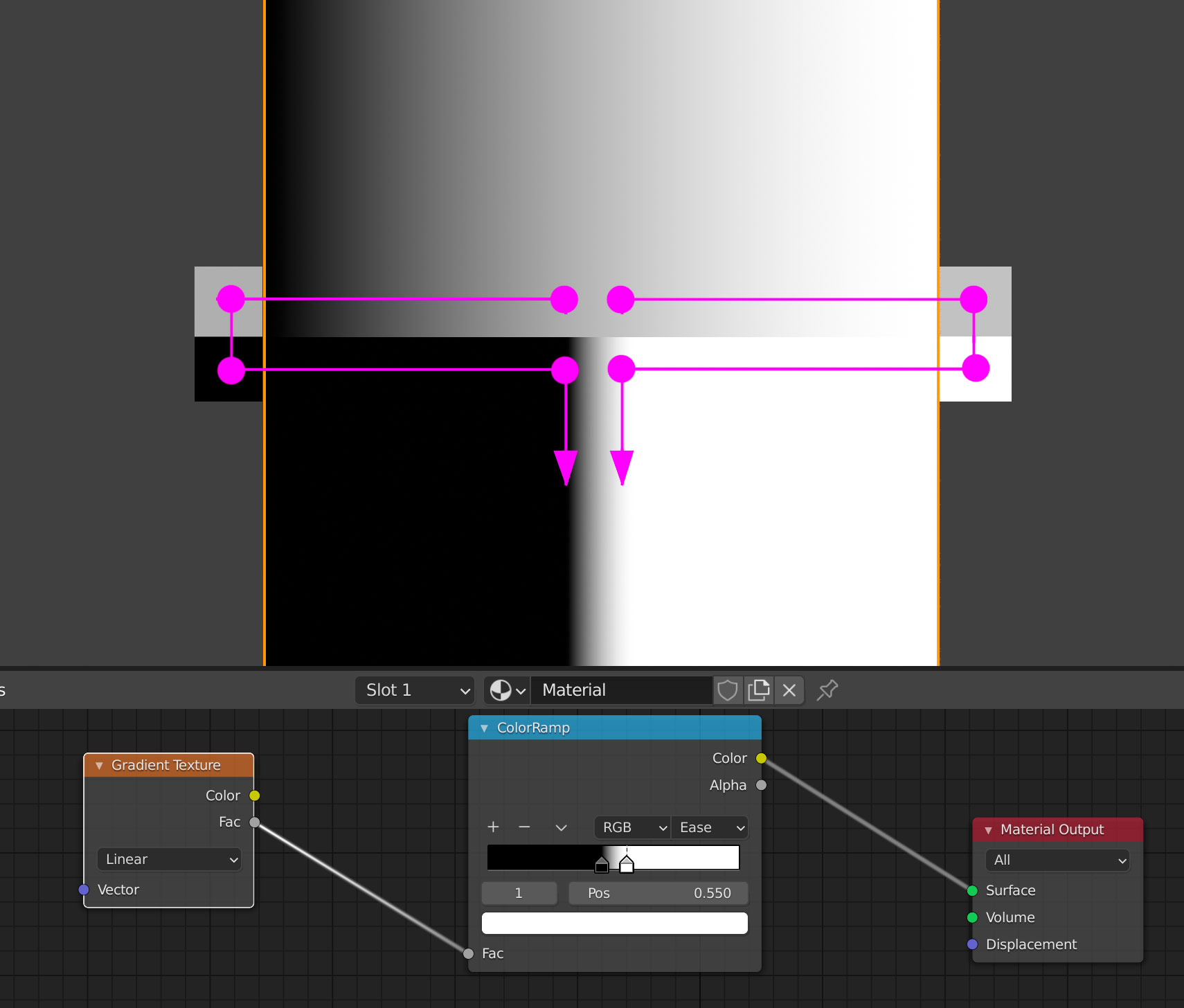 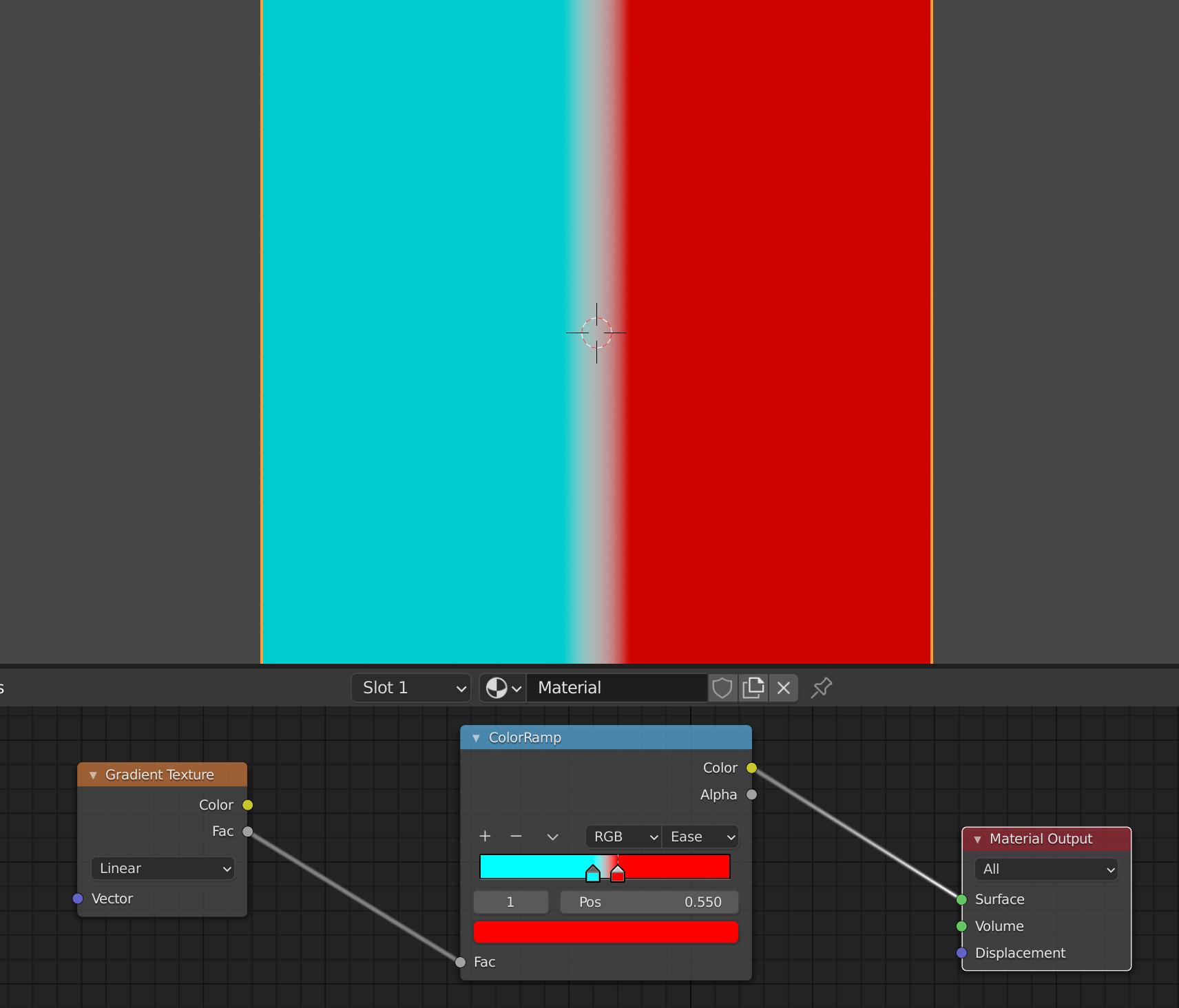 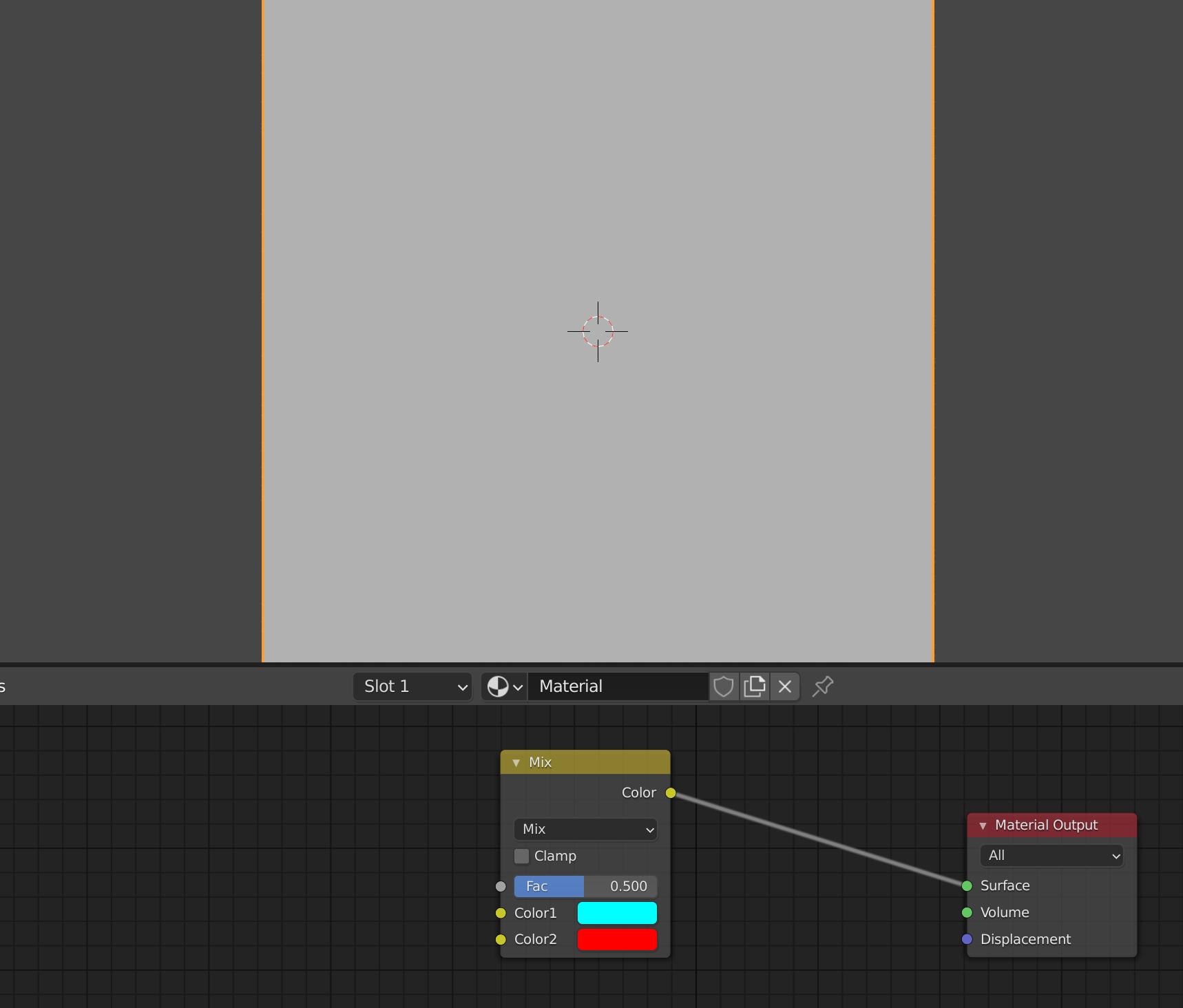 The input to a color ramp is not a color. You can feed it the output of a color node, but internally it converts that into a single number. [If you feed it a color it computes the luminance of that color and uses it.]

In your examples, you aren't feeding a color to the color ramp, because you are feeding it the Fac output of the noise texture, by the way. Noise textures do produce color.

The handles have nothing to do with this part of the process, nor does Blender's color management. Intuitively it is a lookup table: go to the position on the line that matches fac, and return the color that's there. 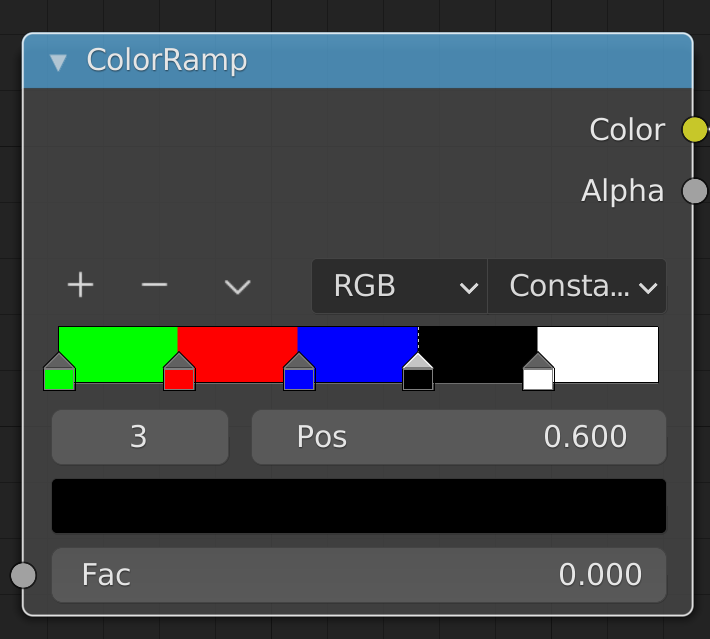 Here's the output of a noise texture plugged into the above color ramp: 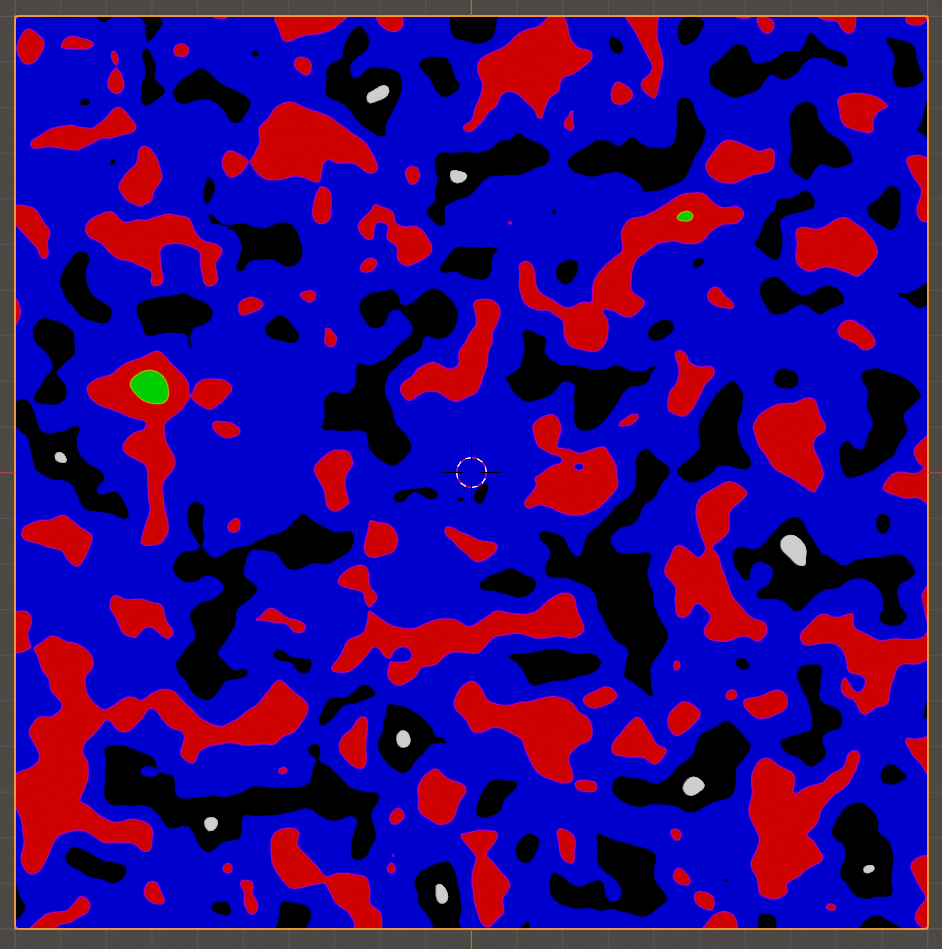 This is where the handles come into play. Rather than having you create a color for every possible position on the ramp, Blender interpolates between values using mathematical formula. The start and end values are set by the handles, and the interpolation method is set by the control that is set to Linear by default: 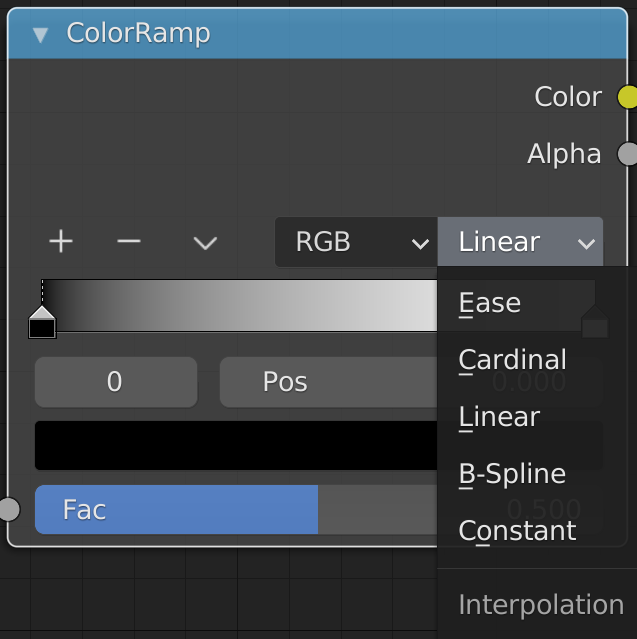 There are several ways to interpolate colors between handles, and I won't go into details.

What do the gaps mean?

They mean whatever the interpolation mode tells them to mean. In your example, you are using linear interpolation, so the range between black and white is evenly distributed between the two handles, gradually going from black to white. In my example above, the range is constant.

What about using it as the factor in a mix shader?

Since the color ramp node outputs a color, but the mix shader uses a number, the mix shader internally converts the 3 numbers that make up the color value into a single number in the range of 0 to 1. It then performs its mix operation as usual.

Going step by step through your node setup:

First Blender compiles your node setup to a shader and uploads it to the GPU. The compiled shader could (I don't know the actual algorithm) convert the nodes to functions in the order marked on the screenshot. Then for each lightray hit in Cycles or each pixel in Eevee, whole shader program will be run which in Python [in reality GLSL is used] would look something like this:

Someone correct me if this is wrong but you said;

As a response, I'll try and break it down the best I can but the Noise node added that cloudy looking effect to it. Obviously, it's made up of the selected colour of handle 0 and 1 along with every colour in between. 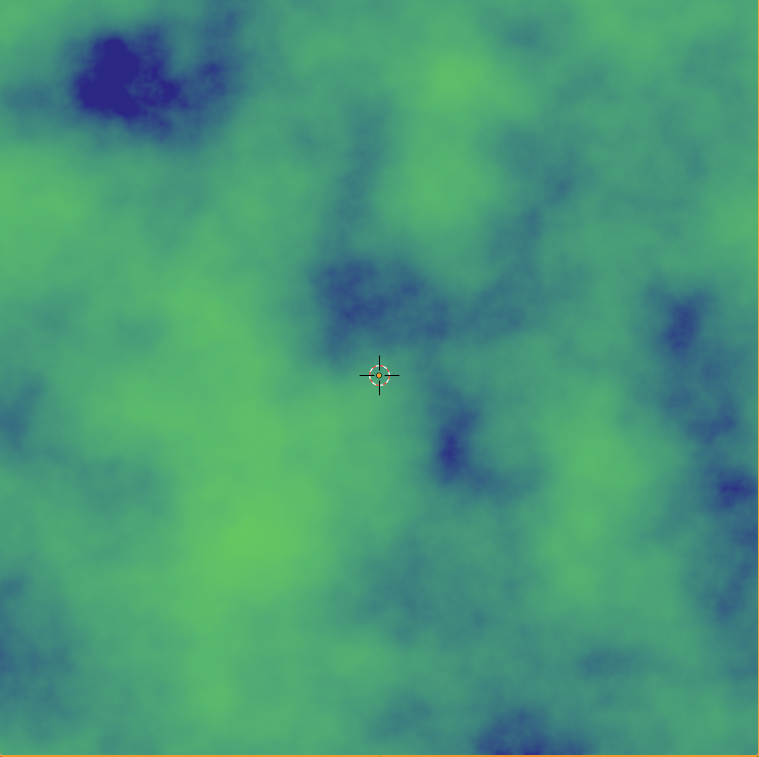 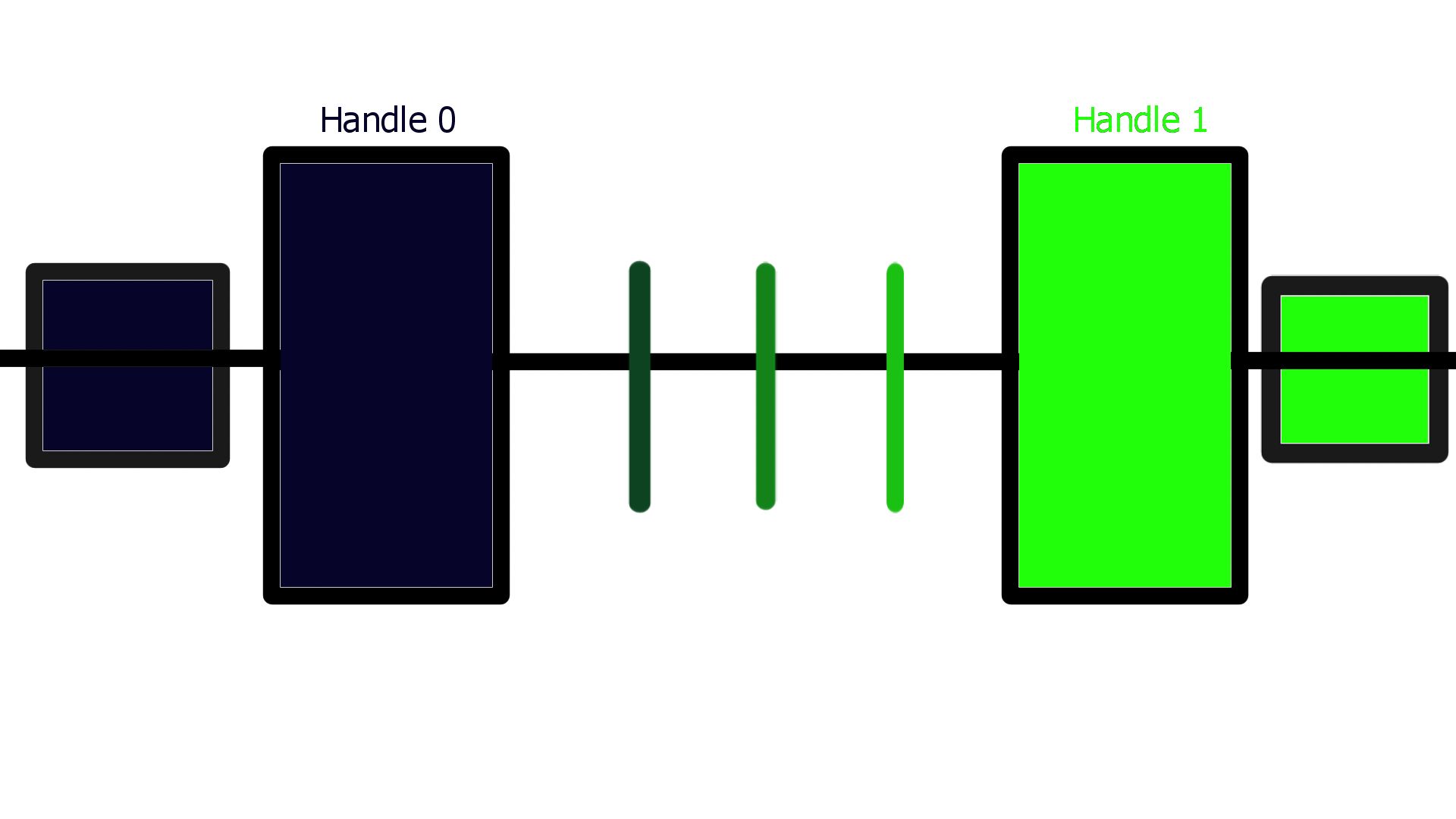 Ignoring how scuffed this looks blender adds the colour in between as a gradient while like you said outside of the handles is the associated colour and then we can push those handles super close together. In doing this we effectively removing the gradient replacing it with just two colours: 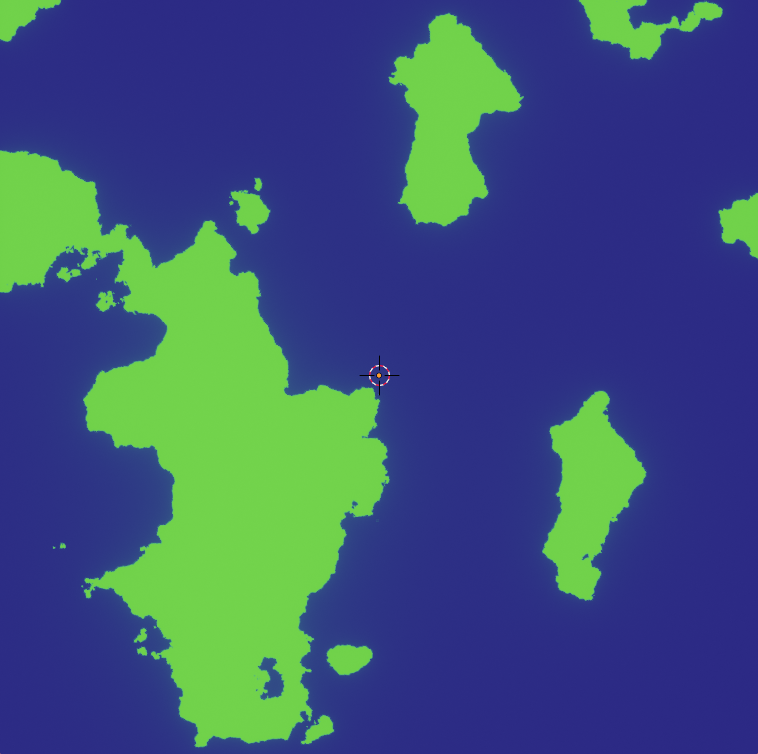 We can also remove this gradient by changing how the colour ramp works. If you look above the colour ramp (still on the node just next to the RGB drop-down) there is another drop-down that often will be set to Linear. Setting this to Constant we see that everything before and after handle 0 is the selected colour until it reaches handle 1 and it will then change to that colour and continue to the end of the ramp.

(I cant put in another link but it is identical, trust me ;)

Giving us the same result!

Finally on the mix shader with red and blue controlled by the colour ramp;

You have two colours one being red this goes into the mix-shader. If the mix shaders Fac is set to a value of 0 it whill show red.

Now if we set the value to 1 it will turn blue. 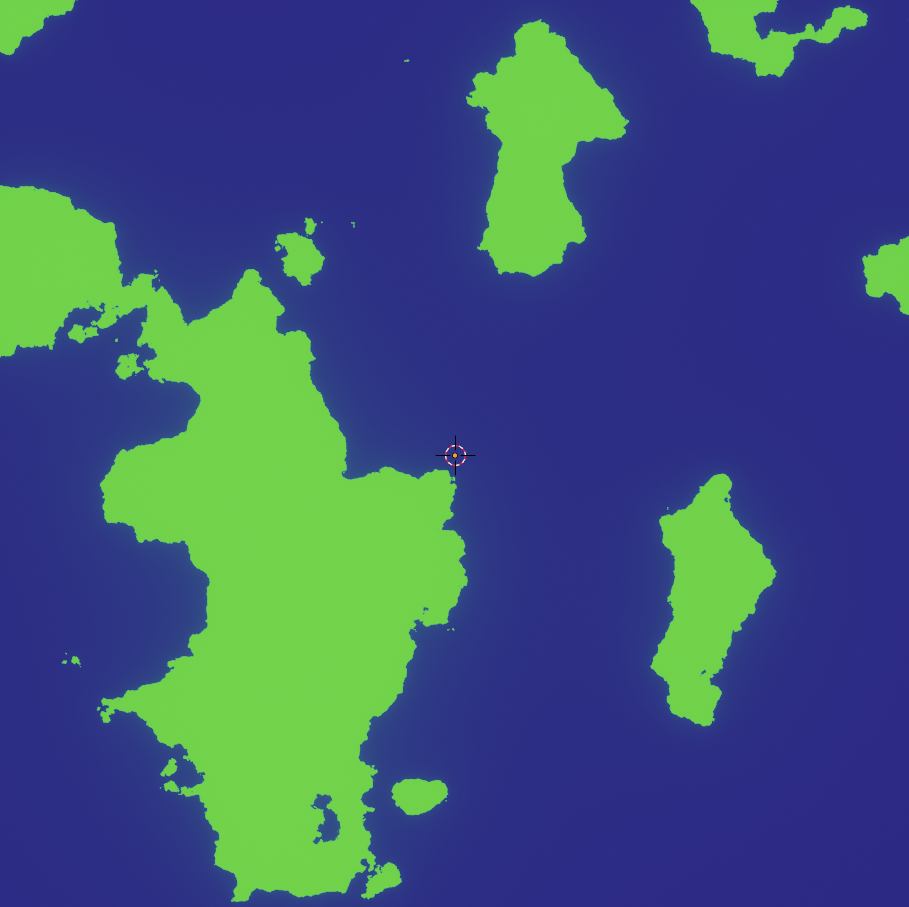 This again gives us the same picture as before (red and blue where altered to the blue and green from above). I didn't dile in the exct same results as before so it looks a tiny bit diffrent at some parts but it does the same thing in this context. 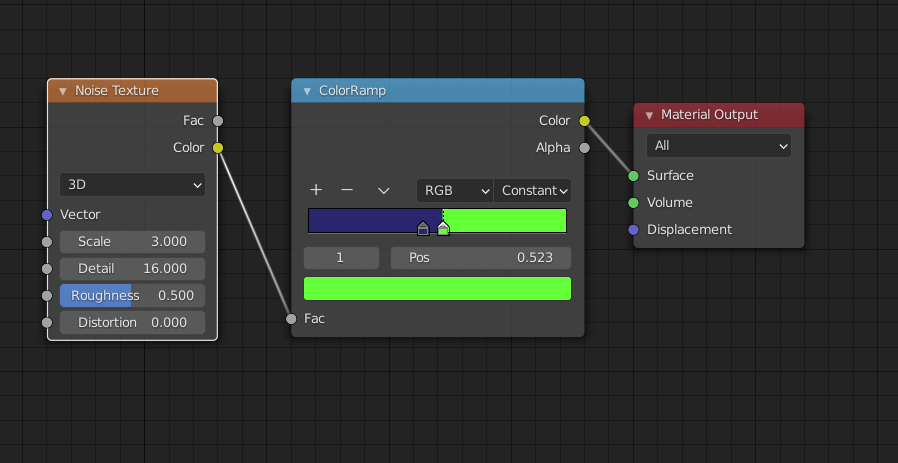 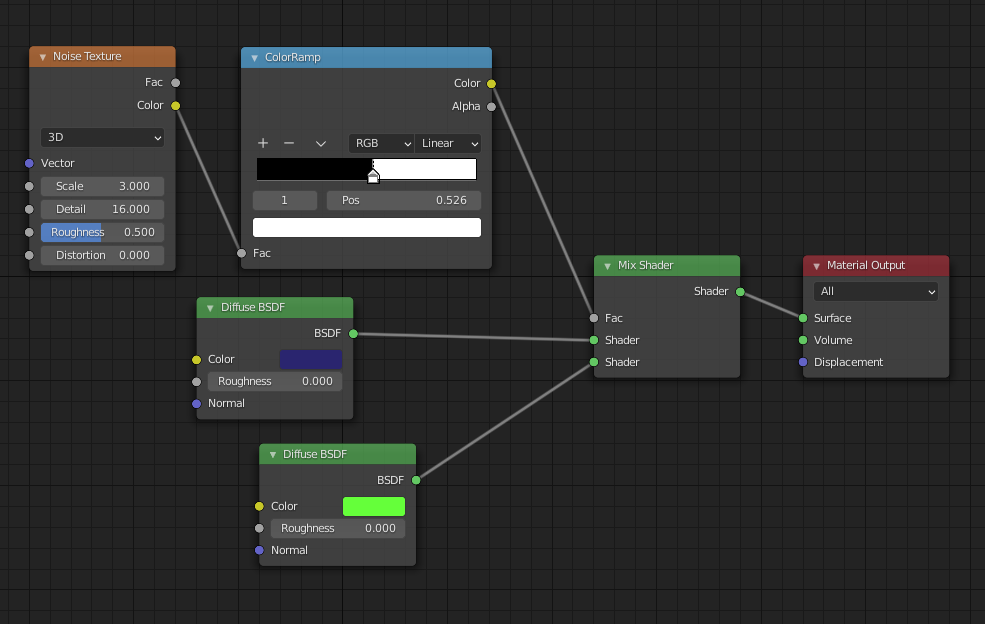 I hope that wasn't condecending but I tried to make it simple for everyone! I also hope that made sense

PS. I think that going straight from a mix-shader into the output will make it dark, to fix this I think you can just chuck in principle BSDF or something similar (not 100% sure on that).

21
How to add golden line to my maps?

7
Repeat a generated texture in Cycles?
7
What exactly does the Normal node do?
7
Brick texture with multiple colors
1
How do I use a map or node as a mask?
3
Is there a way to combine colors in blender?
0
Color into Alpha - Nodes and Vertex Paint
2
Math Sine Node not working as expected?
1
Having Issues with Volumetric Fog