While animating something recently, I've come across something I've never seen before. I had just finished the following animation, and since I had used the spring bones plugin to simulate the hat physics, I planned on baking the entire animation with visual keying. After doing so, the animation looks like this (notice how the IK was not baked properly). Any ideas why this is the case? Just to clarify, yes every bone was baked, all are keyframed in the action, the only differences between the first and second gif are that it was baked and that the constraints are no longer active on the latter, no other changes. 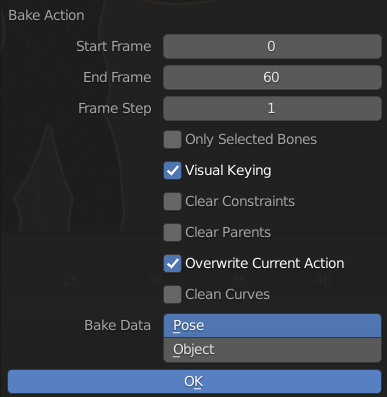 here is the blender file containing the animation: https://www.dropbox.com/s/ad3nqj24xmeda4b/MonsterIdle.blend?dl=0

Once you clear the scale on Root and delete its scale keyframes, the bake comes out exactly the same as this modified animation. However, if you've built your animation around Root's scale, it might not be exactly what you want. You may have to edit your animation slightly.

Not the answer you're looking for? Browse other questions tagged animation keyframes baking constraints inverse-kinematics or ask your own question.