Performance ?, which is better, taking a 4k image and splitting it up, or using material with full 4k image and changing the texture coords?

I have read variations of this question in the past, but often times those questions had more to do with how to also split up a model, and this variation does not.

I have a set of 4k PBR textures (Albedo, displacement, normal, roughness) for a single map for a rock texture. I want to make 64 individual rock objects. The plan is to have each object get it's own slice of the large texture on a grid on the texture. Each object gets a texture space of 512x512. I will have to make 64 materials for this.

My question is, is it better to slice up all of the images ahead of time, and have the variations each with their own set of images OR is it better to make 64 materials, each one using the exact same single set of 4k images, and use the the texture mapping + coordinate nodes to control the offset. In the second scenario I would have to shrink the UV down to fit 512x512, but that should be doable.

My initial theory is that it would be better to use the mapping nodes for control? But I don't really have any strong data or understanding to back that up.

I have a feeling Nathan is right that this is irrelevant to the performance, however it could very much be the opposite: I remember when I had a project with a UV sphere displaying a different video on each face. When rendering a test animation, most of the time of the renders was taken by loading the video files on each frame. However, would a single higher resolution movie work better in this case, probably not... However, there might be various optimizations in Blender that make one work better than the other, so...

I created a plane, and added a texture node, with color grid texture in 16K resolution. Subdivided the plane with 7 cuts, twice, so that each face is associated with 4 titled squares. Separated all those faces as individual objects, made some random transformations and a 60 frame animation: 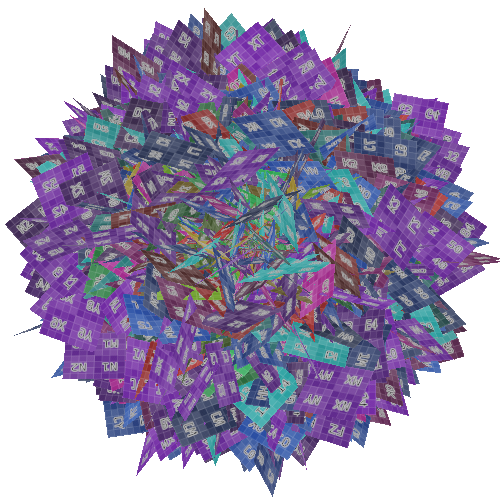 Using Eevee, samples: 1, 500x500 resolution, Image Texture directly connected to shader output, to make it as light as possible to only measure the actual performance of loading the big image or small images.

After making first test with this setup, I reset all UVs, added mapping to the material:

Then I used a script to separate the materials and use the mapping to position each plane on a different coordinate without using UV:

Rendered the animation again and it took twice as long now, evidently the 8 seconds needed at first, now was needed just to prepare for the first frame - but once that rendered, the rest went smoothly, because apparently Blender cached that data.

Now in order to divide the image to many images, I used this node setup:

Reverting the test file back to the situation with a single material, removing the Mapping node, and applying this script:

I experienced more UI lags then on previous test. But rendering took a second or two less, but I used a faster SSD, so with all this slopiness, I decided to be a little more rigorous and repeated those tests 3 times per each technique, each on the faster SSD with a measurement error of +/- 0.5 s, starting a stopwatch at the same time as pressing CtrlF12 and stopping it as soon as I see Frame: 60 in the render window:

So out of the 2 last options the OP considers, the 2nd option (single image file) seems better. UI is more responsive in my experience, it renders faster, it's easier to work with. However, what comes to mind is that perhaps if some of your scenes don't use entire texture, dividing the texture may make it easier to render or to work with your file because thanks to that Blender will load only those parts that are needed.

It's very important though that you consider what Jachym Michal said: not only using a single material was much faster than using many materials, it also allows you to put some kind of offsets (e.g. random offsets), and then, since your texture is not a tiled grid like the testing texture here, this could allow you for more variance, by having overlapping mappings but still different enough to not be perceived as the same rock.

Not the answer you're looking for? Browse other questions tagged texturing materials performance or ask your own question.

10
What is the easiest way to have a material randomize the Image textures it uses?
3
How to pass 2nd input through a muted node?

12
Different image textures for one material (Cycles)
1
What is the relationship between UV image and material texture?
0
Documentation on Materials and Textures
3
Rock PBR Texture Creation within Blender (Procedural) for export in game engines
1
UV mapping - multi-texture material shared by multiple meshes
2
Combining materials that already has UV coordinates
2
How to change a certain parameter of all principled shaders in my blend file?
0
Updating the texture image node using python