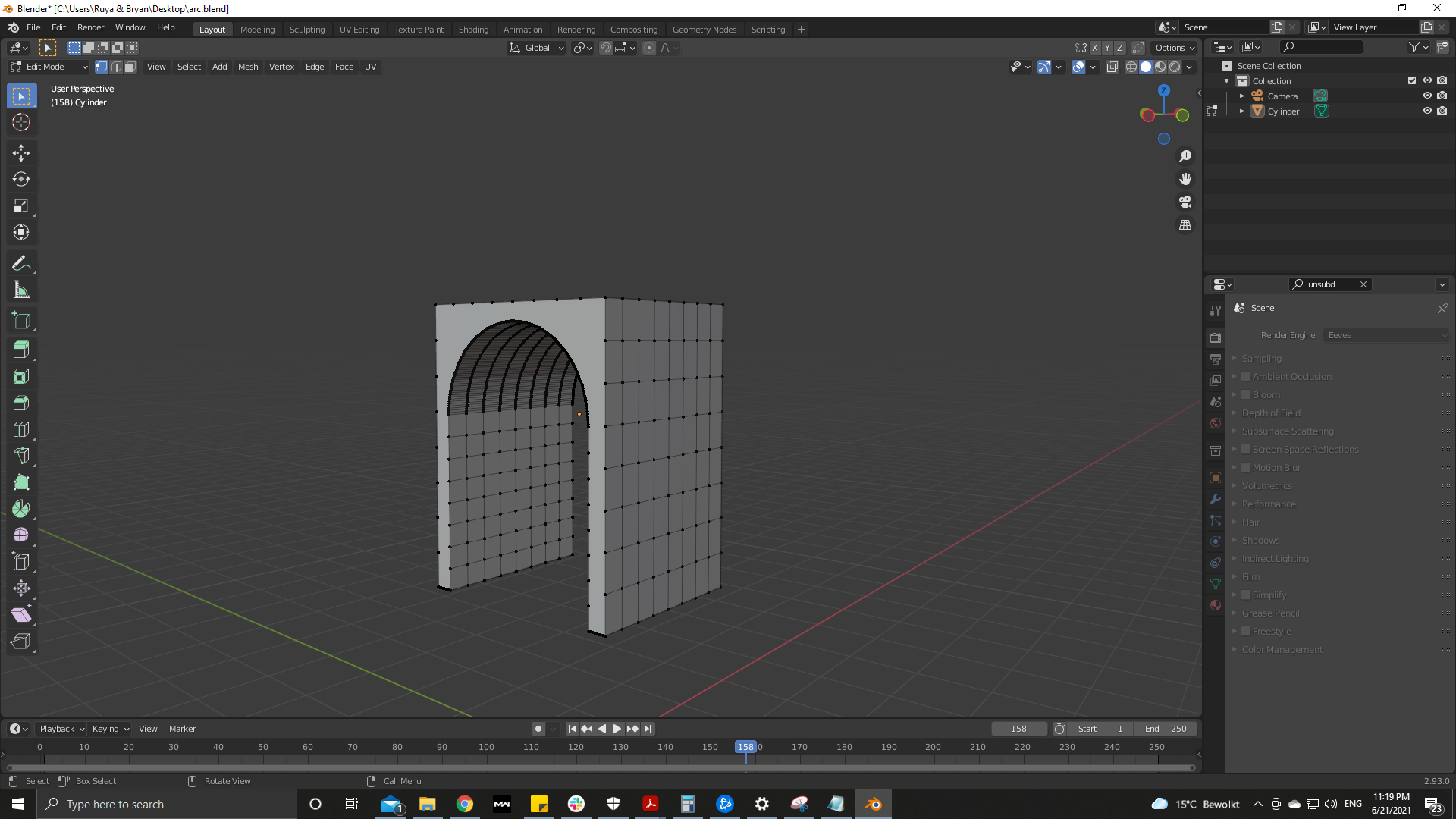 Sorry, I've gone a bit nuts, and this answer has turned into an essay. If you just want a suggestion on how to model your arch, jump to the TLDR, below.

These averages and interpolations may be weighted in various ways, but the principle remains the same.

The interpolated normals may be very different from the normals of the underlying geometry, yielding weird-looking results:

Behind your back, the renderers are doing this: 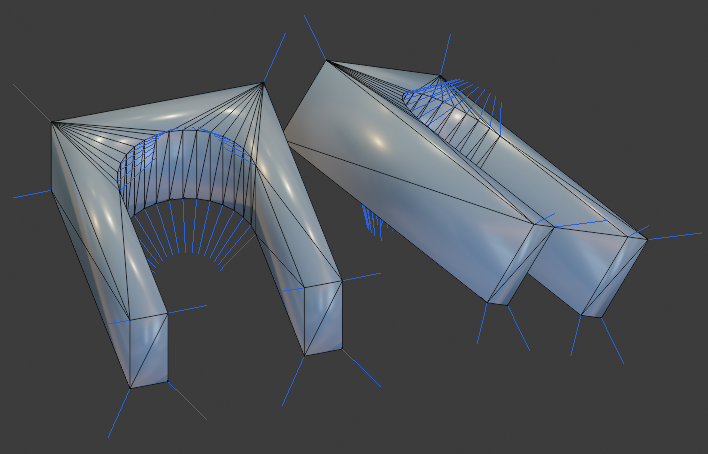 The illustration also shows the vertex-normals. As you can see, where faces meet at 90 degrees, the averaged vertex-normals stick out at 45 degrees. The shading normals are interpolated between those vertex-normals, across the triangles, which is not the same thing as the normals of the underlying faces, at all.

This is especially apparent when large, thin, triangles are interpolated across right-angles between faces. This is partly why N-gons are best avoided, except within entirely flat areas.

By switching on Autosmooth, in the object's Data tab, Normals panel, you can split the normals, per-face, preventing interpolation of normals where faces meet at greater than a threshold angle: 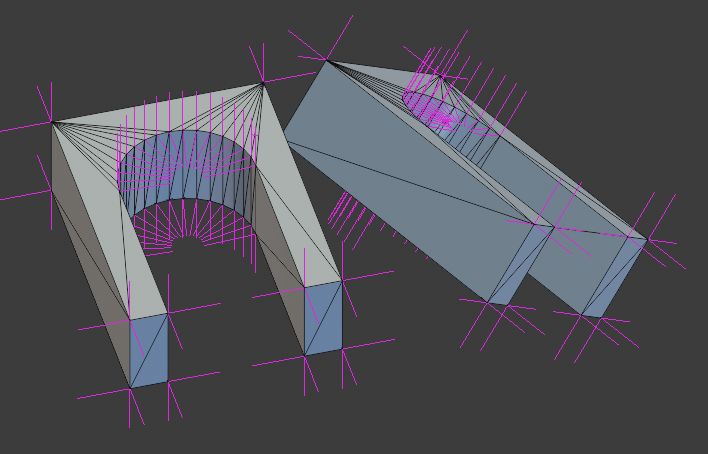 .. which can be an instant 'fix'. But the result can be unnaturally flat. (The material, here, is the same as the one in the previous illustration.)

The normal-interpolation is strictly between adjacent faces. So a Bevel can ease the interpolation of normals between large faces, by inserting small intermediate faces. If the profile of a 2-segment bevel is 1, (so the new faces are coplanar with the old ones) the interpolation is still between normals at right-angles, but restricted to the small bevelled area: 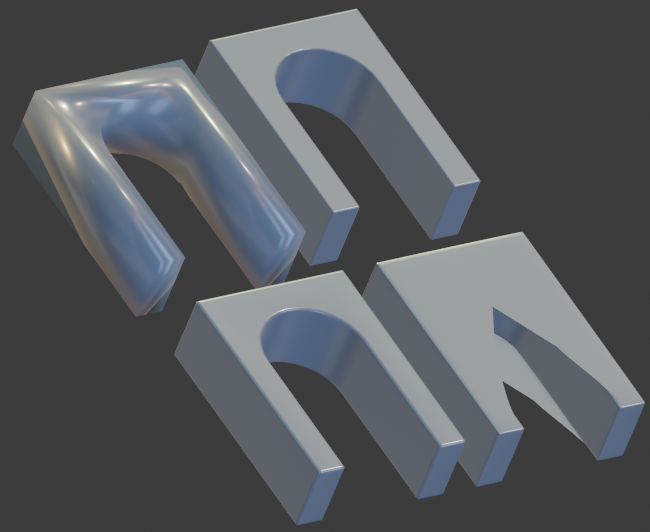 Making topology suitable for subdivision is another subject.. but a few rules of thumb:

To model this way, you need some sort of even transition from the semicircular arch to the rectangle that surrounds it. One possible route is this: 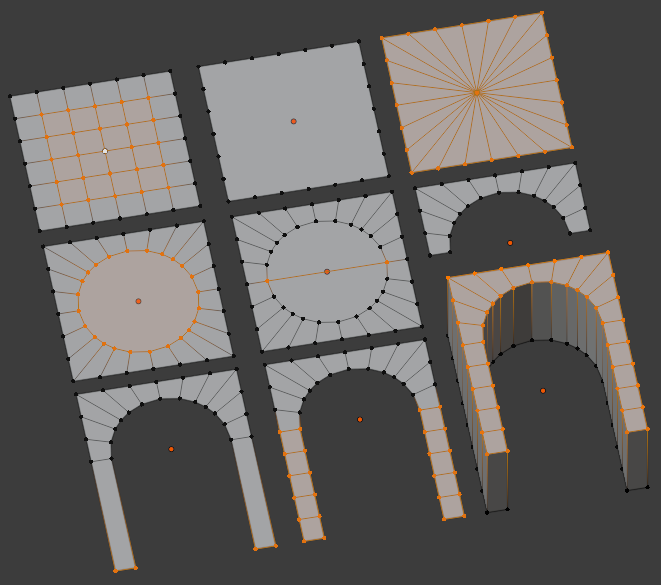 Then the model is suitable for a Bevel of its sharp edges, either CtrlB by hand, or by using a modifier, and a level or two of Subdivision. 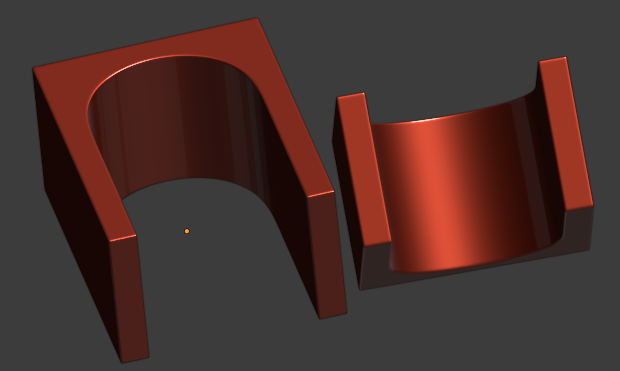 Let's say that you have this arch: 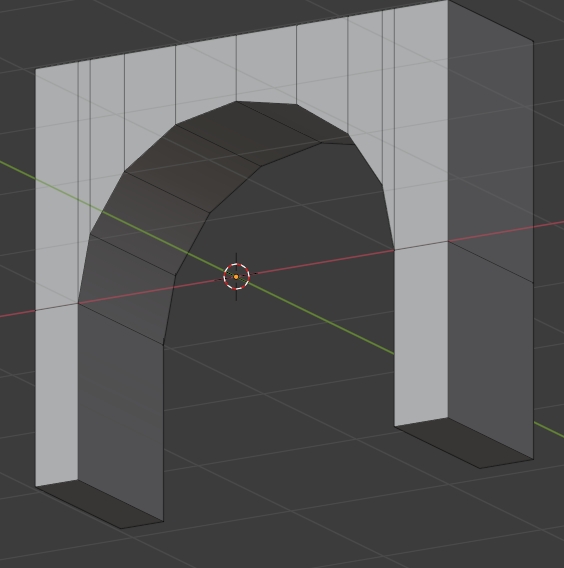 To shade smooth, right click and choose Shade Smooth. The result will be horrible as it will try to smooth between large perpendicular faces, so what you need to do next is go into the Properties panel > Object Data > Normals and enable Auto Smooth in order to define which faces will be smoothed. 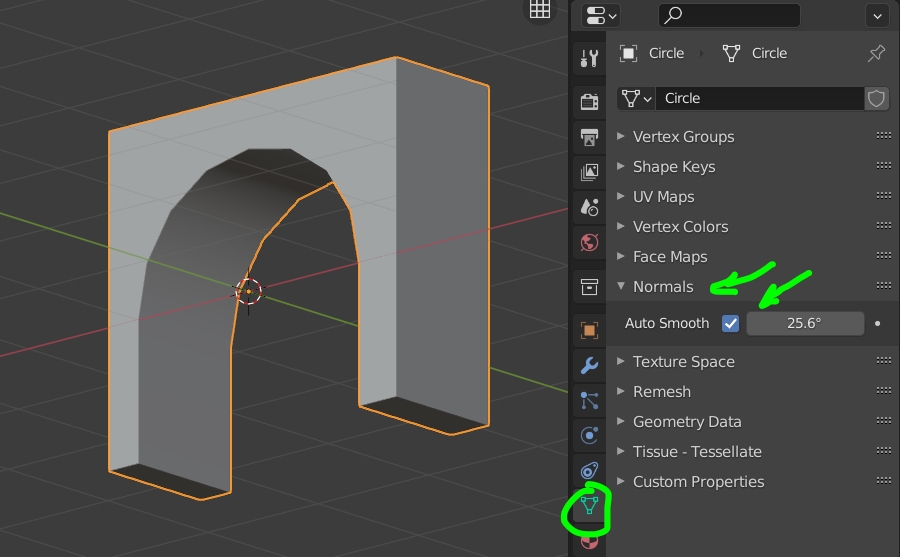 Note that the profile won't be rounded though, you need more geometry if you want a round profile, in that case you need to subidive with a smooth value of 1, but it won't work fine, it will round everything unless you've sharpened your angles with additional edges.

The problem with your current topology is that you must have tried to round with subdivisions, but you didn't do the right way, so now it has a lot of faces that are coplanar, so instead of rounding the surface, it will tend to flatten it, even with the Shade Smooth and Auto Smooth. A lot of faces can round a surface if the faces are not co-planar, which is not the case here: 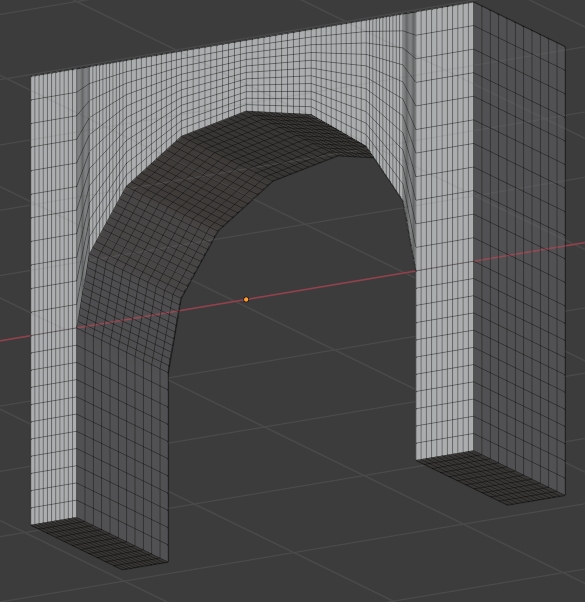 A way to fix your problem is to dissolve the co-planar faces with X > Limited Dissolve, you can tweak the angle in the Operator box if necessary, then give your object Shade Smooth and Auto Smooth and it should work.

Not the answer you're looking for? Browse other questions tagged modeling mesh modifiers edges geometry or ask your own question.