Can I use absolute snap to grid in edit mode where the grid is rotated to match the rotation of an object's origin? My workflow depends on it

TLDR: I want the snapping grid to be translated into local space while editing an object. This is very important to my workflow as I attempt to emulate art from Pineapple Smash Crew and Stratus. Is there any way to do this? Or any workaround to achieve this effect?

So I am trying to emulate the style of Rich Edwards' art from Pineapple Smash Crew and Stratus, and managing pixels on an angled object is giving me trouble. Say I rotate an object's origin, then I want to be able to use snap to grid, but with the grid translated into the objects space. So say my object is rotated 45 degrees, I want my grid to rotate 45 degrees and treat the object's origin as 0,0 on the grid. Or in other words, I want the snapping grid to be translated into local space while editing an object. This would make it easier for me to edit objects without messing up the pixels when I don't intend to break the grid rules for stylistic reasons. Let me give an example of how things are going wrong using a couple screenshots.

In this first shot I have an object that has not been rotated. It is easy to make loop cuts and edges that will sit flush with the edges of pixels with no texture distortion. 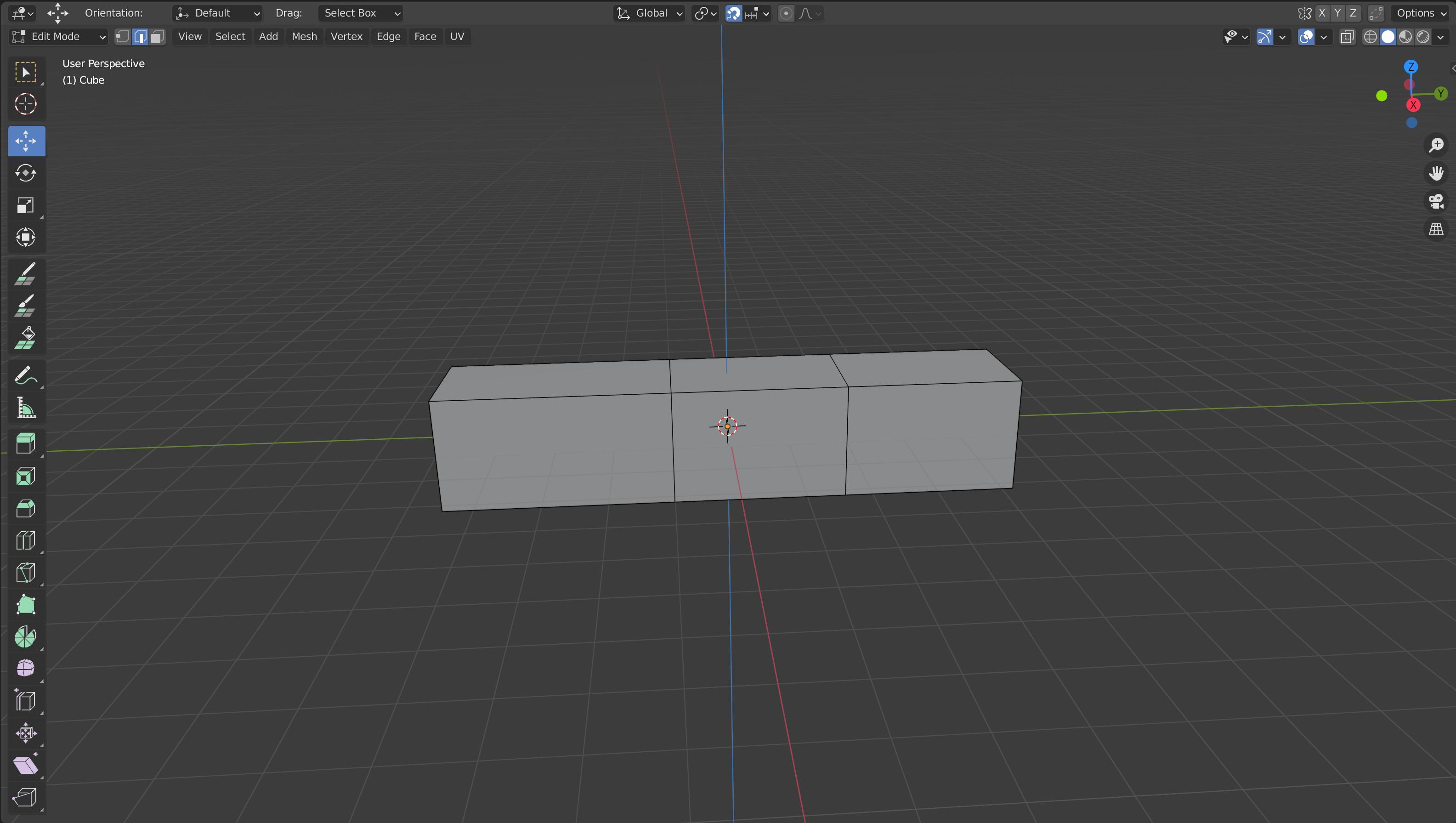 I rotated the object and added the selected loop cut. The snap settings have not changed from the first image, although I did change the circled space option from global to local, which does not seem to affect snapping. If the snapping grid were to rotate with the object in edit mode, I would be able to snap the new loop to overlap with the correctly positioned old one. But because it doesn't translate the the grid to local space, what you see here is the closest to overlapping the correct loop that I can get. 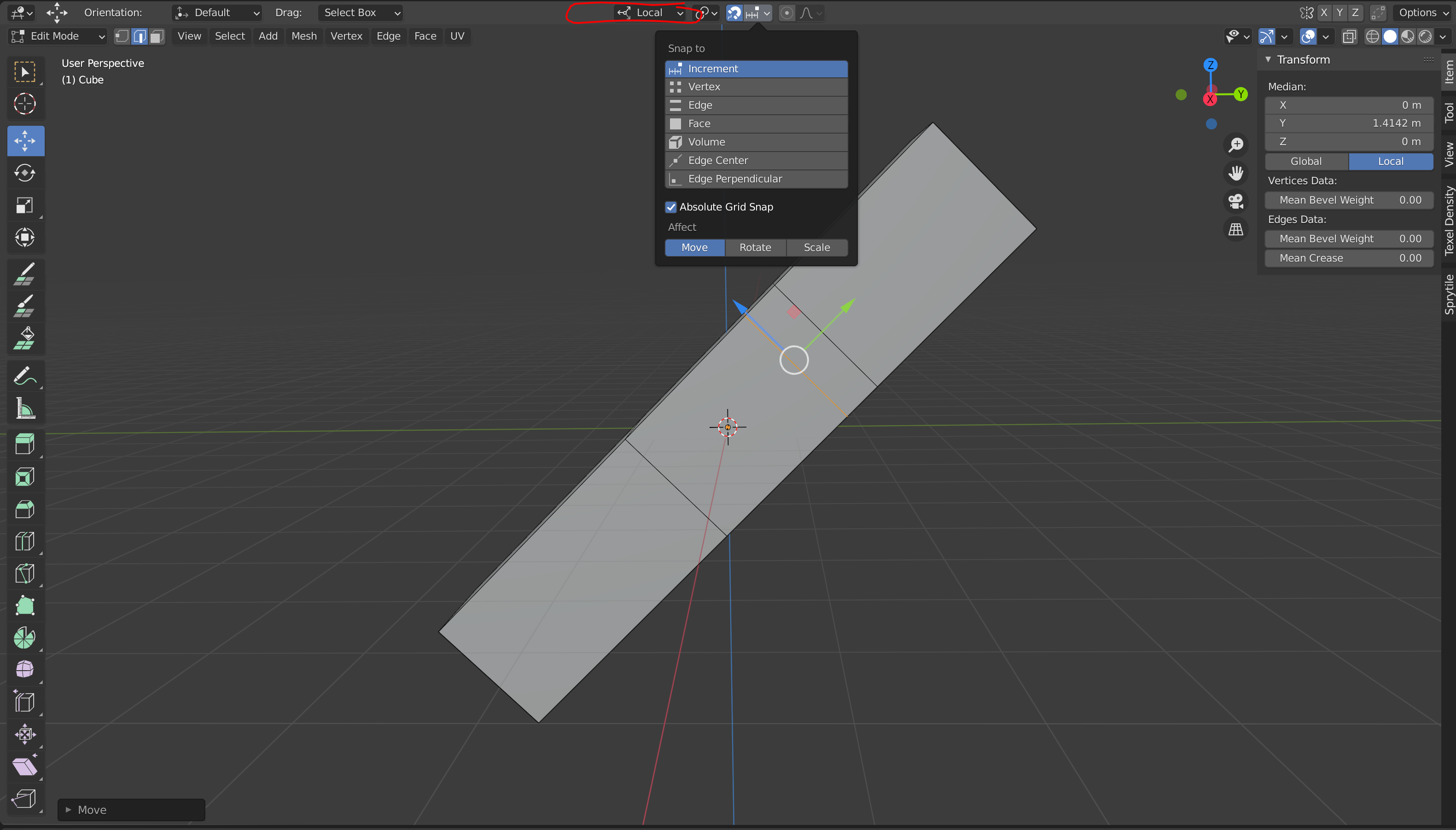 I have tried turning absolute grid snap off, but that causes other issues. Like if I make a new edge loop in this situation, it will not be aligned with the grid, and the only way to get it on the grid is to snap it to an edge that I know is already correct and then work from there, which is not only tedious but also very limiting. One workaround I tried is to only edit things when they are not rotated, but in certain situations, this is a pain. Such as modeling arms for a character. I want to model the arms as separate objects that I put in an A-Pose while I edit, so I can see how long they are against the body, so I have to un-rotate, edit, and re-rotate them if I ever wish to change them. I have to guess how long they need to be, then trial and error until I get the dimensions right, which is a real pain.

So is there a way to use absolute grid snap in local space? A workaround to achieve this same effect? A tool for this art style that would help me avoid this issue? Any potential path around this problem is appreciated.

In my example I've created a reference plane, subdivided like the world grid, set it child of my mesh, rotated the mesh as needed, created a loop cut (Ctrl R, enter), pressed GG to slide it along the edges, using the vertex snap option to have it snapping along the rotated grid. 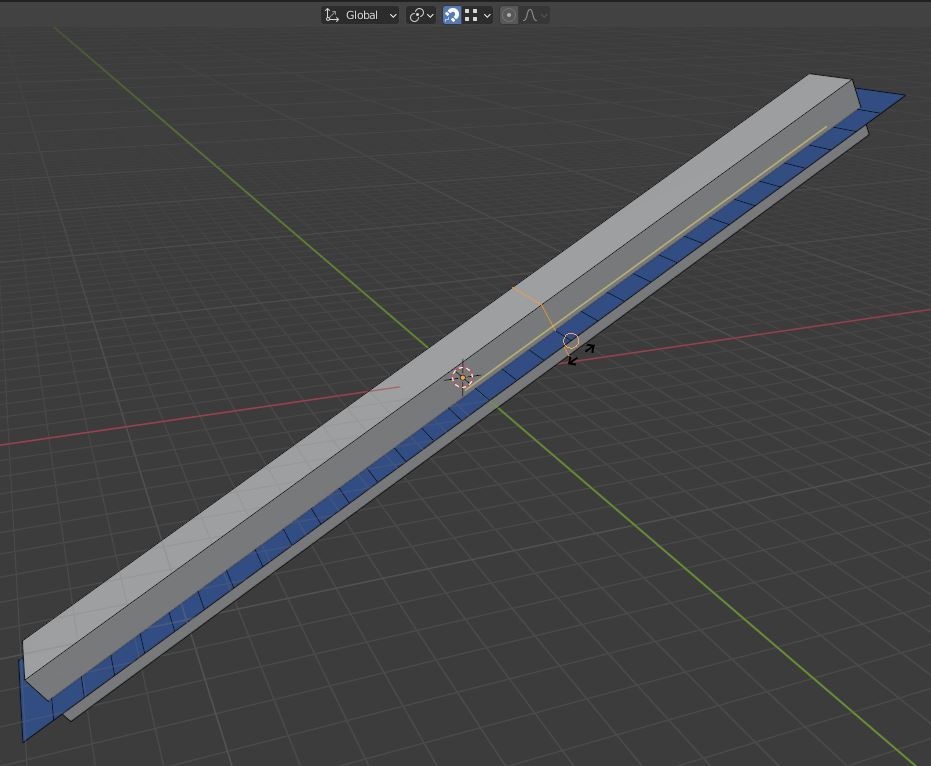 Not the answer you're looking for? Browse other questions tagged modeling pixel-art or ask your own question.

10
How do I snap a vertex along a local axis?
3
Changing the pivot point and using it to snap to grid
1
How do I match an object's rotation based on the other object's face's rotation?
0
Snapping to grid get's messed up after scaling down vertexes
0
How to reset the axis of mesh rotated in edit mode?
3
Isometric 30° seems to behave like dimetric 26.6° (Blender 2.8)