How to take what a camera sees and project it from another camera?

Is it possible to take what a camera sees, and use that from another camera as a projection? That is to dynamically update a projection from a camera?

There are some interesting results if this can be done, for instance transition wipes like from a traditional video editing suite, or feedbacking loops, or dynamically changing displacement maps.

Scene.TV contains a model of a TV and a camera looking at it.. The TV display is UV unwrapped to fill the complete UV map and has its own material with a Material Index of 1 (the number isn't important, it should only be exclusively used for the display).

Scene.Monkey contains a model of rotating Suzanne and a camera looking at it.

In Scene.TV I've setup the Compositor with two Render Layers nodes, one for Scene.TV and the other for Scene.Monkey so that when you hit F12 Blender renders both scenes.

To bring the monkey on the TV, I combine both scenes with an Alpha Over node. I plug the TV scene in the first input.

The monkey scene gets plugged into the Image input of a Map UV node, the UV pass of the TV scene goes into the UV input.

This maps the monkey render on all UVs of the TV render. I plug it into the second input of the Alpha Over node. To restrict it to the display, the IndexMA output of the TV scene is used as mix factor. Note: The ID Mask is needed to get the correct material index of the TV display. If all other materials have an index of 0 and the display is 1, the mask isn't necessary.

Here is my Compositor setup: 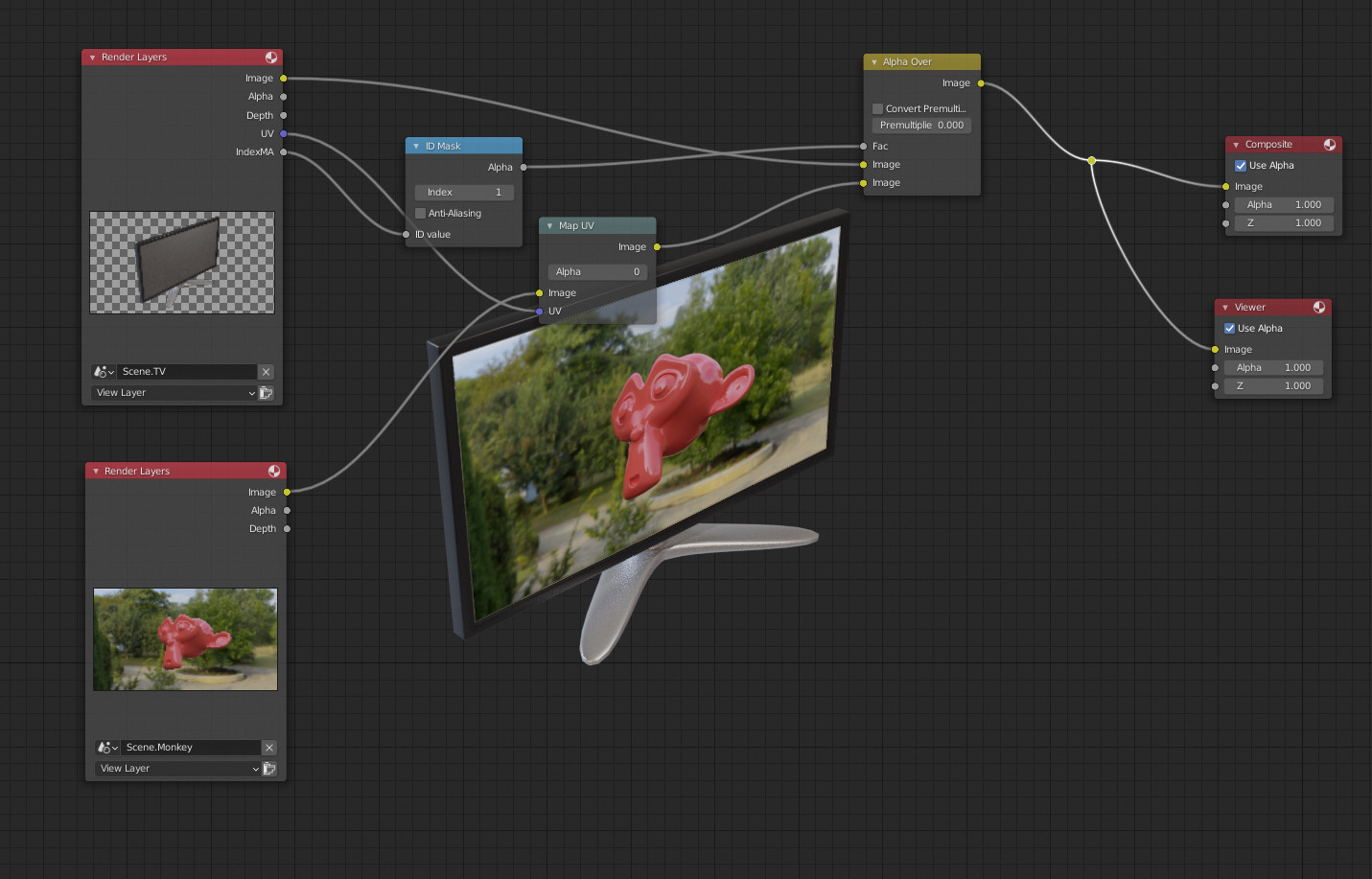 Theoretically you can have one scene with different view layers showing different collections when rendered, which people use to composite certain elements together instead of rendering them all in one layer. But as far as I know you cannot have different cameras in one scene, so I guess you have to stick with the two scene solution explained above.

EDIT: I just saw that although you asked for a current version setup because the other answer that jachym linked to was for layers... but actually there are used different scenes, just like I do. So it's basically the same solution. Maybe my node setup helps explaining a bit instead of having to download a file from an external link.

Any thoughts about this camera to projection requires rendering, but it can be done in one go in the same scene by one hit of Render Animation.

You can use one camera to render its view and reuse result as texture for Light object (projector) in a next frame seen by another Camera ... if you don't care for one frame delay :)

Previously I suggested to create another scene just for VSE to add Scene strip of original Scene, because there can be specified camera and a directory independent on original scene to be rendered, but ...

... as pointed in Rich's comment to Stereoscopy > Multi-View works more straight forward. You can just set more Cameras in the same scene to be rendered at the same time into one directory. Rendered sequences are distinguished by camera suffix. To make it work ... 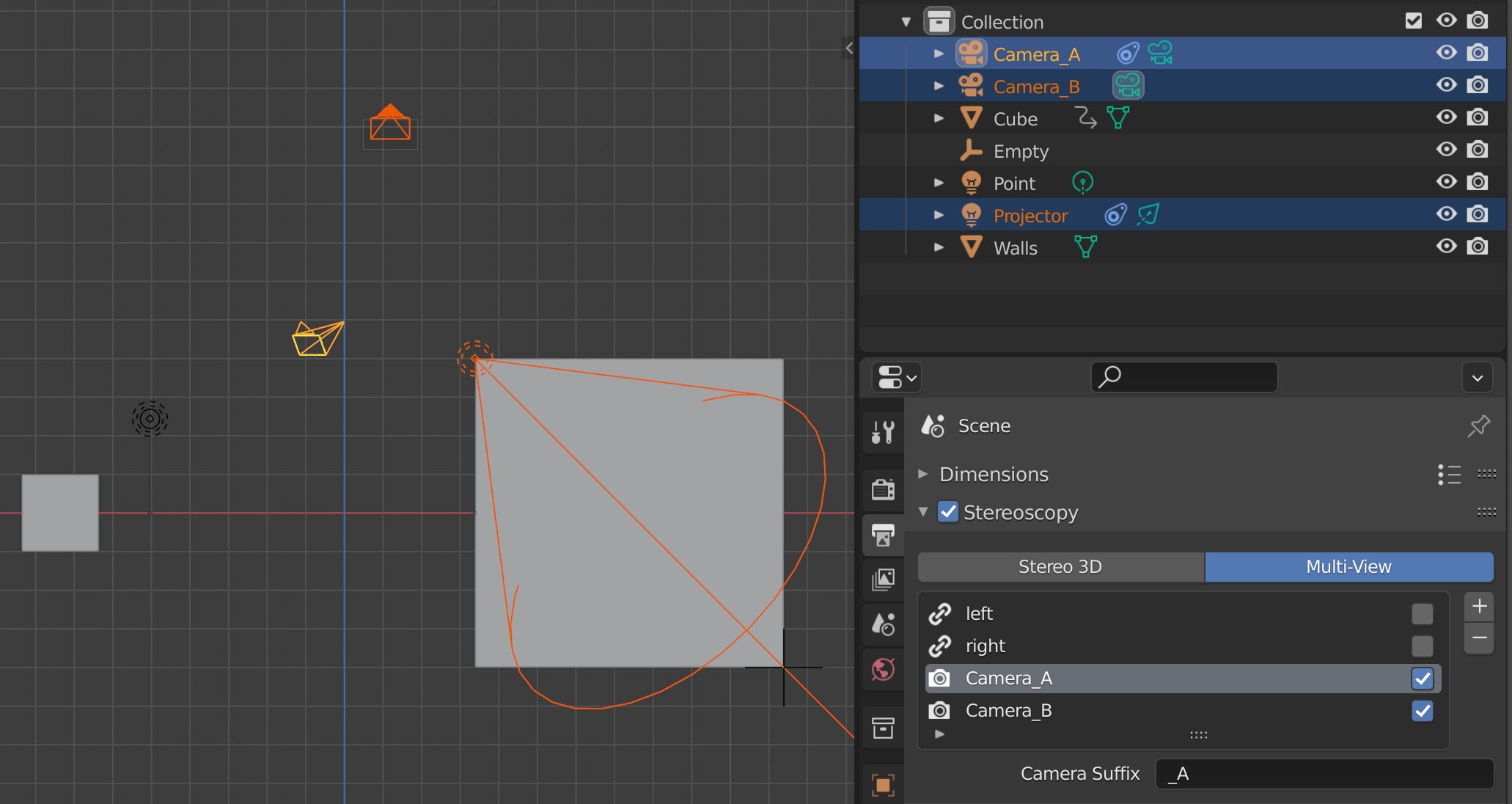 25
Zoom window magnification
12
How to generate Reaction Diffusion animation?
10
Project scene to plane in real-time
4
How can I view the camera through an object as a material in Cycles?
5
motion trail effect on video in VSE
5
Use the view from other cameras in the scene as VideoTexture in Cycles
2
Is there a way to batch render images from several cameras?

1
Compositor - Frameserver Input
3
Can this low-light animation in Cycles be rendered sharply and in HD, and how?
0
Color Correction of a Video
2
Realism mistakes/tips/tricks/ for modelling/texturing realistic low poly terrains
2
Render what camera sees and not first frame
0
How to obtain a simple and effective rendering without having to create a complex material?
2
How could I setup a « video feedback » effect ? (camera filming its own output)