How to get driver value via python? 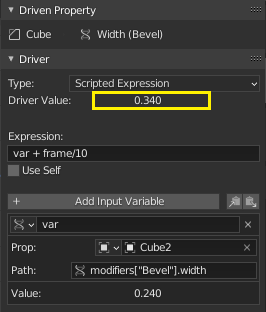 python scripting drivers
Share
Improve this question
asked May 30 at 11:12

Look at the value of the driven property.

In the example given in question, the bevel modifier width of one cube is being driven by that of another. Have set up similar, the driver value being displayed via UI is 0.2

Given the object of interest has context, retrieve this value by simply

Or from the driver, similarly to above a quick visual check confirms the driver is the zeroth

And hence the value,

If the value resolves to an iterable will require using the array_index of the driver [Look for link.]

Consider investigating custom properties as input data to drive from. For set up like above all drivers will break if the driver variable target object with the modifier is removed.