This picture shows the issue, a very strange distribution of the object to which I've given a very high count value: 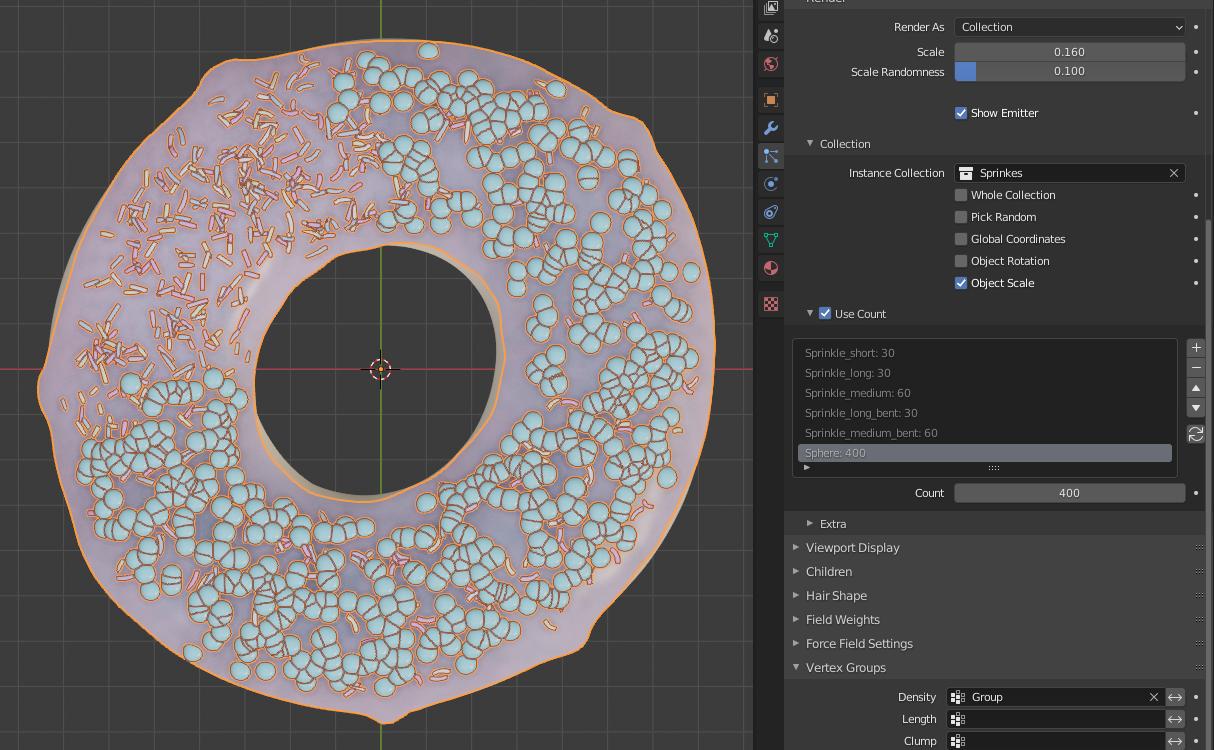 See how the spheres don't appear at all in a segment of the surface that they're supposed to be distributed across?

Having experimented with adjusting the counts of the various items, I'm guessing that the underlying algorithm goes down through the list of items, takes each item in turn and places the given count of that item on the surface. And passes through the list repeatedly until it's placed as many items as you specified for the total number of particles.

So if e.g. you've got 800 particles and a list of 5 objects then if you give the first two items a count of 500 each, you'll actually end up with 500 of the first item, 300 of the second item and none of the remaining items (no matter what their counts are).

Is this correct? But this behavior doesn't account for the odd distribution seen above of the spheres. It looks as if, instead of distributing the spheres evenly all over the sphere, it's already decided on a particle density and then sweeps from the 12 o'clock position laying down spheres and then stops the sweep once the desired number of particles is laid down.

This seems a somewhat odd behavior. But I guess the solution is to use smaller counts relative to the total particle count to avoid this kind of thing?

But I only came across this issue because smaller counts hadn't worked out for me. I had six items in my list, I gave the first five items counts of either 30 or 60 and then gave the final item a count of 1 as I wanted far fewer of them.

However, this resulted in even fewer of these items than I wanted. But increasing its count from 1 to 2 resulted in too many. So, I thought the solution would be to apply a factor of 10 to all the values and this would allow me to vary the count of the last item between 10 and 20 rather than just being either 1 or 2. But this didn't give the result I expected. I thought the counts would be totaled up and then each count divided by this total to give a probability of that item being picked as each of the particles is placed. But now I theorize the algorithm described above.

Is there any way to use counts to achieve something like the probability-based distribution that I want and/or be able to get more fine-grained control of the very rare items (the spheres in this case)?

You can check the checkbox „Pick random“ to solve the problem.

0
Assigning a probability to different particle objects using "Use Count" and "Pick Random"?

2
Particles are not being killed by collision object when interacting with sides of object
14
Generate Particles with Random colors (continuously or from a set)
4
How can I assign a different image texture per particle?
0
How to get same hair particles from collection in second particle system/ or how to delete instanced particles without converting them to real meshes?
0
Hair not emerging from all vertices in vertex group
6
If you accumulate 100 identical spheres into a sphere shape, how many will be on the surface or touching a sphere on the surface?
1
Struggling with particles intersecting each other