How many dB (Decibel) are at the extreme limit of the Waveform?

How many dB (Decibel) are at the extreme limit of the Waveform, where the Waveform turns red? 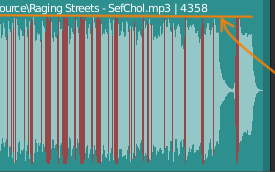 video-sequence-editor audio
Share
Improve this question
edited May 9 at 20:02

Decibel is a comparative unit, like percentage but logarithmic, so red lines say "You went over 100%". But 100% of what? It's 100% of the hardware and software capabilities.

In professional audio there are many different conventions, named dBU, dBA, dBV, and so on, often referred as generally dB, but it's not correct to say dB if you don't specify referred to what.

In this waveform representation you can think that the minimum audio level is silence 0% and the maximum is 100%; red lines underline the fact that signal went over 100%, and it will be cut to 100%, resulting in distortion (like overexposing an image, resulting in uniform white where different shades should appear).

This 100% level is often referred as "0 dB", which is the maximum peak level the system can handle without distortion.

In this kind of representation average (RMS) levels often stays between -14 and -10 dB (but it all depends by the kind of signal and its levels of audio compression).

Level meters are always logarithmic (as our hearing capabilities are very large: from wind whispers to Jumbo Jet takeoff: from + 30 dBA to + 140 dBA), so 50%, corresponding to - 6 dB, is often represented similar to this picture: 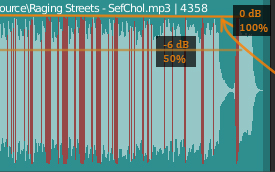 In this examples 0dB corresponds to the maximun output level your sound card can deliver (typical levels are - 10 dBu for consumers equipement, + 4 dBu for professional equipement).

7
How to Draw Waveform Automatically
5
No audio playback in VSE but rendered file has audio
1
VSE: audio 'now' not rendering properly - clipping/missing/distorted (edited)
2
How can I make the waveform in sequencer bigger?
0
How much is the upper limit of video capacity when we use Video Editing?
0
How to adjust height of sound strip in VSE?
0
How to understand how many dB are at different points on the track?