How to animate proportional editing effect?

how should i go like if i want to replicate this effect in an animation? i'm open to use animation nodes too but maybe this can be done on vanilla blender?

You could set up a grid, instance your cubes on its vertices, and then deform the grid using a Hook modifier... 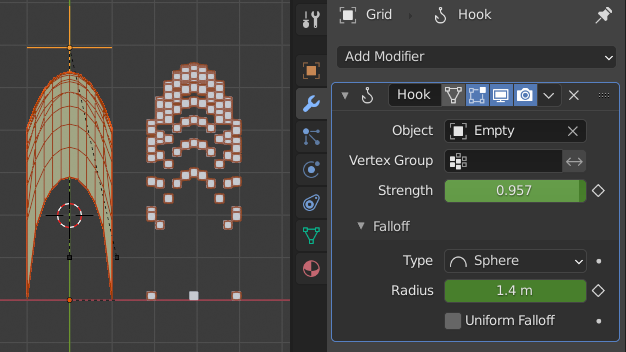 .. here, to an Empty. (Assignment of hooked vertices has to be done in Edit mode.)

This lets you keyframe the position of the hook, and the radius and strength of its influence. Much like Proportional Editing.

Here, one of the faces has been copied from the undistorted grid, and P separated to a new object. That has been parented to the grid, and instanced on each of its vertices by setting 'Vertices' in the grid's Object Properties tab > Instancing panel.

Not the answer you're looking for? Browse other questions tagged animation nodes editing animation-nodes object-mode or ask your own question.

1
How can I make a sound wave effect on a “wall” of cubes through animation nodes?
5
How to animate 'Bridge Edge Loop' effect
3
Animation Node-start of effect
2
How to create a flower unfurling effect?
2
Parsing xml file with animation nodes
1
Network Effect Animation Nodes
4
Spiral unrolling/rolling animation in Animation Nodes?
0
How to distort still image or gif animation
14
How do I achieve this “hexagonal armor” animation effect in Blender?