I am trying to automate the process of removing all UV layers except for one named 'baked' on an active object. looking online I can only see answers using data.uv_textures, something that changed in Blender's API. 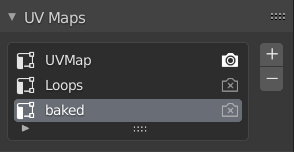 Also, Any tips of how to use the blender documentation will be greatly appreciated. thanks.

The following allows for passing either a single string of a uv_map name to keep or a list of names to keep.

Since the function rem_uvs takes a parameter reference of the object a check is made to ensure the object is a mesh type (which may have uv_maps). Attempts to iterate through objects that do not include data.uv_layers would cause AttributeError and the script would fail.

In order to avoid errors caused when modifying a loop control all items that are intended to be removed are 1st added to their own list. That list is then used to remove the uv_maps from the object.

Be sure to only use one of the 2 function calls at a time or include the single name in the list of names.

Not the answer you're looking for? Browse other questions tagged python scripting uv or ask your own question.

3
How to find and delete extra UV layers on many objects?

1
Python script for adding Child Of bone constraint with 'Set Inverse' to multiple bones?
27
Blender 2.8 API, python, set active object
3
Where can I find a proper API reference?
4
Strange size when creating a cube using bpy.ops.mesh.primitive_cube_add
2
How to use template_any_ID() into Ui Layout?