How can I change multiple properties on the same and different nodes at the same time?

I'm working in the compositor, and I have several blur nodes that look like the following: 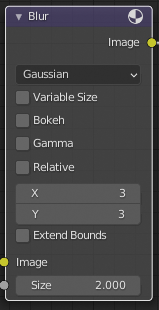 The first thing I thought of doing was creating a sort of "macro" controller, something like a slider that I could connect to each node to control the x and y properties. I couldn't find anything on that either beyond just using a mapping node, which seems a little overkill... so any help would be appreciated there as well.

After looking into that though, I realized that the X and Y properties don't even have a socket... so that's where I'm stuck. Is it possible to "reveal" the socket for the X and Y nodes? They seem to be integers which is one of the available socket types.

The X/Y dimensions of the Blur node are properties, not inputs, so they can’t be controlled via a socket. However, if you just want a convenient way to control them all together, you can use drivers, instead:

Not the answer you're looking for? Browse other questions tagged nodes compositor properties blur or ask your own question.

1
Compositor blur is patchy?
11
Use custom properties (variable values) in the node editor
0
Can you find lost Nodes in the Node Editor?
1
Can I use the distance between two objects to animate a property?
3
How to get the max and min value of a certain NodeSocket's slider?
2
How to create a panel with different properties for different objects
3
How to control the particular value of the different mapping nodes