How to move vertices into normal angles

I have a model that I am working on and I want to cleanup before I start adding details. I have a few angles that I want to make 90s that are really really close but aren't right. Is there something simple that I can just select 3 points and force them to create a 90? 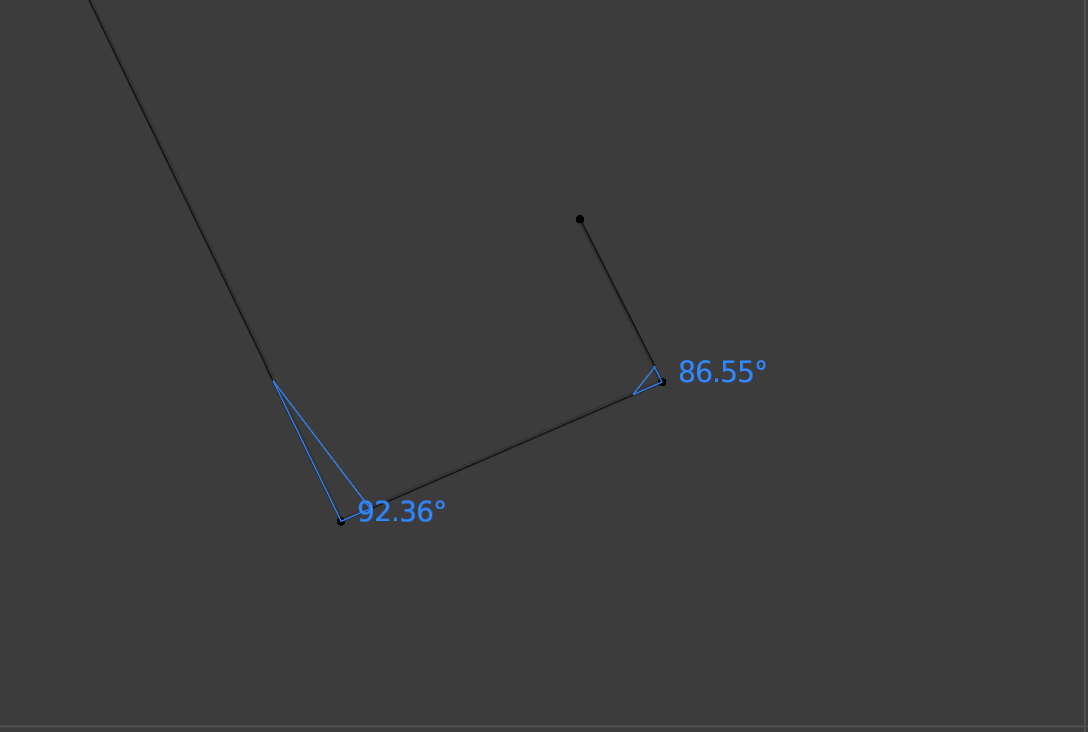 You can create a Custom Orientation from the edge you want to square to. That's the little '+' in the header's Orientations dropdown. If you have to do this a lot, I would recommend creating a shortcut for it, and/or adding it to your Quick Favourites menu.

(You can also set Custom Orientations to be used after creation, and to overwrite previous creations, to avoid clutter, in the F9 'Adjust Last Operation' panel.)

'Y' then becomes the direction along the edge. If you set the Pivot point to 'Active Element', it's quite quick to select the vertex to be moved, then the vertex to square to, and SY0. (Scale the vertices to 0, along Y, to the active vertex.)

However, the result is only one of the possible edges in the plane at right-angles to the target edge.

You can use the same strategy to flatten vertices onto a plane of your choice. Select any 3 vertices to define the plane's direction, and again, create a Custom Orientation from them. Select any set of vertices, with a vertex lying in the the plane you want to flatten to active, and this time, SZ0.

You don't have to delete everything and start over. Sometimes it's necessary to work at odd angles. If you want to preserve your work, consider creating a custom transform orientation that forces Blender to treat your odd angles as if they were aligned with the global axis, even though they are not.

However, before you can create a new transform orientation, you have to have at least one full polygon face available to select, and your work shows only vertices and edges. So you'd have to use those vertices and edges to create a face first, select it, and then create a new transform orientation from this new face. The three vertices shown in your pic are co-planar (of necessity, three vertices are always co-planar), they will suffice for creating this face.

Once the face is created, select it in Edit Mode, then press SHIFT + Numpad 7 to force your camera view to orient perpendicular to this new face you just created. If you don't like the visual oddness of this new camera orientation, sometimes it's less unbearable if you add CTRL to this same combination of key presses, which will flip to the view 180 degrees from the previous orientation. You don't need to take on this new camera orientation to create a new transform orientation. All you need is the selected face to create it. But by orienting your view to this new face also, it will make it much easier to edit the angle between your edges as if your work was aligned with global space. With your face selected, go to the top of the 3D View and press the Transform Orientations button to get access to the option to select different ones. Click the 'plus' sign to create a new transform orientation based on your current selection. 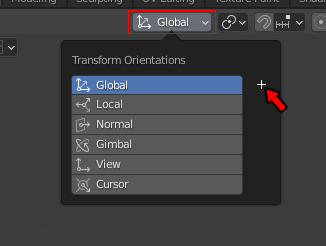 Now, as for your angles: Here is what I'm starting with. My angles are different than yours, but it doesn't matter, since we're straightening them. As you can see, I'm at a bizare global space orientation, but it doesn't matter, because I've already reoriented my camera to be perpendicular to my face, and I've already created my custom transform orientation. I also deleted my face after doing all this, but kept the edges. 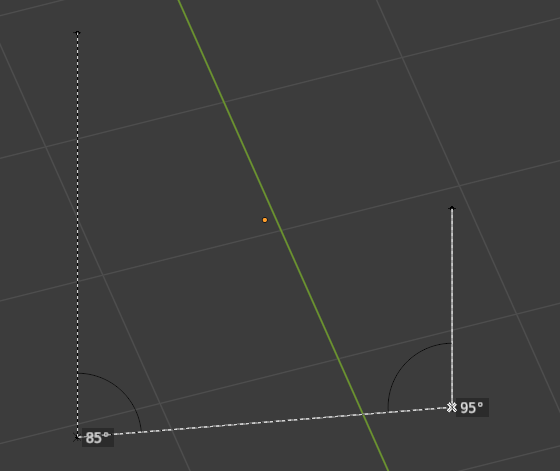 I would delete your horizontal edge, and preserve your vertical ones. I would select your bottom-most vertex from either of the remaining vertical edges and then press e to extrude, then x (most likely) to constrain to the horizontal axis, then, with edge snapping enabled, finish moving the new vertex by dragging it to the opposite edge (it doesn't have to be connected yet, but should become perfectly aligned). 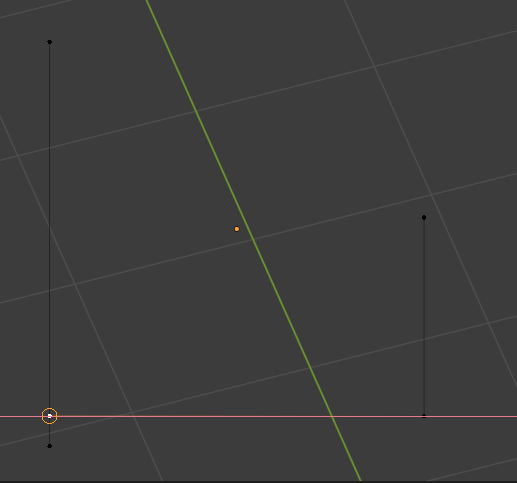 Select, then subdivide this opposite edge. Then, with edge snapping enabled, select the vertex that was created in this subdividing operation, and axis constrain your snap (most likely using y, especially if x worked before) so that it comes down to the level where the edges intersect. 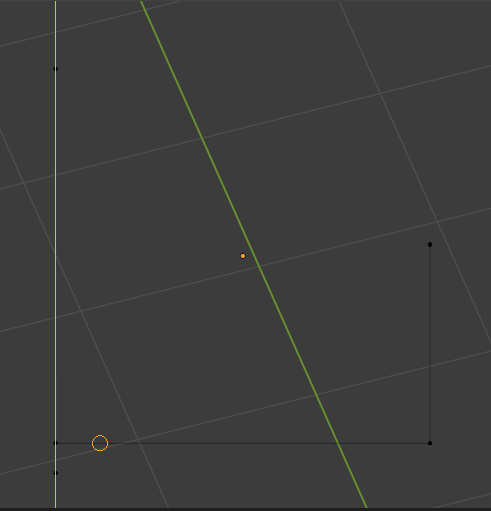 Now, make sure you're in vertex selection mode, CTRL + a to select all vertices, and press m to bring up the Merge menu. 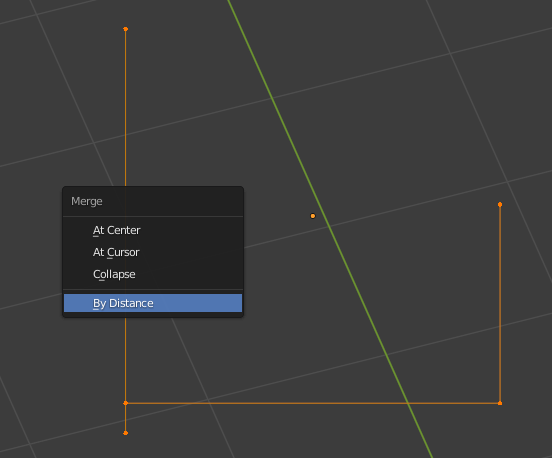 Select By Distance. If your vertices don't snap together, try increasing the threshold value until they do.

Once done, you can delete any loose edge parts which might extend beyond this merged vertex position. The result should be edge intersections which are exactly 90 degrees apart, and this should be so even for a face that was not ever oriented to global space. 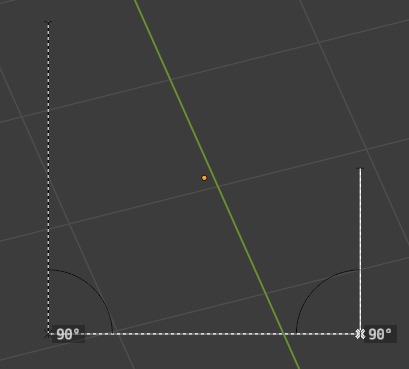 4
How to add detail to a mesh without subdividing all of it
3
Cut a model into two models by intersecting with a third model
1
How to make a smooth oval window
0
How to do retopology?
0
Remap wires or simplify triangles?
1
How can I make the viewport run faster?
0
Bevel vertices on a flat subdivided plane
1
How to move one edge's vertice without interrupting other mesh
0
How to move multiple not in plane vertices to a surface or an edge?