So I have a small shack made out of Legos in blender that I want to animate to fall over, the only issue is that the z rotation doesn't work as expected. Here is a explanation in pictures. 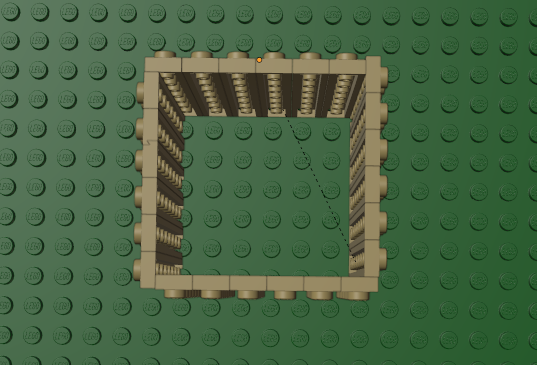 This First Picture just shows my little shack, all the legos making it there need to fall.

In this picture I thought that rotating around the z would help solve the issue, nope it moves the same way moving around the x does! I can make the brick sit where it is supposed to but when you play the animation do to all of the different axis movement it does a pirouette in mid-air, I just want it to fall flat. Thanks for your Help!

EDIT: Here is a simplified blend, the walls fall in and then need to tip and fall over.

EDIT#2: That totally works for rotating the object in the correct manner, thanks Markus von Broady! But the issue is when I put a keyframe into the animation, this happens. 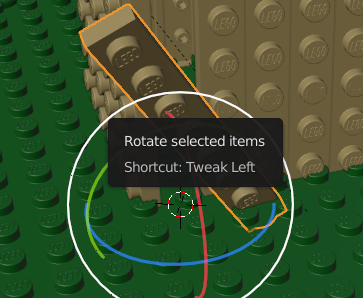 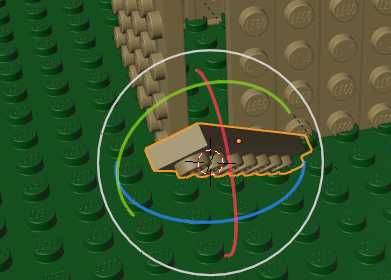 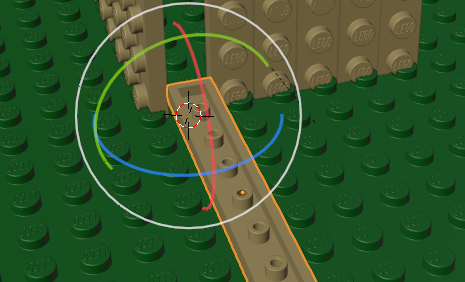 So its all good except for it swings out to the side in the animation! Do you know how to fix that?

On your second screenshot we can see the gizmo showing 3 axes:

The green Y axis is cut off and goes up/down (the letter is up, so the Y coordinate increases up and decreases down), X axis goes right/left (increases towards the right), and Z is in middle - because it goes towards you / away from you.

Rotating something around an axis is like pretending there's a real, physical axis going through that object, think of a wheel in a car and how it rotates around its axis. In other words, if you choose to rotate around a particular axis, every point of the object will remain within the same distance to the axis during the rotation.

👈 rotation around Z axis; all vertices stay at same distance (and in this case they share that distance which is the same as the radius of the black circle)

It seems you either want to rotate around the red X axis or green Y axis:

But since you want to make it flip over, with the lower end not moving, you need to move the axis of the object around which you rotate. All axes go through the origin point, so you move the X or Y axis by moving the origin point. Keep in mind the green and red lines in the viewport won't move, as they represent the X=0 and Y=0 in the world coordinate space, and not object coordinate space:

The effect is the same as if you moved the mesh (in Edit Mode) up to be above the XY axes (both local and world as in this case the origin is at 0;0;0 coordinates):

Keep in mind you don't actually have to modify the origin/mesh of the object. You can position your 3D cursor wherever you want and rotate using this cursor as Pivot Point, instead of Origin:

For a still image it doesn't really matter which technique you use, but for an animation you might run into different problems for each, so I recommend to try each of them and see which of those problems you like the most. Often you will use empties and parent your objects to them, for an additional control.

I have seen your question and the solution is quite simple. Press Shift+Right CLick and set the 3d cursor to at the bottom of the lego. Then, go to the object setting and set the Origin to the 3D cursor, and then it will be set there. Now, try rotating it, it should work. You could alternatively use physics, but I don't think the RAM that will be eaten is worth it.

Not the answer you're looking for? Browse other questions tagged animation cycles-render-engine transforms transform-orientation or ask your own question.

2
Why is my object rotating oddly?

8
How to stretch a mesh object over another?
0
Free fall physics simulation capture as a video
2
Unparent object but keep animated properties
2
Track to bone constraints lag behind animation/don't update correctly
0
Object won't drop after keyframing animate physics
0
Objects are not retaining original location in animation?
0
Weird light fall of on spheres
2
applying "clamp to" and "limit location" constrains to the same object don't work correctly
1
How would I go about making an object suddenly 'kick' up into the air, repeatedly?