Automatically generate 100 animations, each with a different texture input (BLENDER)

I come from the Adobe world, where things like Automate -> batch or Import -> Variable data sets were there to help me with my repetitive flow. Im a bit of a new user when it comes to Blender, but I do love it so far. I'm stuck in a Blender where I just can't wrap my head around and would appreciate your brain power.

I am trying to create multiple animated showcases for our shirts. We have a shirt body object and would like to change the shirt texture for about 100 shirts and export short animations as movies. The animations are about 200 frames in duration, so we are looking at a total of about 20.000 frames rendered, ideally that would result in 100 separate animation movie files.

Visual flow of the process that I have in mind 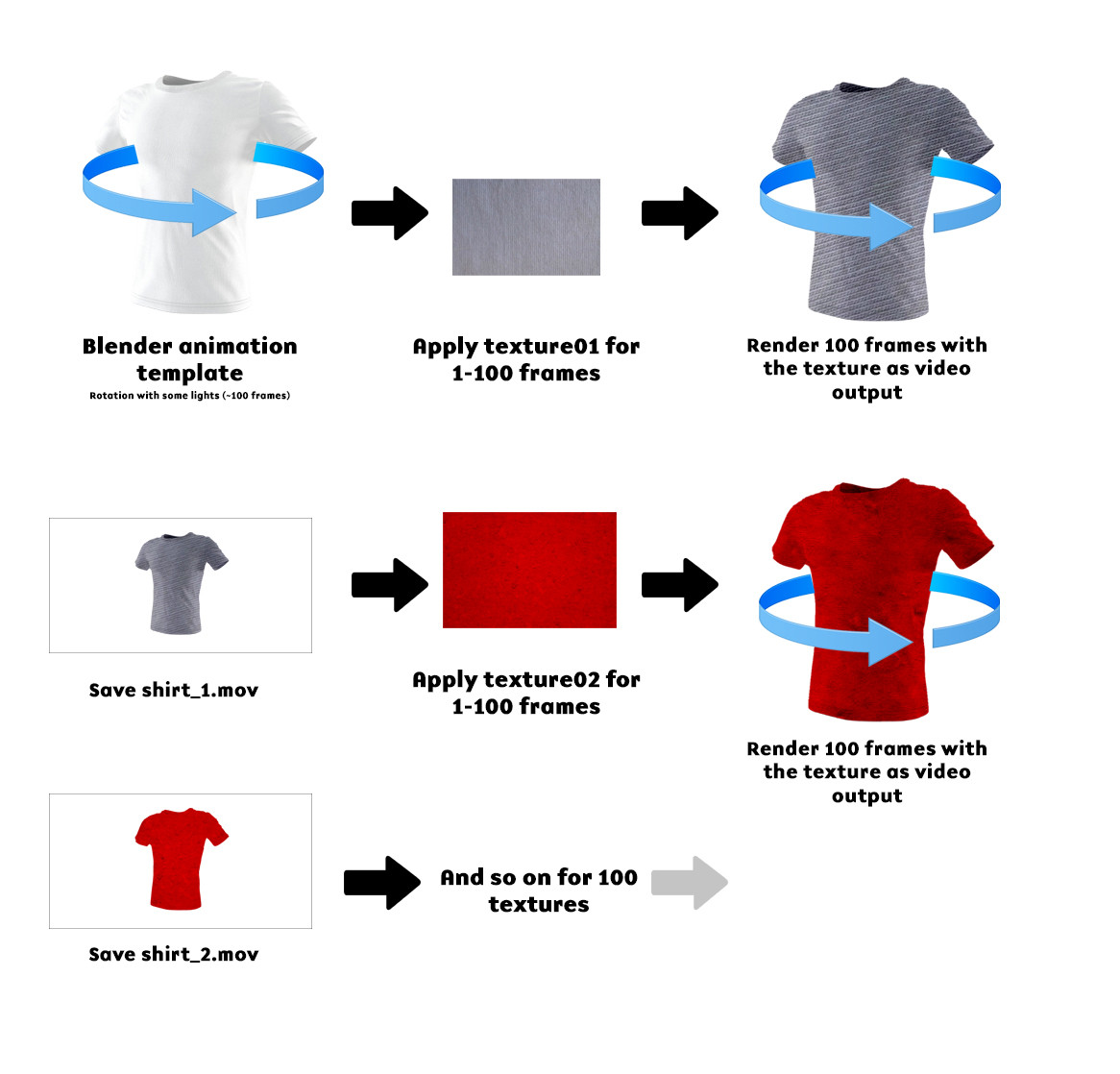 I am looking for help on a solution where I could retain my default scene, with all the camera moves, lights and just run either a script, or generate repetitive keyframes with a script, so that each animation can feed of from there. I know that I can replicate this 100 times and define different textures, but its just not developer friendly going forward when we will change the scene and the ambience of it.

So far I've *tried feeding the texture as an image sequence How to automate rendering of the same object with different textures? (but that changed my texture on every frame and still didn't get me closer to a solution. I do see how this would be helpful to have a variable data set approach for still images like in photoshop, but I just can't solve it for an animation? (Maybe a solution here is to somehow change the texture to switch on every 100th frame instead on every frame and somehow and loop the keyframed animation 100 times?)

I've researched a bit on replacing textures with python, however that would entail running the solution on a local computer since the script has to be feed into the command line and blender renderer called multiple times.

Since 20.000 frames is also quite a bit for my setup, ideally the solution would be baked into the blender file so it can be sent off to a render provider for faster results.

Thank you very much for you attention and your help.

Of course it is not perfect - maybe you should also check whether it is a png file ....but it works.

this is the result of my test run with 3 pngs:

The way I approached this problem in the past, without using Python in Blender, was to create a template .blend file, which uses some texture files it loads, then make a .BAT file which tells blender to render an animation:

Then you can replace the image files using Batch (the language .BAT format uses) with the next setup and render again.

Of course you can also use Python inside Blender:

Create a folder with your .blend file and textures. My example: (notice the first texture starts at 1 not 0, as it's 1-based indexing, since that's the convention you use in your question)

Enable auto submit in the renderBeamer. 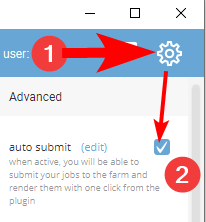 Add a script to your .blend file, name the script autorun.py:

Change lines 4-7 to reflect your case and run the script. You may need to confirm some messages from the garageFarm plugin.

The files should be automatically uploaded and downloaded (you may need to go to renderBeamer's downloads and press "refresh" to download everything). Then you will get each sequence in a separate folder:

You can't choose a movie file as output in Blender settings, as your render farm doesn't support it. You can, however, after choosing e.g. PNGs, convert the image sequences to movies in the web panel by right-clicking a render and choosing create video sequence. I don't know how to do that in bulk for all results, and I find it irrelevant to Blender really. What would be relevant is how to use Blender to convert those sequences to separate movies.

So my idea is a bit crazy, a lot crazy to be honest, but I think this will work. SO it is quite simple. I was planning on doing this. First, take each texture you want and plop them into any video editing software you like that isn't blender. So, now make each image (texture) last as long as you want it to last on the shirt, for ex. 100 frames (4.1666667 seconds if it is a 24 FPS animation). Repeat it for all 100 textures. Then, create a movie file out of it. Now, Go to shading and remove the Principled bsdf and add an Image texture. Set it to a movie and plop in the video file. You might want to change the UV's so they fit. Now, run it and it should probably work. I am not ultra sure if this will work or not, but it most probably will.

Now, you want to render it as that after every 100 frames, the file will be saved as a .mov file, right? Now, please keep an open mind and the absolute answer is no. This is because you want to render it using a render farm, and render farms only render in frames. So my suggestion is this, take each 100 frames and plop them into the video-editing software you love that isn't blender, then render it out as a .mov file and do it for every 100 frames. You can do whatever animations you want and there won't be any problems.

I am not saying any of the code they have provided is wrong or anything, they are great, but the problem is you are sending it to a render farm and because of this you have to change more code and stuff which may lead to more problems, then more code, then more problems, then more... you know the cycle. But using this method does nothing else and will work fine with the render farm and won't cause you problems while animation.

Im a bit late to the party, but cant you plop in 100 image textures, 100 rgb mix nodes in one material and switch them with one #frame driver. Send the one #frame value and with a bit of math chain activate them. Just cycle the rest of the amimation.

Not the answer you're looking for? Browse other questions tagged texturing scripting or ask your own question.

1
How can I script images processing of multiple images?
11
Can I change the speed of an image sequence?
2
How to automate rendering of the same object with different textures?
2
Change material texture by loading an external .png file with Python
0
Updating the texture image node using python
1
Rendering with a different texture filename using texture node without manually changing filename each time

1
Alpha Mask a texture with a mask having a different UV Map
0
Texture Atlas and Duplicates
0
texture coordinate node in blender - how to control textures with it
2
Keyframe Bar Chart Animation Efficiently
0
Insert keyframe for rigid body properties for object python script blender
1
I have a folder of X number of textures, I wish to render the same image X number of times, once for each texture
0
Splitting giant action into many sub actions via python?