I'd like to make an animation of a vending machine. I'm looking for some pointers on how to make the coil turn and drop a snack.

I've made the coil from this link. The coil is on a hard surface and there are two walls on either side of the coil. I don't know how to approach the problem of getting the coil to turn and getting a box to move forward and then fall. Any tips would be appreciated.

There are two ways you could do this:

Use a motor constraint:

By using this method the coil will react to the resistance of the package dragging against the tray, etc.

Once you have the coil, you need to set it in motion by adding keyframes. Go to the first frame press I and select rotation. Move to a different frame, rotate the coil and set a new keyframe by pressing I again.

Now set the coil to a passive rigid body.

Add the object on the vending machine and the rest of the collision objects. Set all of them, except for the box to be dispensed, as Passive rigid bodies. 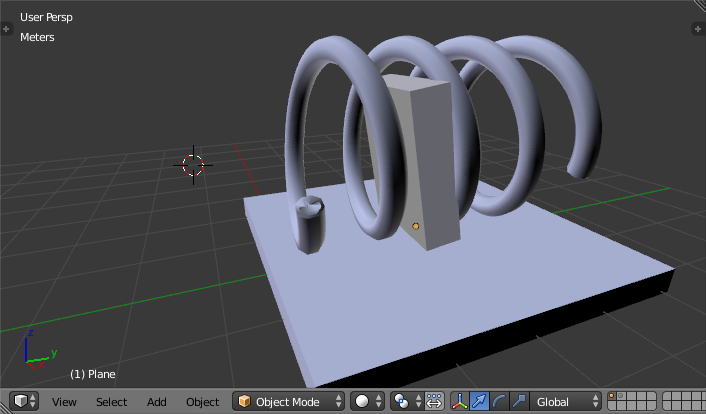 Then set your dispensed object as a Rigid body but make it active. The big problem, as you'll soon see, is that the coil does not work correctly as as rigid body to interact with the dispensed box. The box goes out flying out at at the beginning of the animation.

The issue is that the physics for collision objects and rigid bodies is far from perfect and does not follow the real geometry of the object, but creates like a bounding box: The Coil becomes almost like a big solid object with no gaps in between.

The solution is then to turn the dispensed object into a rigid animated object for part of the interaction to force it to follow the turns of the coil, thus simulating the real motion of a vending machine.

Animate the object so it follows the movement of the coil.

Not the answer you're looking for? Browse other questions tagged animation physics or ask your own question.

31
Model a simple 3D spiral shape?
7
Why are keyframes in global coords, instead of local coords? (Blender 2.70a)
4
Building a Conveyor
3
Rotating wheel with rigid body dynamics

2
Fluid not filling container completely
5
How can I make particles remain stationary on a surface?
3
How can I achieve a crumpling effect?
0
Workflow for making an animated short
2
Blender Game Engine Rigid Body Instability
0
Move another mesh along a surface when animating