I can't understand why it doesn't work. Driver value should be 0 according to my expression. Can't figure out what is wrong with it. 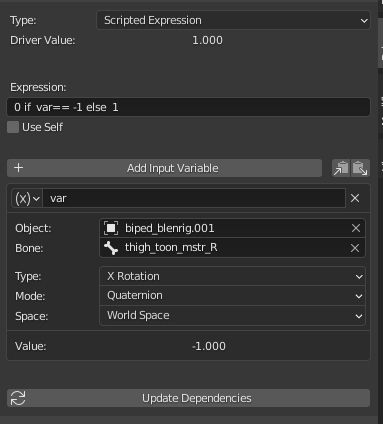 I wouldn't trust the value in a quaternion to exactly equal a whole number.

There are decimal numbers that a base two floating point number can't represent, for the same reason that you can't represent 1/3 exactly in base ten. While -1 isn't one of those numbers, it's conceivable and probably to be expected that some minute inaccuracy would have been introduced in producing the number that's used for that driver channel.

1
Adding driver through python doesn't work properly?
1
Driver Expression
2
Drivers: How to access "self"?
3
Add Min and Max Values to Driver Expression?
7
Use self and the slow python expression