I have a face mesh with several lip bones (upper/lower left/right + corners) all parented to a head bone. There used to be eyelids and nose bones which I deleted because I thought it would help Automatic Weight paint accuracy (clearly it didn't). The upper right /lip/ bone's weights are highlighted in the below image and the bone itself is very small and around where the red weights are. Why did AW paint vertices so far away, e.g. clear into the lower AND upper eyelids??? Is there some way to limit how far away from the bone AW paints?

The only related question I could find mentions needing to fix origins and apply rotations/scales/etc. That didn't help my issue, and I'm not sure where origins should ideally be placed. I don't know how to use the Vertex Proximity modifier. 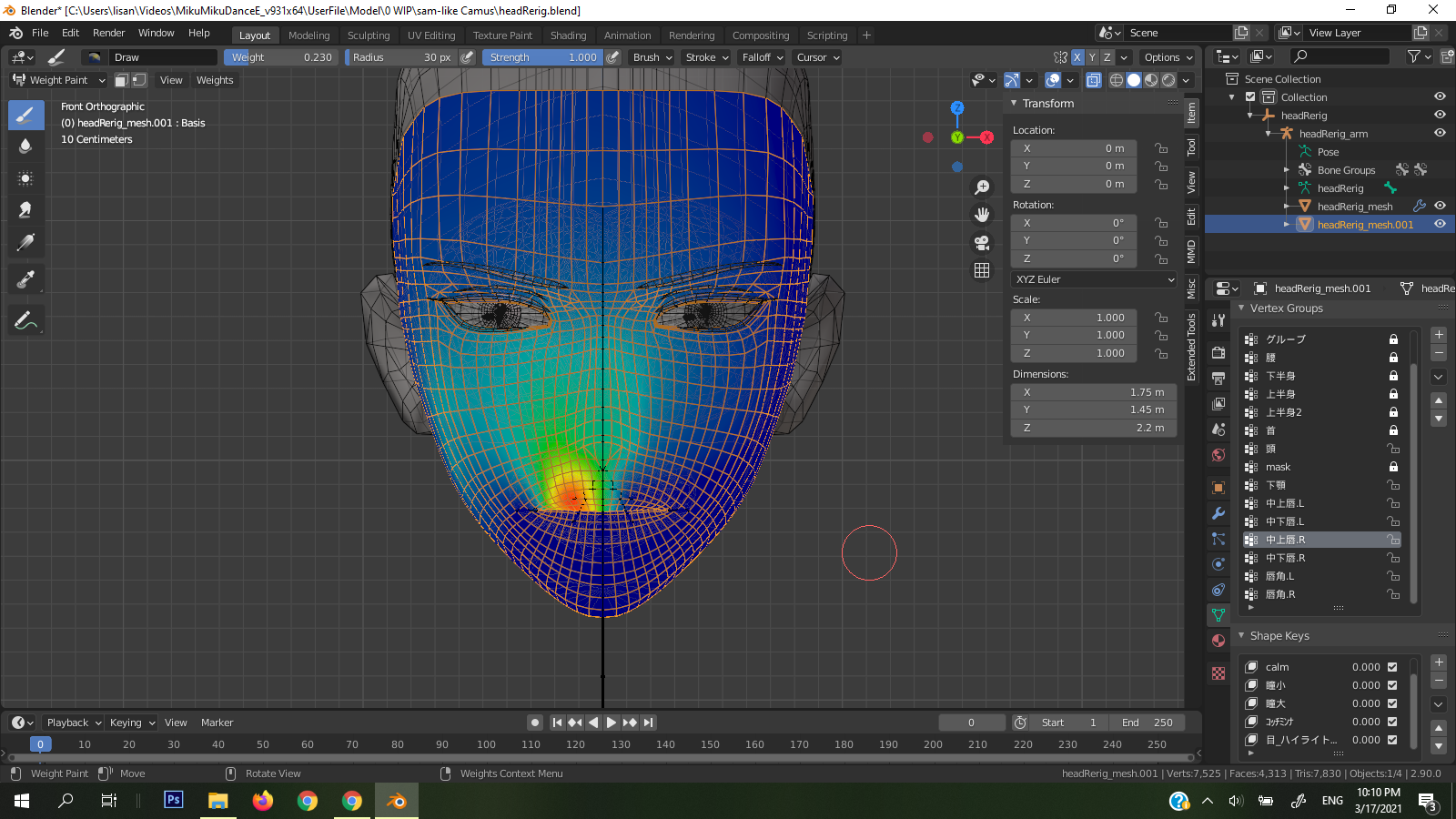 It's best to combine auto weights with manual weight painting when autoweights don't give you what you want. That's a fact of life; you're probably not going to get great facial bone weights from autoweights alone. However, there are things you can do to improve the weights autoweights give you.

The first thing to realize is that the entire line of the bone, head to tail, creates the structure used to generate autoweights. If the bone is longer, its weights will extend further. Your facial bones look placed only on the basis of the head, so consider making the bone tail closer to the bone heads.

The second thing to realize is that bones that are close to the mesh surface will get tight, sharp weights that don't spread far. Again, this is the entire line of the bone, not just the head. If you place a nose bone, from tip of nose to forehead, right on the mesh, it will affect a small part of the mesh. If you take that bone and move it deeper into the head, it will affect a larger part of the mesh.

Fourth is to realize that holes matter. Autoweights are contained by the mesh, and can bleed out around edges and holes-- like the side of your face or your eyes. Autoweights work best on manifold meshes. And the directions of your normals matter for the autoweights you'll get.

Finally, a lot of people use "helper bones" to help them create weights. These are bones that are never intended for manipulation, and are placed only to extend the weights of other bones. Here's an example, where I've created a loop of bones around your lips, bones which are ultimately parented to your head bone: 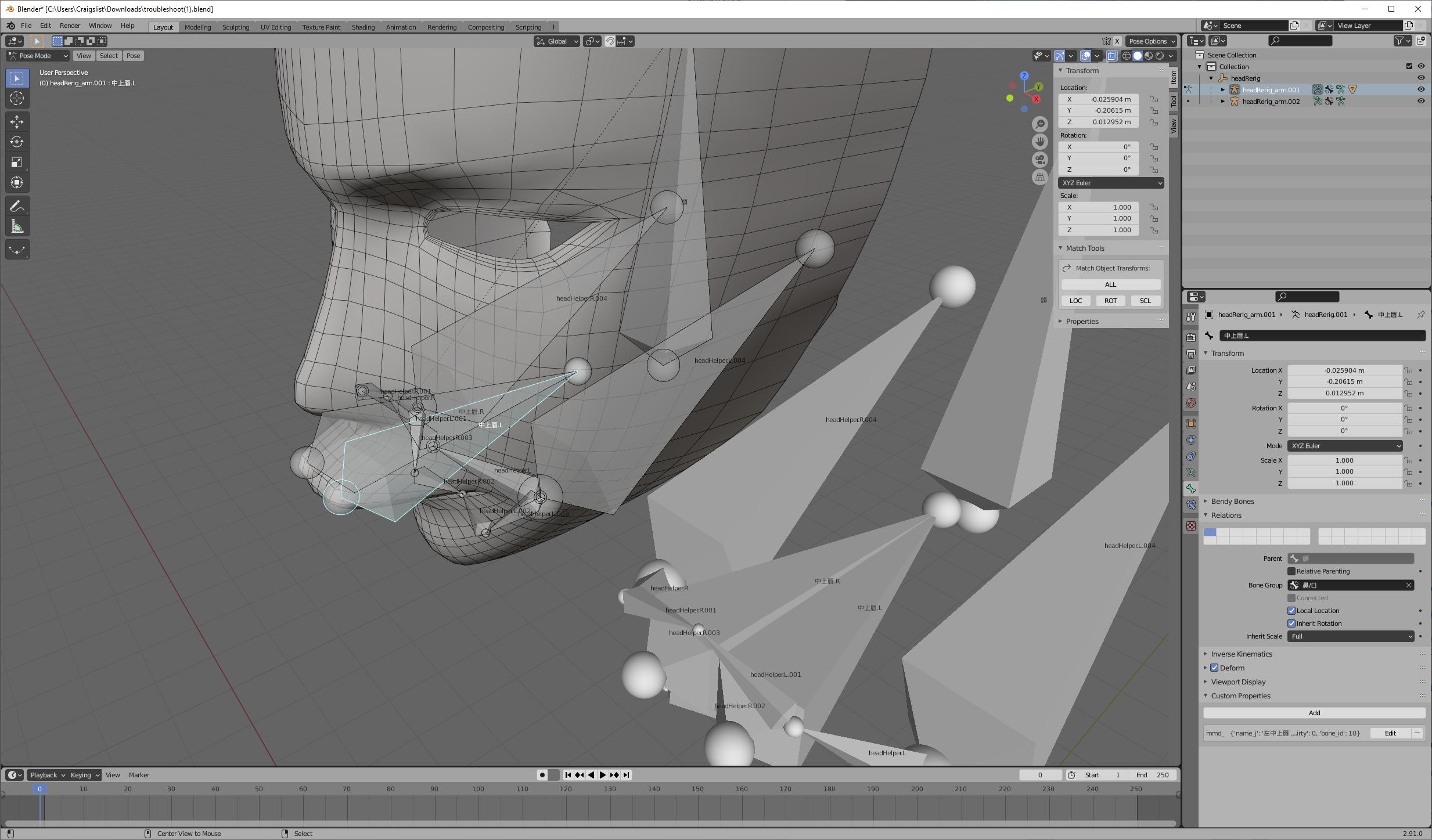 See how that ring of bones helps to contain the lip weights? The bones act as blockers, that prevent the lip bone weights from spreading past them. Because these will never be manipulated, and are children of the head bone, it will act exactly the same as if those bones were part of the head bone. (Although for some exports, it would be wise to eventually collapse all of these weights onto the official head bone-- something that is possible in Blender, but certainly not as easy to do as it could be.)

I finally have a theory. I believe you may be gettting a bone heat weighting error. That happens when you try to bind a mesh to an armature when the mesh is made out of too many different or intersecting parts, and Blender can't figure out how to weight the vertices. I was able to fix this by breaking up all the parts first in Edit Mode with p for the Separate menu, and then Separate by Loose Parts. Then I selected the face mesh and Shift + selected the head mesh, and joined them with Ctrl + j. Then I went into Edit Mode for this new head object and cleaned up this mesh so that the two newly joined mesh parts would be sure to have their verticies merged (Mesh > Cleanup > Merge By Distance). After that, I was able to do the normal binding operation by selecting this new version of the head mesh in Object Mode, Shift + selecting the armature, then Ctrl + p to parent it, and choose Automatic Weights. There were no issues with distant vertices getting bound to the armature.

I recommend that the entire mesh to be bound to the armature is a single, continuous mesh with no other, distinctly separate objects having been prior joined to it. Just as importantly, you should make sure that no other mesh parts are physically colliding or intersecting the mesh anywhere. When they intersect, or are joined together, and then you try to start a binding operation, this issue arises. Your model has eye objects intersecting with one another, and also intersecting with your face. Your face and head have intersecting geometry around the lobe of the ears also. This isn't clean modeling and you don't want it.

When you clean up your model so that all parts are separate (not joined together) and not intersecting one another (not colliding), you will be able to bind those mesh parts to the armature without any problems.

Not the answer you're looking for? Browse other questions tagged weight-painting vertex-weights or ask your own question.

3
Subtract the weights of one vertex group from another
1
Automatic weights affect opposite side of the pants
0
Why do automatic bone weights paint distant meshes
0
weights not showing in weight paint mode
0
Blender 2.81 Weight painting bug?
0
Weight Painting Mirroring Issue
0
Armature parent with automatic weights swaps the legs
0
Both side of the Weight Painting went to the right side
0
Why does auto weight paint do a poor job?