How can we animate a ball rolling over a path?

So I have an complex smooth surface. I created a high resolution path curve and used a Shrink Wrap modifier to make it fit on my surface where I want it. I apply the shrink wrap.

I can easily make an object move along this path now with a Follow Path constraint. Great.

But...I would like to animate a ball rolling along this path. I can't find a constraint or other tool in Blender that allows for this. If I knew how Python interacts with Blender better (I'm just learning) I would write something using quaternions (I've done this in an iOS physics engine I did a few years back).

Or is there some trick with rigid body simulation to make my ball roll along the constrained path?

What's an animator to do?

You can make the ball roll with a Driver, first - this is what you should already have setuped, make sure the ball's Follow Path constraint option Follow Curve is set:

Setup the driver like this (scripted type, no variables), also make sure Auto Run Python Scripts in User_Preferences > File is enabled: 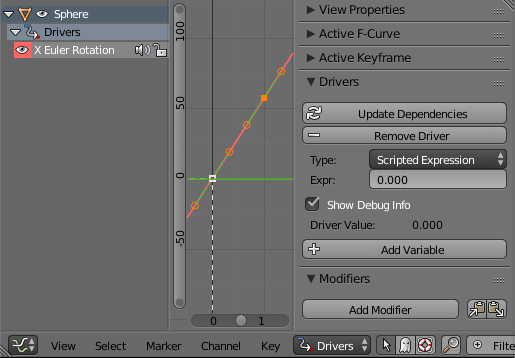 Lets add a driver variable for the curve evaluation time, call the variable "eval_time", in the Prop field put the curve and Path is eval_time: 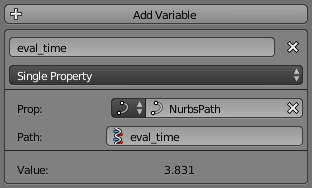 Now its time for the driver expression. You will need to know the ball's diameter and the curve's length.

Let's break the expression down:

Now the ball will roll accordingly to your curve's Evaluation Time:

Not the answer you're looking for? Browse other questions tagged animation rigid-body-simulation constraints or ask your own question.

19
How do I rig a BB-8 robot?
5
Making wheels spin as car moves on local Y axis
3
Rolling cube animation. How to?
0
Rigging a Wheel to Turn Corners: Drivers vs. Bones
1
How to rig a BB-8 Model?
0
How to Dribble soccer ball?
0
How do you control the forward movement of a sphere to be relative to a specific point on its body?

3
Scripting — Can't figure out how to use correct contexts?
3
constraining an empty to the intersection of two coplanar segments
3
How do I make an object move along a path in either direction?
0
Workflow: iterative rigid body array/curve tweaking, is there a better way?
2
Wave Modifier Physics
0
Rigid Body Physics Rolling Ball Won't Come to a Stop
1
initial velocity for a rigid body simulation: a ball rolling on a skew plane
0
Rigid body following path