I have a cube that I am trying to cut a hole in. The star shaped long piece is two scaled cubes joined together as one object. Originally, this cube had a Nurbs curve modifier as well. What I'm needing is for the cube to have a hole cut in it and then have the cube follow along the curve. 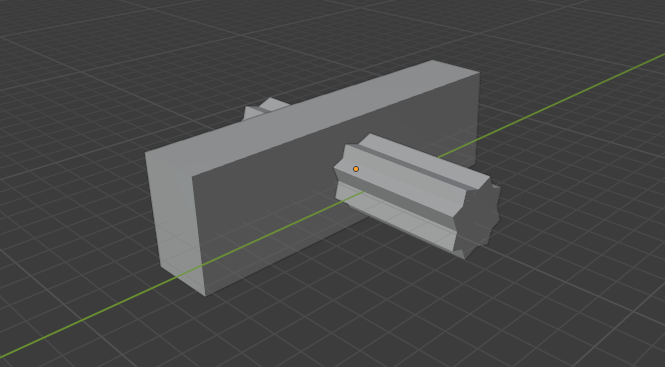 I originally tried curving the cube and was trying to put the hole in after so as not to mess up the dimensions of the hole. When adding the boolean difference modifier, the cube disappears and the piece that is supposed to be the hole remains. Issue is that it does this no matter which way I perform these operations.

I have tried rearranging the order of the modifiers, removing the curve modifier and adding the hole first and vice versa, removing doubles (which as I understand is "merge by distance" in blender 2.9), and I have tried both the cube and the star piece with and without loop cuts in both the horizontal and vertical directions.

The problem is that one of your two objects to be used in a Boolean operation is the combination of two joined objects. You don't want that. You want only one object being Booleaned with only one other object. You can fix this simply by separating the joined objects (go into Edit mode, press p for the Separate menu, and then choose to separate by Loose Parts), then Boolean those two newly separated objects together in Object Mode with a Boolean Union operation. Doing this will make the two previously unjoined objects truly one object, which they actually weren't before. After doing that, you can attempt your Boolean operation mentioned above, and it is very much more likely to work.

There is a chance this will not work, but try intersect instead of the difference setting tha tyou are on now in the boolean settings. It seems to work when I try things like this.

1
Boolean difference makes all geometry disappear on a scaled, solidified half-cylinder
0
Why won't the boolean modifier work properly?
0
Boolean intersect with plane makes object disappear
0
Boolean modifier not applying
1
Curve modifier does not work when you merge another curve to the original curve
0
Boolean Modifier Dissapearing
0
I have a problem duplicating a Mesh and again applying curve modifiers to the copy correctly?
0
Why doesn't my boolean difference modifier work?