How can I know where the normal ring is convex and where is concave?

Normals to understand - How can I know where the normal ring is convex and where it is concave? 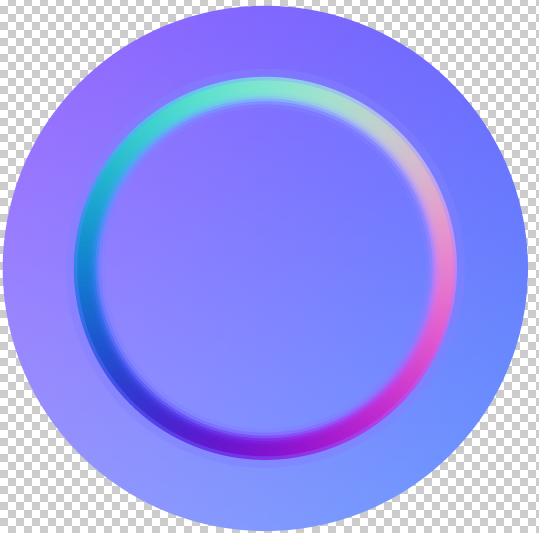 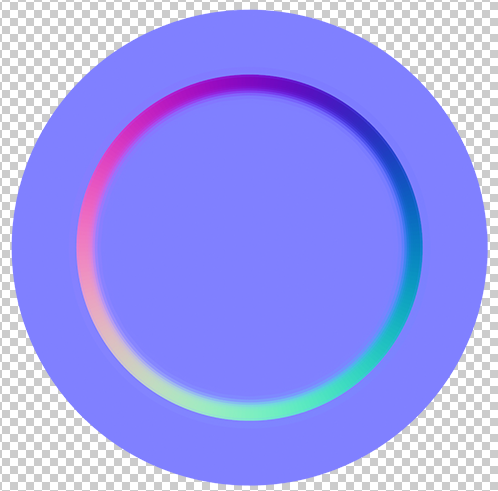 This is a Tangent Space normal map.

That is to say, blue (Z) represents the interpolated normal of the underlying geometry, red (X) represents a tilt towards the tangent direction, which is positive X in the UV, (texture,) space, as mapped onto the surface, and green represents a tilt towards the bitangent direction, which is positive Y in the UV space, again, as mapped onto the surface of the geometry.

To quote directly from the Wikipedia page on normal mapping - 'How it Works':

A normal pointing directly towards the viewer (0,0,-1) is mapped to (128,128,255). Hence the parts of object directly facing the viewer are light blue. The most common color in a normal map.

A normal pointing to top right corner of the texture (1,1,0) is mapped to (255,255,128). Hence the top-right corner of an object is usually light yellow. The brightest part of a color map.

A normal pointing to bottom left corner of the texture (-1,-1,0) is mapped to (0,0,128). Hence the bottom-left corner of an object is usually dark blue. The darkest part of a color map.

From this, you can see the top disc is convex, and the bottom disc concave.

First, I try to explain it in a shorter way. Further in more detail if something is not clear. 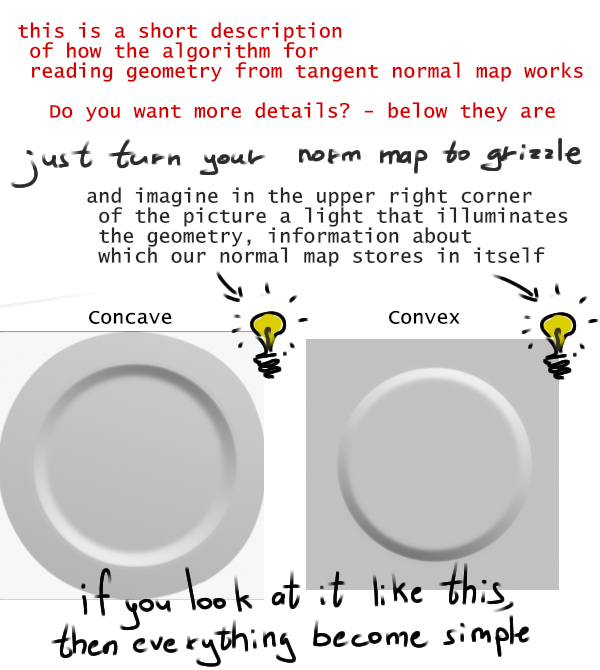 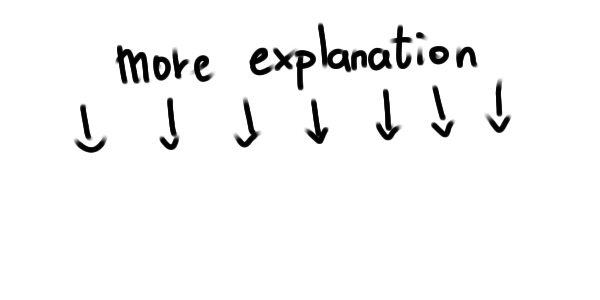 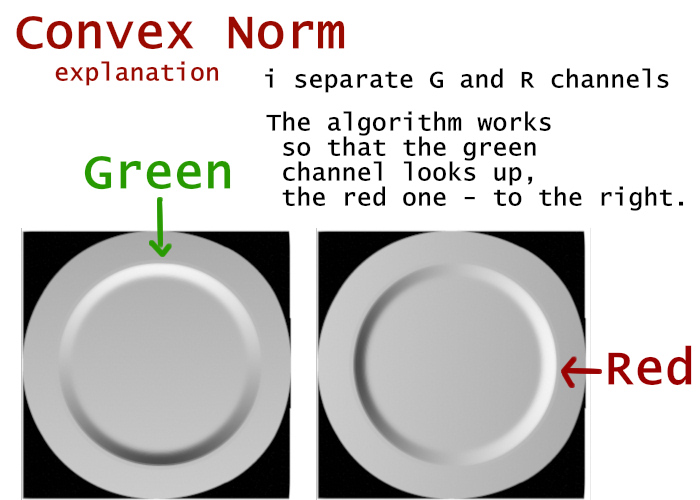 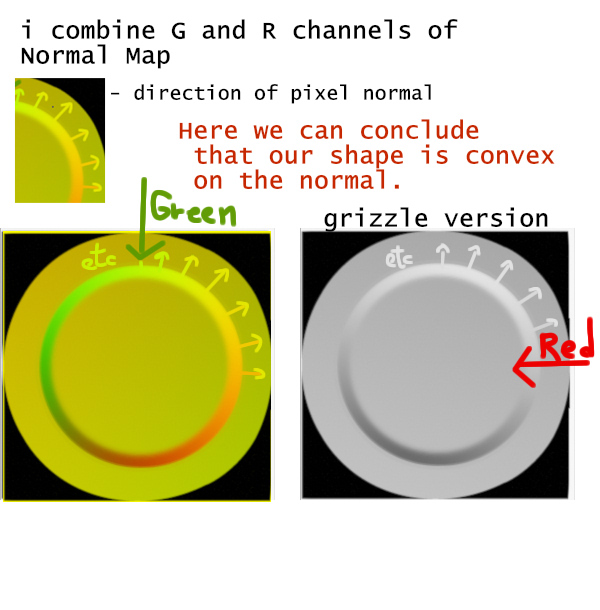 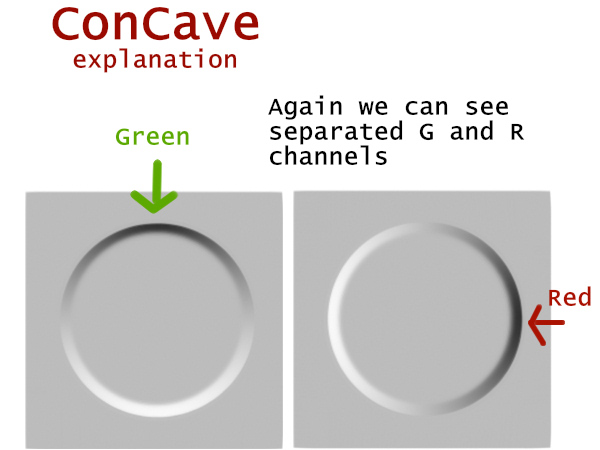 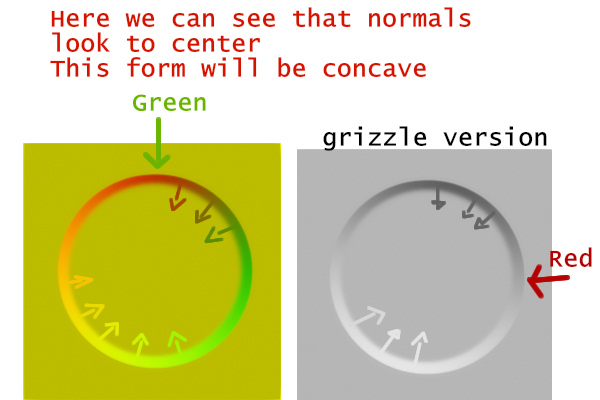 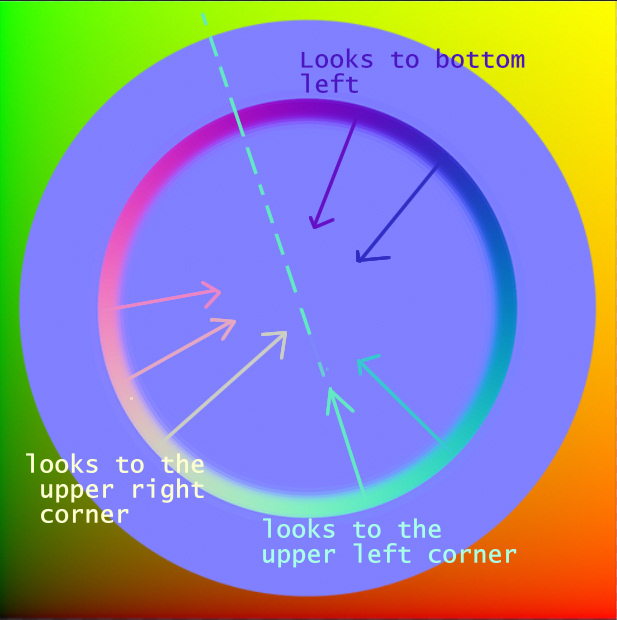 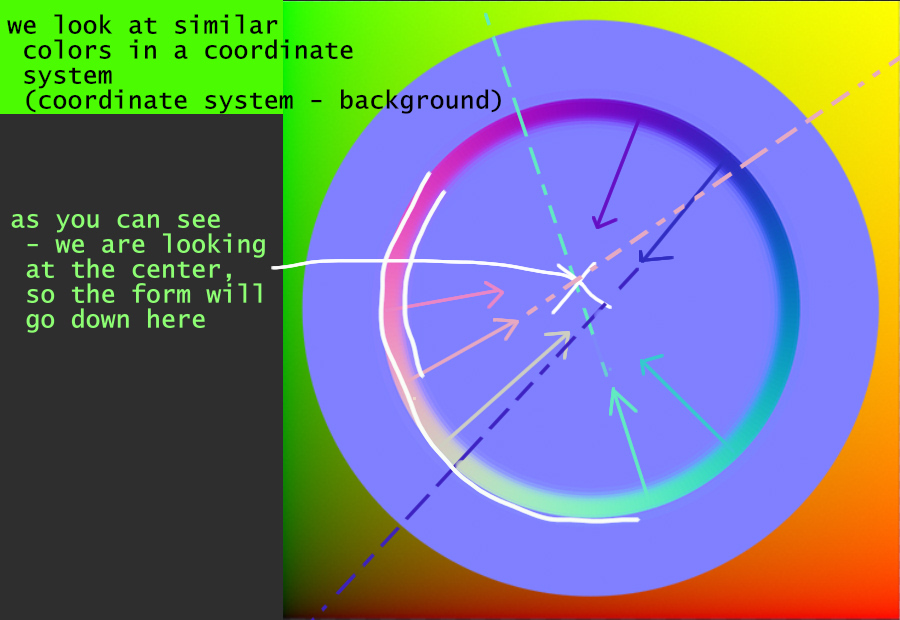 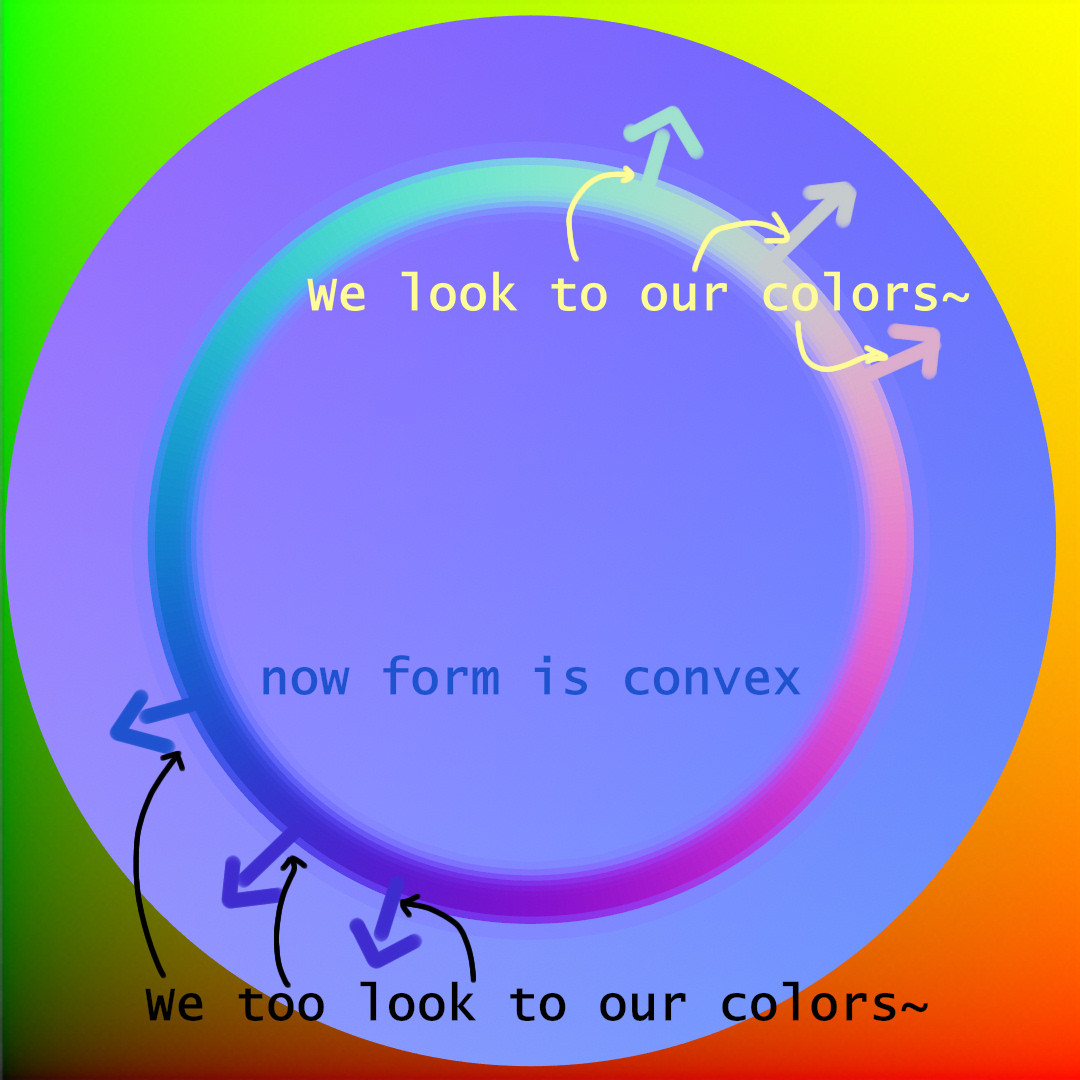 (So, before anything else: if you're going to listen to this answer, please use your own head as well :) I find 3D math difficult, even though I enjoy it, and I'm working this answer out as I go. The output is what I want, which suggests that I did it right, but I'm not sure, and I don't want to make myself out to be an expert-- I'm only offering what I think is right, in case it or the thought processes it involves are useful.)

Now, how to evaluate whether our normals are convex or concave in some particular axis? By comparing offset normals-- that is, we want to see how our normals change as we travel across our UV: 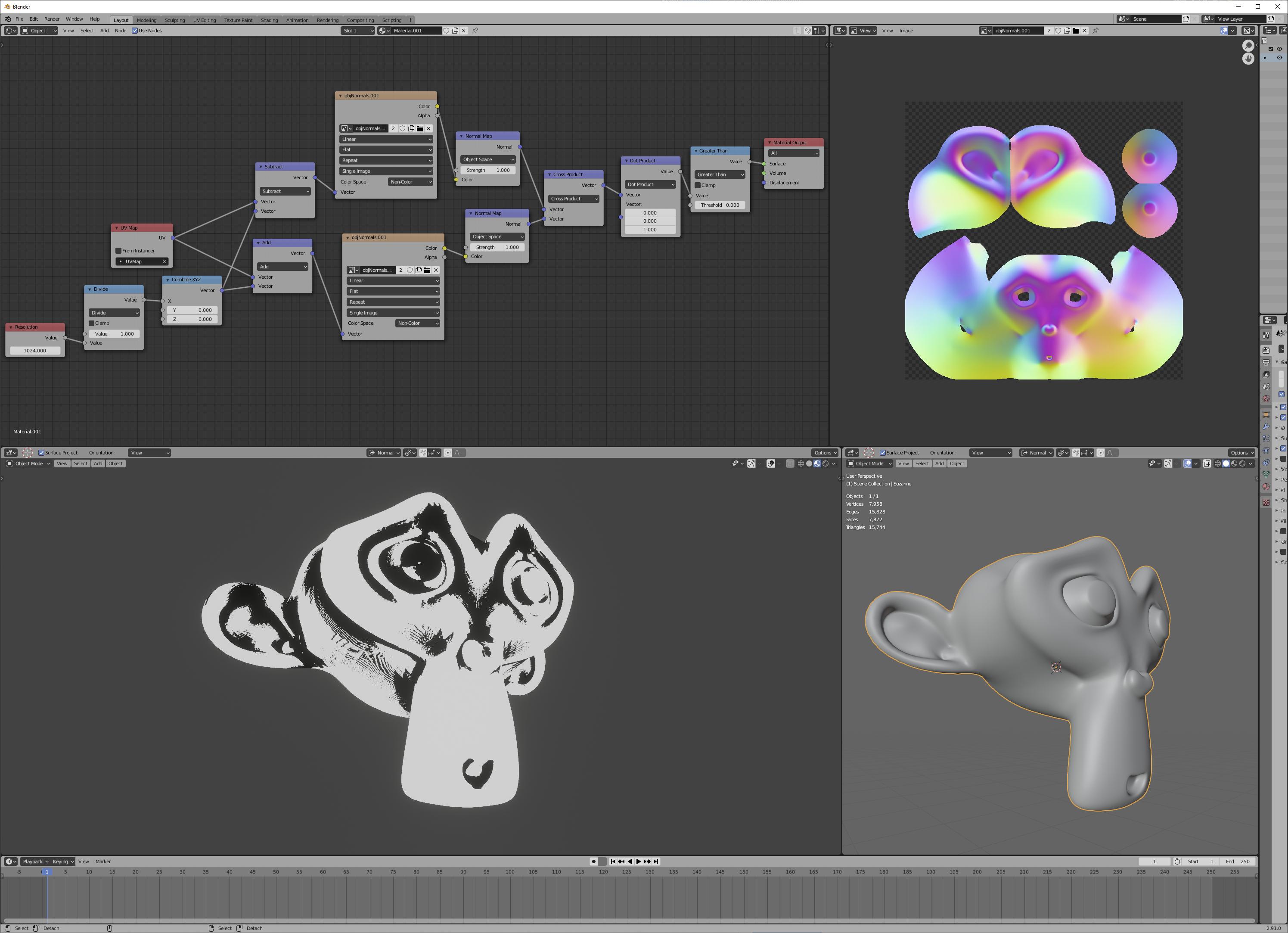 Blender isn't really great for doing this. A decent game engine shader could get you delta(normal)/delta(UV) a lot more easily and more accurately; and really, this is the sort of work that would make more sense to do in compositing, except Blender just doesn't have the compositing tools developed enough to be able to do it without a lot of dumb busy work.

Not the answer you're looking for? Browse other questions tagged texturing normals normal-map or ask your own question.

9
How can a Normal Map affect the look of a model?
11
How can I customize normal in this way?
0
How can I get a smooth rounded shaped normal map?
4
How can a vertex have a normal?