How to avoid violating energy conservation when making shaders and node groups?

Recently a user on here offered a tip to be careful when making shaders so I don't violate energy conservation. Blender stores colors in the value range of 0-1. If you go above 1, then more light is being reflected than is being received and you get physically inaccurate results.

In order for materials to work well with global illumination, they should be, speaking in terms of physics, energy conserving. That means they cannot reflect more light than comes in. This property is not strictly enforced, but if colors are in the range 0.0 to 1.0, and BSDFs are only mixed together with the Mix Shader node, this will automatically be true.

So my question is, what scenarios would break energy conservation (other than what is mentioned in the documentation)? When do I need to be vigilant about this?

I've been making utility node groups for myself - an example is my Falloff Map node shown below: 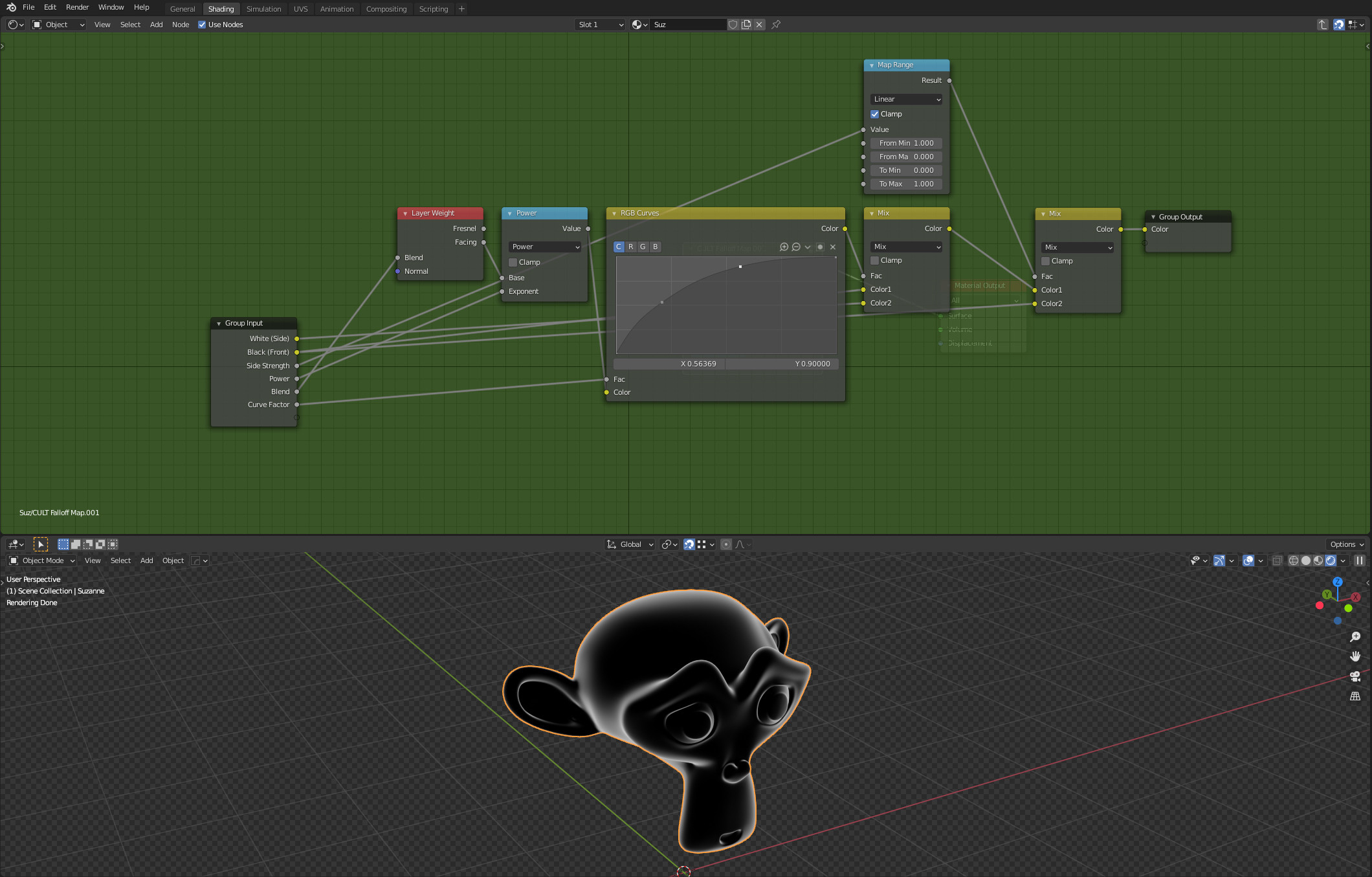 And this "texture adjustment" node group: 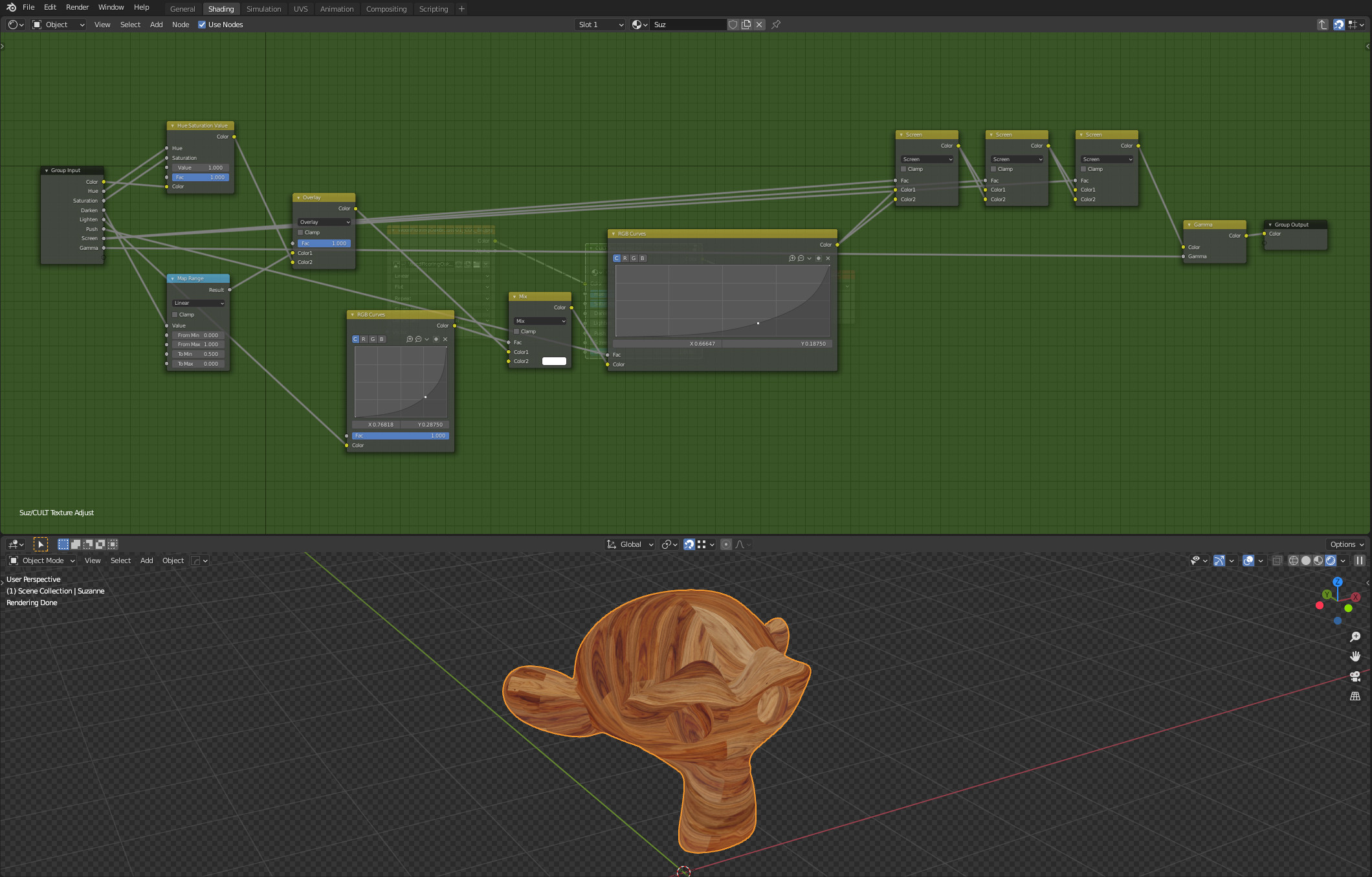 I'm a little concerned that my node groups could be outputting values higher than 1. For instance in the falloff map node group, I have an exponential "power" math node that then feeds into an RGB Curves node. Wouldn't the power node have the potential to output values above 1?

Another example with my "Texture Adjust" node group: I have three MixRGB nodes set to screen chained together for an alternate way to lighten a texture than simply adjusting brightness.

Is it possible that I am violating energy conservation with either of these node groups?

I am also aware of the ability to clamp values, but I usually leave it unchecked. Should I be clamping values as I go about building node groups?

I've attached both node groups so you can download and test them yourself.

Thanks so much for any advice or help.

It depends on how you're going to use the value.

Generally, anything that goes into a shader should be within the 0 - 1 range. 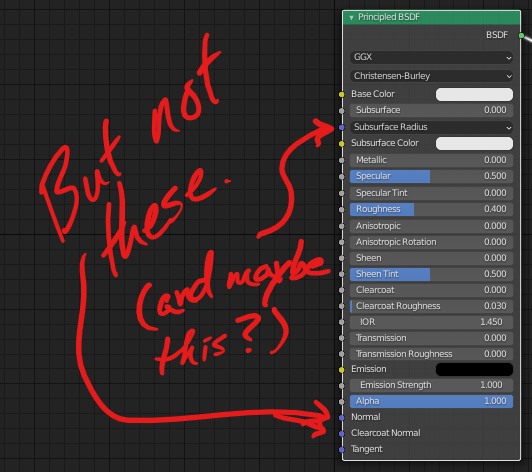 But not necessarily Normal values or perhaps Subsurface (theoretically in either case your model would have to be huge for this to make sense) because these values deal with scale or distance.

The same could be said for the Emission values, which turn the surface of your mesh into a light source.

When creating a mask you might generate values far outside the 0 - 1 range, but this may not be a problem. For example, if you want to generate a displacement map for a mountain range you need to generate bumps several hundred meters high. If, however, this has anything to do with Base Color or any physical property of the material, you will want to do something to normalize the value.

So what can you do?

You can check the Clamp button, this takes any value above 1 and reports 1 instead.

Or, if you know the new minimum and maximum values you're dealing with (you did the math), you can use a Map Range node to compress that larger range back into the 0 - 1 range.

Regarding when to clamp:

It depends, again, on what you want. Consider the following example which is a gradient with a value from 0 to 10. 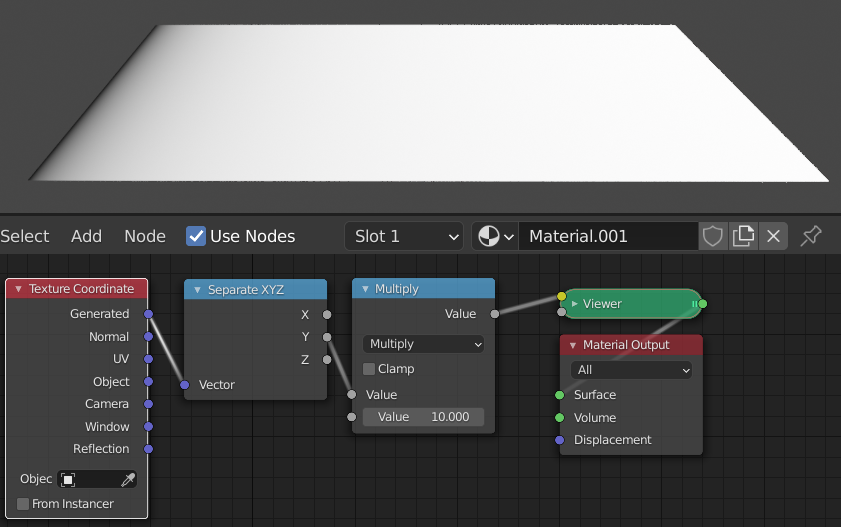 And then say we clamp the multiply. 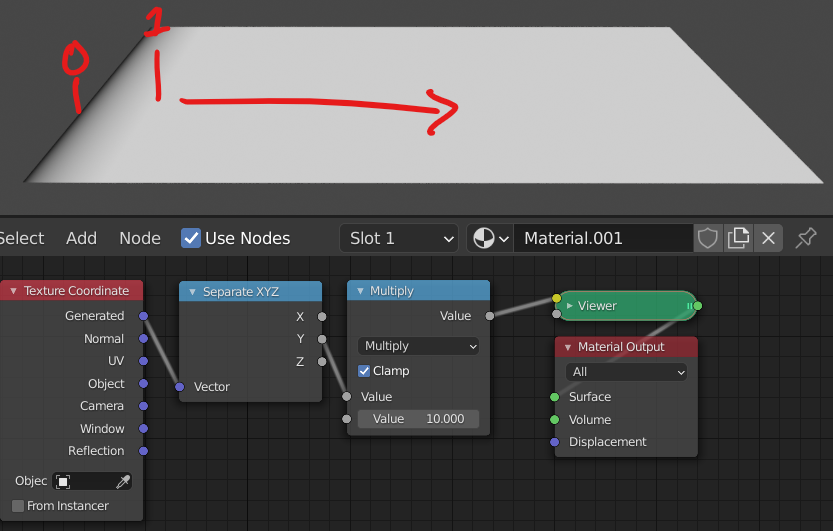 We have almost all of this plane with a value of 1. Now if we wanted to move this gradient over some we might subtract something from this, let's say .6 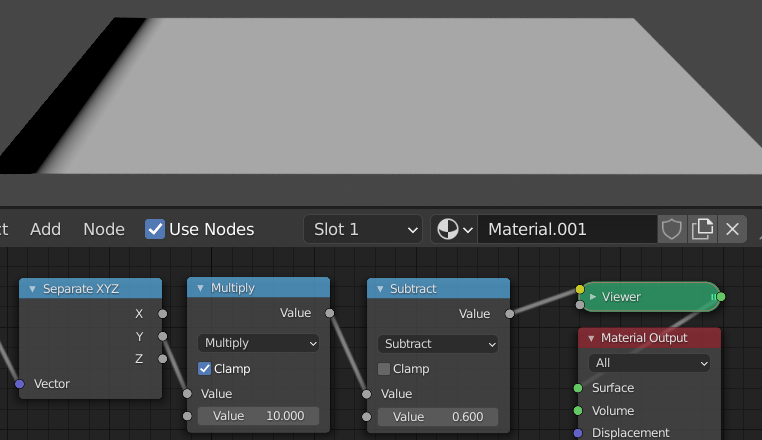 Well we've moved it but now the majority of the plane has a value of .4, and to boot it appears the portion of the plane that actually had a gradient has shrunk significantly.

That's not actually true because what we've done is create a gradient of negative values on the left all of which are represented by black. A whole other can of worms!

So probably what we want to do here is not clamp the multiply, so the subtract operation has some higher values to deal with, and then do clamp the subtract so that we don't generate negative values. 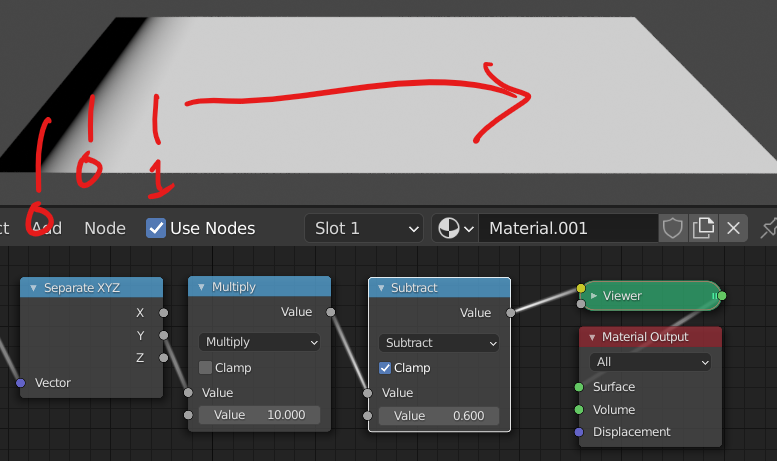 Of course, all according to what you want. If you want the short gradient ending at .4 you should clamp both!

So what are some specific things to watch out for?

You are now armed with this knowledge, you can never unlearn it. With regard to color you should now be afraid of basically any unclamped Mix operation aside from good old fashioned Mix (and that's only if you know the colors going in are safe in the first place), physical properties outside 0 - 1, and then specifically the Add Shader. 👍

Any times where I shouldn't clamp?

When you're operating on the coordinate space itself, you are necessarily operating on values above 1 and in the negative range. These operations shouldn't be clamped unless there is some particular behavior you're going for.

It may seem like a lot to maintain, but now you know. 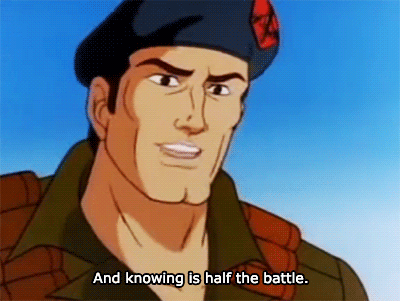 It is impossible to say whether the groups you show conserve energy, because whether or not they conserve energy depends on what values you send them, and they don't output shaders anyways.

If you want to conserve energy, and you don't want to clamp unless you have to, there are only various things to know:

I'm sure I could have missed some examples.

You use clamp checkbox

It limits outputs to only numbers between 0 and one

There is also a clamp node that does the same thing, but you arent limited to only 0-1 with the node

Not the answer you're looking for? Browse other questions tagged node-editor shaders mathematics or ask your own question.

2
How to avoid desaturation when using glossy material
6
How to remove duplicated node groups?
0
How to Name Node Groups
0
How to preset Blender shaders and textures?
3
Drivers and value limits on Node Groups
2
Photoshop-style color replacement ...using material nodes?