I'm having an issue I've tried fixing for literal weeks now. I've exhausted all the resources I could, but in short, I created an ultra low poly character that just WON'T rig right. I've attempted doing separate bones, and not using rigify, but ultimately, I imagine this will be a major pain when it comes to trying to do a walk cycle. In the picture, I've circled some areas I'm assuming are an issue, as I'm going with an icosphere for much of the joints (ankle, shoulder, elbow etc).

Am I doing something wrong, for why rigify is ineffective? Is using single bone setups like this feasible for movement and rudimentary animation? 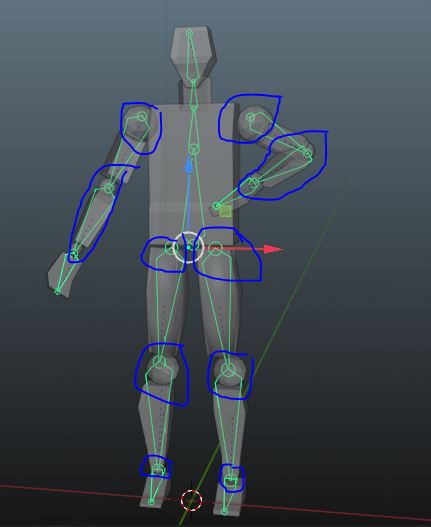 Using rigify will cause problems, especially if you have not cleared the scale. I would say as you have a character with many objects, go with making a rig and assigning each bone to each object. I have some very horrible experiences with rigify and going with bone by bone is much easier. As for if it is possible to do a walk cycle, yes it is highly possible.

Not the answer you're looking for? Browse other questions tagged modeling rigging pose-mode or ask your own question.

2
Rigging multiple meshes
2
Trying to create a rig from scratch - My mesh “handles” flip and scale
0
Rig with sticky feet and hands, how do I create arm swings? (ex: playing tennis)
0
Rigging is affecting both arms