I'm using Blender 2.9. I created a wedge, I sliced a box diagonally. I turned on the statistic, I see:

But why there are 8 triangles, can someone explain? 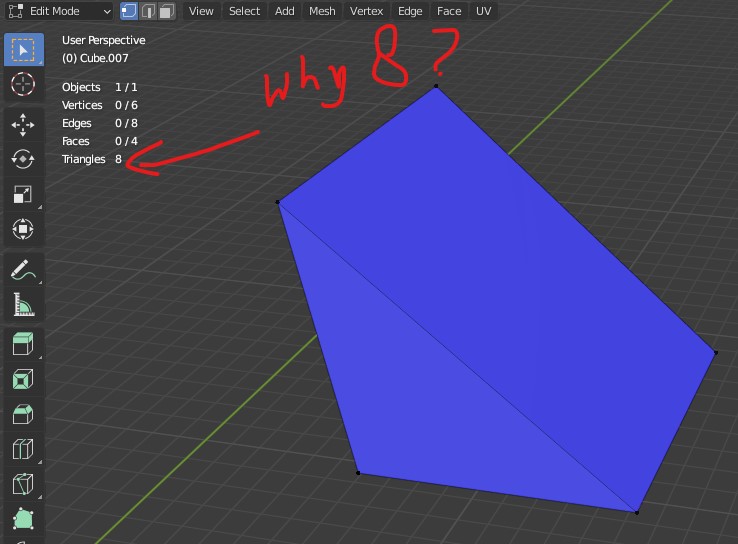 All render engines use triangles.

In blender, each face with 4 vertices is in reality two triangles. 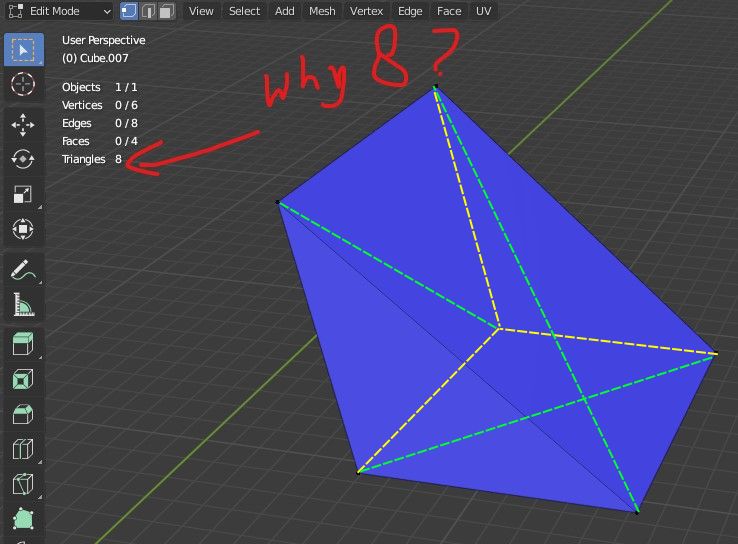 Faces are tessellated into triangles.

All faces are tessellated into triangles on render. The statistics gives us this conversion count using formula outlined here

One way to achieve the counts in question image

Any 3D software under the hood actually only 'understands' faces with 3 sides (tris). This is because for any 3 distinct points in space there will always be a single plane that contains all 3 points, so a tri is always planar. The same cannot be said about 4 points in space, as the fourth point might be offset away from the plane. So every quad is actually made up of two tris "under the hood", even if the edge that splits the quad into two tris is not displayed to the user. The same is true for n-gons, they are always broken up into tris even if you can't see them.

So in the stats the tri count includes the tris that make up the quads, each quad is 2 tris.

That's why n-gons are considered bad topology, especially for meshes that will be deformed by an armature: you don't know how the software will split the n-gon into tris and so you don't have as much control over how exactly it will deform, and different softwares might triangulate differently from each other, so if you have to import the mesh to a different software things might not look the same.

EDIT: My original answer was correct but incomplete. I am adding text to provide a complete answer.

The original question is incomplete and inconsistent. The OP says they "created a wedge [by] slic[ing] a box diagonally." They show what appears to be such a wedge, but they include statistics that don't match a wedge, as there are only 8 edges and 4 faces.

None of us should have answered the question as it stands. It should have been closed for lacking clarity and detail.

The naive answer to the question would be to simply limit the scope of the answer to the described object and the specifics and point out that the described wedge has 3 quad faces, each of which consists of two tries + 2 triangle faces, each of which has 1 trie for a total of 3 * 2 + 2 * 1 = 8 tries. The problem is that the answer ignores two errors in the statistics, if the geometry is in fact a wedge.

The next step would be to explain the existence of the error. This is what I did in my original answer:

Short answer: You have non-manifold geometry. 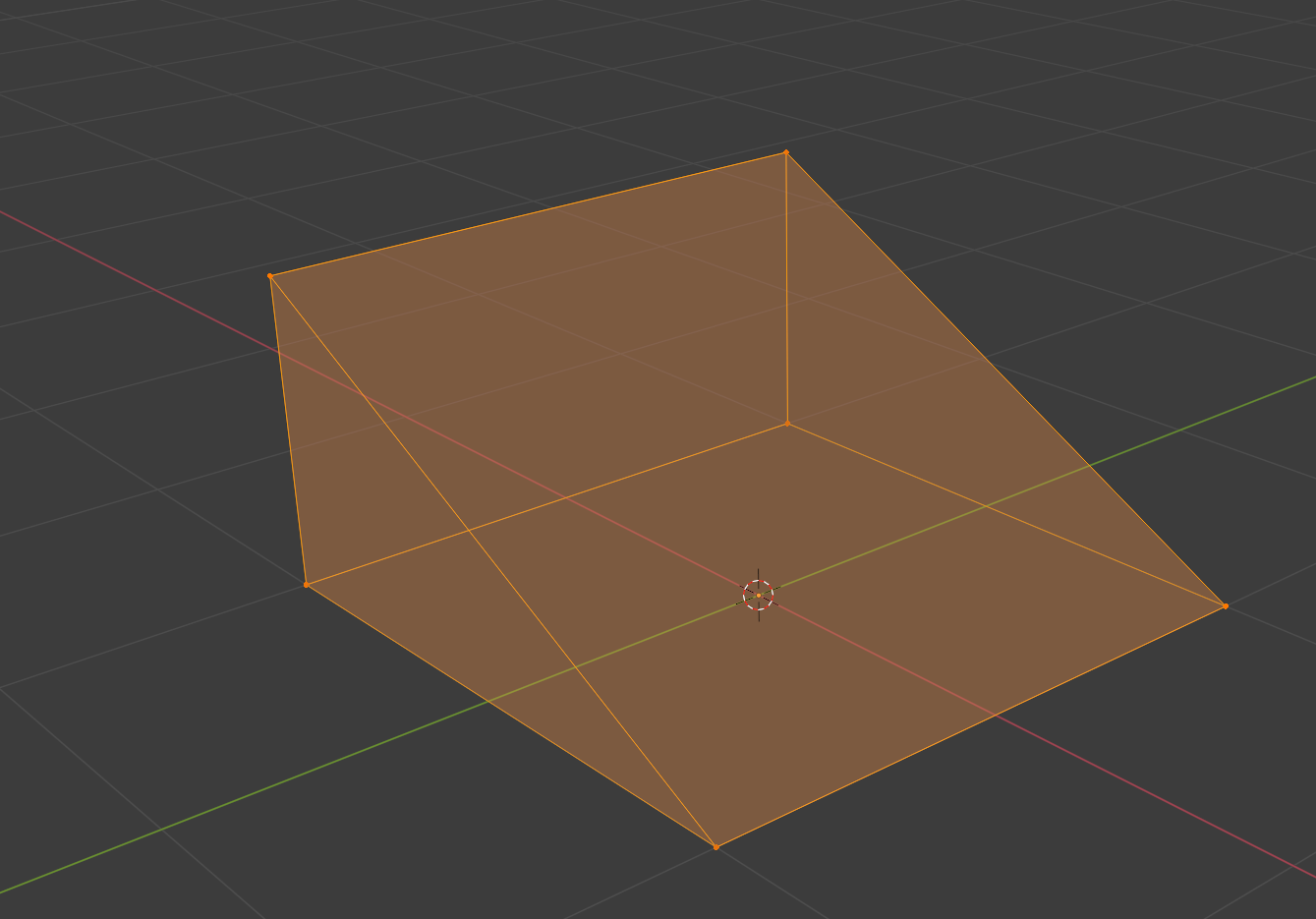 I can't actually come up with a manifold geometry that produces the same counts as you have.

There's something about your geometry, that's not obvious from the solid view, that is leading to the count you get.

You can count the edges, faces, and verts on my geometry and they match the counts blender gives. So why do I have 4 faces and 6 tries?

Because when you work with quads or N-gons, blender represents them internally as tris. You can actually see this by selecting all the faces and typing CTRL–T: 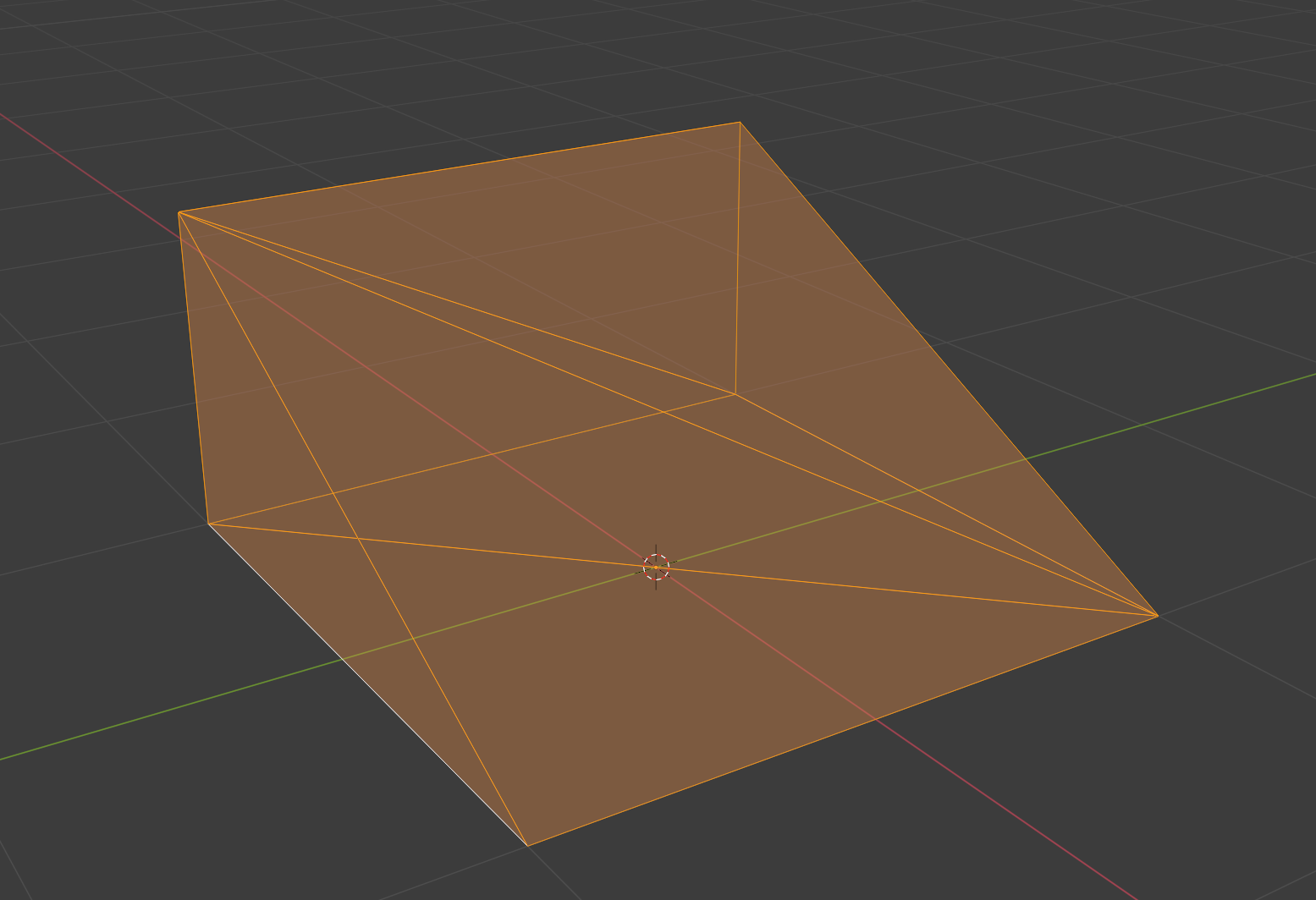 Of course, when you do this, you make the quads into tries so the numbers all go up. But it does show that each quad is 2 tries, not one, so the tri count for the original should be 3 quads * 2 + 2 tries

What I wrote was correct, but incomplete. It was incomplete because the third step requires something we should not do in an answer: speculation.

Since the statistics do not match the description or the object implied by the screenshot, what is behind that solid object?

The answer appears to involve creating an 6-gon consisting of all 6 vertices. I've added a Triangulate modifier to such a creature to make it easier to visualize: 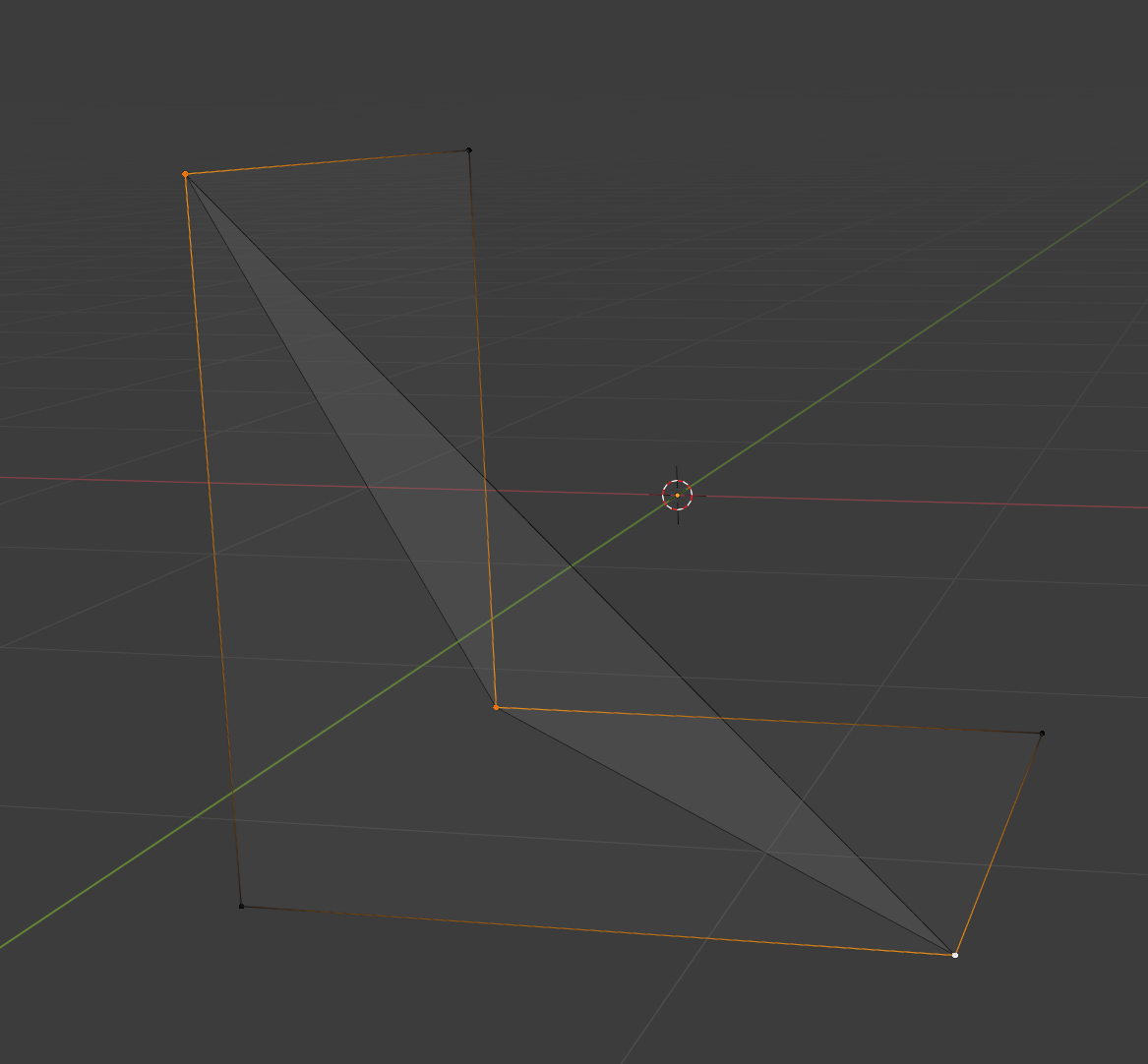 Now if I add the other sides to this I get geometry that matches the original counts: 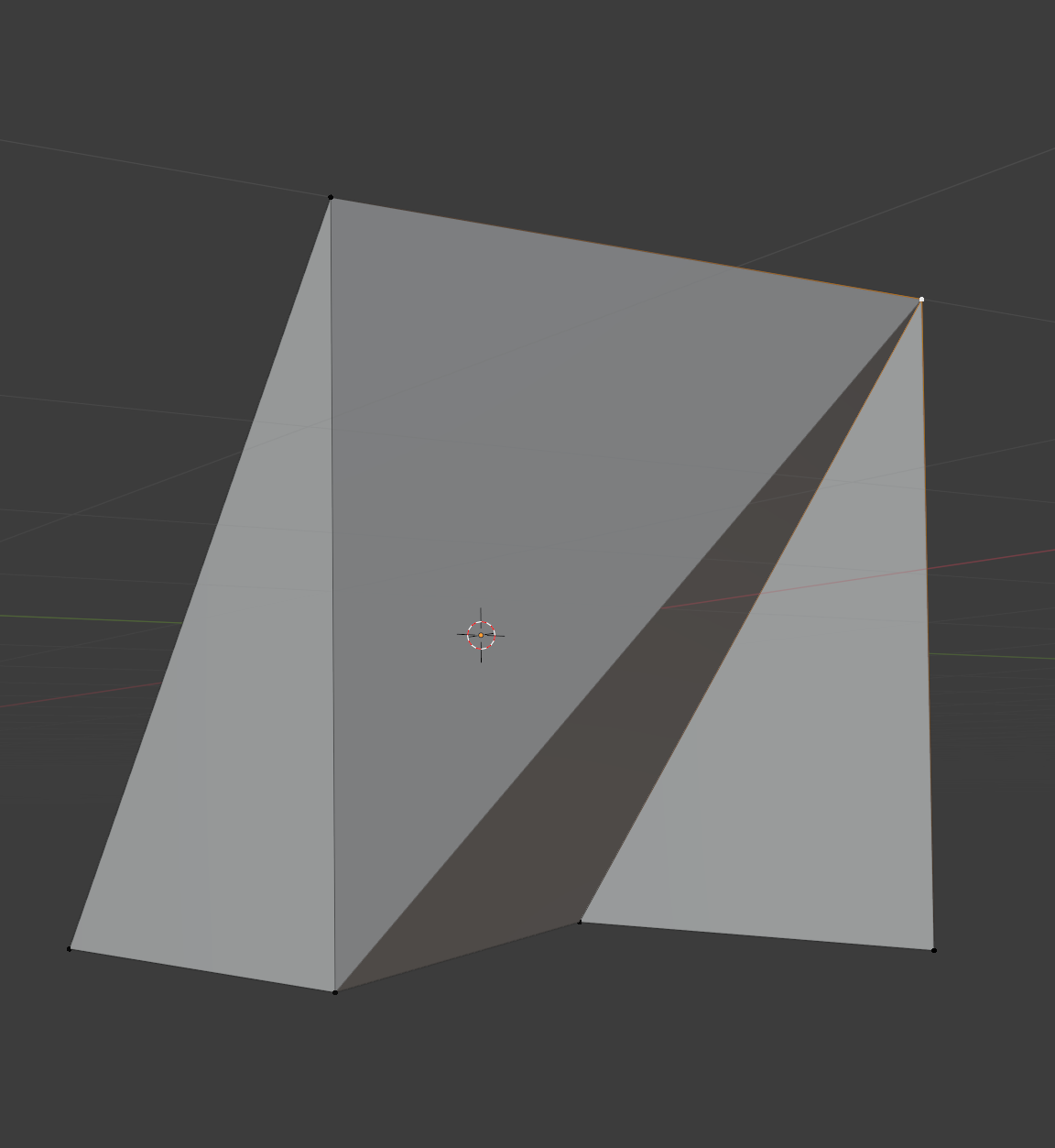 and, as you can clearly see from the triangulated version, this creation is non-manifold.

4
Finding Vertices, Edges, Faces, and Tris using Python
1
How can I temporarily disable a handler?

0
Use lattice on part of object
2
Strange Lines Appearing In Object View Wireframe Mode
2
Can I Automate Converting Groups of Triangles to Quads?
0
Remap wires or simplify triangles?
4
Why are some of these vertices being ignored by edge loop selection?
0
Blender 2.83 object selection not working correctly
1
Can't select vertices, edges or faces in box select mode