I am trying to create a scene where a paper gets shredded up when it hits the bottom of an escalator. Still at the 'learning Blender' phase where I have to use tutorials for almost everything, and I'm having trouble finding a good solution to this type of chaotic paper shredding. Especially since when you search, you mostly get real blenders shredding, if you know what I mean. I've looked into the fracture modifier but it seems to create particles rather than confetti-like slivers. Do I need to manually create the shreds? Or does anyone have a good method for paper shredding? Thank you!

The passport is made from a dissected cube with one half hinged up a little from the fully opened flat state. The paper is from duplicating the two upper faces of the green cover and separating those with 'P' (in Edit mode) so paper and cover become two individual objects. The paper is raised a little so it's a whisker above the cover, then parented (CTL-P) to the cover to form the complete passport. (child=paper)

The paper is given it's own material slot and coloured white.

The complete model is animated face up to slide down the 'escalator' and into it's workings at the bottom. The descent keyframes are set to 'linear' and that changes to a much lower speed when it's being drawn into the mechanism. It's also rotated a little as it's being drawn in.

Two (invisible) emitters are placed at the bottom. One to eject shredded paper, the other to eject torn pieces of (fabric) cover. Both use identically shaped 'particle objects' (debris) which are held in Layer 2. Layer 2 is not rendered out. 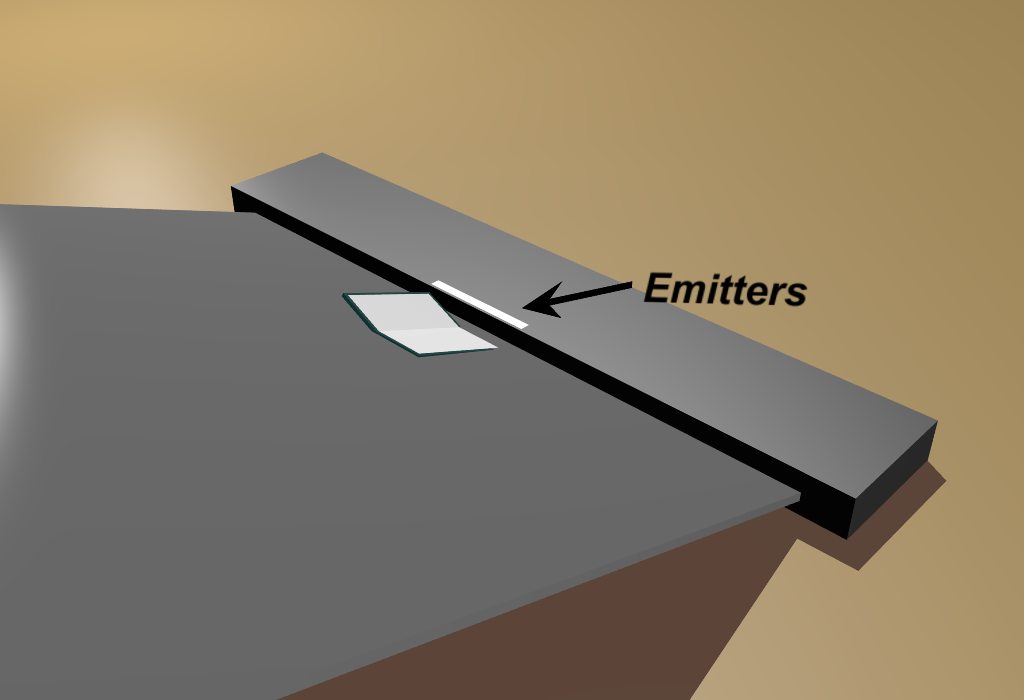 Each debris object uses the same material slot as it's non-shredded kin and the cover debris is scaled up in it's emitter to be much larger than the shredded paper. It's also ejected a little further than the paper.

The passport begins to enter the base cube at frame 73 and particles start ejecting a frame later.

The number of particles for each has to make the ejection dense enough and with enough particle velocity to appear like the machine is shredding with enthusiasm until a few frames after the passport disappears.

The base cube and floor are set as 'collision' objects so particles can't can't penetrate and fall through. Both the floor and base are set to 'kill particles' on contact.

The details for Newbies - The Paper shredding...

The emitters are merely subdivided planes and have different settings so they eject cloth and paper a little differently. They are placed a fraction above the base cube. i.e. OUTSIDE the cube, not in it. (They'll be invisible)

You can experiment with the emitter sliders & buttons but keep a reference copy of the Blend file intact.

Set the velocity etc to have them ejected as far, as high, and in the direction desired. That's all taken care of in the particle's 'velocity' and 'rotation' panels.

Make a particle object that will become the shape of the paper debris'. Store that in a spare layer or collection. Don't allow Blender to render that object. It's there as a reference object only.

The debris object itself is an ordinary plane (or any other object) that's deformed manually and coloured white. Give it a name.

Open the Particle's "Render" panel and tick "Emitter" & "Died" boxes only. Click the "Object" button. That directs Blender to use an object for the particles.
Enter the name of the paper debris object you created in the other layer/collection. Tick the "Scale" & "Rotation" boxes, set the "Size" value as required.

In the Particle's "Display" panel, click on the 'Rendered' button. (that's usually the default anyway)

The physics shouldn't need anything changed from the default "Newtonian".

Once it's working right, give the emitter a Material slot and set it to fully transparent and without Specular so it won't be ghosted.

Duplicate the paper's emitter and in the Particle settings, click the minus button where you see it's name at the top. If you don't, you'll be adjusting the paper emitter instead.

Click on the plus button to produce a separate one. Name it 'Cover'.

Raise it a fraction so it's off the other.

This emitter behavior needs to be a little different from the first. You an see it's settings in the Blend file.

I would recommend using a fabric simulator, and having sewing holding the pieces together until they hit the bottom, where you animate the sewing strength to zero.