How can the Levels compositor node be used?

I was looking at the compositor output nodes, and I saw the Levels node. The wiki says:

The Levels Node takes an image as an input, and can output a 1D value based on the levels of an image. It can read the input's Combined RGB, Red, Green, Blue, or Luminance channels. It can output a Mean value, or average of values, or a Standard deviation, which measures the diversity of values.

However, the wiki says nothing on how to use such a node. So, how can I visualize the data the Levels node outputs?

This node will output a single float value based on input image. 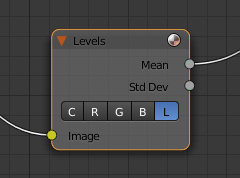 The visualization of such data is just a grey rectangle.