I've got a scene where I'm trying to get a cube, to travel at high speed and collide with another cube, I'll call them cubeA and cubeB. I animated cubeA to start far off in the distance, away from my camera's vision (so its not visible earlier on in the animation), then to pop in closer, and move towards cubeB which it is supposed to be colliding with.

I've applied rigid body physics to both cubes (and the plane underneath them), and keyframed the 'animated' and 'dynamic' properties so that they start animated, a frame before I want the simulation to start I have another keyframe of it being animated, and then there is a keyframe setting it to dynamic. (CubeB's keyframe setting it to dynamic happens a bit earlier than cubeA)

However, for the cubeA, when the physics simulation starts it just teleports to its original location, and stays there, it doesn't even fall because there's nothing underneath it at that location, even though on that same frame as the simulation starts it has a keyframe for an entirely different location. I've tried moving this location keyframe to the frame before the simulation starts, but it didn't seem to fix the problem. I don't know whether this happens with cubeB because it stays in its original location the whole time.

Previously I had problems with the physics simulation rotating my textures, but I think i fixed it by applying my scale. I don't know if the two problems are linked.

The cube's materials contain peoples faces, as this project is an intro for a YouTube channel, so I've taken screenshots in solid view: 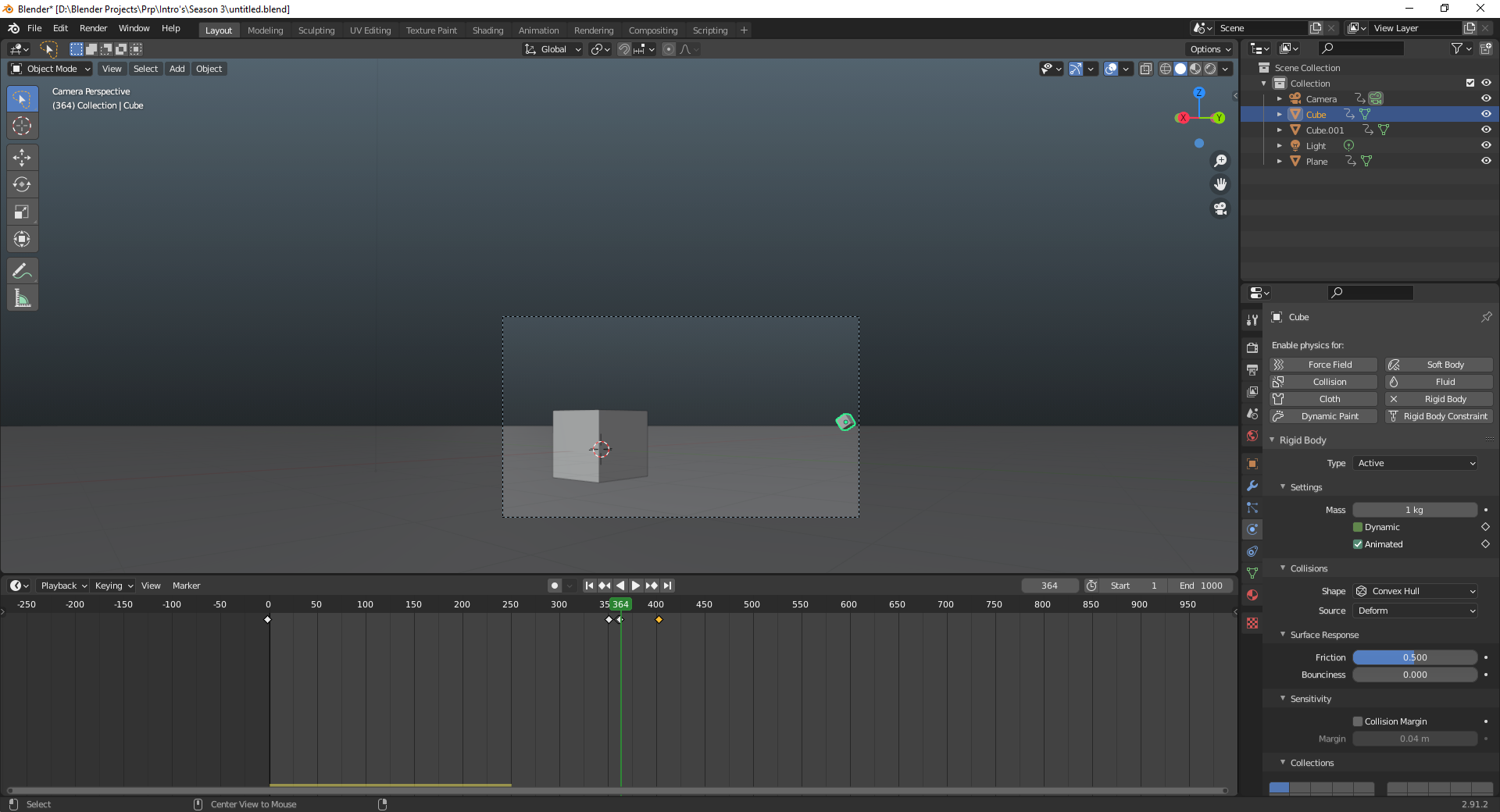 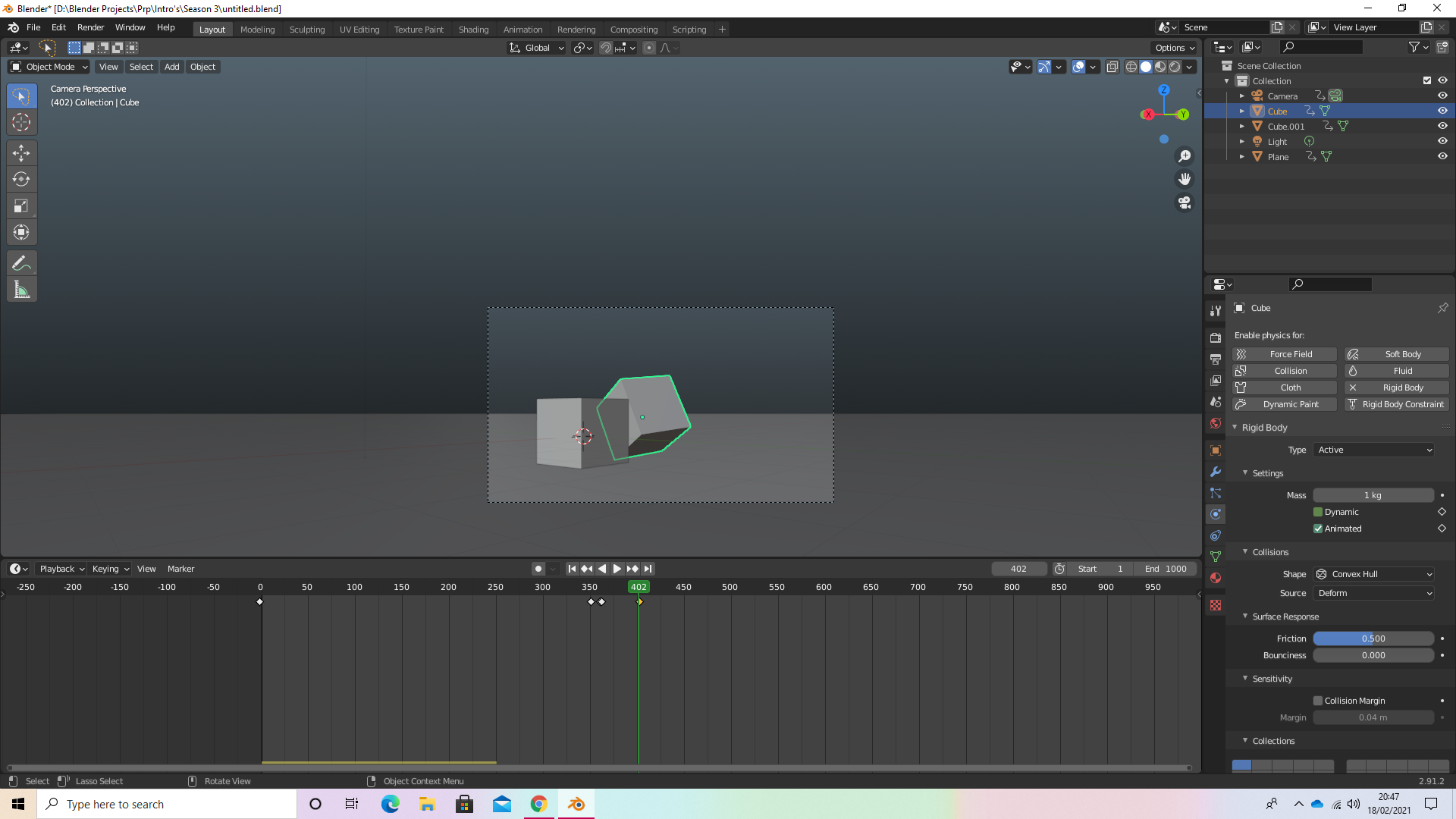 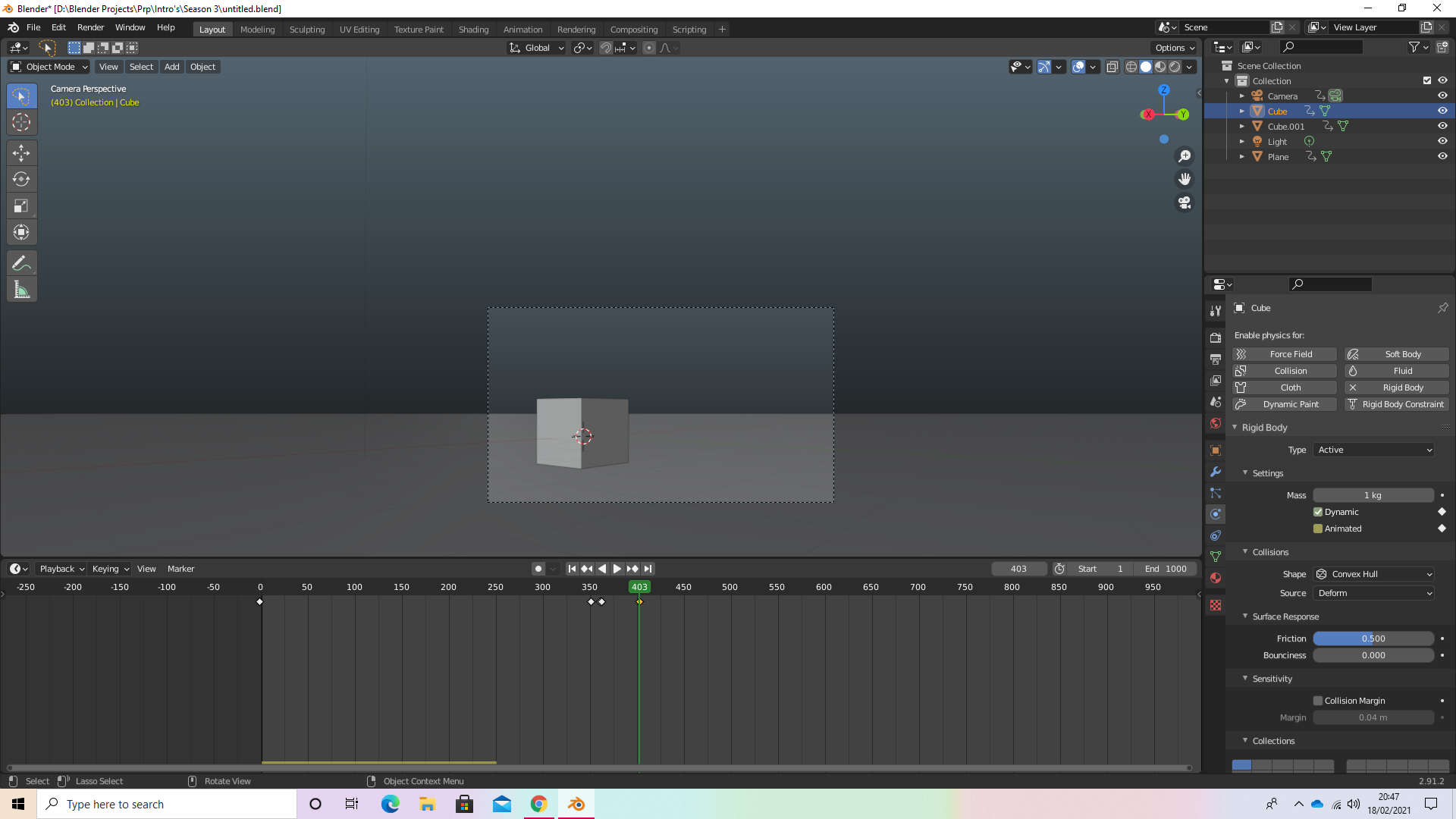 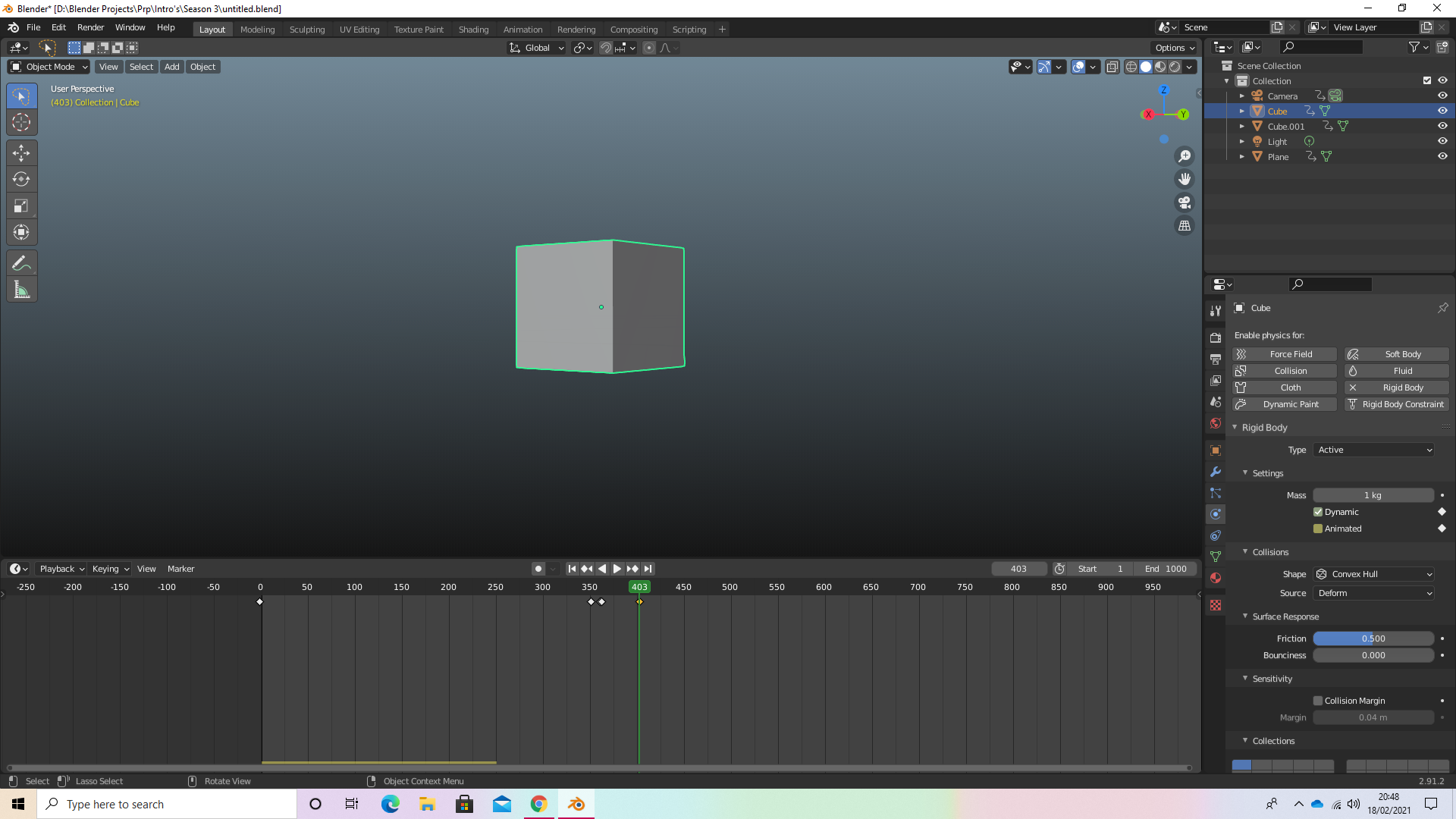 Image 1: Cube is out of view of camera before animation

I did a save as to a new blend file so I could add it to the question, and the cube no longer teleports. Now, when the physics simulation starts, it just stays where it is and doesn't move, and doesn't hit the other cube. I just have no clue anymore! 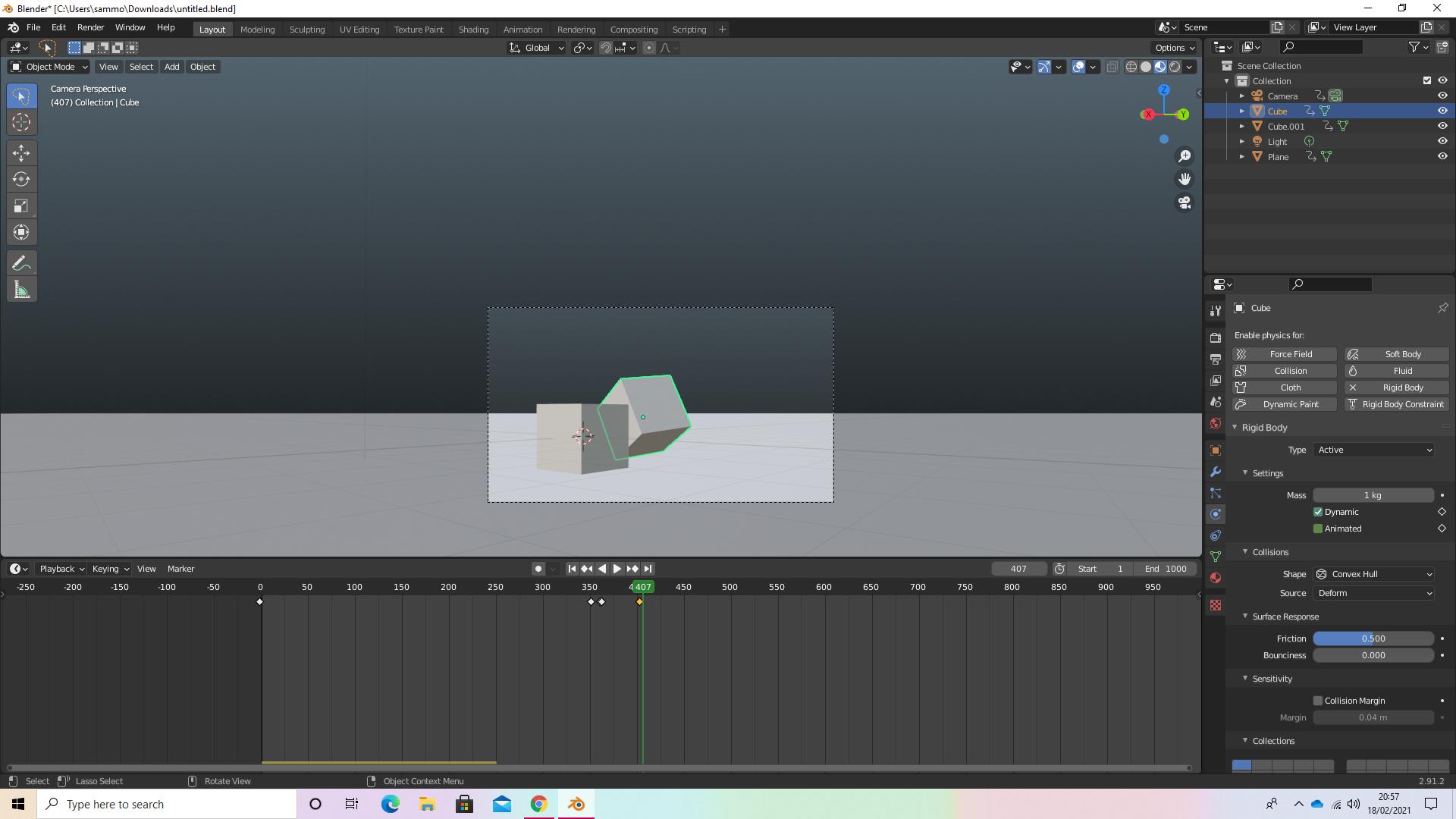 The file can be found here

I am new too, but I think the answer is that you enable the "animated" not to just being keyframed, but entirely throughout the animation. I hope this helps!

Not the answer you're looking for? Browse other questions tagged animation rigid-body-simulation rigidbody or ask your own question.

10
Getting the location of rigid body object at current keyframe
4
How to get frame-by-frame object location in Blender 2.8+
0
How to scale active rigid bodies during simulation in blender
1
Dynamic and Keyframes
1
rigid body animation start at keyframe