How to add golden line to my maps?

I have used displacement to create a map (based on a heighmap) Now I would like to add golden topographic line. I succeed to have :

Please find attached an image of my situation 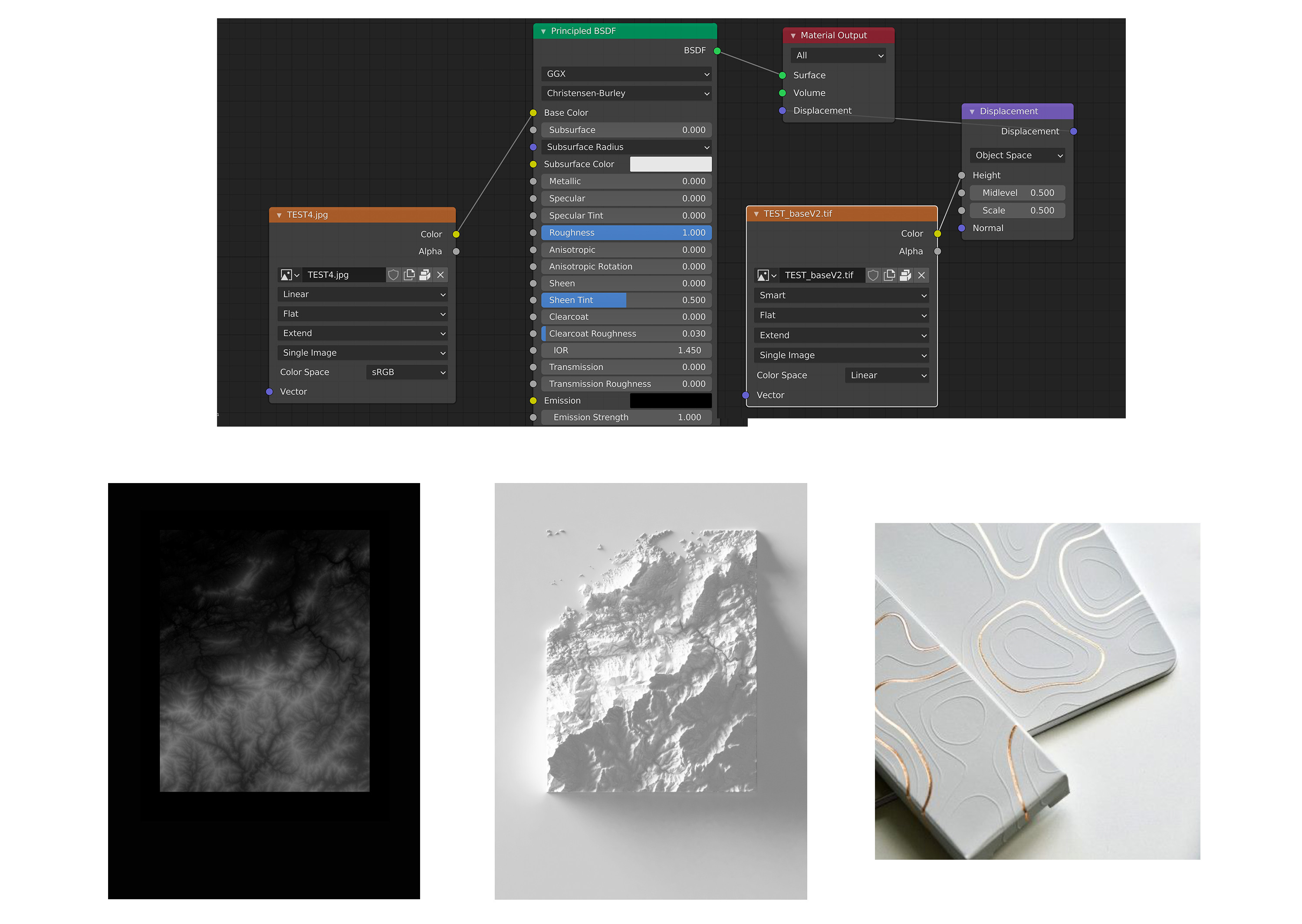 Thank you very much Carlo. I have been able to reproduce your work. only a small issue remains : The lignes does not have always the same thickness. On valley, the lignes sometimes are as large as the floor. I added an image in my main post for explanation 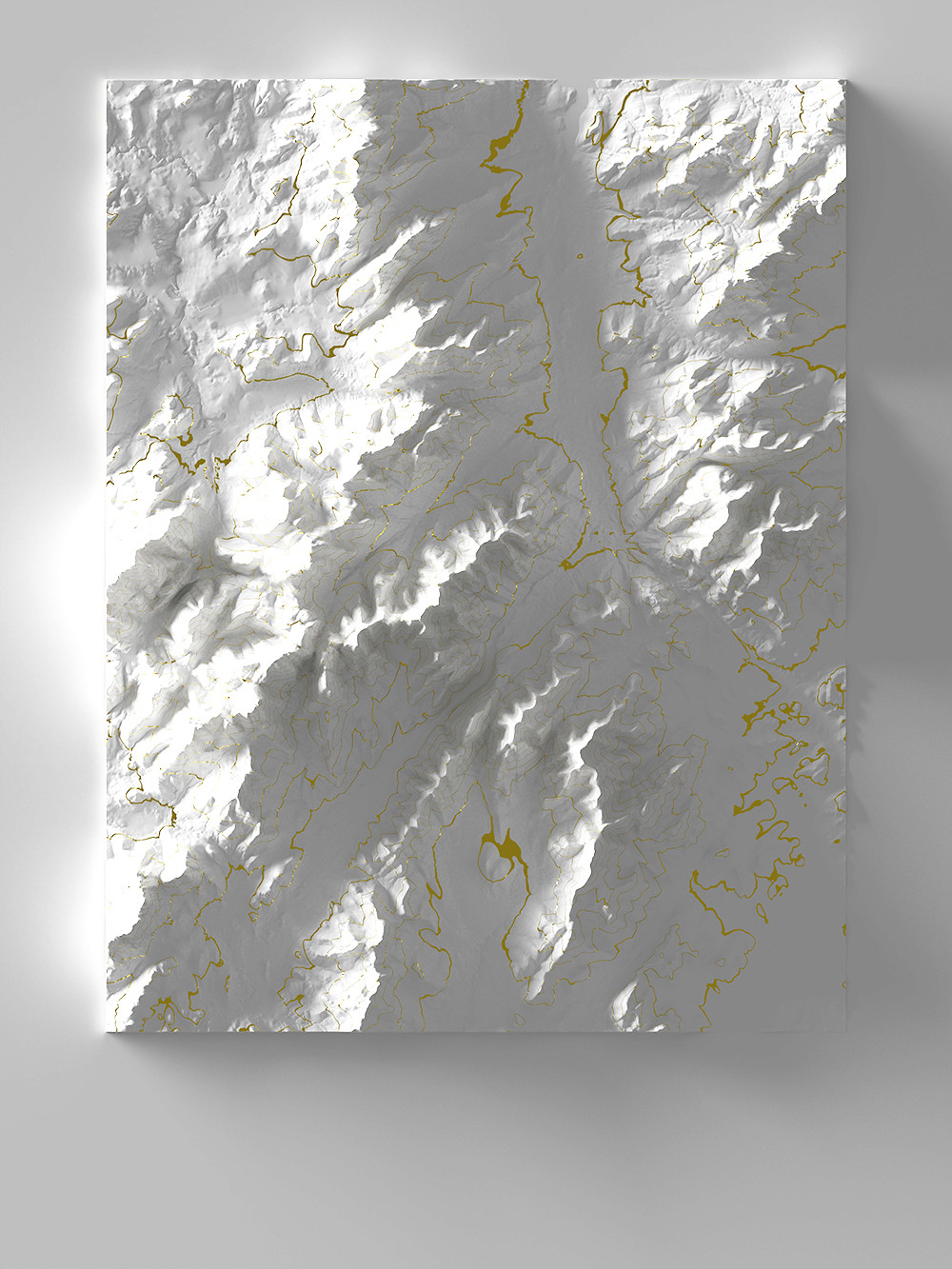 There are several approach you can take, the easiest is to build a shader that is capable of recognizing the isolines (lines that have something in common, the same Z in this case).

Start by adding a texture coordinate node. We'll use the object coordinate (the position of it's origin in this case) as a starting point.

Whit a separate XYZ node we isolate the Z channel: 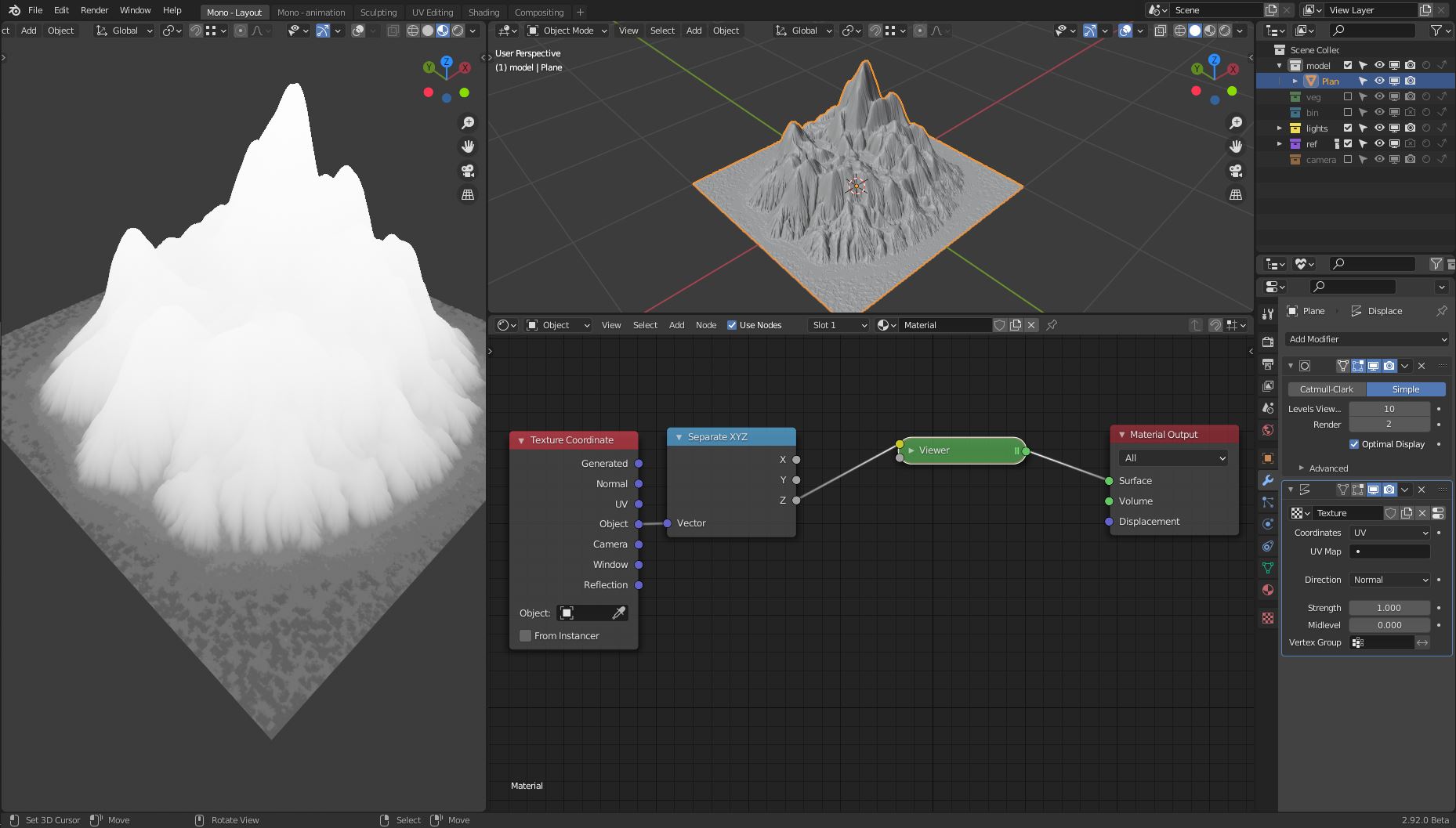 Then we use the math "modulo" node to subdivide the Z channel in several segments, and the math "compare" node to extract an interval from each segment (you can use a color ramp if you want a smooth edge). 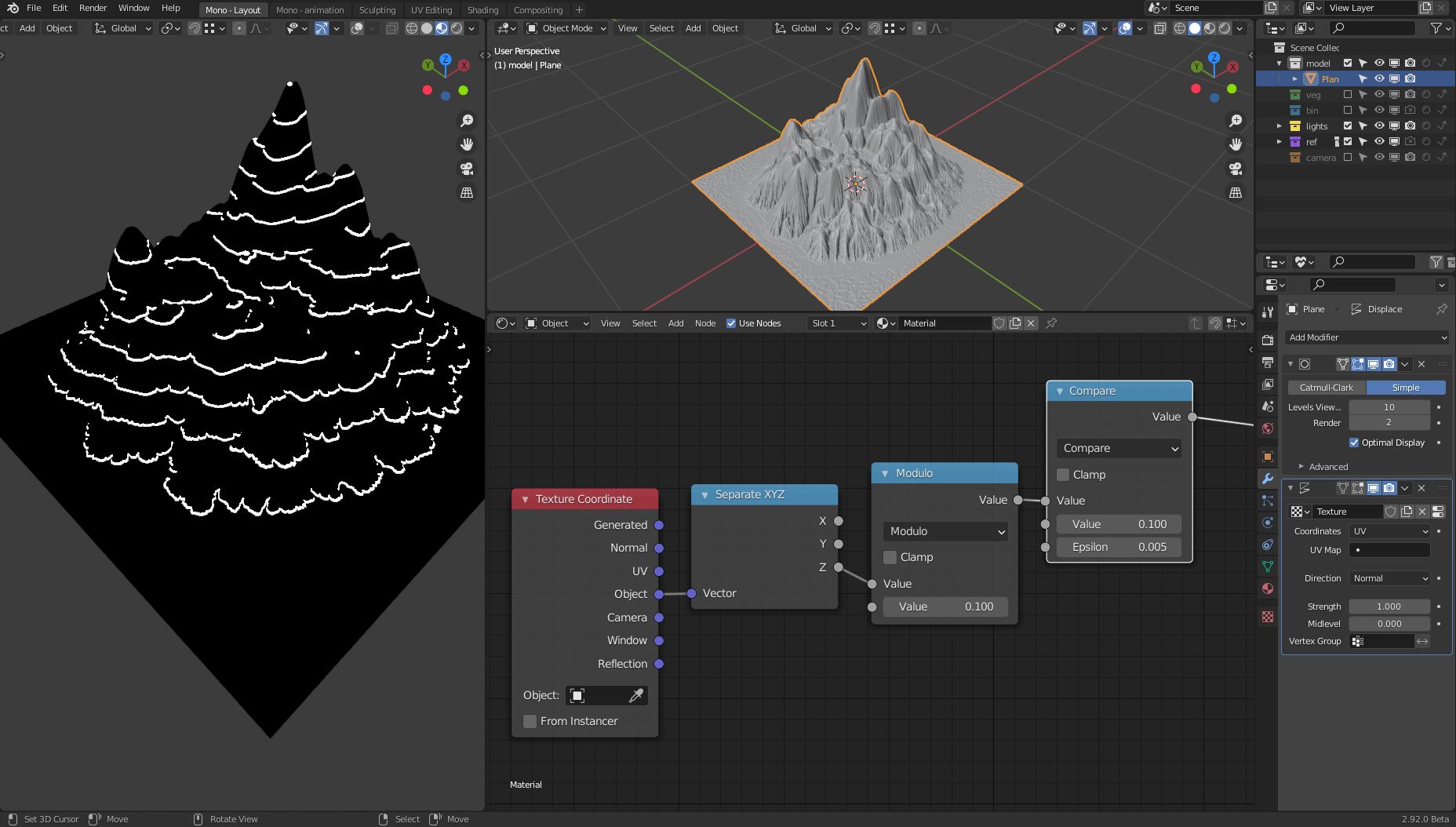 We basically obtained the lines, now we just need to use the results as mask for the mix shader node between our two shaders. 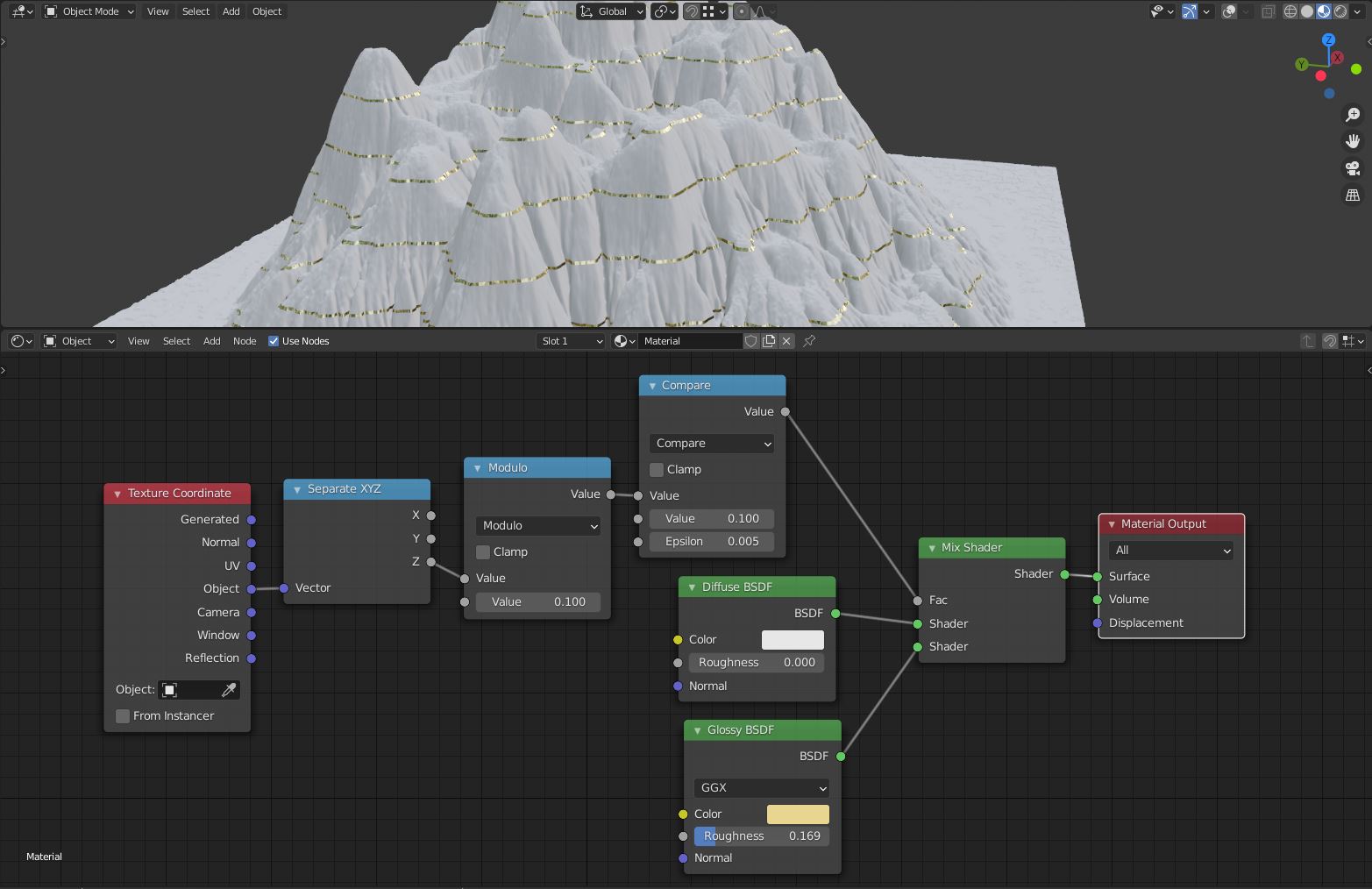 You can use an (epsilon) range around the desired contour-heights as the thickness of your contour-line, here using a Ping-Pong node to get a triangle wave in Z, and a Compare, with an epsilon around wave-zeros.

Then you can modify the epsilon, making it smaller on shallower slopes, by multiplying it with the arccos of the Z-component of the surface's normal at the shading-points. Here in Object-Space, assuming the object is Z-up:

This corrects from a simple slice-by-Z, on the left, to contours with even thickness, on the right.. 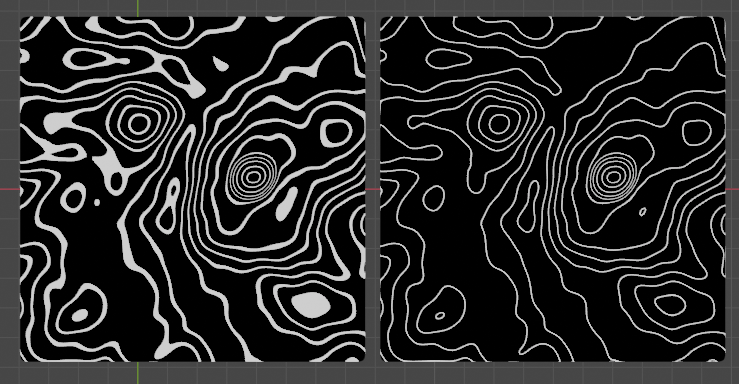 (above) a vertical orthogonal view.. (below) orthographic, from an angle.

(The black-and-white mask can be used to mix between any shaders, colors)

The "small issue" you're having is actually not that small. The way a shader works, is it calculates a pixel color independently from other pixels. Carlo calculates mathematically if a pixel is within given area (e.g. on a given height), but he doesn't have access to neighboring information. Ideally, you would prepare textures in a separate program, using algorithms that analyze the raster image in order to create paths between areas of the same colors, and then you would color these paths. It's not a trivial task either, and Blender nodes are much more limited, because you only have a single pass, where each pixel is calculated on its own. Well... Since you're using a height map texture, and you can transform the mapping to shift it (kind of like moving a piece of paper when it's being scanned), you actually can sample other pixels. Still, if you create a whole program, finding edges, in nodes, not only the node setup will be HUGE, but it will be run for each pixel instead of once. I'm saying all this to preemptively justify the complexity of following node setup (and the result isn't jaw-dropping): 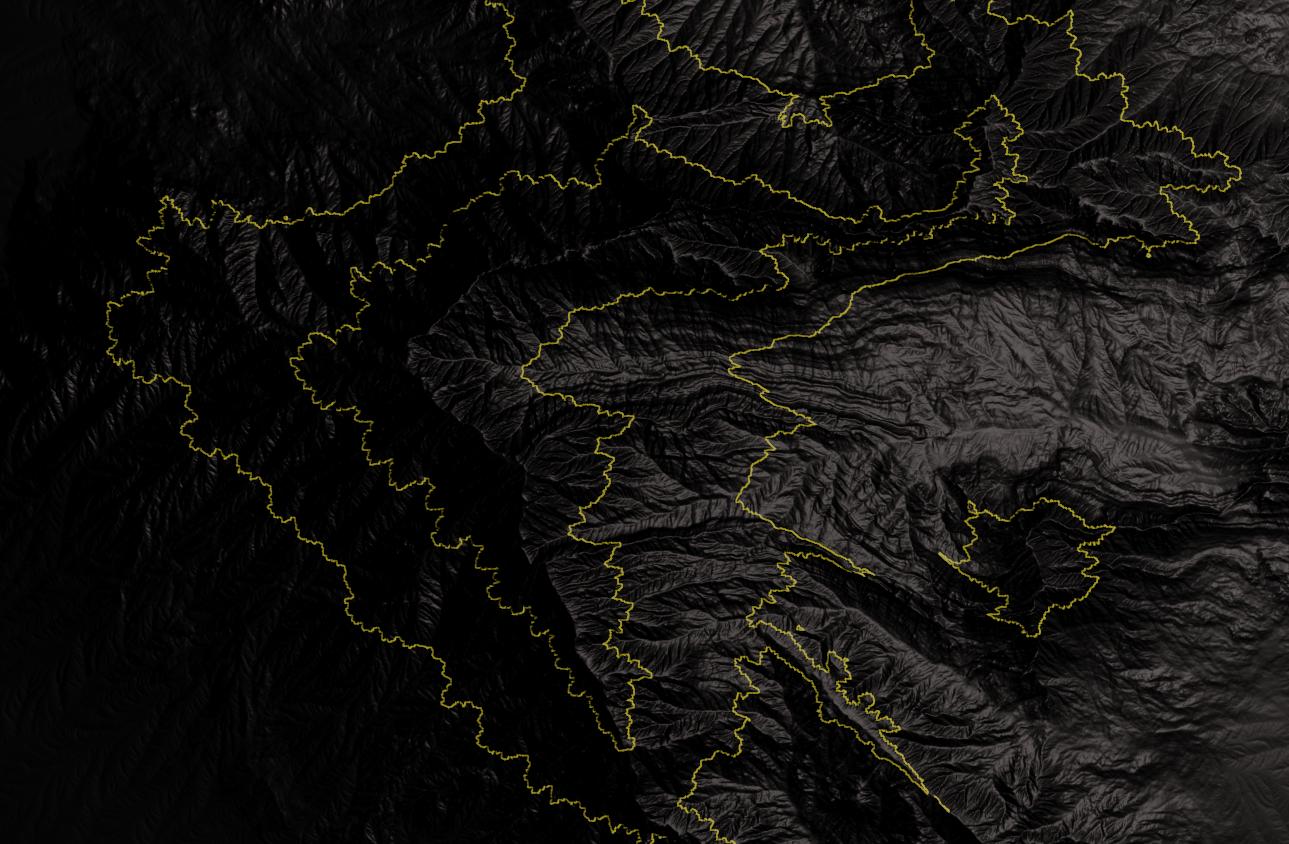 TLDR - how it works: instead of drawing (yellow) two borders directly, I prepare to draw one area inside two borders. Then I'm sampling 8 neighboring pixels if they're also in the area. If less than 8 pixels are - I'm on a border and only then I actually draw (that is, I actually change color from black to yellow).

Explanation of nodes from left to right:

So far an example path for a pixel:

Let's go out of the green node and continue:

And let's go to the green node and adjust MIN and MAX to get an interesting area:

I took the height map from here: 50 displacement map variations of gaea's hero mountain Link to the folder with the texture: Var_05

Not the answer you're looking for? Browse other questions tagged modeling rendering cycles-render-engine or ask your own question.

6
What exactly is the intuition and a logical way of thinking about how ColorRamp node works to 'distribute' its input?
2
How do I apply a wireframe modifier as an overlay without it replacing all the shading I've already done?
2
Render mesh with level curves

8
How can I use an image texture as a guide for weight painting?
0
Difficulty with multiple overlaying textures on one material
11
Translucent plastic foam
0
High to Low poly normal map appears to have seams all over and looks warped
2
Wrapping a Pattern over an object