How can I make a hexagonal cone?

The result that i need

I've been struggling for this one, I need to make a cone, but the cone is made of little hexagon or honeycomb if you prefer, to give you a much better idea, look at the pyramid of giza the general forme or shape is a pyramid but in reality it's made of cube and cuboid, the same should be applied to the cone beeing the general form but made out of hexagone shapes.

I started with making a hexagon I gave it array then I made a curve circle (Add-Curve-Circle) then select hexagon (Add modifier-Deform-Curve) then set curve object to deform with Circle.

Sscale it to complete the circle then select it add another Add modifier-Generate- Array to make more of the hexagonal circle but vertical.

All good until I rotate it to make a cone 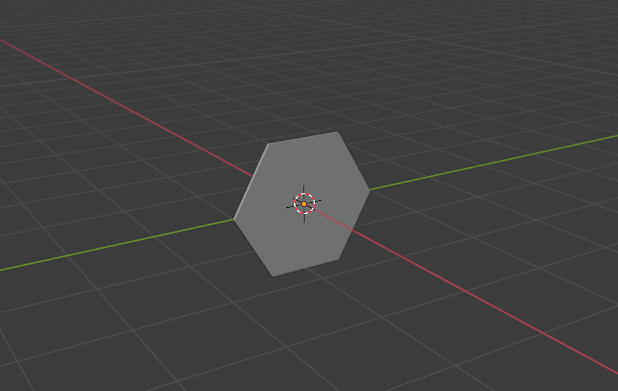 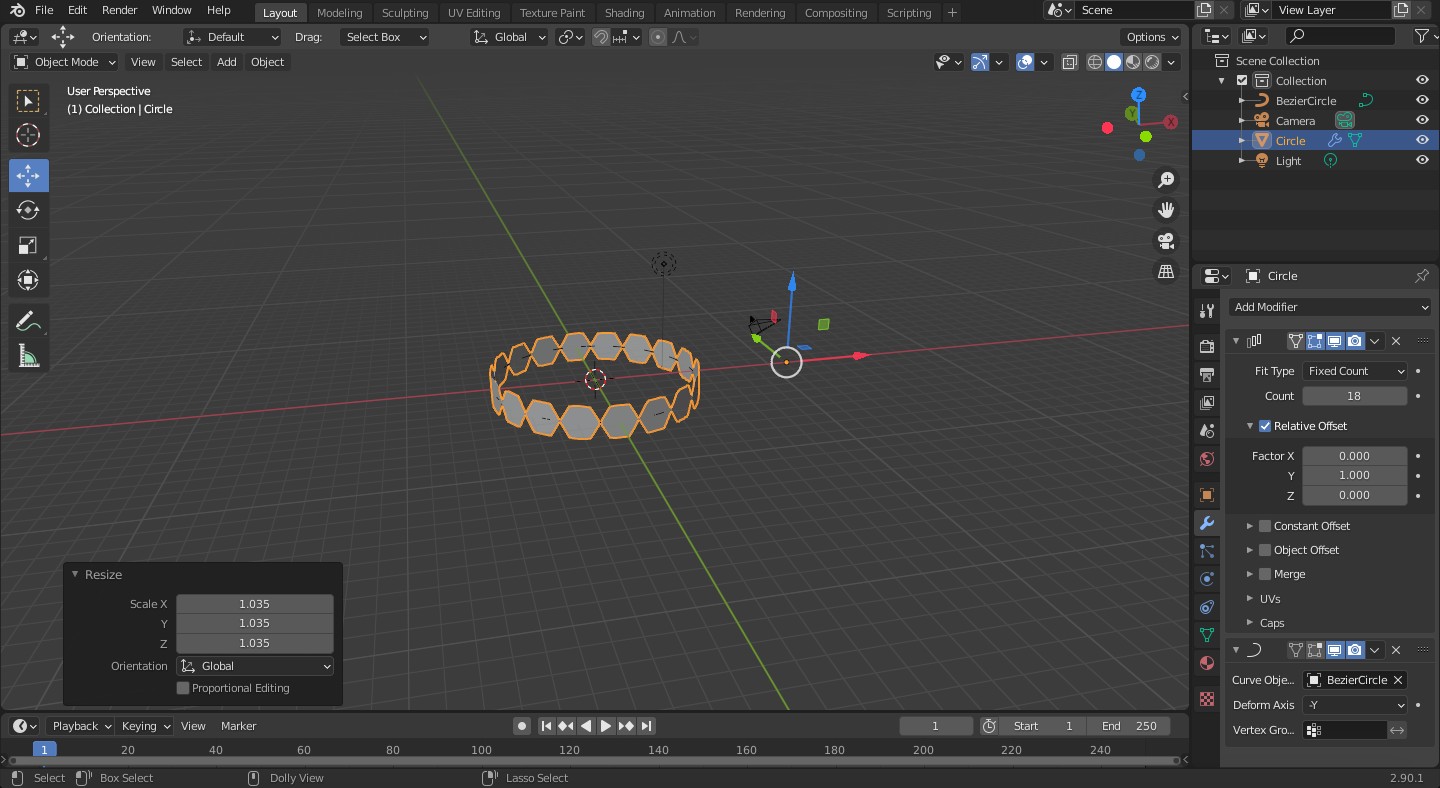 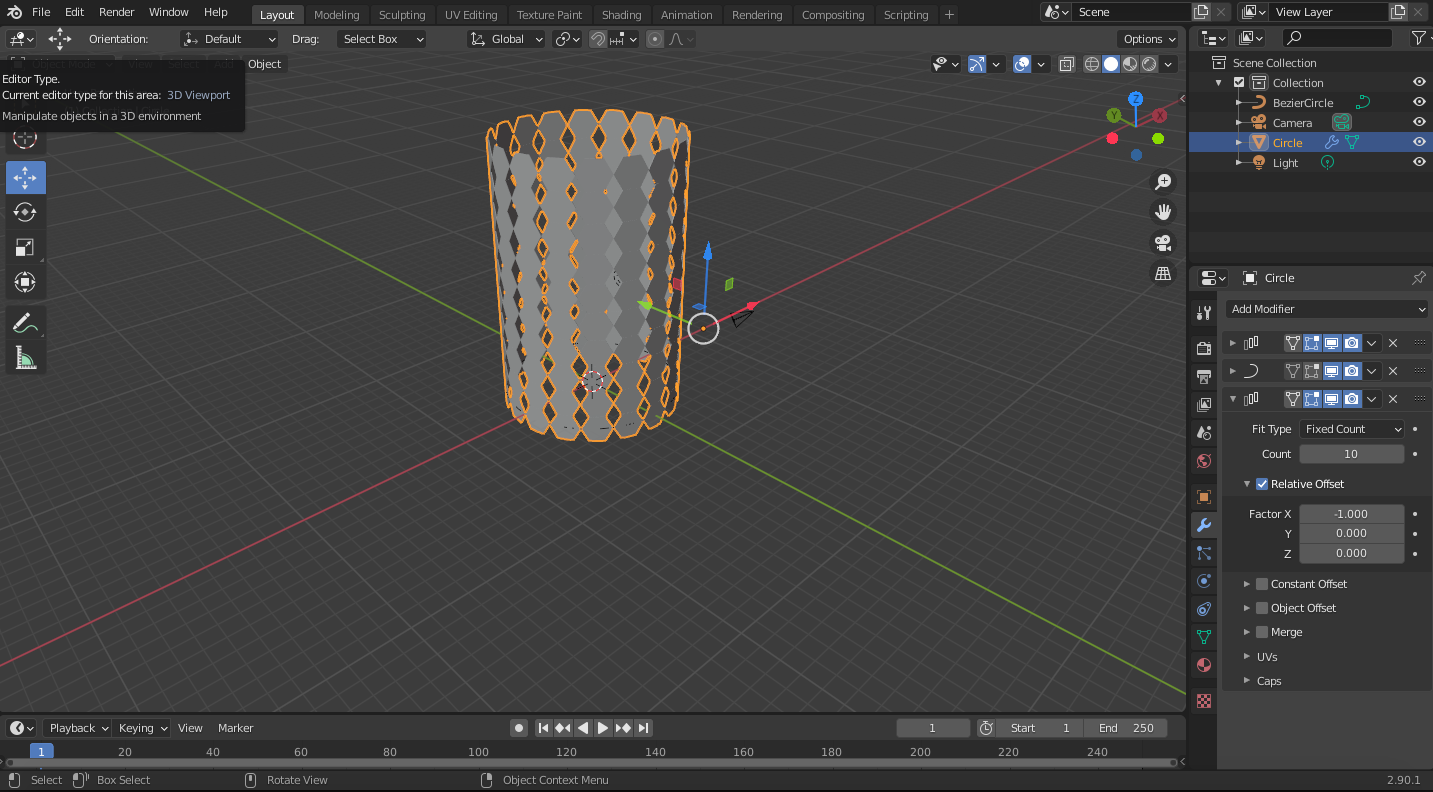 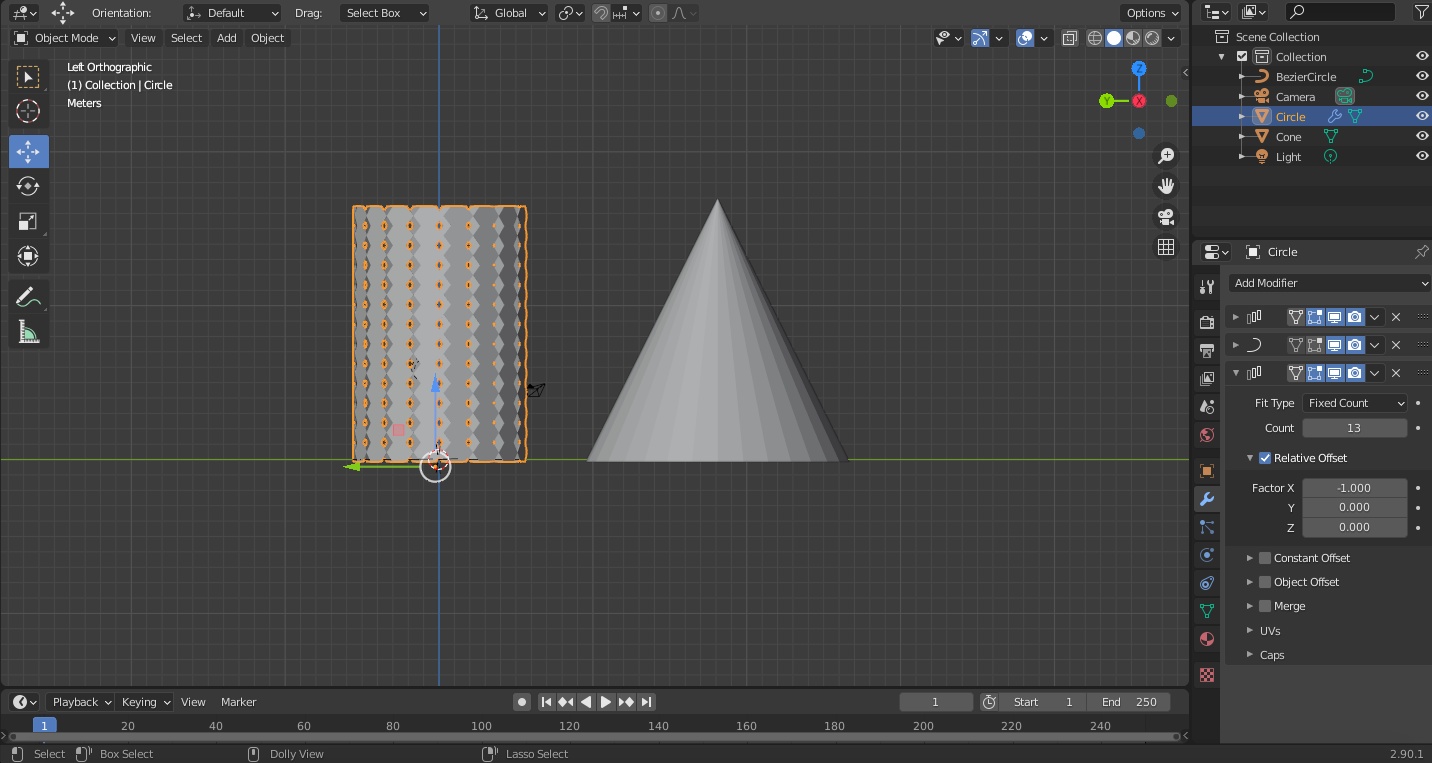 then make copies if your object mesh (make sure your base object is in center, actually it doesn't matter that much) 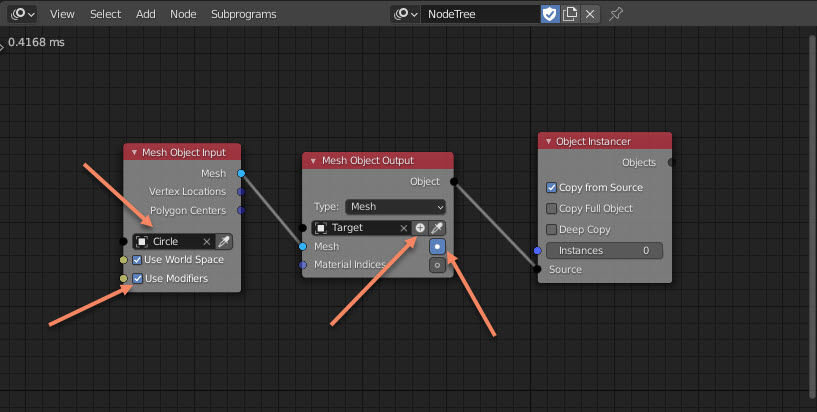 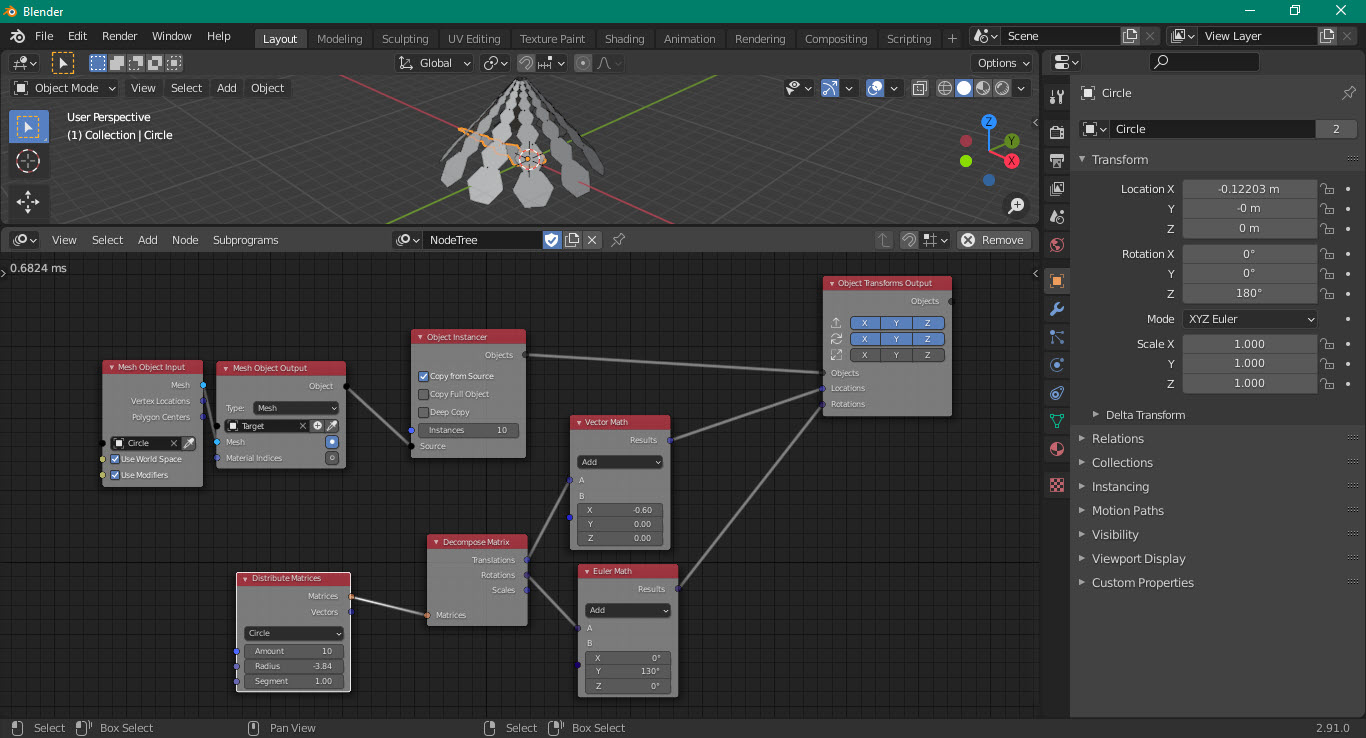 Note that instance count and amount in disterbute node is same, also I had to rotate base object along Z , just adjust stuff(nodes values and empty scale and location) to get good result and hide base object. also make sure when rotating base you rotate its empty as well
if something went wrong try reconnecting nodes (animation nodes dont like ctrl+z)

here is my result with this 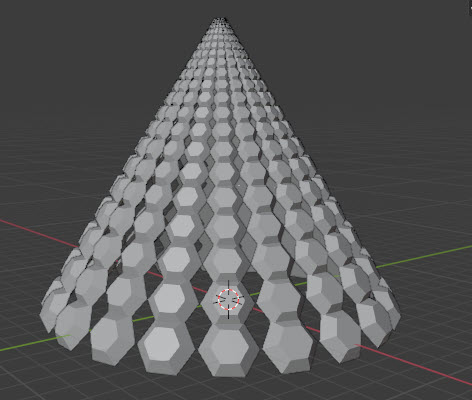 Using the same strategy as you can find here, you can:

First, create your hexagonal grid in the flat. That's 2 Array modifiers and a Weld modifier on a 6-sided circle at World 0.

Apply the modifiers, you now have your grid. 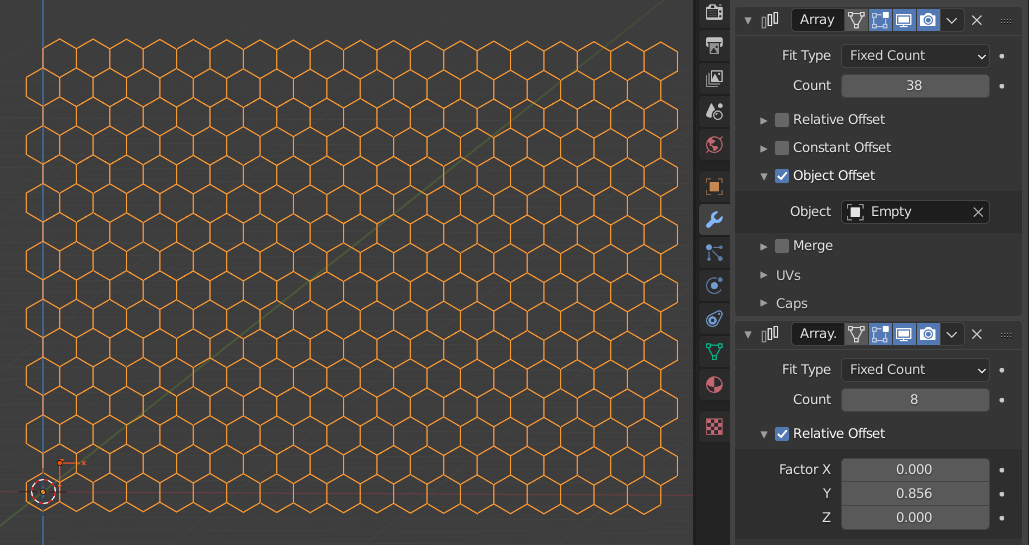 I worked with the grid in the XZ plane.. now, with the grid's origin at the center of its bottom edge, you can give it a Simple Deform modifier, Bend, by 360+ in Z. 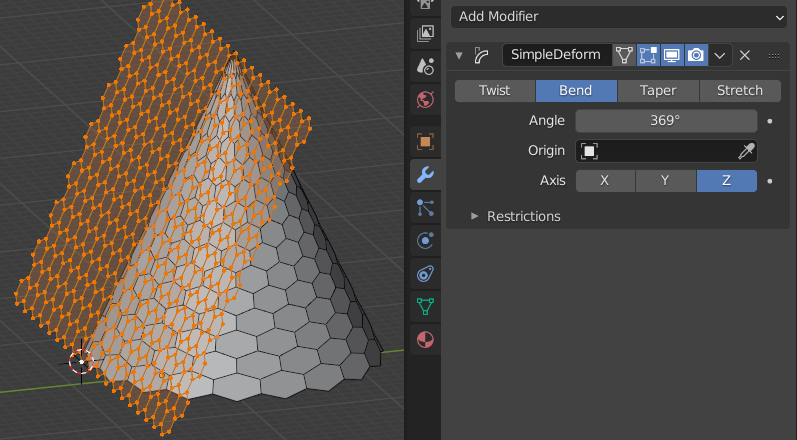 As, in Edit Mode, you move the grid mesh away from its object origin in Y, you will get a cylinder of growing circumference.

As you rotate the grid about its bottom edge, it becomes a cone. 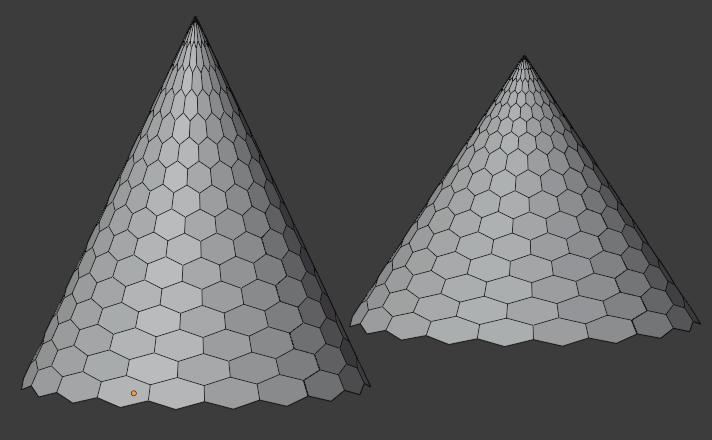 You can play with linear proportional scaling of the cone in Z to go some way to equalising the shape of the hexes on the surface.

If I understand your goal correctly, then I guess you could use instances on the faces of a cone remeshed with quadriflow remesher. . By using the edge length option set to somewhere around .03, you can get a topology that should work reasonably well.

Parent the hexagon to the cone with ⌃ Ctrl + P, and hide the instancer (cone). Then S scale the hexagon as you like.

Use the Tissue Addon.

Add a circle object with only 6 edges, to create the hexagon. 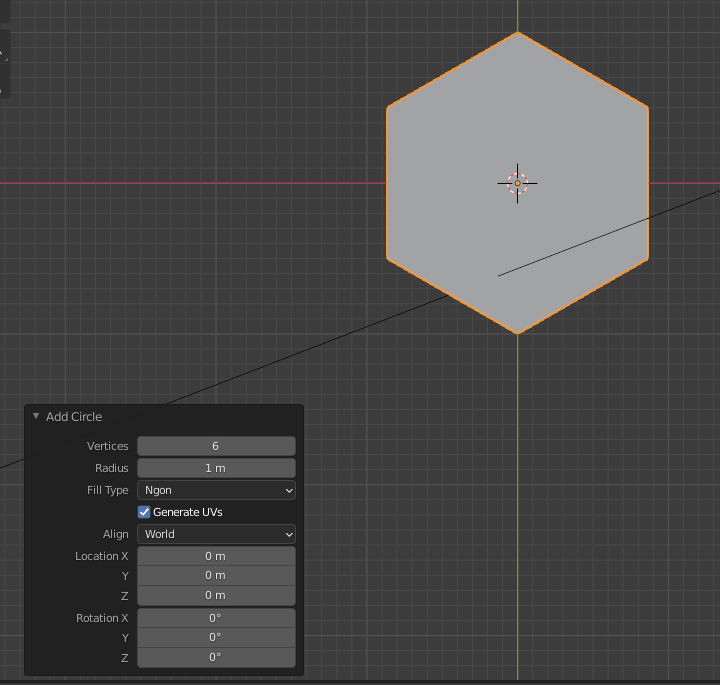 In object mode, add a cylinder that has no faces at the top. It is important that this is a different object. 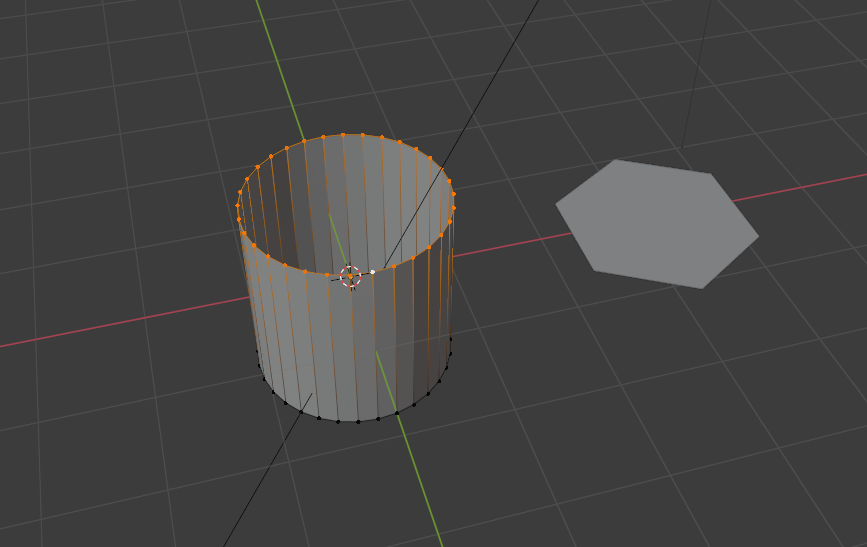 So that all of the top vertices meet at the center, creating a cone made out of quads (and not triangles, like the default cone primitive). 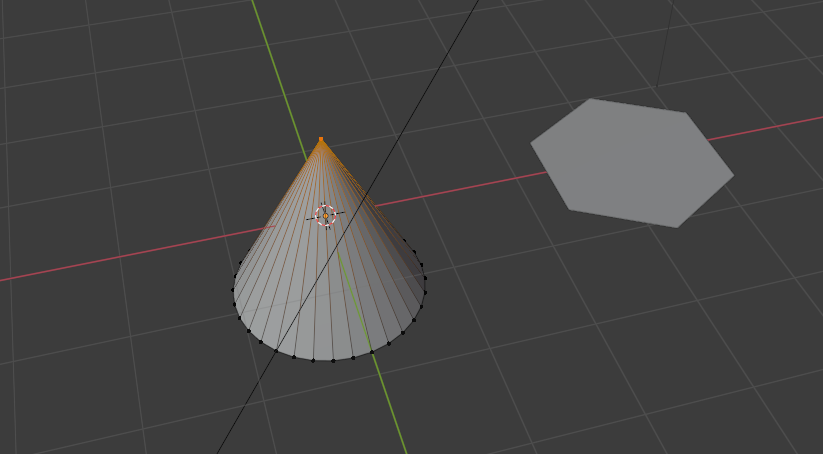 Add a few loop cuts (that is why you need quads on the mesh, you can't do this with triangles). 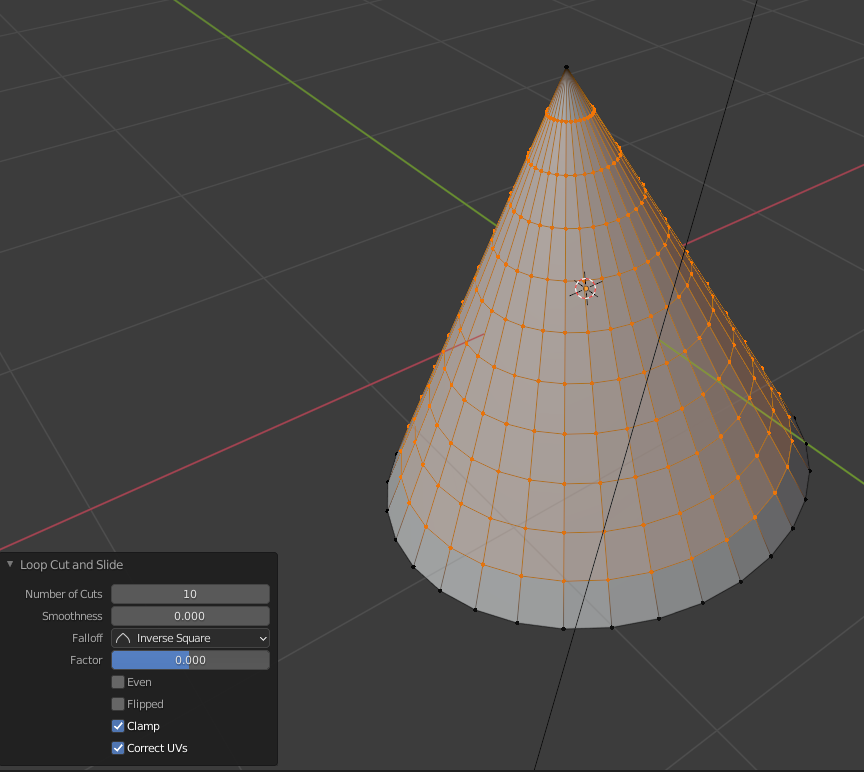 Give the Hexagon some thickness, by extruding the faces. 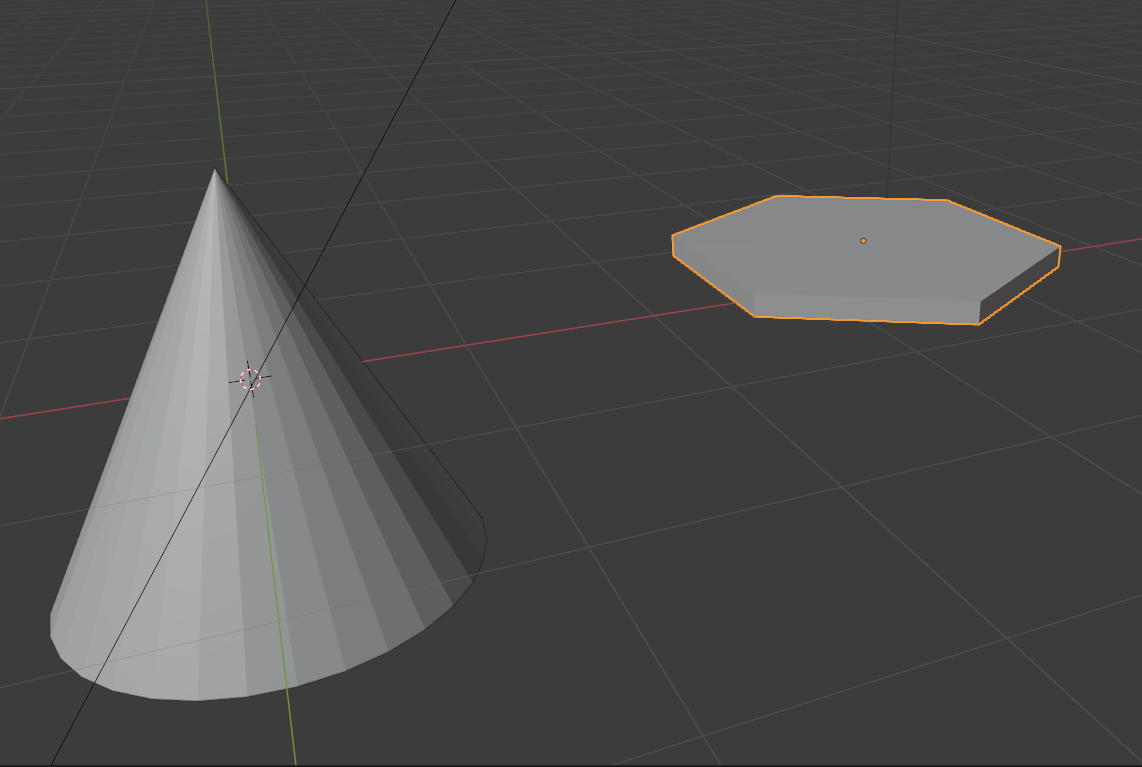 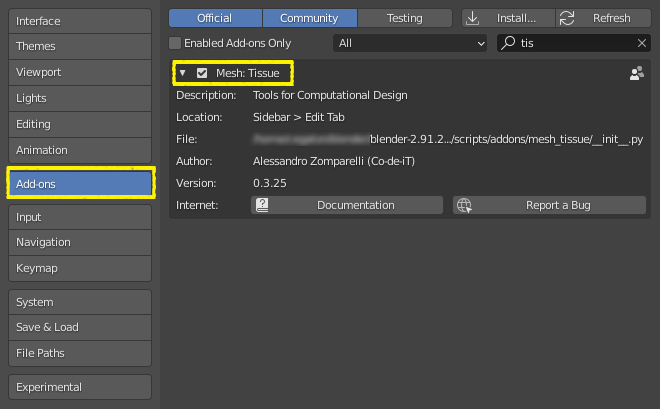 Press N to open the properties region, if it isn't open already, and in the Edit tab you will find the controls for the tissue addon.

Select the Hexagon and then ⇧ Shift Select the Cone, and press Tesselate. 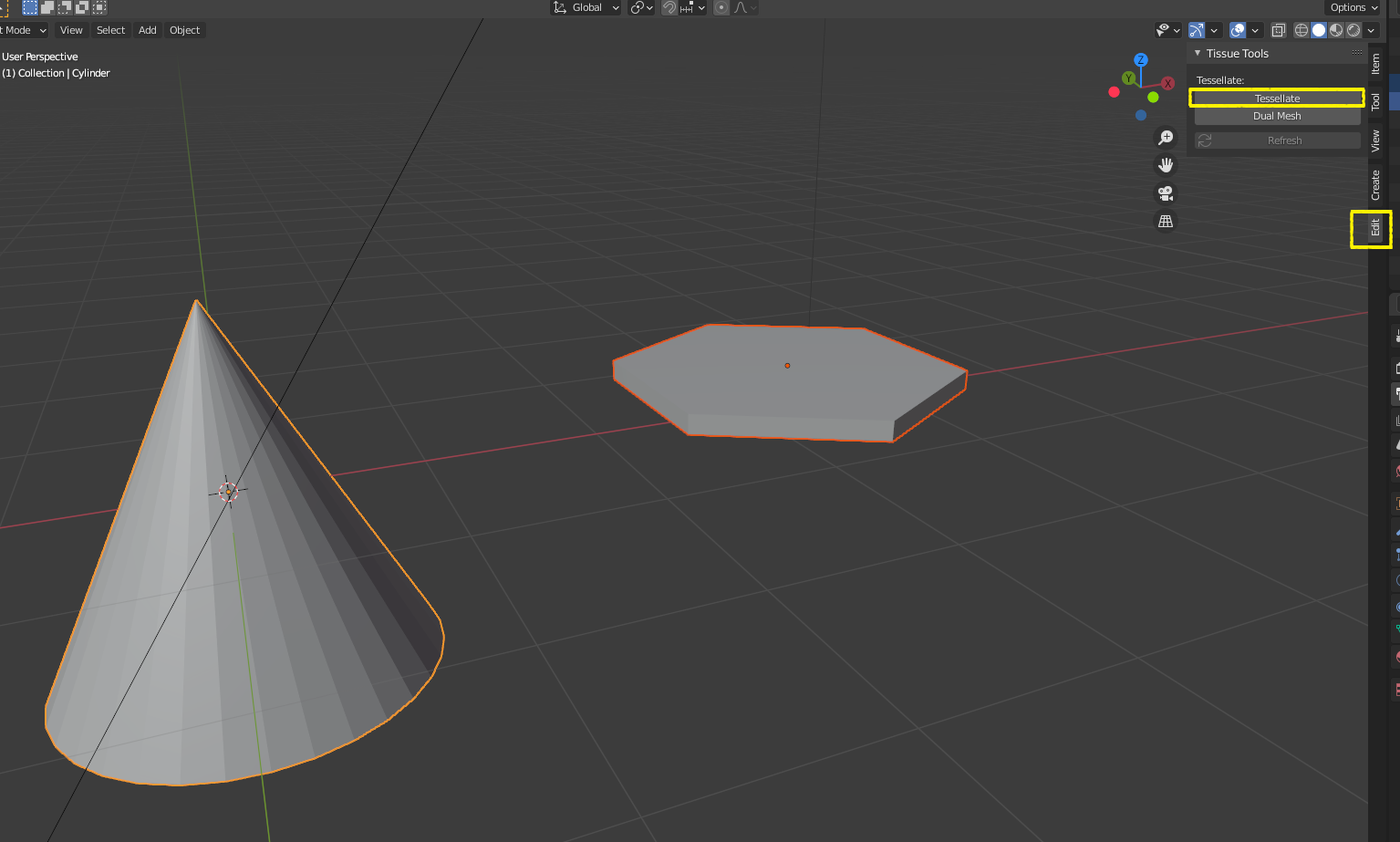 A new window pops up: 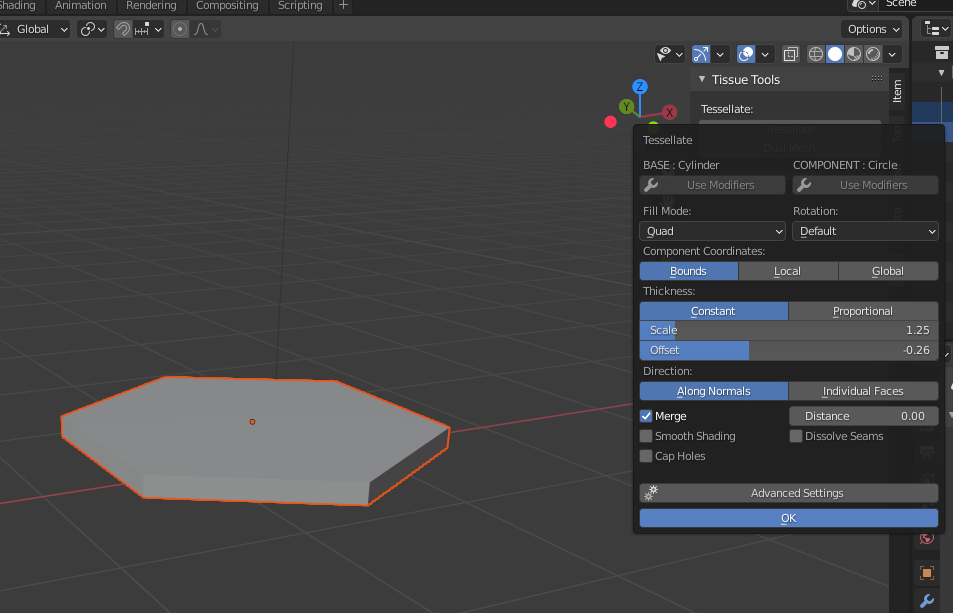 A new object called Tesselation will apear on top of the cone. 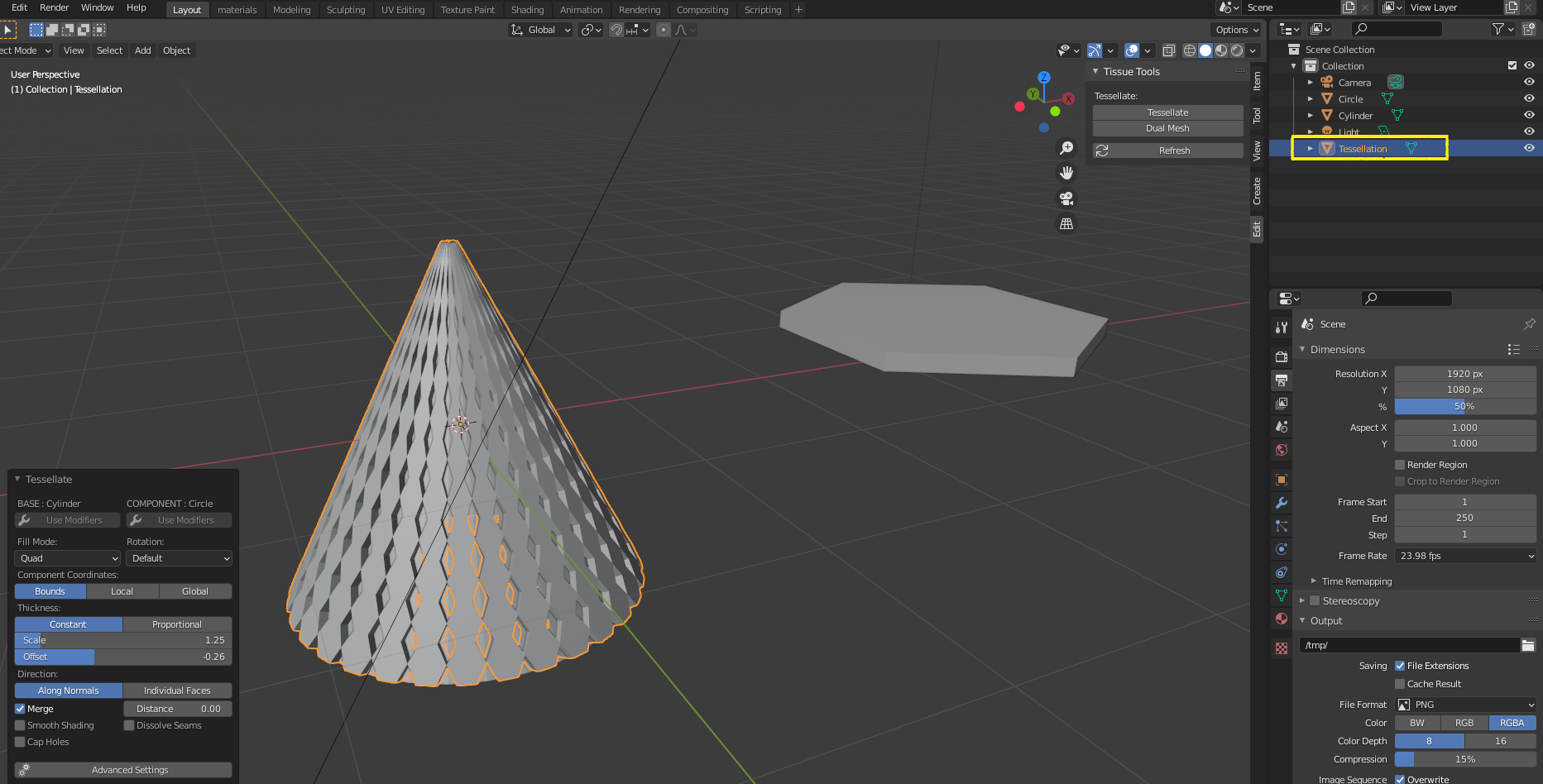 If you hide the cone you will see the object clearly. 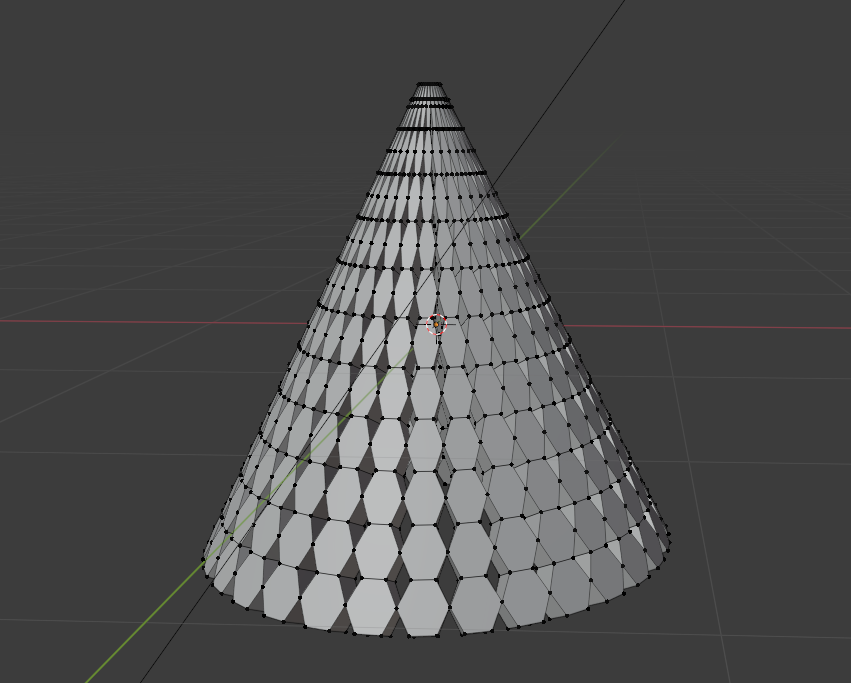 From then on you can play with the settings of the addon to get different tesselation objects: 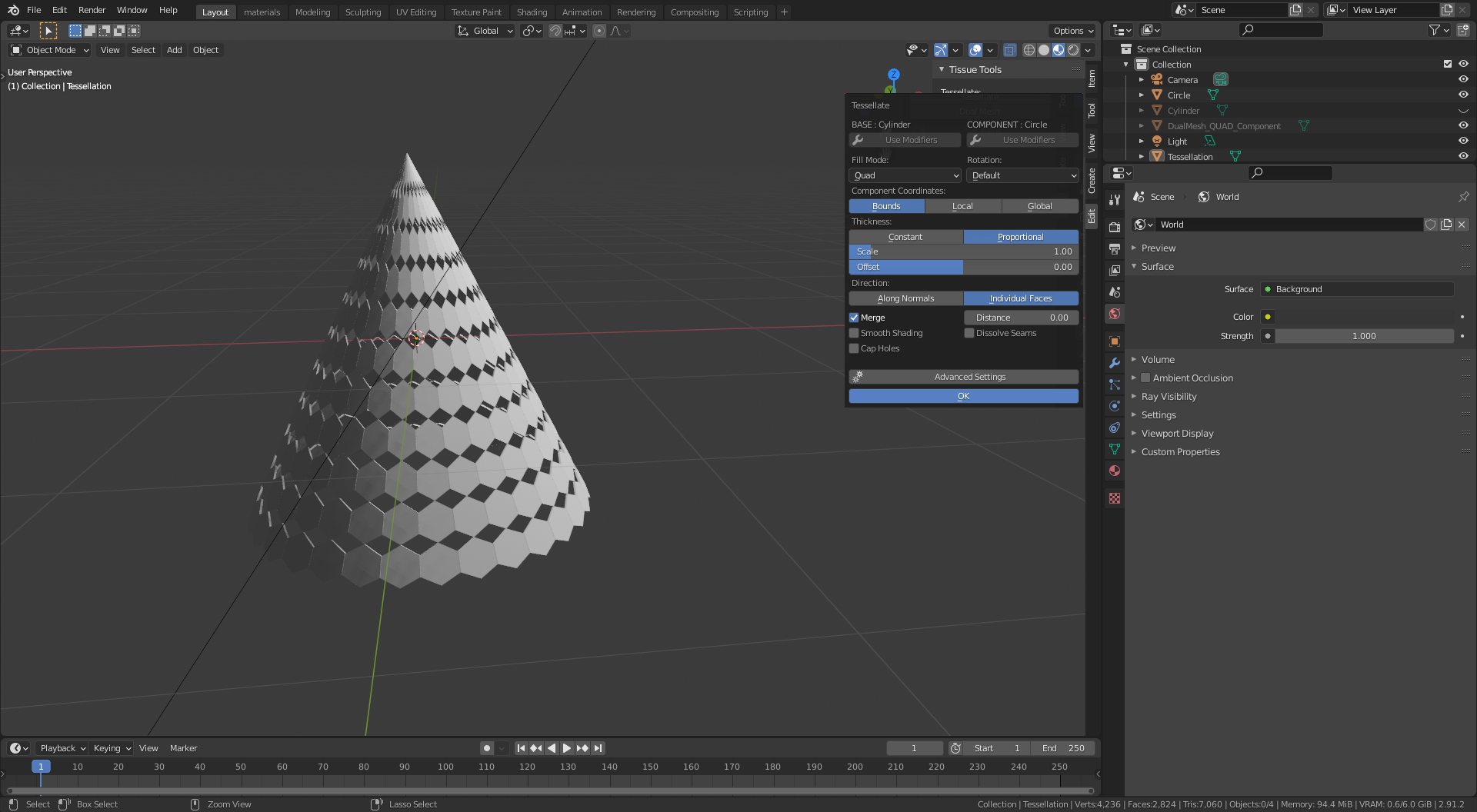 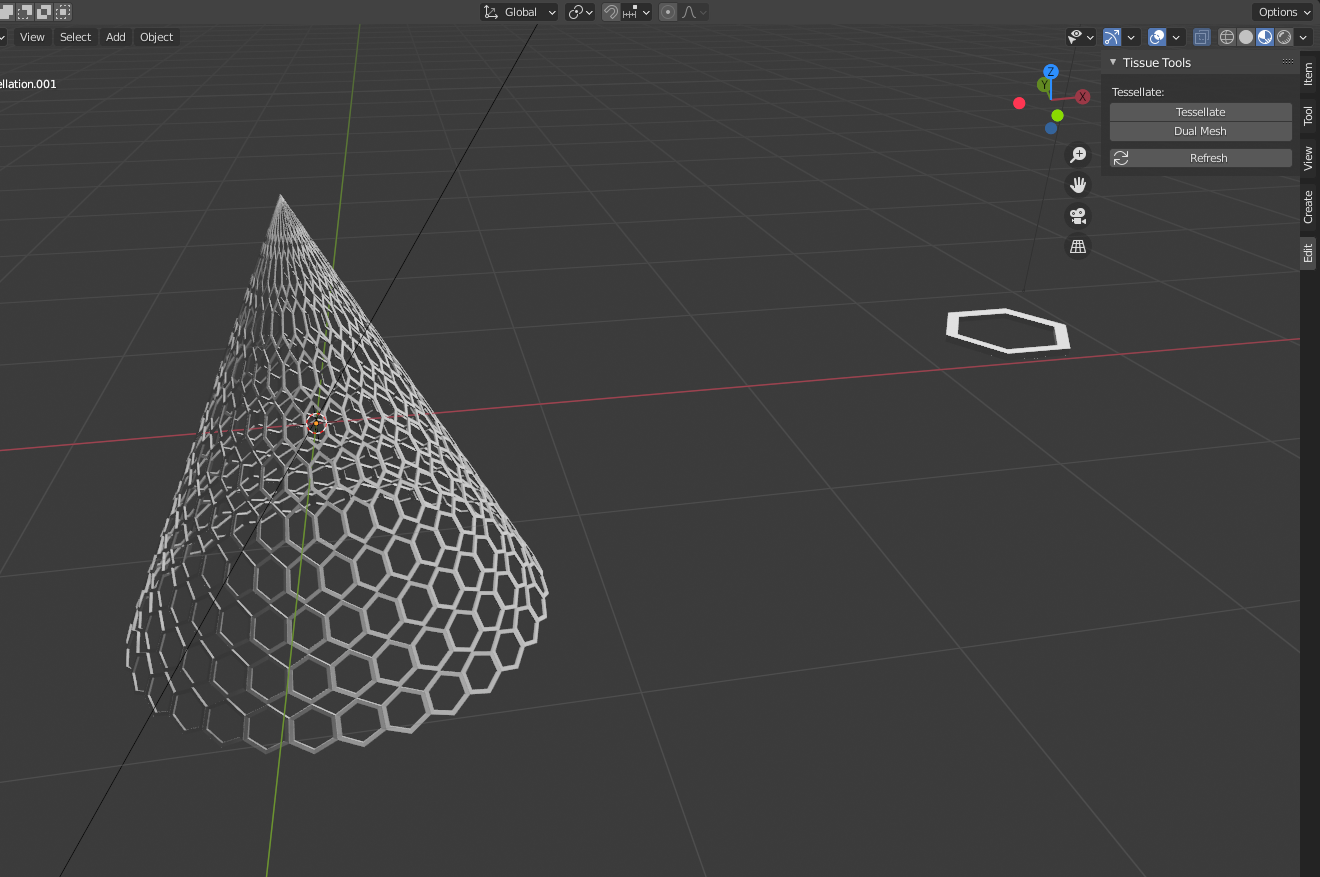 Not the answer you're looking for? Browse other questions tagged modeling mesh modifiers objects or ask your own question.

1
Animating a plane into a conical shape

18
How can I create a hollow sphere with regularly spaced holes?
2
Why are circles always created upside down?
2
Multiple array modifiers and object offset rotation
0
Simple deform modifier to sphere shape
0
Array not matching the bottom part
2
How to Snap to a curved object