Why does my M1 MacBook Pro render scenes differently than my 2016 MacBook Pro?

As the title suggests I'm experiencing an issue where Blender renders frames in Eevee differently from one machine to another. I have two laptops, a 2016 MacBook Pro that I generally use to create projects, and a new M1 MacBook Pro that I'd like to use as a rendering machine when I'm not using it for other things.

The 2016 has 16GB of RAM and an AMD Radeon Pro 460, running Blender 2.90.1 on macOS Mojave (10.14.6). The M1 has 16GB of RAM and an integrated GPU, and is also running Blender 2.90.1, but on macOS Big Sur (11.1). I ported across all of my user settings (preferences, hotkeys, addons, and so on) so the Blender environment is completely identical on both machines, and the folder structure that I store all of my projects and textures in is automatically replicated from one machine to another using SyncThing, so the relative and absolute file paths for things like PBR textures are always exactly the same regardless of which machine I'm using.

However, even though both machines are as identical as I can make them, the M1 doesn't appear to render materials in the same way as the 2016 does. Things like translucency, roughness, screen space reflections, and so on are subtly different, sometimes wildly different. Here's an image that illustrates the problem: 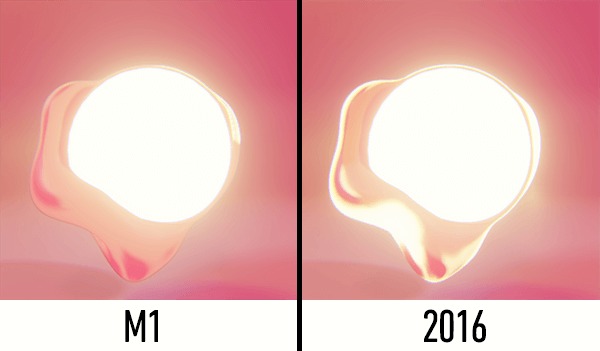 As you can see, the blobby mesh surrounding the emissive sphere is substantially different when rendered on the M1 as compared to the 2016. The material itself is just a Principled BSDF with all values at default except Transmission which is set to 1 and Emission which is set to a bright red shade. In the material settings I've changed Blend Mode to Alpha Blend, Shadow Mode to Opaque, Show Backface is unchecked, Screen Space Reflections is checked, and the Refraction Depth is set to 0. All other material settings are at default. Here's a screenshot.

In the scene settings I've set the render engine to Eevee with 64 samples, enabled Screen Space Reflections, checked the Refraction box, set Trace Precision to 1, Max Roughness to 0.5, Thickness to 0.2, Edge Fading to 0.075, and Clamp to 10. Here's a screenshot.

So, with all of that said, am I ultimately just experiencing the limitations of the M1's integrated GPU and macOS in general? I vaguely recall reading somewhere that Big Sur doesn't properly support OpenGL and there may be problems with Blender as a result, so is that what's causing my issue here? If so, is there some way around it or do I just need to wait until Blender supports Metal? And if not, what else might the issue be?

Thanks very much for your help!

Browse other questions tagged materials eevee-render-engine osx reflection or ask your own question.

1
Macbook trackpad very slow scrolling/panning (disable acceleration?)
0
Poor performance on mac with AMD Radeon Pro 560
1
Advice or workarounds to use Nvidia Drivers in Mac OS Mojave
0
Screen Space Reflection Flickering During Animation
0
Help! Transparency and refraction not showing up in viewport like tutorial
7
How do I get proper reflections (Eevee)?
6
Why does my bathroom mirror distort so much?