How can I store an animation action for later use?

By stashing the actions we are doing little more than using the NLA as a bag to hold them, and associate them with their object. If the object is linked or appended to another blend all the actions will come too. (Similarly with many export formats) Pushing them down adds a track and action strip contributing to the animation result. Stashed actions do not.

Example of Action Editor above NLA Editor, with 3 previously stashed actions, Hop, Throb and Spin. The new action "Walk" is in the slot, then stashed too.

You actually don't need to push your action down into the NLA in order to save it, you can press on the X (close) or New (duplicate) buttons to close your current action and to create a new one, the action you've closed will be saved and you'll be able to call it back later with the dropdown menu, as long as you don't close your file. But the best option is to click on the Fake User button (shield icon), it will save your action even if it's not used by any of your object/armature. An action that has no user (meaning an action that is not currently used by any object, that is not pushed down in the NLA or that has no fake user) will be automatically lost when you'll close your file:

Once you've clicked on Fake User you'll see that an F now appears in front of this action in the dropdown list, it's the garantee that your action will be available when you'll close and reopen your file. A 0, on the contrary, means that this action has no user and will be lost when you'll close the file: 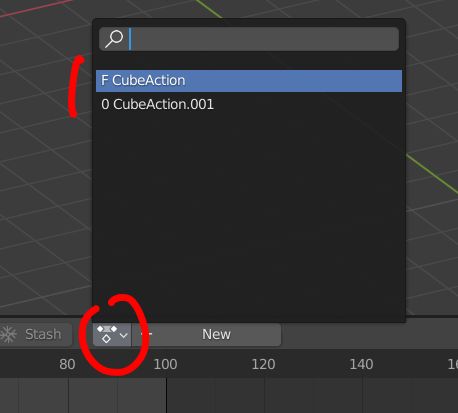 The Push Down and Stash buttons push down the selected action into the NLA, the NLA is an action sequencer that allows to combine your different actions later (open a new window then select Nonlinear Animation).

You can save this way, as Batfinger says it allows to easily link the action to the object. In that case, if you make any change, you don't need to push down again, the action in the NLA is automatically synchronized.

Not the answer you're looking for? Browse other questions tagged animation actions or ask your own question.

4
Store each animation frame as new object
1
How to save NLA action but don't use it?
3
How can I copy frames from one action to another action?
0
Save ik bones after bake action for backup
0
Make multiple smaller weapon animation clips out of big default action for use in Unity game engine
0
animation track with two stripes and second stripe strart where first stripe ends?
0
Blender 2.9 - how to delete animation action?
1
How can I edit an action strip while seeing the global NLA animation playing?