A couple weeks ago I got into animations and I find it really interesting. One thing I have not been able to figure out is how to make only specific parts of a block glow. Specifically, I am unable to make the ores in an ore block glow.

When I add an emission to the block or add a point light to the block and turn off shadows, the entire block lights up. The image below is pulled from the internet and it's what I am trying to go for. 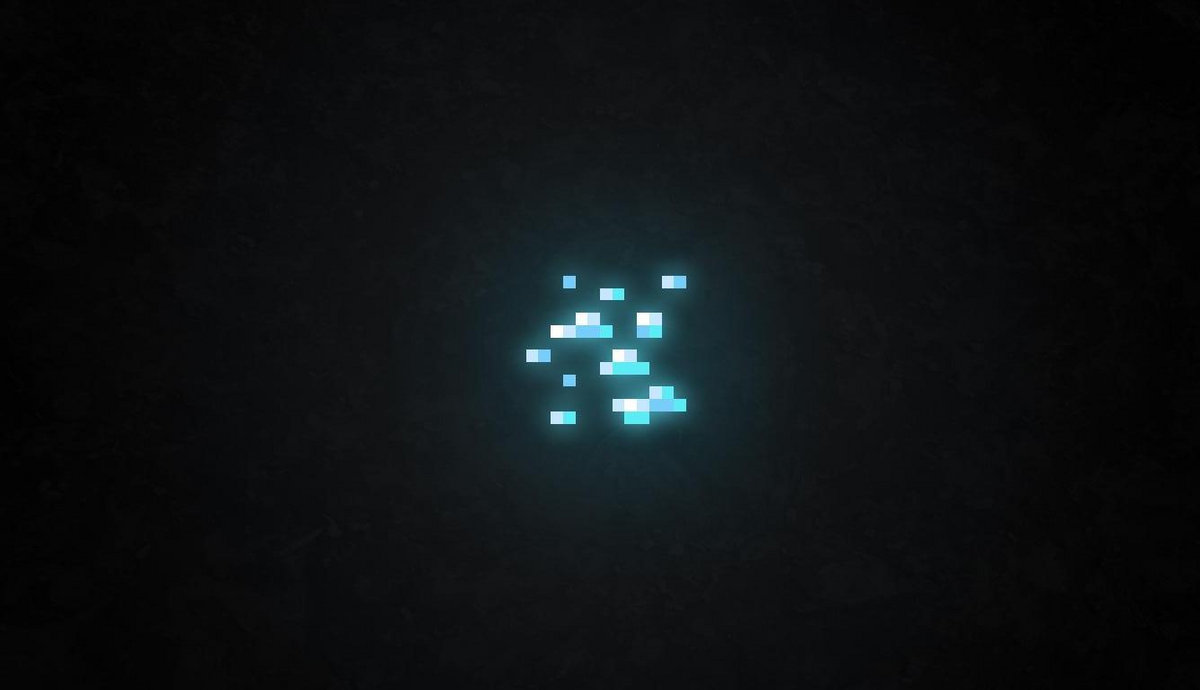 Edit: I wrote that quickly in late night, so today I added my Result and also fixed some information.

You can do this by making a mask, with which you can map an Emission Shader with a Principled BSDF Shader. Set up your UV system first, you need the image to be projected perfectly on one of the faces, I picked the front one.

Second, find an image texture of diamond ore- I used this one 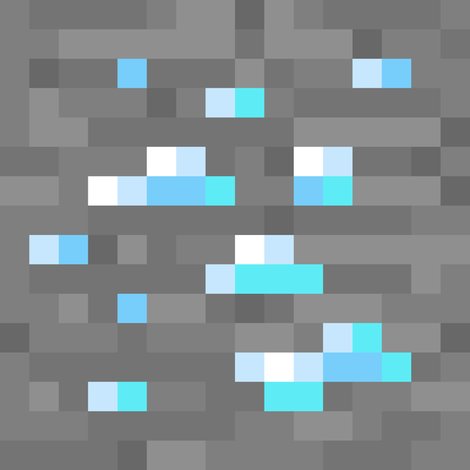 Then, in the Shader editor, we need to mask out the Ore from the stone. First, take the UV coordinates and put them through a mapping node. With it, set the Location. If you want it centered, then add -0.5 on X and Y axis. Then, use Vector Math, set to scale to control the Scale of the image. Then, plug in the image texture. After that, if you scale it, you will see that it will repeat. So, that's why you have to set the image from Repeat to Clip. Now, you will have those diamonds to scale up and down with the scale node.

Now, Math node, set to Maximum, to cut out the diamonds from the background stone. After this, feed it through Map Range node cut out the background completely. So, now you have a good mask. Then, use Emission Shader for the diamonds part, and Principled BSDF for the stone. Mix then with a Mix Shader node, with factor of our mask.

Now, if you plan on using EEVEE, you can check on Bloom in the render settings for that bloom effect. But, in Cycles, you need to go into the compositing and to add a Glare node, set to Fog Glow effect, in order to get that bloom. 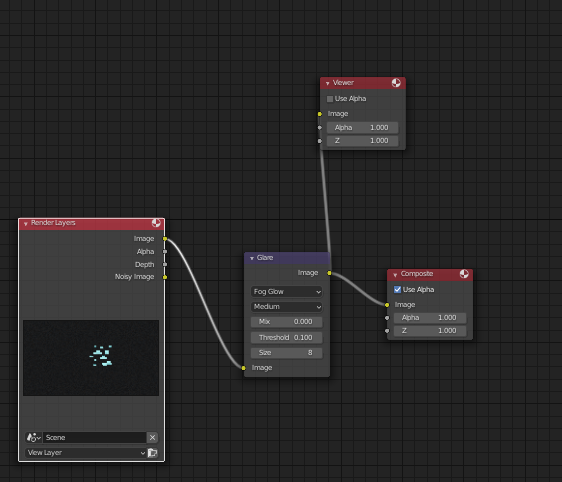 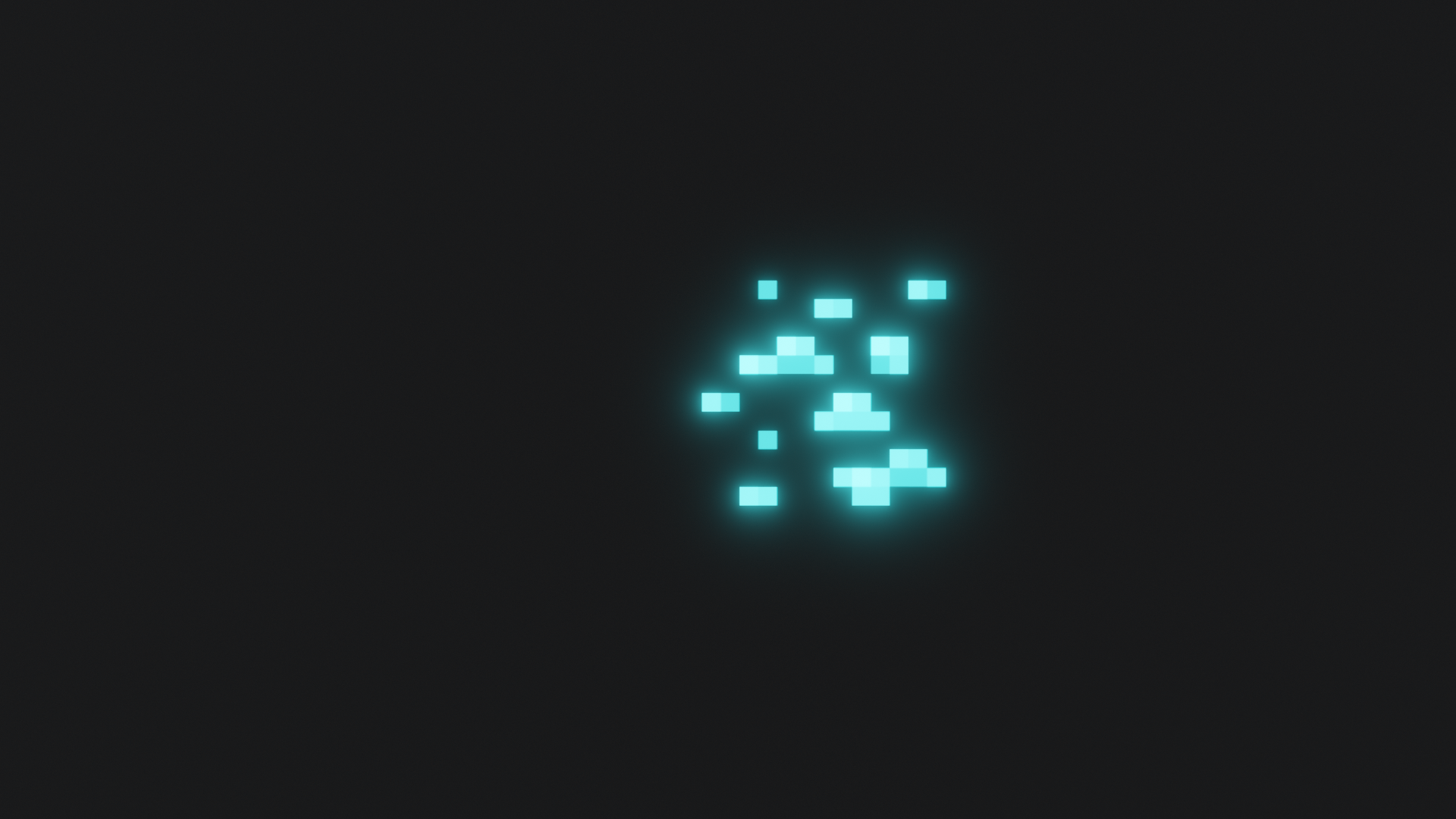 to get the glowing ore effect you can just use the default cube, press Tab to switch to edit mode and subdivide it a couple of times so you have more faces that you can apply different materials to. Select the faces that you want to be glowing. In the Material settings click the "+" button and click on new Material followed by "Assign" to assign this new material to the selected faces: 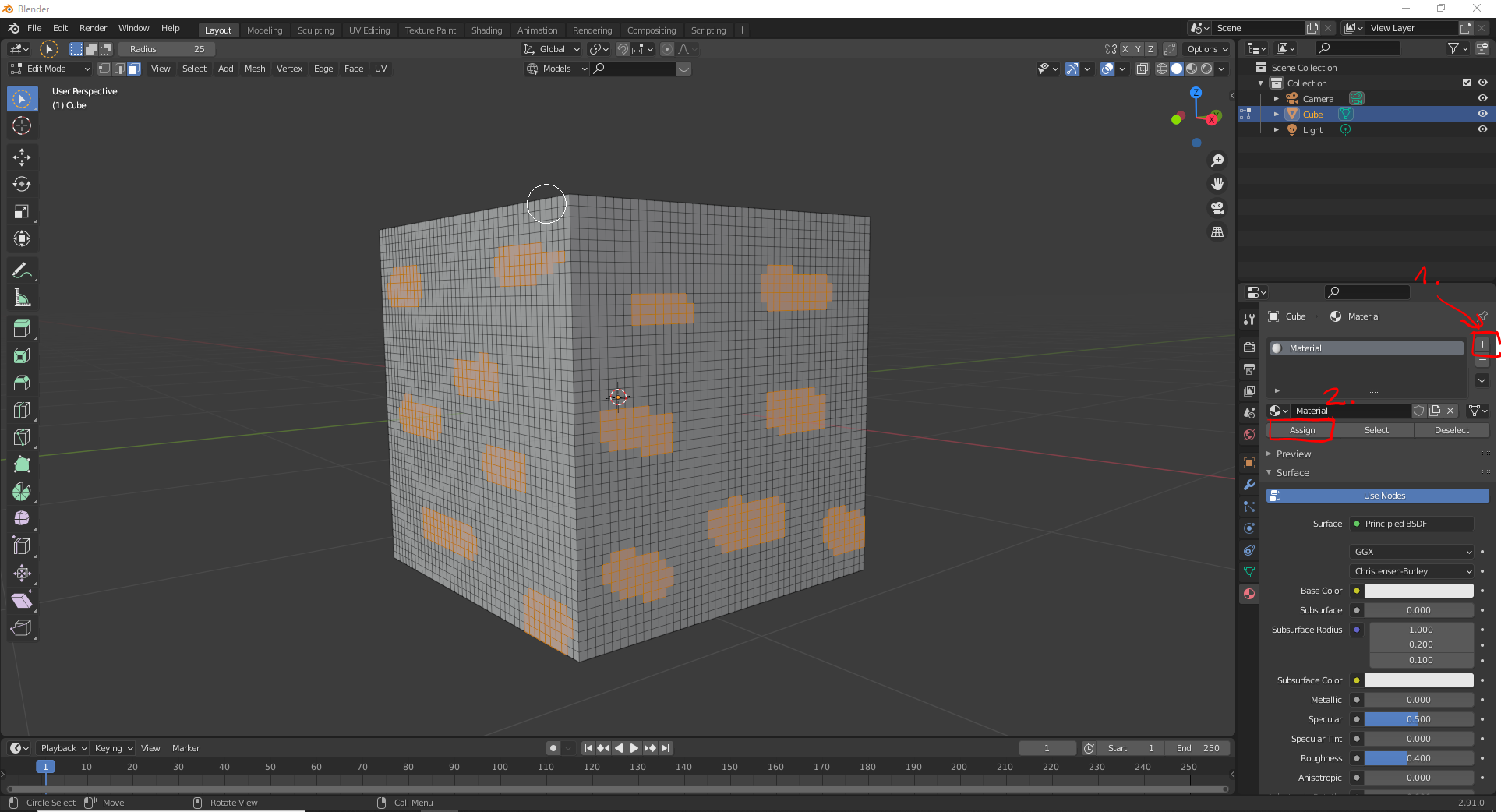 to get the glow effect switch from principled BSDF to Emission and choose the colour you want: 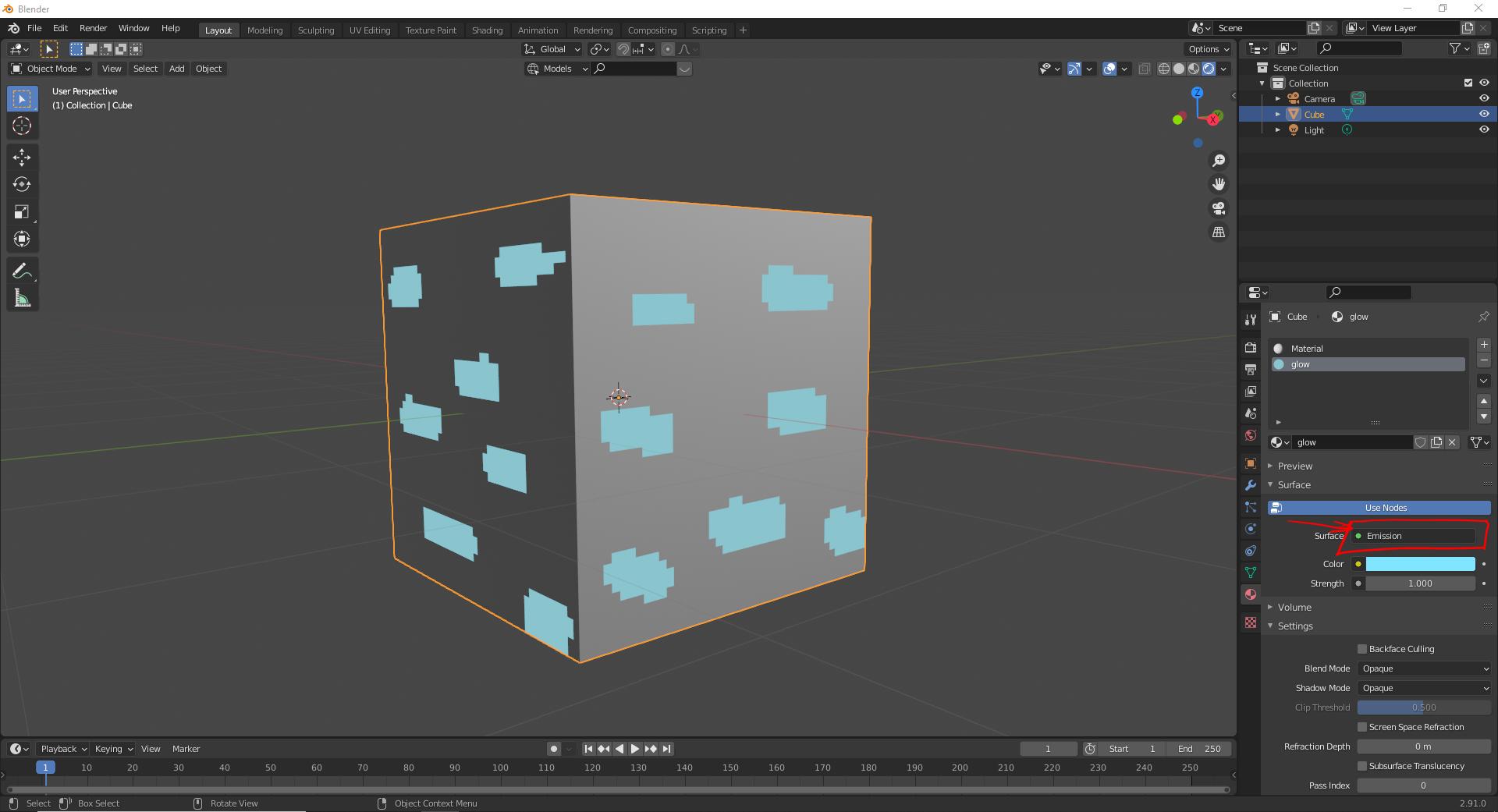 last step you have to do is go to the Render Properties and switch on "Bloom". Here you can play around with the Values to make the glowing effect stronger (Threshold, Intensity...). I also switched the environment color to black so the effect is better visible: 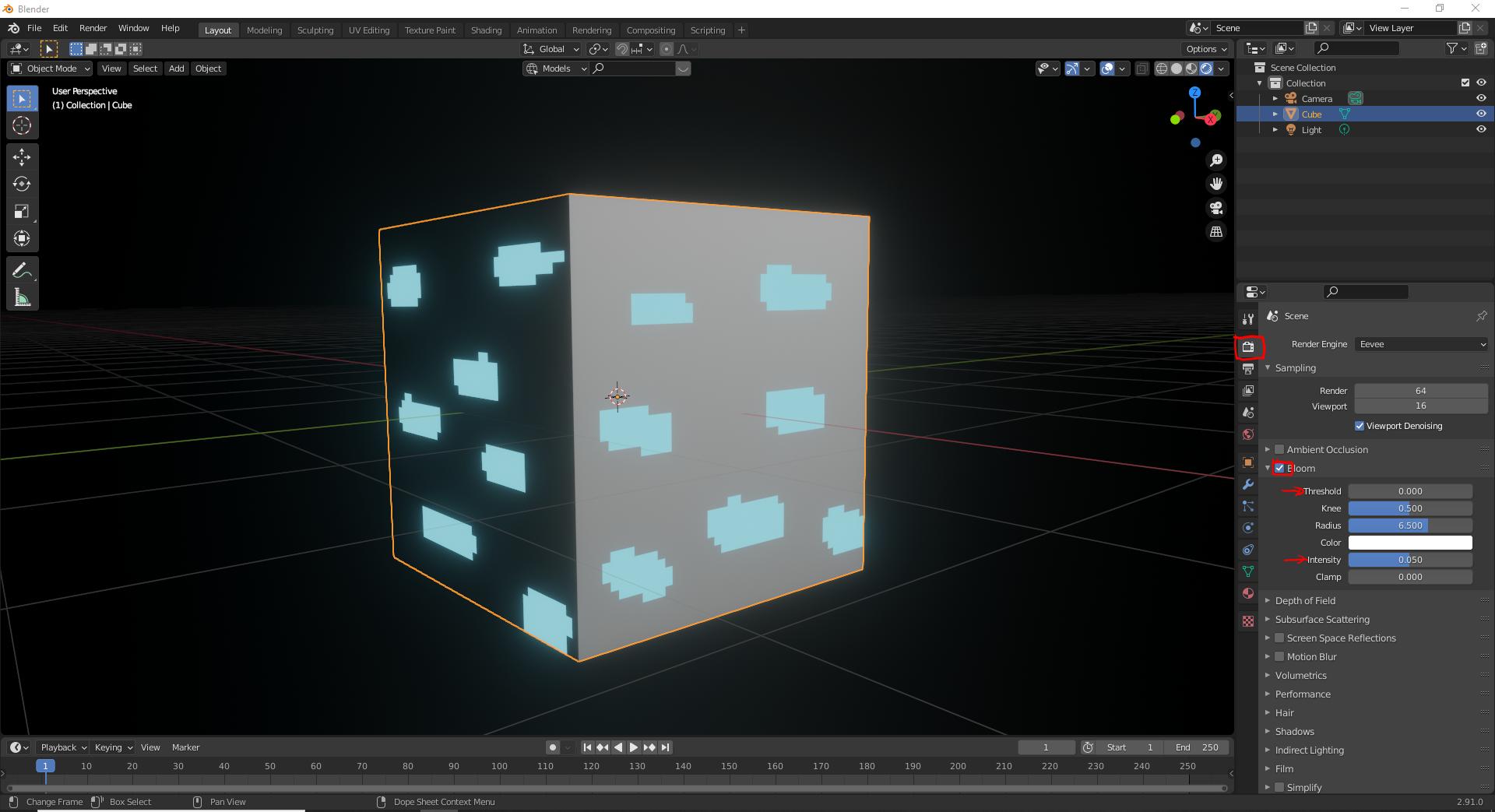 you can add as many different materials as you like!

Here's my contribution. Set up a voronoi texture to give as many divisions as you'd like: 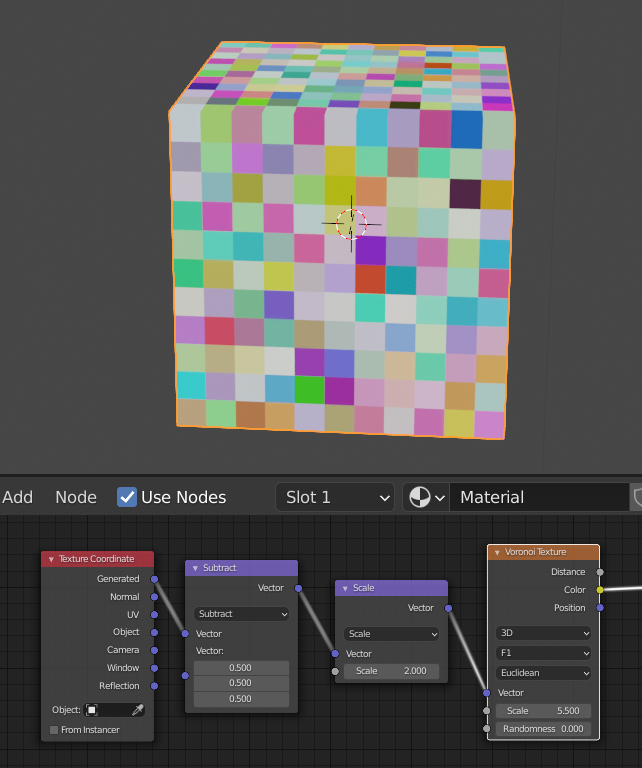 Then create a Color Ramp from your desired blue to white. 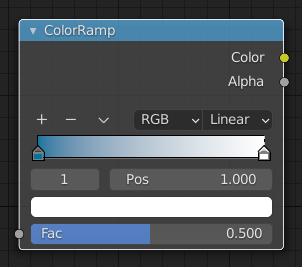 Select the white handle and hit the plus button a few times, then set it to constant. 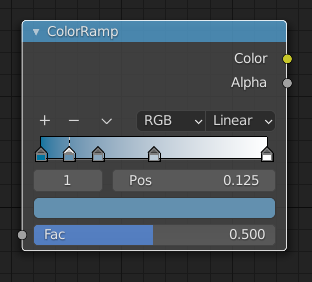 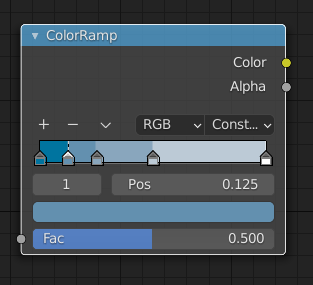 You can move these handles over to the right and then add one more handle that is pure black on the left.

You can plug this straight into Emission color on the principled shader. I used a strength of 3 here. 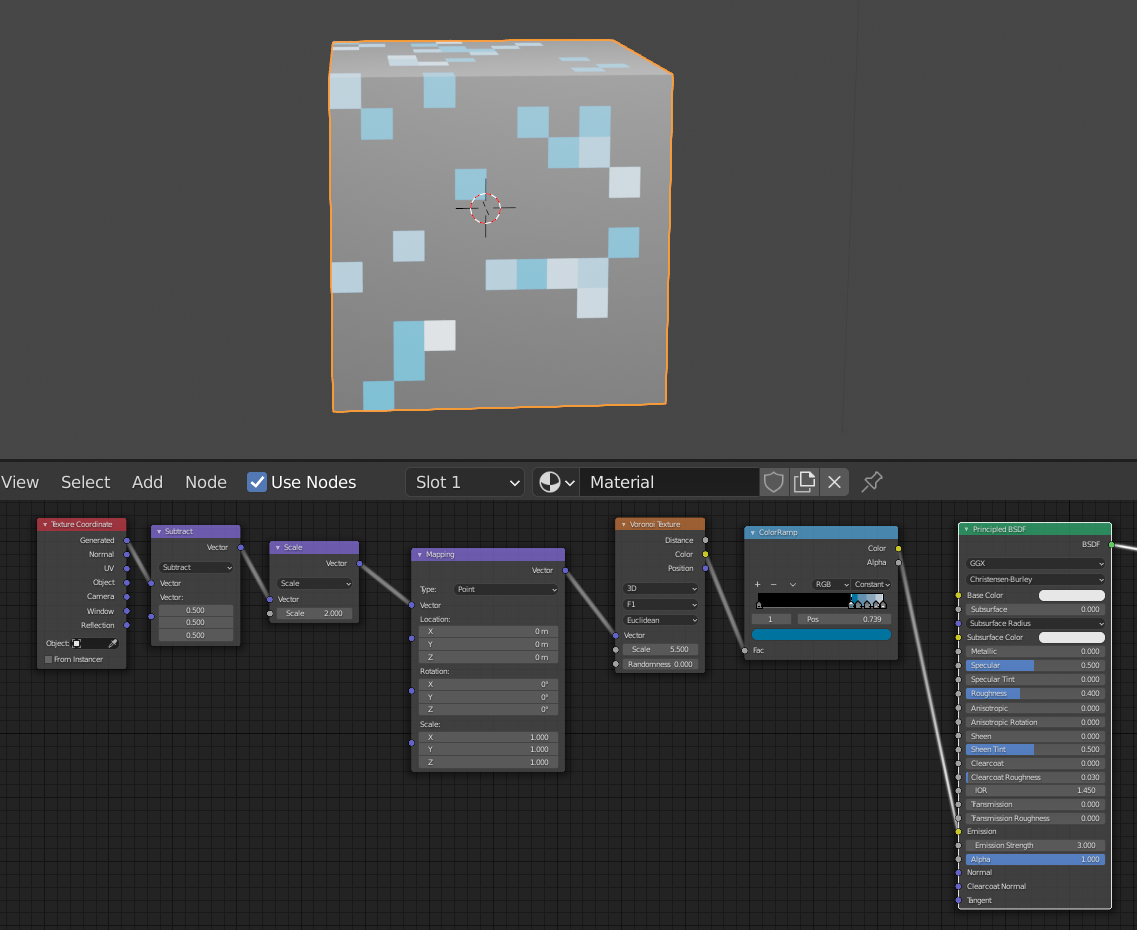 Depending on the block it may not look good to just have the emission coming through the surface, so you can instead use it as a mix factor with a little math. 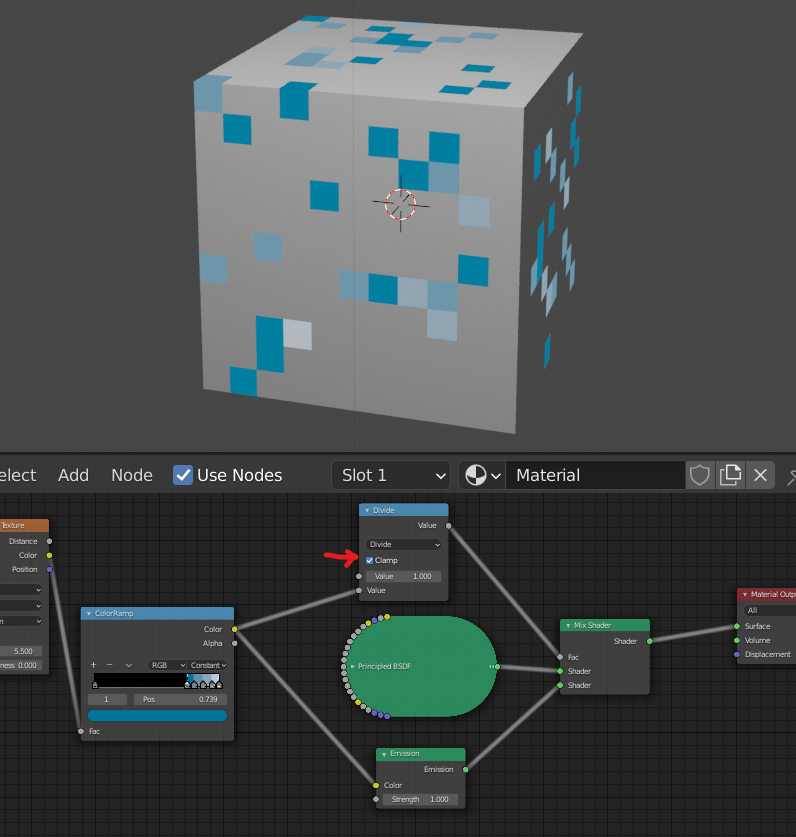 Bonus: Procedurally, you can randomize the coordinates to get a different block each time. 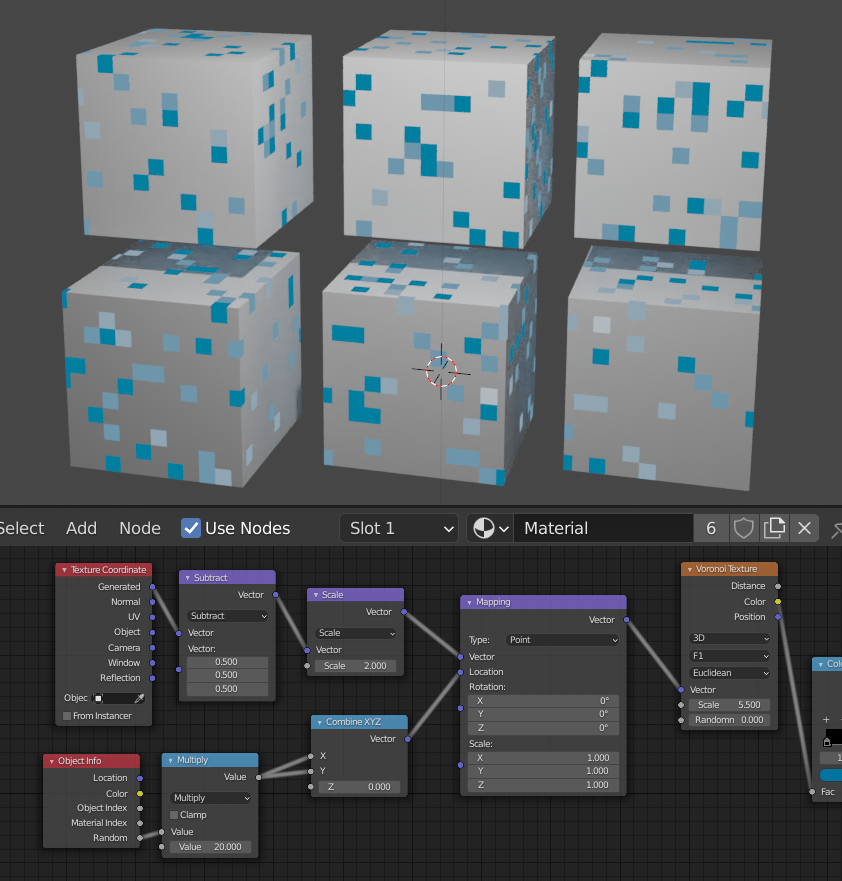 Not the answer you're looking for? Browse other questions tagged node-editor lighting compositing-nodes or ask your own question.