How to properly apply PBR displacement on non rectangular Planes?

I modeled a floor for a room in a building by using a Plane, therefore the floor geometry is not rectengular (due to corners etc.).

I added a pbr texture to the Plane object, unwrapped the uvs (by using "Project From View") and added the Subdivision Surface (using Simple mode) and Displace modifiers (as shown in Figure 3). The Displace modifier has a texture set which is linked to the displacement texture provided by the pbr package I used, the Coordinates are set to UV.

At first I tried to remove all unnecessary (inner) edges from the Plane (creating a NGon), but this resulted in an uneven subdivision as illustrated in this screenshot: 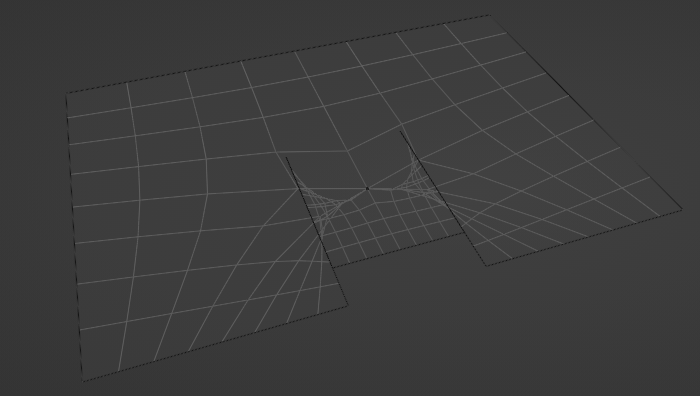 So I tried to divide the Plane into rectangles of the same size (using Loop Cut), but there is one rectangle which is smaller than the others (due to the shape of the Plane). The subdivision now works, for the most part, the way I had it in mind but there is still the problem that the divsion of the smaller rectangle results in a much finer structure than the divsion of the other (large) rectangles (obviously). 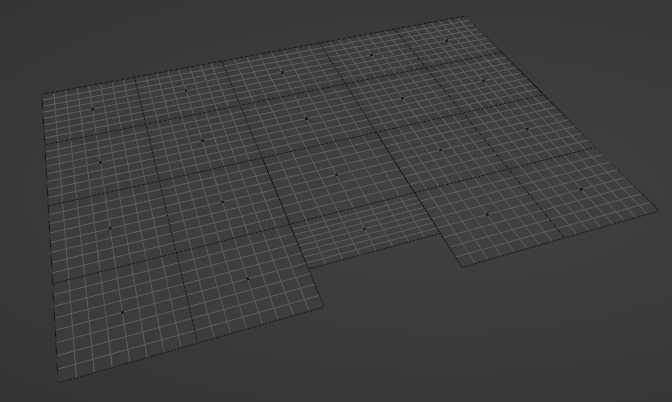 This is a problem for the displacement since some spots on the Plane will be much more busy than others. But whats even worse is that there can be holes in the geometry at the edges that connect different sized rectangles, as shown in the picture (within the selection). 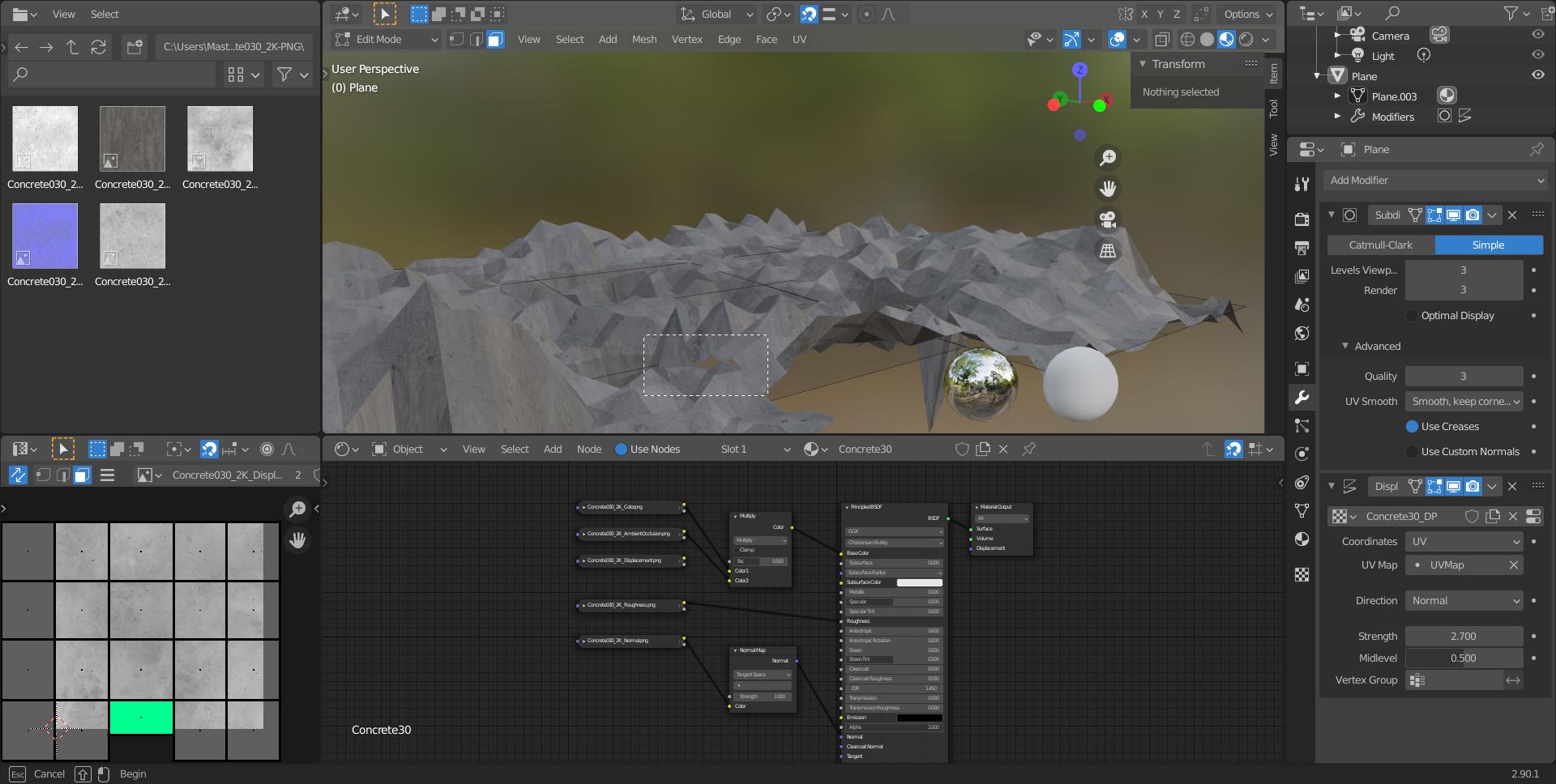 I am currently out of ideas how to takle this problem and I'm not even sure if this is the right way to set up the displacement for a non rectangular Plane.

hope i understand your request. you need a non rectangular plane to be displaced, right? I think best way should be insert a plane, subdivide it, select and remove not necessary vertex. 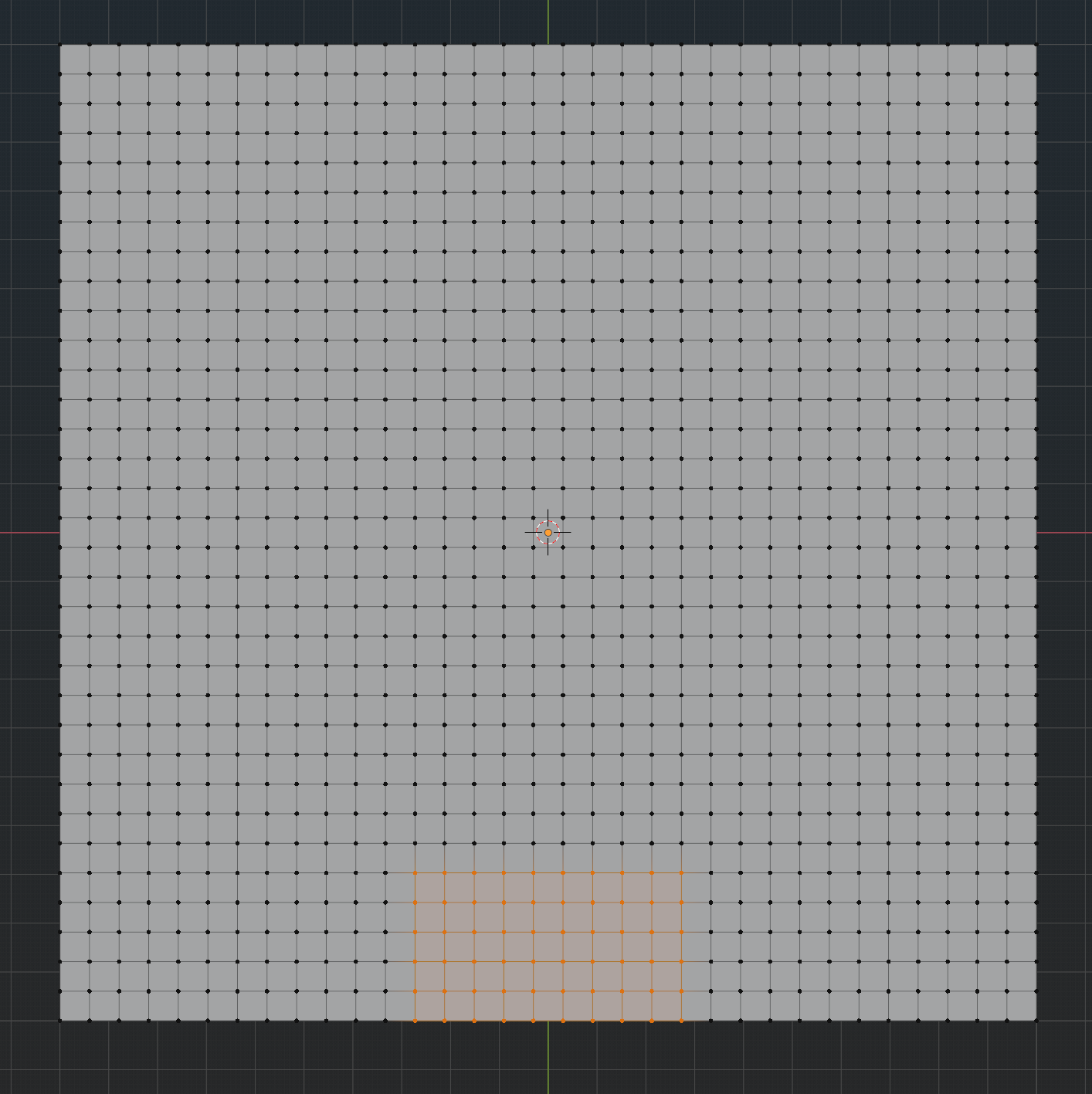 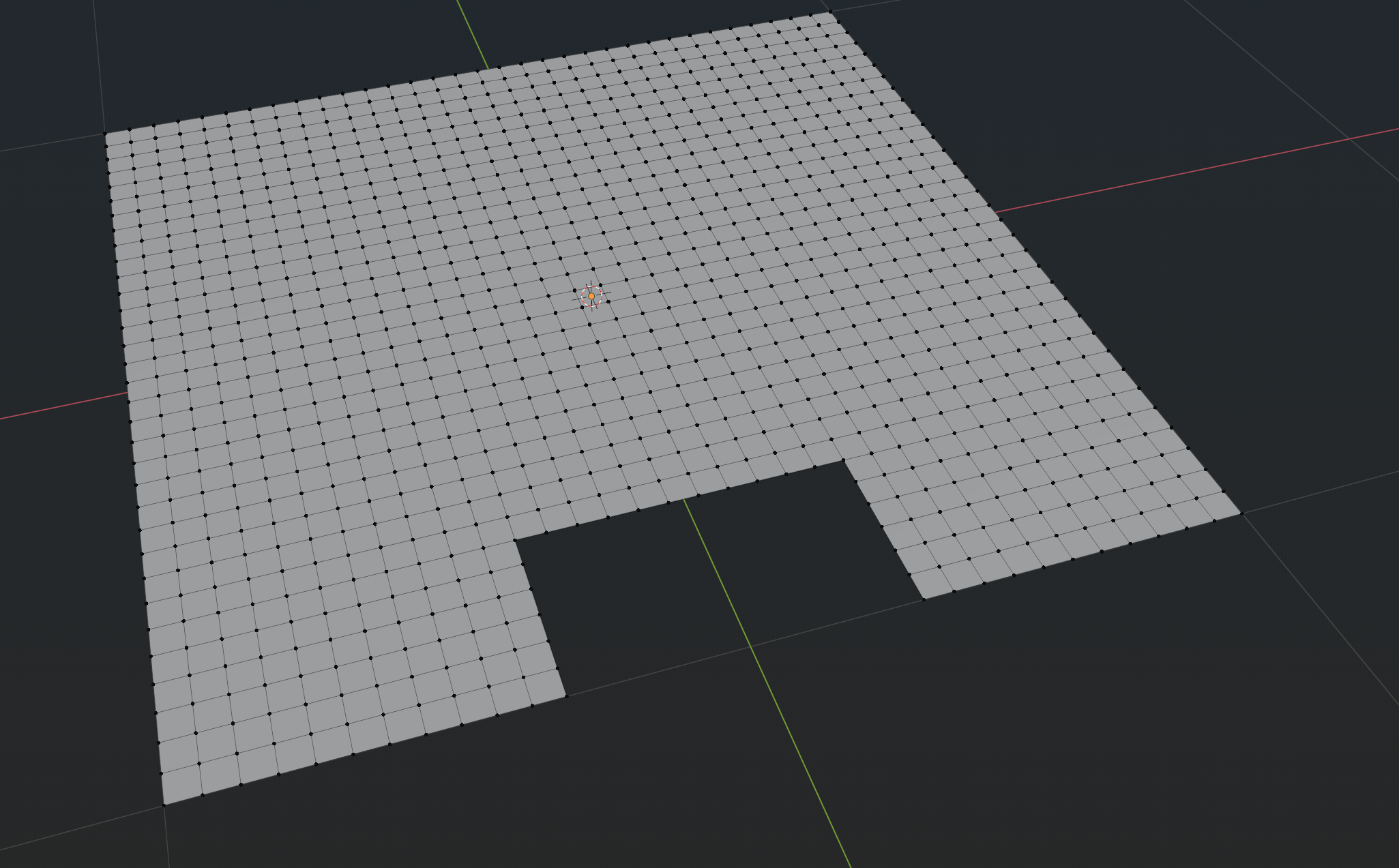 Then add the modifiers you need. in the image you can see a displace modifier with cloud texture and subsurf added. 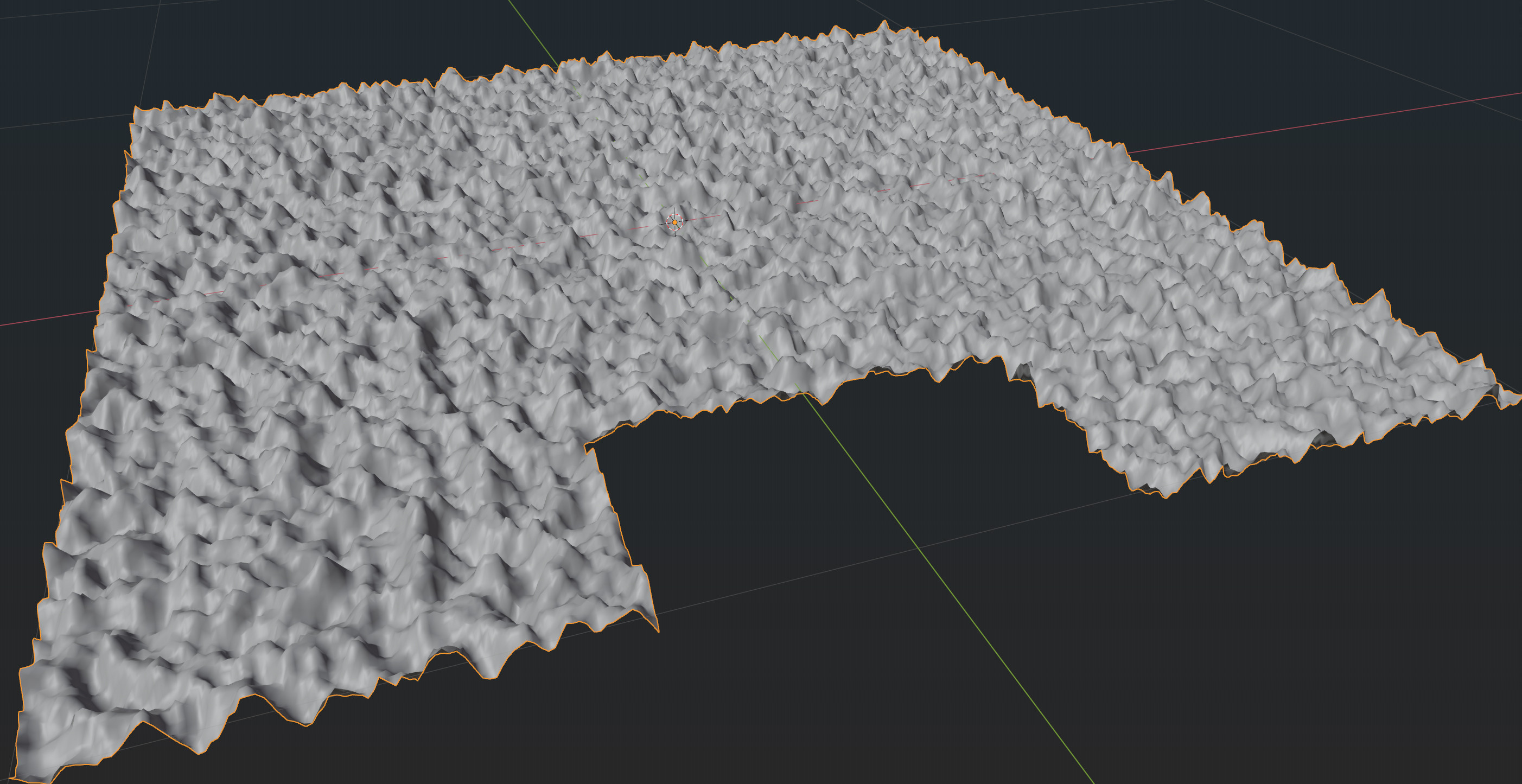 Them you can unwrap (you can do that in ortho top view and then uv -> project from view) and apply the shaders. 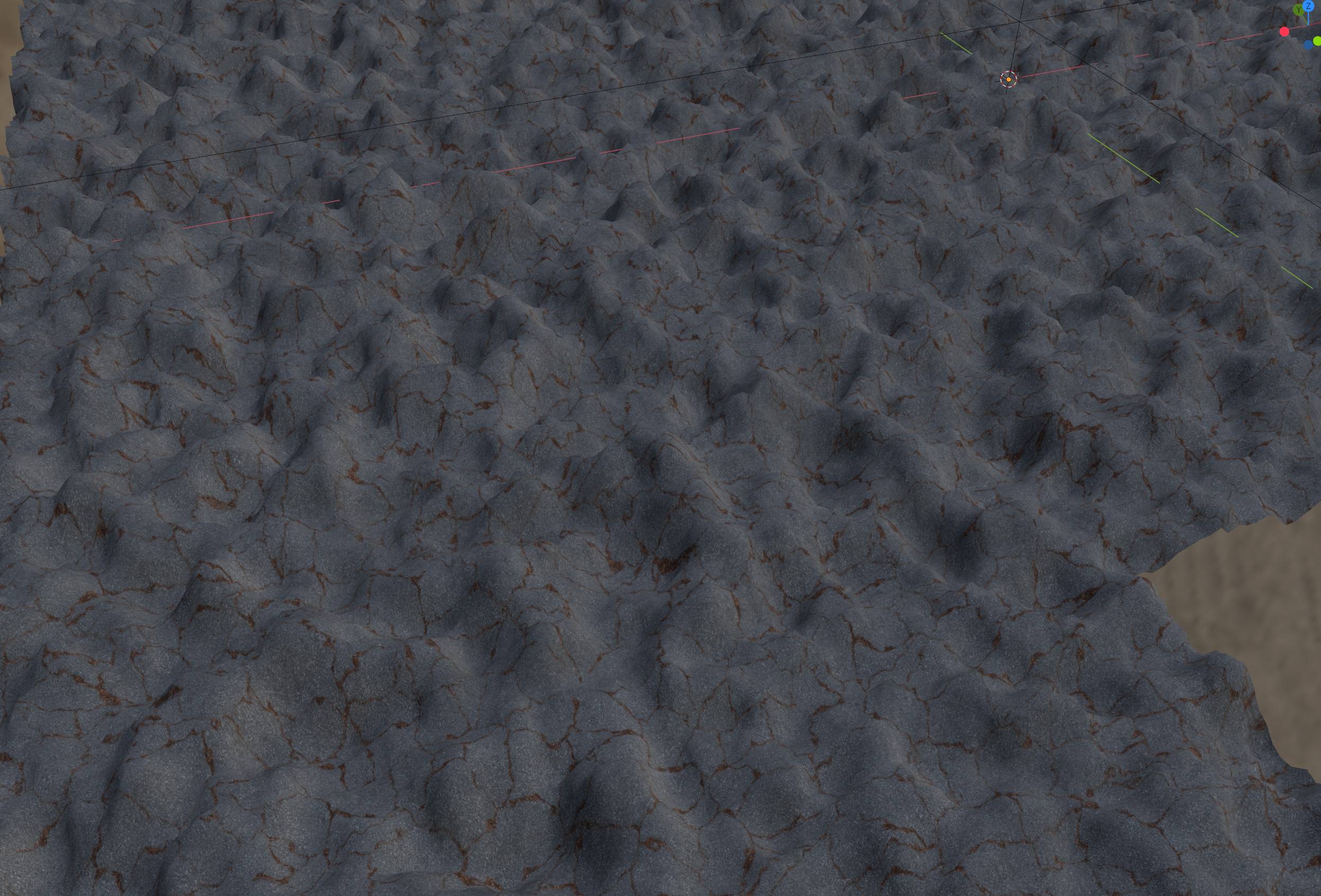 It was that you need?

Not the answer you're looking for? Browse other questions tagged texturing subdivision-surface displacement pbr or ask your own question.

1
How can I add a second texture apart from the one I'm using with displacement modifier?
0
Displacement Map (Micropolygon Displacement) displaced weirdly
3
how to use displacement node in 2.8
0
Displace modifier with black and white texture has sloping edges
1
Why is material with 'Displacement and Bump' set only showing 'bump' displacement in Cycles?