what is an overhang face

I was recently getting into some 3D printing, and I was checking out tools in Blender. I didn't quite understand what an overhang face in a 3D model was and what some angle values had to do with it.

First of all, I believe the question was migrated wrongfully, but let me clarify some:

What is an overhang?

An overhang does not exist in a model per se. Overhangs only exist in the print, and areas that will become overhangs are pointed out only by slicing software. But now, what is an overhang?

Overhangs are parts of a printed model that are not supported by the model below. Bridges are overhangs that have support on both sides but not in the center.

A good example for what in printing is an overhang would be the left arm of Rodin's The age of Bronze: 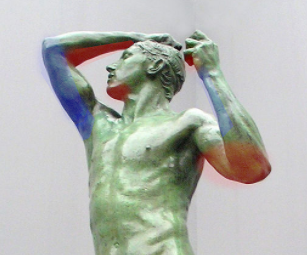 I have colored some areas red and some in blue. Blue are areas with a pretty steep angle, where the structure below the print supports the print being not over the print. These are not overhangs

Red areas are where there is no structure below (left am, chin, fingers of the left hand) or where a very flat angle does not allow the structure below to support it (right arm).

So, now that we looked at the areas where there might be support needed for the overhangs, let me load a 90 MB 3D-Scan of the statue into a slicer (Cura). It highlights areas that the slier considers overhangs in red. To do this, the slicer compares the angle of the surface to the horizontal: a vertical is 90°, a horizontal 0° and somewhere in between that there is the set "overhang angle". To see areas the slicer points out, I had do pan into the ground, and to make it especially visible, I chose to set the "overhang angle" down to 40° in the first case, and a more normal 60° in the other case:

Now, you can do tricks to make an overhang not an overhang - For example, by angling the whole statue back so much that the chin is pointed to the air, it is no longer an overhang, but I buy that at making the back of the statue an overhang. 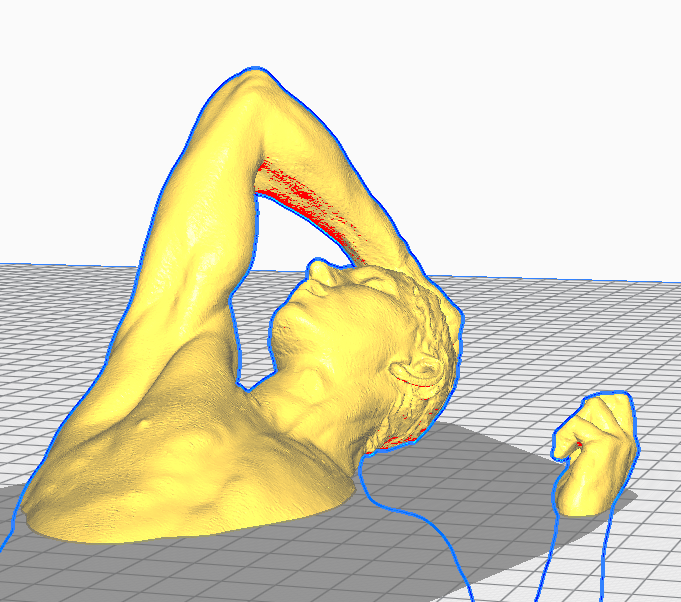 What has this to do with blender?

Nothing! Blender is a very powerful tool to modify 3D files, but it does (currently) not have a visualization of what is an overhang. It is good design to think of areas that will become overhangs in printing, but it'S ultimately the slicer that will show what is an overhang and what not.

5
How to properly create hollow text letter suitable for 3D print?
5
What does 'Distortion' in the 'Mesh Analysis' panel do?
6
How to deal with bad contiguous edges for 3d printing
0
Chopping excess bits off an imported stl :)
0
3D Printing Causing Issues