The first attempt was to use curve modifier, but the issue here is that the connector gets deformed as well.

I've tried a different approach, by separating cable to parts and making connector "follow the curve" with constraints. 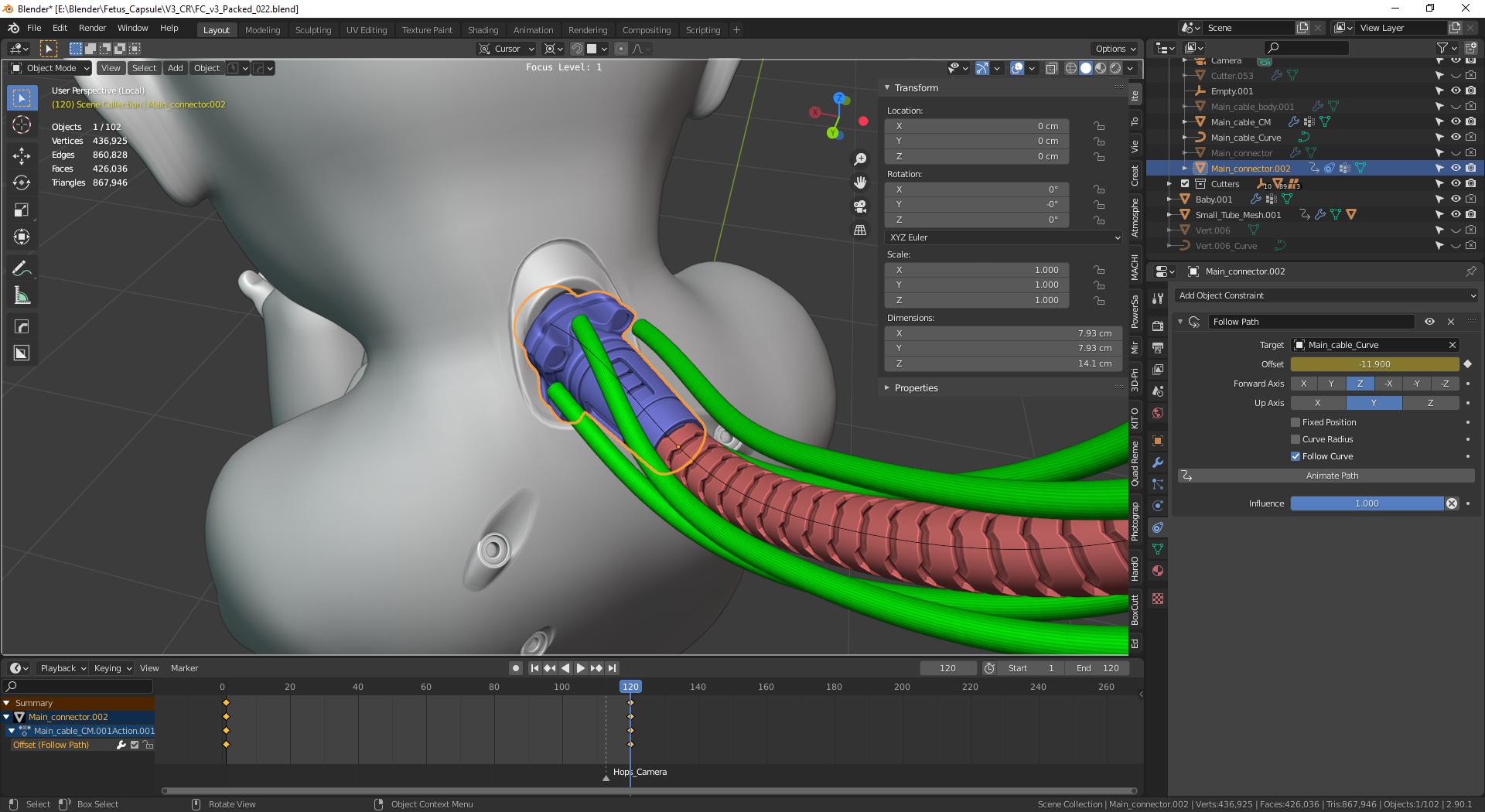 And now the connector and main part of the cable (red) are fine. But I can't get the tubes (green) to align to the holes of connector. I've tried to rotate it and so on, it's always misaligned at different points of the animation.

I've also attempted to use hooks to connect tubes to the connector, but it works only for short distances and doesn't fit the goal.

Any other approaches I can try? 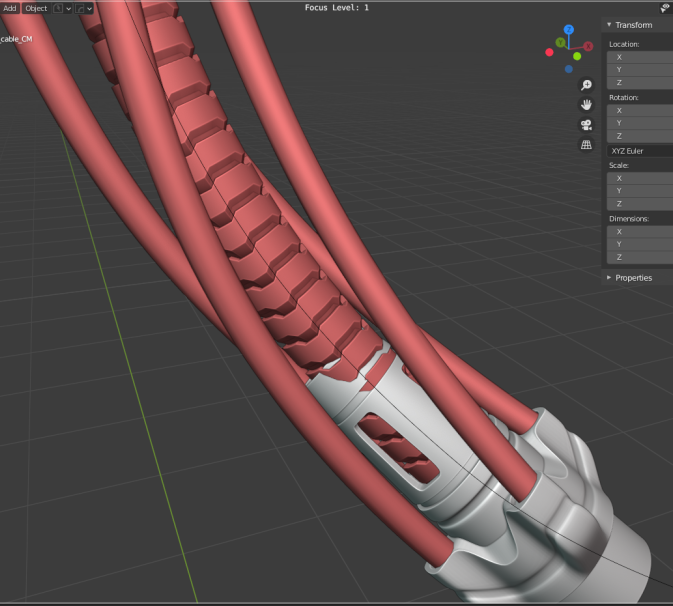 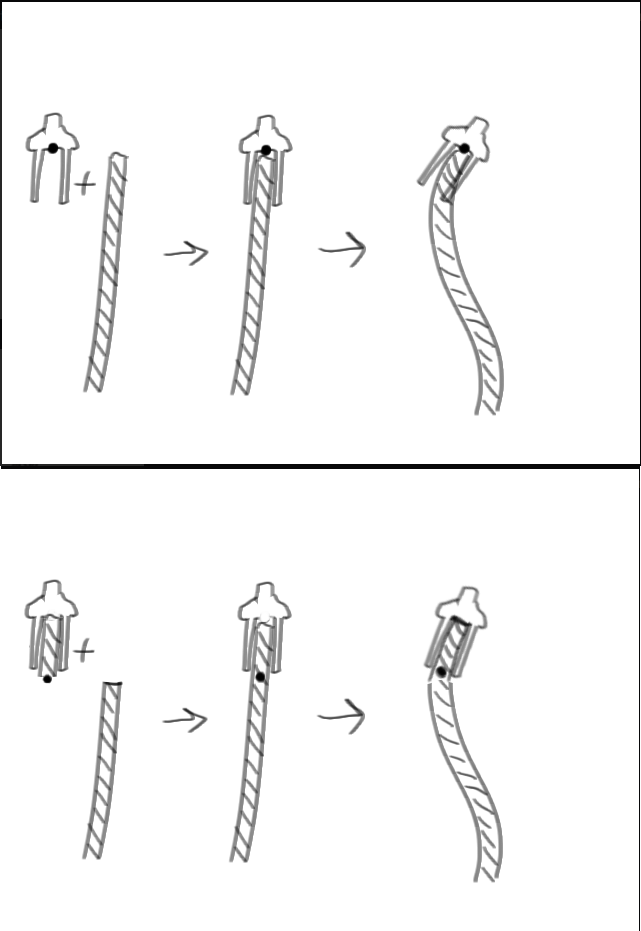 Edit: So my solution is not completely accurate, because as you say the big cable and the tubes do not join at the same point of the plug. 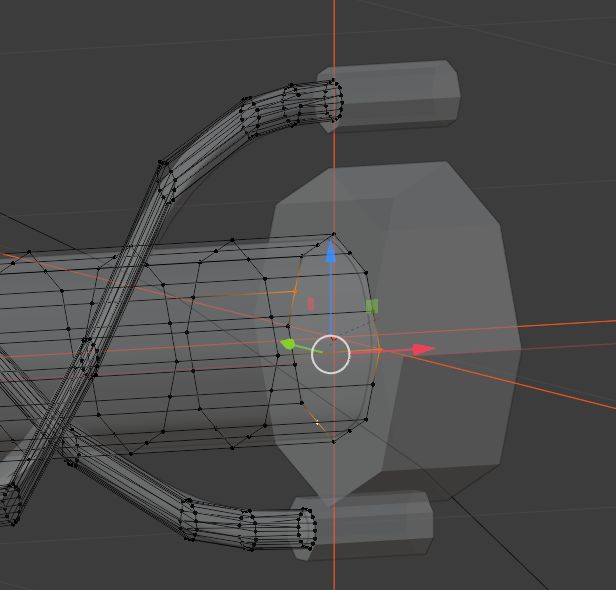 Parent the plug to the empty: 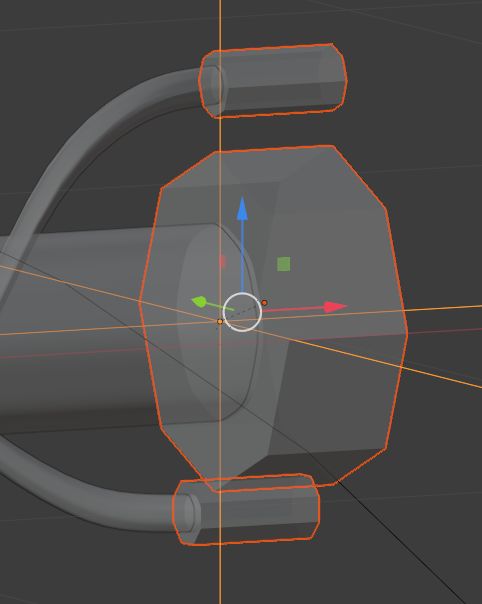 The goal is to get an animation as on picture 1 of the question.

We can connect the main cable to connector using @moonboots solution. But first we need to cut off the part of main cable which goes into connector. Then we join that piece with connector-object (as you can see on the left). From here follow the @moonboots answer and you'll be done with the main cable.

There was a problem with tubes misaligned with the sockets on the connector. The solution here is to use Hook modifier in addition to Curve modifier but limiting each mod with vertex groups.

Let's deal with hook first. Go to the Edit mode and select the bottom vertices of the tubes and place a 3d cursor at the center (I'm using a free addon "MACHIN3tools"). 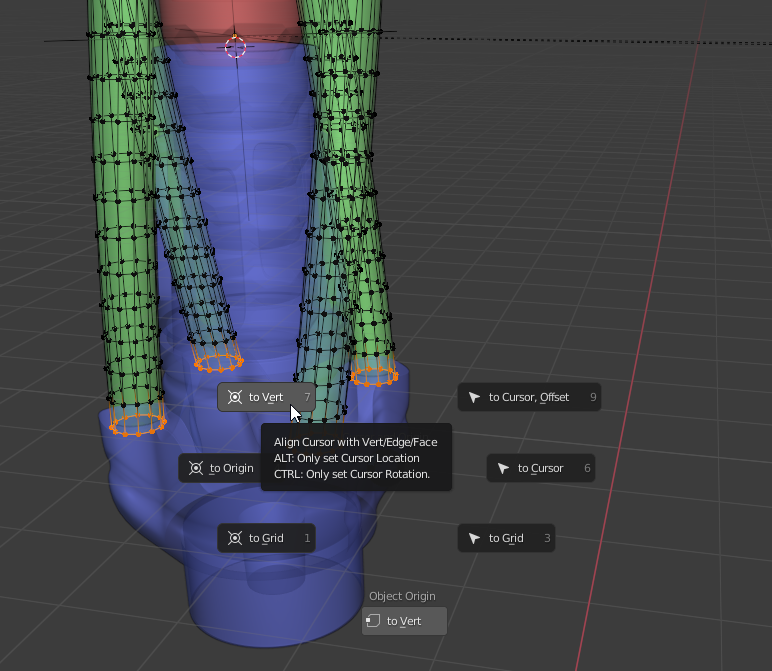 Then go to Object mode and add a new Empty object. Then select an empty, select connector, press Ctrl+P to parent Empty to a connector.

Then go to Edit-mode, press Alt+Z to enable X-ray mode and select several rows of vertices at the end of the tubes. Then go to the "Object data properties" tab and create a new vertex group (I called it "Hook") and assign selected vertices to it. 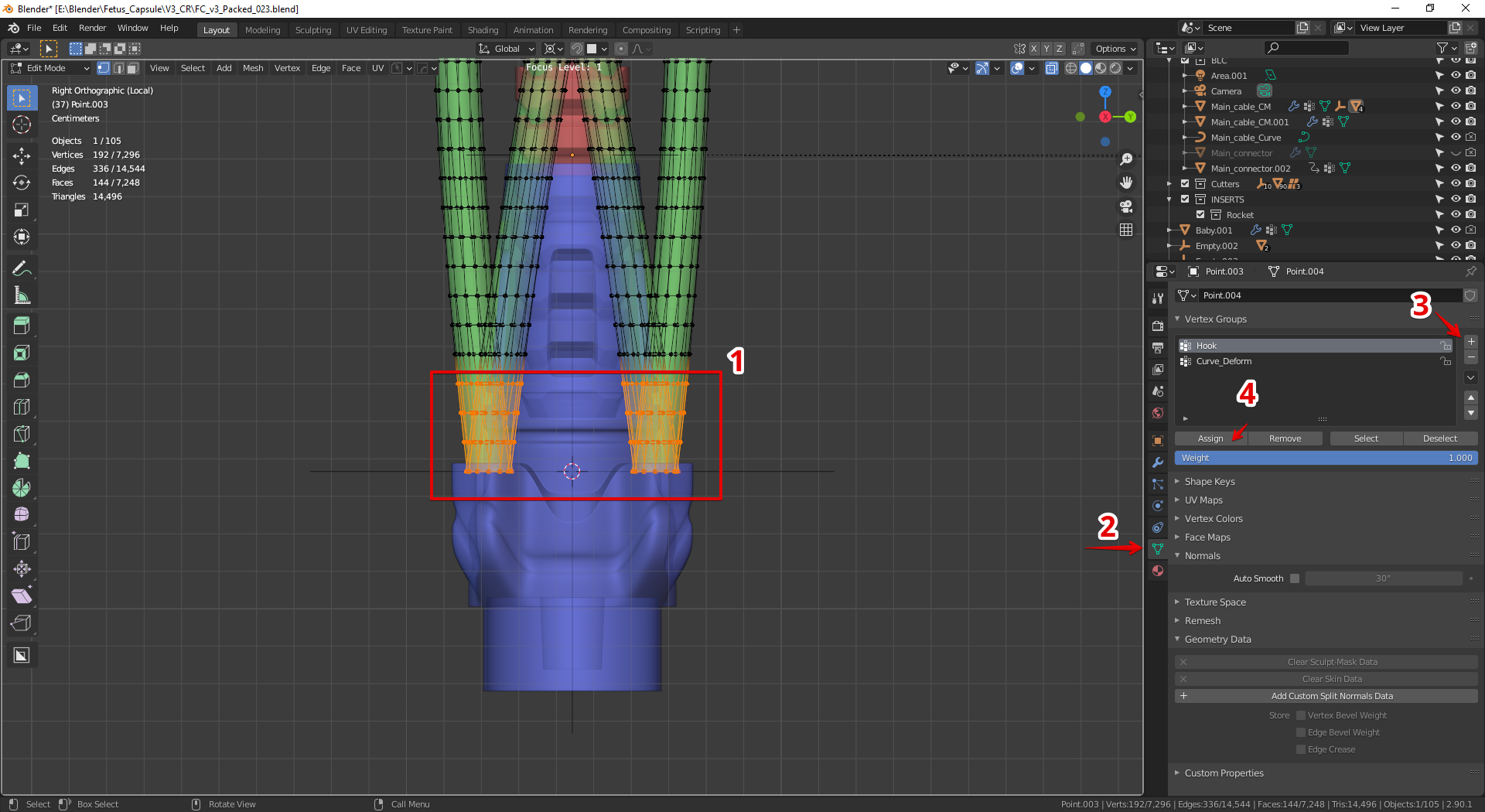 Parent the tubes to a main cable (be sure to check, that origin points of these objects are at the same spot), and add a curve modifier to the tubes (with the same settings as for main cable). Then limit Curve mod with vertex group we created earlier. 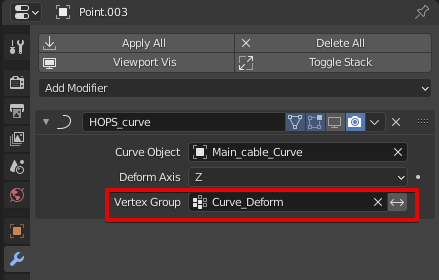 Then let's add a Hook modifier. For the Object select the Empty you created at the end of tubes, and for the Vertex group select "Hook" group. 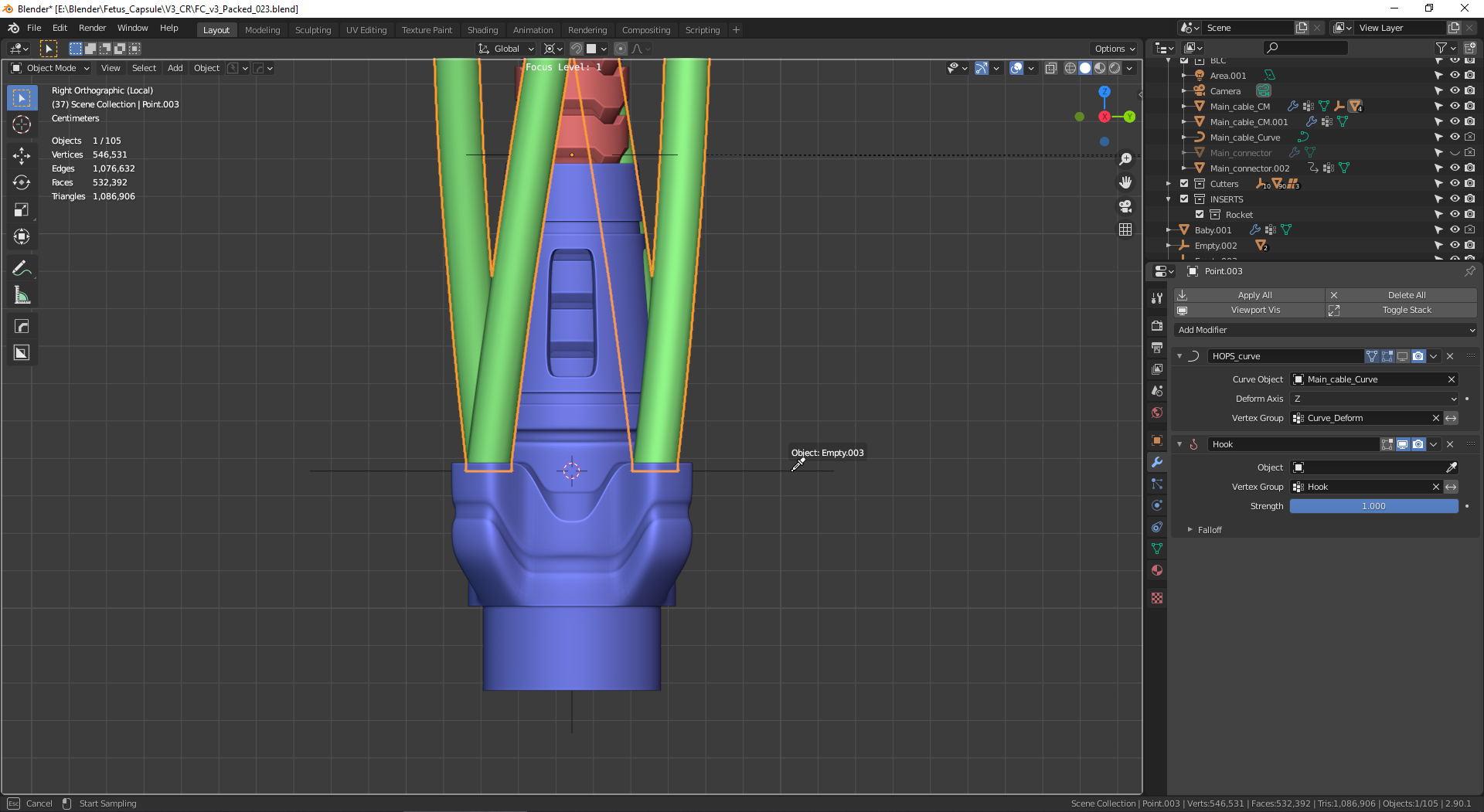 Now let's see how this all behaves. I'm gonna show visibility of the curve mod and drag it along transformation axis (Z in my case). And we can see that it's going crazy on at the point where 2 vertex groups meet.

Now let's add to the tubes another mod that fixes it all up. It's called "Smooth corrective". The parameters may vary, you can see the values that worked for me on the picture below. 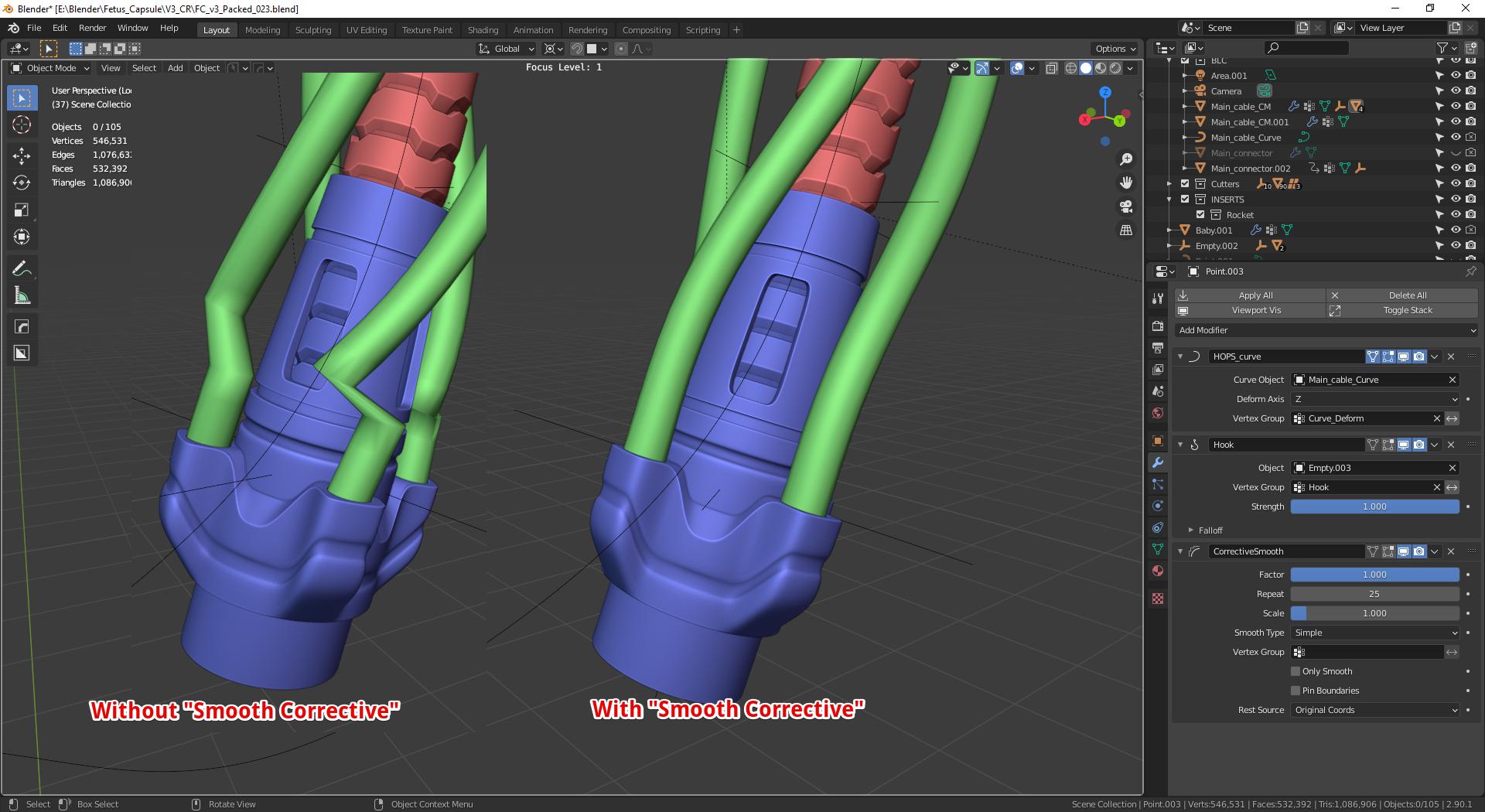 Not the answer you're looking for? Browse other questions tagged modeling animation modifiers bezier-curves or ask your own question.

6
Duplicate along path with uniform spacing
13
Three bones following a curve
0
export animation to fbx or md2
8
How can I make holes on a wrist strap?
1
Curve modifier doesn't do anything
1
Creating a “bubble” shape lense for goggles
1
Making trails in a curve mesh created by the Animation Nodes add-on
0
Solidify Modifier going in all directions
0
Advice on how to model this piece of a chair?