What do the dashed lines in the outliner mean?

Two of my objects are somehow linked to each other in that one of the items are copying itself on the other but I can't figure out how. I don't think its instancing because when I unparent the object and reparent it with another one it doesn't work, and its not using a hair modifier to do it either.

Main question: What relationship are the dashed lines in the outliner indicative of?

I know the green triangle with three dots is a mesh and the solid orange triangle is an object. I pointed an arrow to it in case its hard to see. 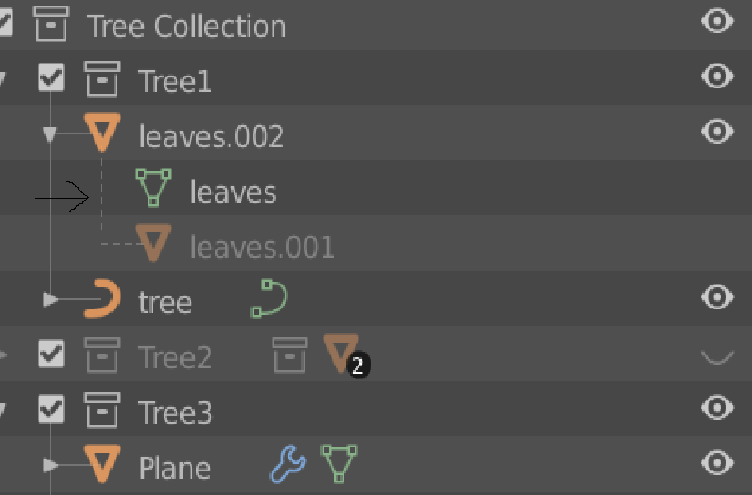 Dashed line means the child object isn't present in the same collection.
It probably got left in a different one.

The parent-child relationship still exists, but the 'misplaced child' :( won't be treated as a part of the collection (for instancing, particles or simulations)

Not the answer you're looking for? Browse other questions tagged parent outliner or ask your own question.

6
The Outliner doesn't show Parent-Child relations in blender 2.8
7
What is the difference between 'Unlink' and 'Delete' in the Outliner?
0
Parenting an object does not parent but has broken or dashed lines
2
Deleting from the outliner
3
What does the torn sheet of paper icon in outliner mean?
3
Blender outliner what are the differences between the little green men?
1
outliner : to cycle the find result in outliner