Trying to fill an opening in an object and match depth

I just started 3d modeling with Blender about 3 weeks ago. Steep learning curve but I was able to muddle along (thanks to this site). Now I am stuck. I am volunteering at a non-profit and I have to modify an existing container that has some openings in the bottom to allow wires to pass through. I received this as an STL file (I think from AutoCad). I need to fill in a portion of some of these openings. The openings and my patch are non-uniform in shape but should be the same depth (along z axis). I tried making a face in the opening and solidifying it down until it was the same depth as the existing opening. I guess I thought this would magically become part of the existing mesh and I would have the new smaller opening. Well, I had a lot of non-manifold edges.

I finally backed down to a simple test case to try to understand what was going wrong. I made a simple frame 50mm x 50mm and a depth of 5mm. This was made by applying a difference boolean to two Blender cubes. I then tried to make a "beam" go from one side of the frame to another on the y-axis. First I tried subdividing the two edges on the top and using those 4 vertices to make a face which I solidified downward to the same 5mm depth. This gave me non-manifold edges with the "multiple faces" selected. I figured this was because of the hidden faces at each end of the beam. So, I was able to delete the faces on each end of the beam but the original frame face was still inside.

I then tried again from scratch. This time I put two edge loops on the inside of the frame across from each other along the y-axis. I selected those two faces and deleted them. This was going to be where the face of the solidify object would wind up so I thought it had to go. I then did the same face solidify and then deleted the face on each end of the new beam. Now I get non-manifold edges with the "boundaries" check box. 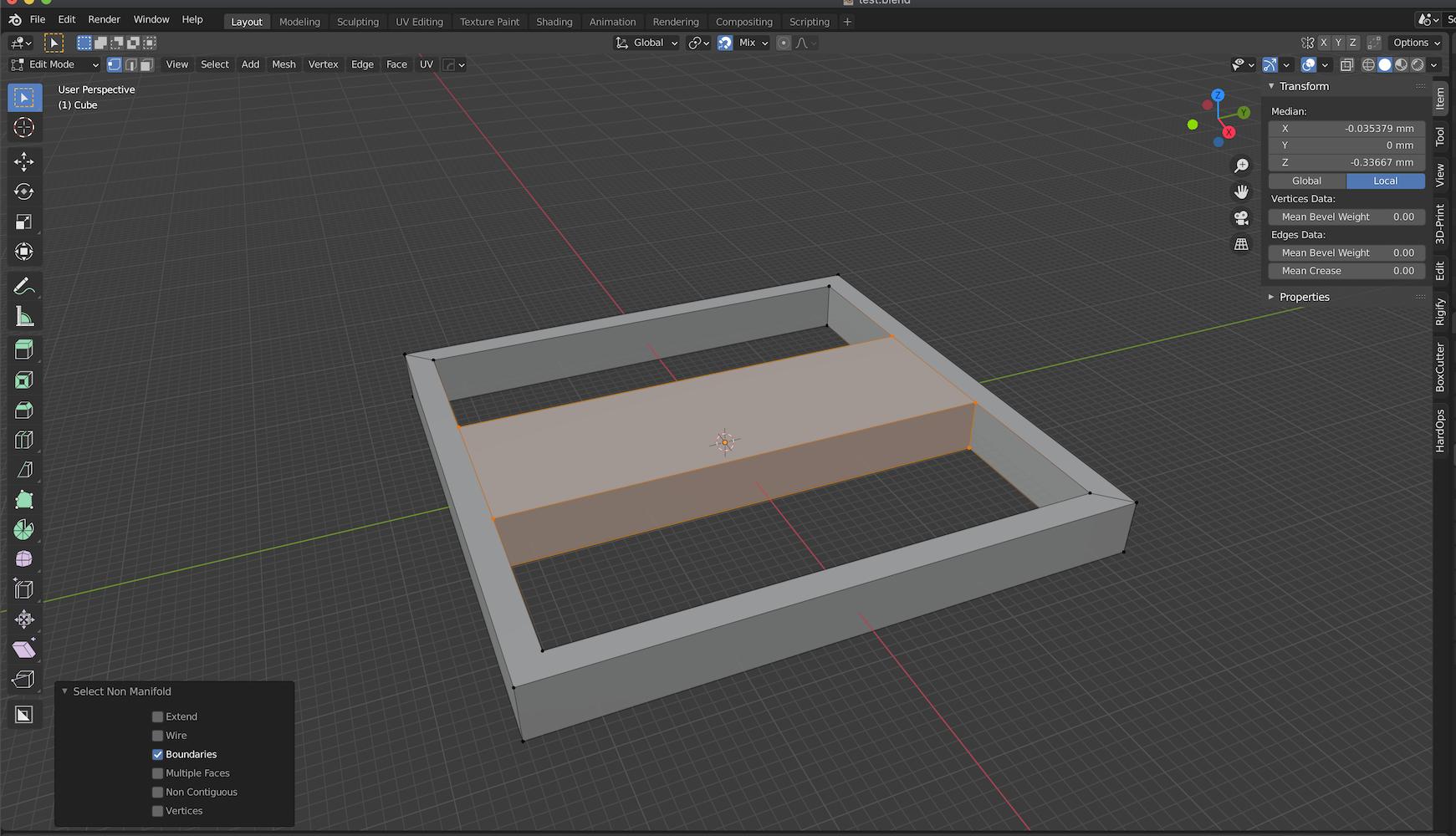 I am at a loss. I must be missing something pretty fundamental. I thought filling in a hole like this would be easy but I can't find any examples of someone modifying an existing object like this.

Here is my blend file.

Update: I was still messing around and found that the "Make Manifold" option in 3d print fixes it. So, I must be close. Really want to understand what is going on here. 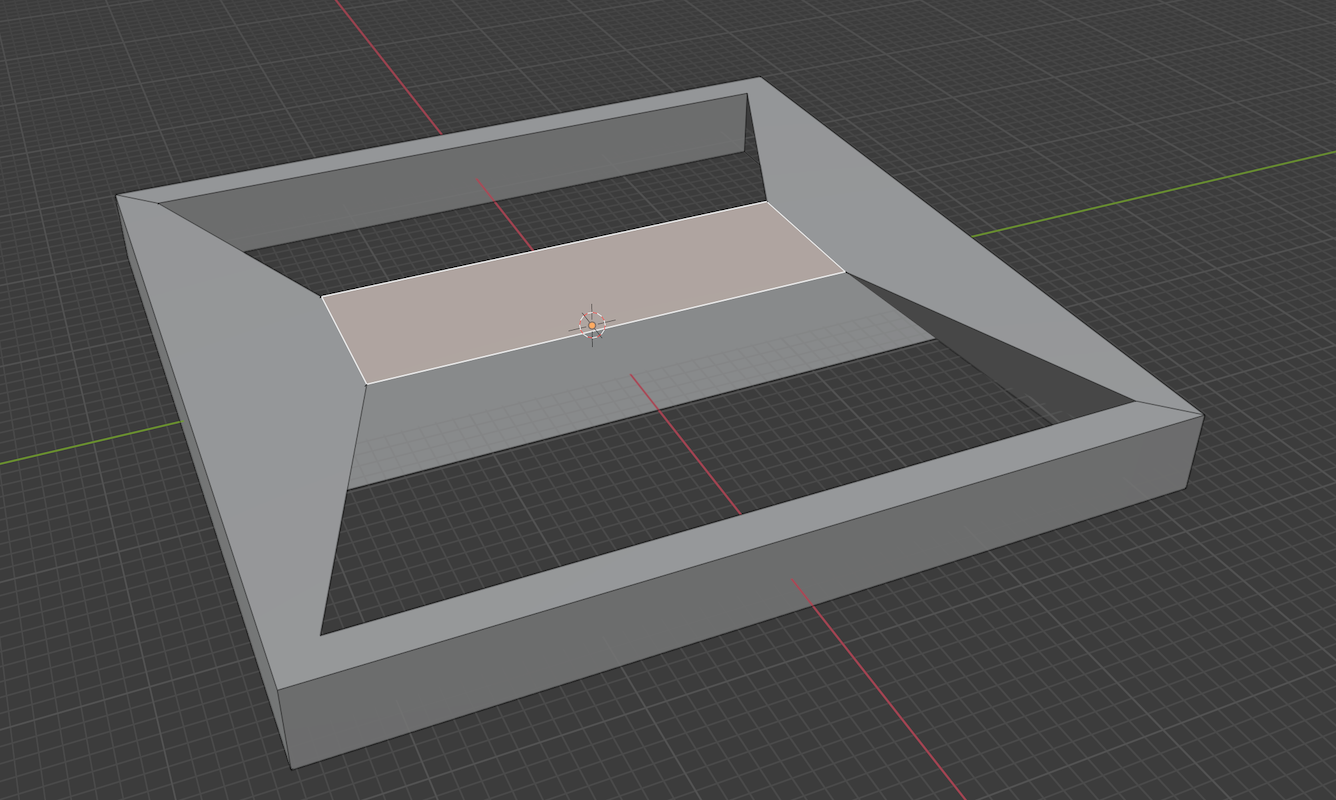 Final Update: lemon was able to solve my issue and in doing so he shared a very great diagnostic/debugging technique which I hadn't seen in all my previous searches. I wanted to make sure to point it out for any beginners following me up the Mt. Everest of learning curves. ;-)

If you are having problems with an area of your mesh the 3d print tools or select non-manifold geometry will indicate the basic area but it can be hard to see what is going on. From lemon's answer and his image I learned the following..don't be afraid to grab a vertex or edge or scale a face. Move it around and it will be obvious what it is and isn't connected to. You can always do a RMB or ctrl-z to put it back when you are finished looking. I have been working on a more difficult variation this afternoon and using this technique I have gotten to 0 non-manifold geometries every time (eventually).

Thanks for the tip, lemon!

The non manifold part comes from the bottom face of the "bridge".

You can see that if you select the face and scale it down: 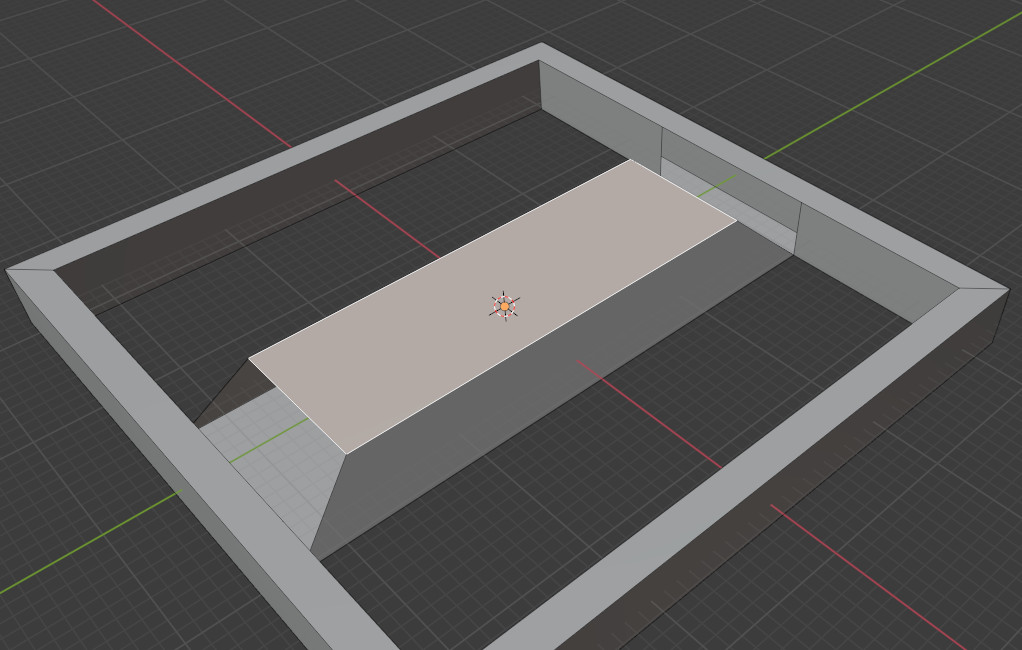 Its sides are not linked to the main part of the mesh.

Few modifications in the file above, so that all faces are quads.