Make light visible once it passed through a transparent object

I am looking for a better solution to make light in Cycles only visible, once it passed through a transparent object.

Example which is actually pretty close but has a few flaws, see below 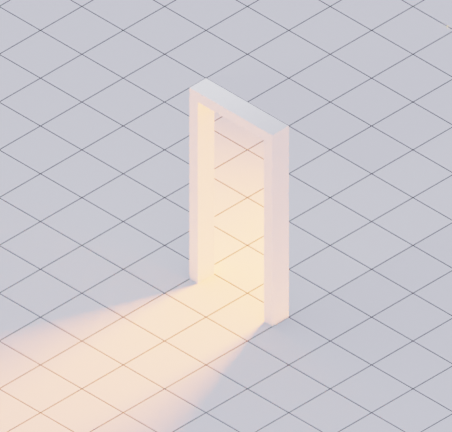 A doorframe seems to have an invisible lit room behind it.

I created something like a corridor to block the light to the sides but still light the floor inside the doorframe. I took advantage of the isometric perspective to get away with a kind of wonky shape. The backside (opposite of the door) is just an emissive material. 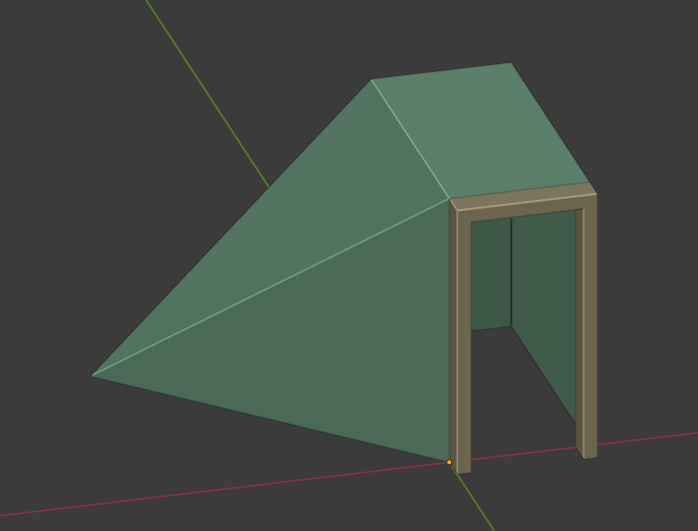 The material for the corridor: 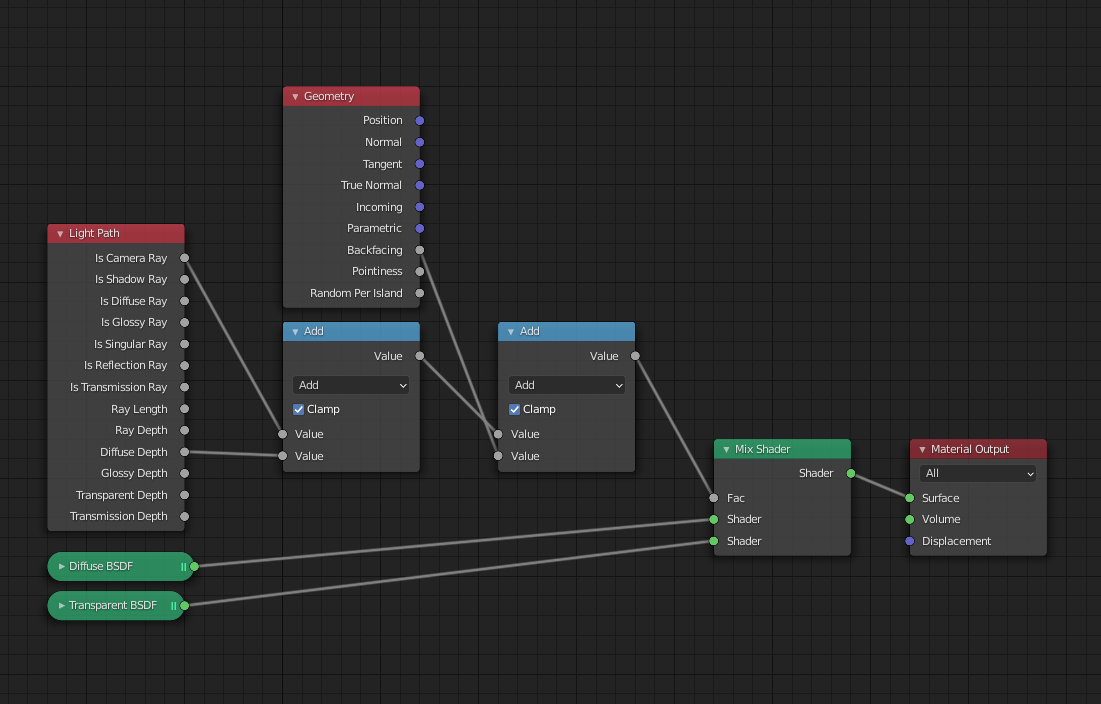 This method works, as long as there are no other light sources in the scene, which I need. 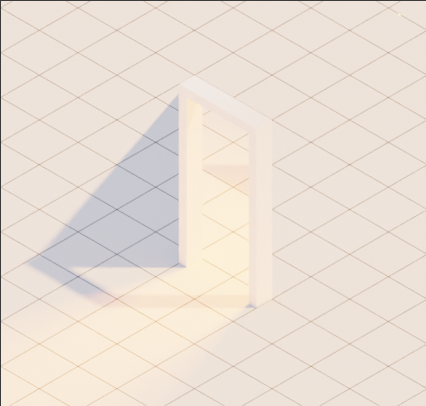 Problem: The corridor blocks the light from the right and casts a shadow.

No corridor this time, just a transparent door guiding the light. 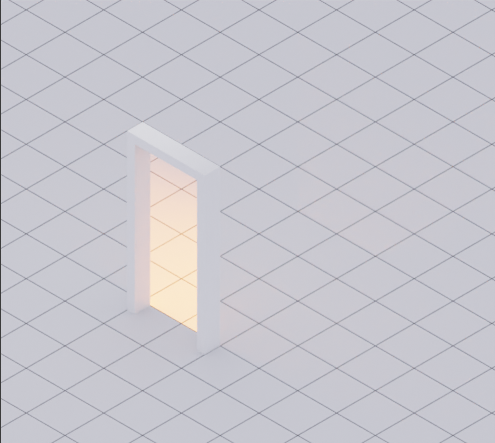 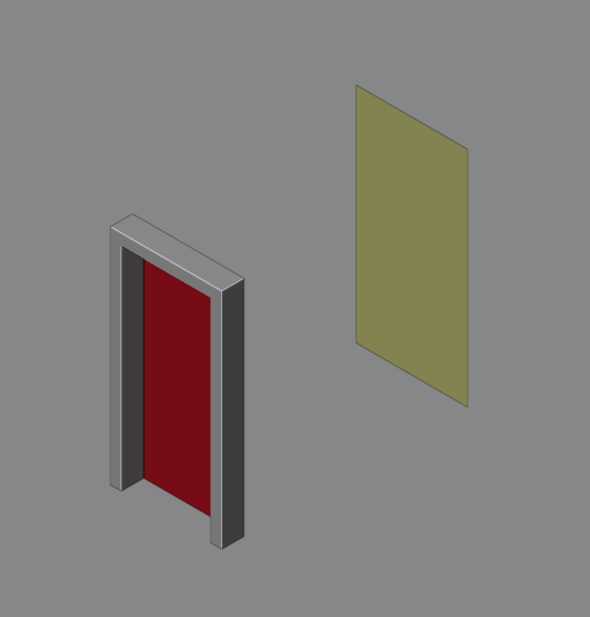 Red is a transparent material, the yellowish meterial is my light source: 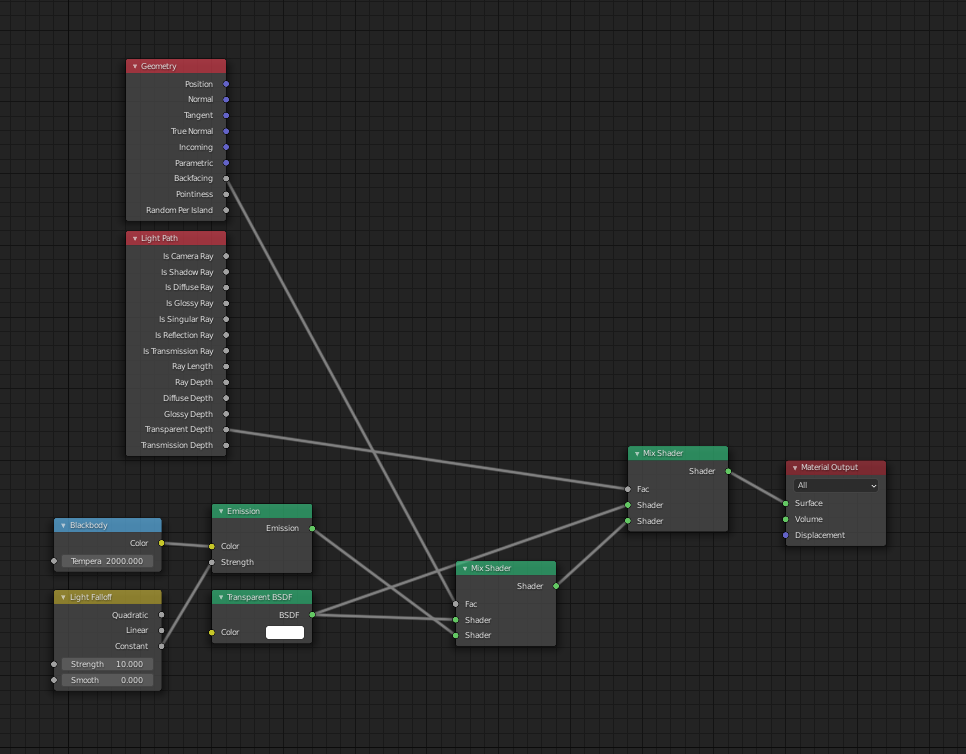 The problem is the missing cone in front of the door.

Any ideas on how I could improve my methods?

(This answer revised thanks to @lemon pointing out what should have been obvious..)

If you're prepared to use OSL, (and therefore the CPU for rendering,) this script might be a tool to add to your box. By tracing back down the incoming ray to a light, it returns information about the object being lit. It's not all used in this example, but might be useful if you go for a different effect.

ObjectIdx and MaterialIdx are the Pass Index settings for the object and material being lit. LitP and LitN are the location and the normal of the lit point, in World space.

Make a 'Portal' plane, of ordinary fully transparent material, occupying the doorway. For this tree, give it a Pass Index of 20 in its Object > Relations panel. You could use other indices, for other portals.

This node set-up for the yellow through-light restricts the lighting to the portal itself, and areas seen through the portal, contrasting those seen from behind and those seen from in front. Since writing, you've told me that the camera doesn't need to move, so the second restriction, (most of the bottom branch) is not required. Just use the Transparent Depth on its own. My effect looks a bit odd, anyway.

The attached .blend is a bit more complex than needed just to illustrate this method.. you would probably just want to use the script, one way or another, to suit your particular purposes.

It is not meant to be a serious answer, more like a solution on border of insolence :)
I lost patience, so I extrude a face for light on a floor :) 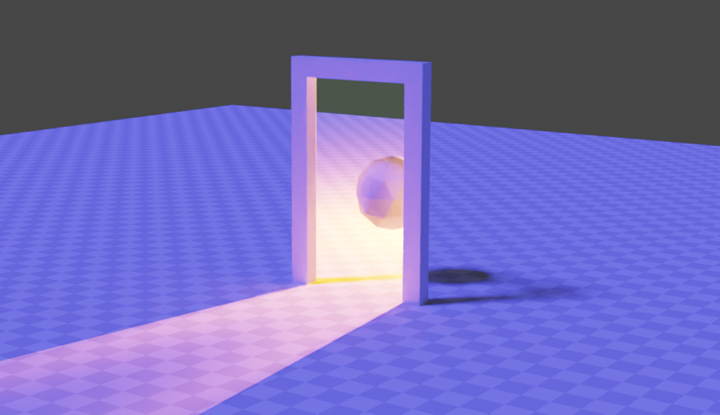 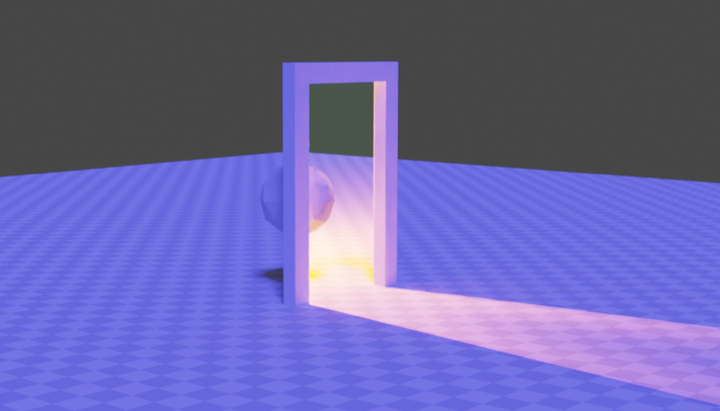 Divide node for a stupid to better incorporate colors. 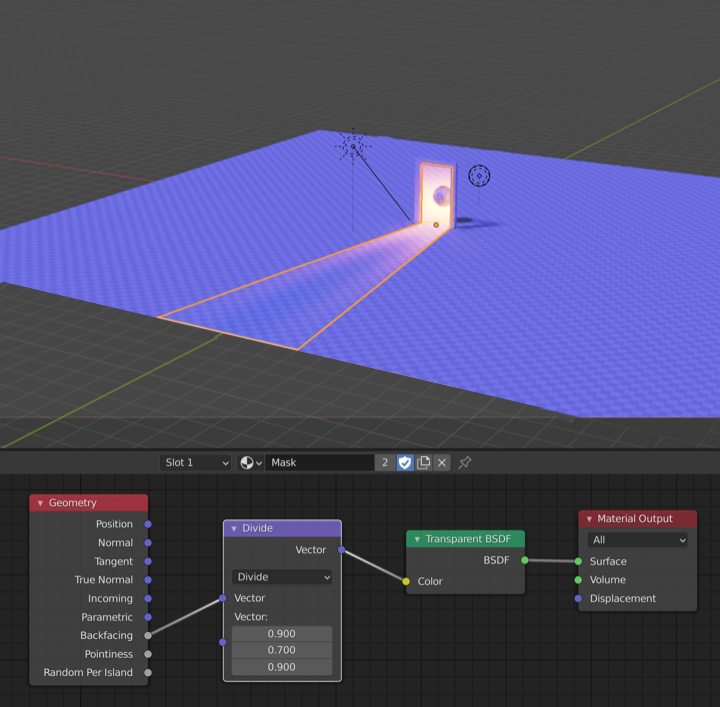 As extension I tried to animate "floor light" according to light position. I just could not move Empty on edge and keep virtual center at zero coordinates at the same time. I will try to check that later.

A simple solution that may meet your need, but as @vklidu pointed me out in the comments, this is not working well with other lights.

The area where the light is placed is surrounded by a big box (selected below) with an open face where the portal is placed. 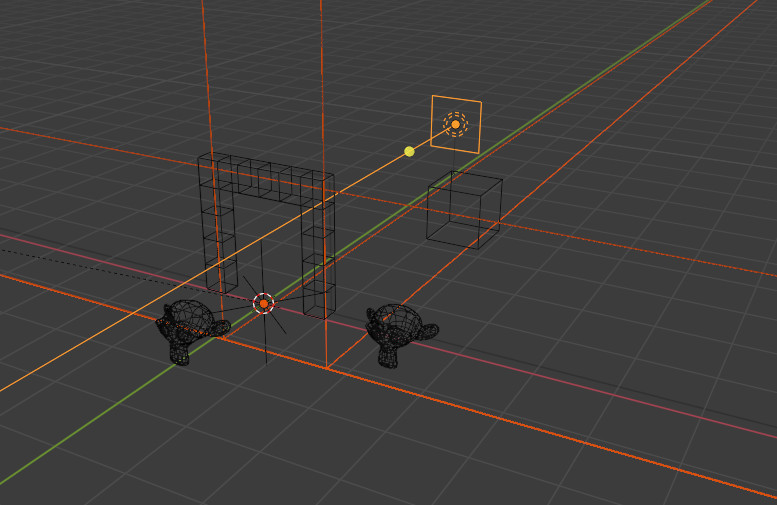 The node tree for this surrounding box is simply a "glass" with IOR set to one (flat transparency). 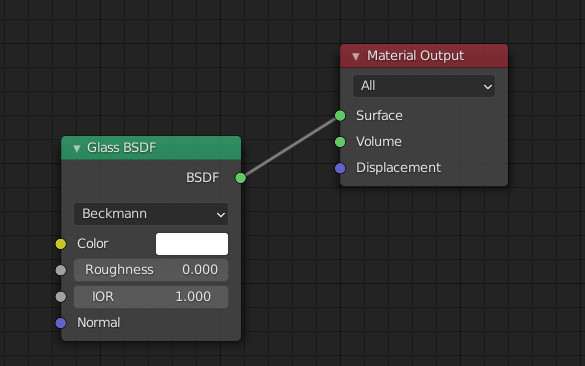 The light source (an area) also has a node tree: 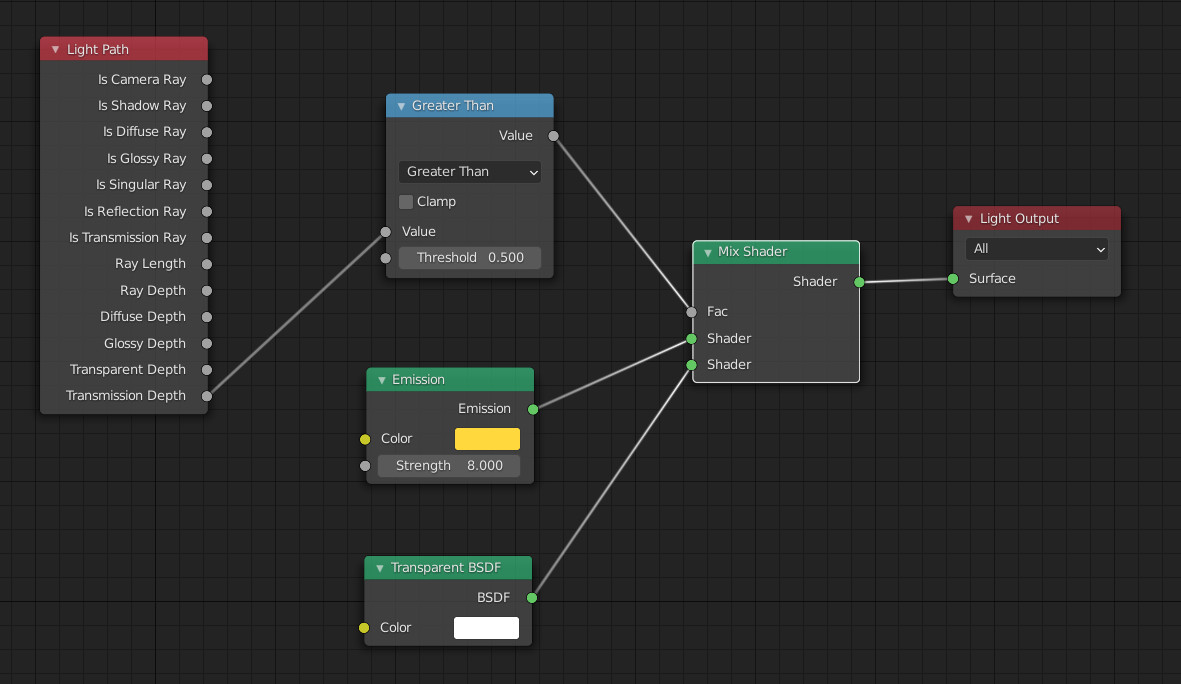 It is emission shader except when the transmission depth (what comes from glass/transmissive materials) is at least 1.

Additionally, the surrounding box has a solidify modifier, as if not the light may go through it at the intersection with the floor plane.

There is some limitations, depending on the shape of the surrounding box (from which points of view you want to catch that).

The principle is the same with transparency instead of glass, but needs to fake a bit. But that allows other lights to work well it seems. 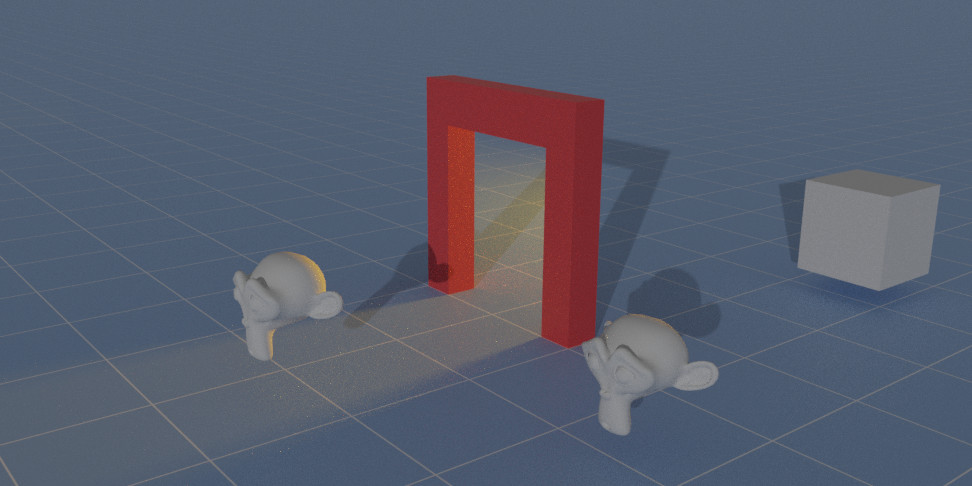 So same mask shape as for @vklidu answer, thanks to him, but different node trees. 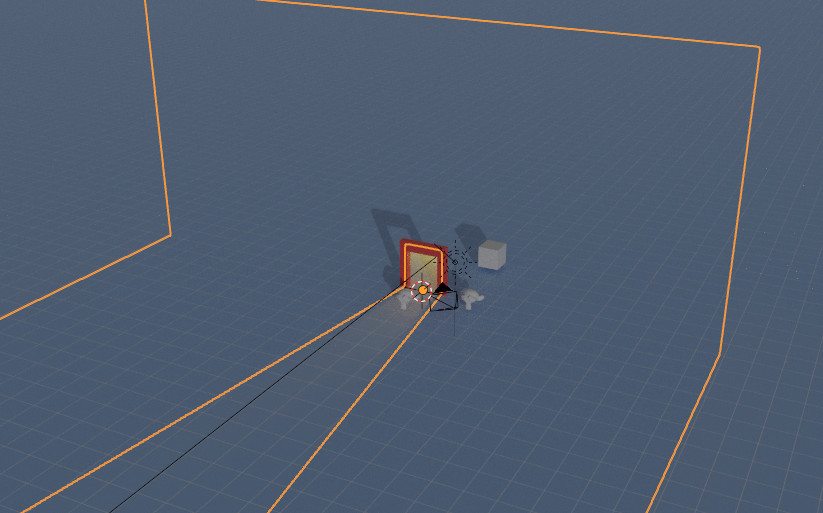 The nodes for the area lamp:

The ones for the mask:

Not the answer you're looking for? Browse other questions tagged materials light or ask your own question.

0
Make light pass through solid object
0
How to make light pass through hole?
5
How do I control the blurriness of light through frosted glass?
1
Colorramp node makes colors clip or blow out
2
Mix shader object (semi-transparent) causing unwanted light spots with Cycles on material beneath
8
make an object that doesn't interact with light