Here's my problem, I'm trying to pivot around where my 3D cursor is located in the picture. I've tried to set "orientation" to cursor in multiple places, none of them seem to do anything. When I scale it's still around where the scale pivot point you see in the picture is. 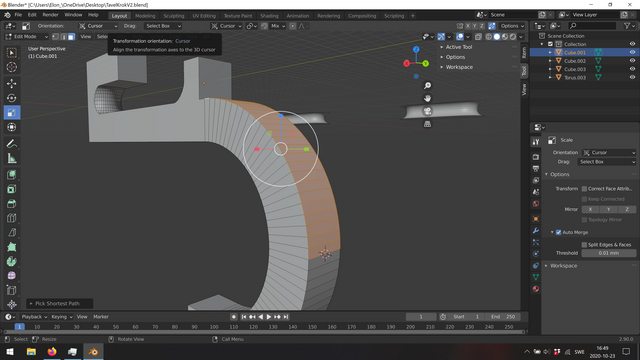 Second part of the question, the move operation has the ability to snap to vertices after locking to an axis, so if you want something at the same height you can just lock to your Z axis and hold your mouse over the vertex you want to match the height to and you're done. I haven't been able to use this feature with the scale operation. I have the exact same problem, I want to scale the selected area to match the heigh of the notch above it, so using the same logic as the move tool I would scale it, lock to Z and snap to the height I want to scale to. This does not seem to work (Snapping doesn't seem to work at all using the scale tool). Is this just a bug or a feature to be implemented in the future? Cause it's really really really really really really annoying to have tools work in completely different ways when they basically do similar things.

You need to use Pivot Point > 3D Cursor (right next to it).
Snapping while scaling also works just fine.

Not the answer you're looking for? Browse other questions tagged scale snapping 3d-cursor transform-orientation or ask your own question.

51
Snap object on top of surface of other object

2
Is it possible to have Blender orbit with pivot point the mouse cursor?
0
Snap vertex to face along a non-perpendicular direction
5
Extend the length of a cone
6
How to align view to 3D cursor orientation?
5
Is there a standard way to move 3d cursor with axis constraints?