i have tried everything and it does not move as an dynamic active object. clear parent does not help. it has an "child of" object constraint: 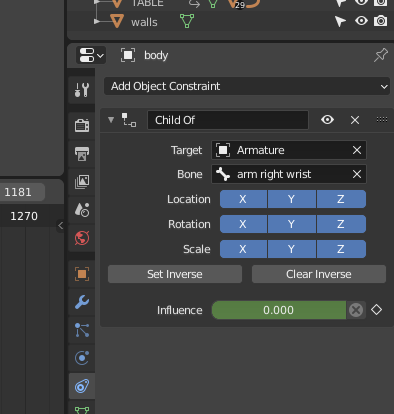 There is no passive object. at least not yet. the closest topic asked previously is this:

Object physics not working when moved with armature?

that says i have to parent the object, containing the active object. i have no "passive" objects to parent to something. the object is parented through constraint to the armature's left hand.

and it doesn't fix with applying scale:

and none of these helped:

How do I Attach a Rigid Body to a Bone?

i have removed the "child of" and the object still is not dynamic. the "unlink" option at the context menu at the outliner of the linked object does not unlink it. With the "child of" constraint removed, it then can be unlinked through context menu, but still not moving when animated as a dynamic object. i have tested with a new file. results was that this odd problem occurs only when an item is linked to the armature (through any way), but the problem solves when item unlinked and removed from the armature as an linked object visually at the outliner. but in this blend file, doesn't work. it never moved as a dynamic object by any ways. my scene:

EDIT: Same happens to any item. idk how but before fixed that a new item [a cube] got dynamic physics but i forgot how and never got it to work again. here is a video of what i do.

EDIT: I got it to work with starting from frame zero. but still not working on the object that was used first in the scene. The video of the same method, performed on an appended and just one part of the desired model from a backup of the blend file, unlinked and no parents, constraints. scale of all objects applied later and had no effect:

FINALLY FOUND OUT THE SOLUTION: i have checked and tested anything, and saw that nothing, old or new, linked or not, objects, will not animate after frame 250. i could see the cache like down the timeline that stops after this frame. according to this page ( https://docs.blender.org/manual/en/latest/physics/rigid_body/world.html ), i have increased the Scene Properties/Rigid Body World/Cache/end from default 250 to the desired, in my case 1286, and started the whole animation from frame 0. and it cached all with the line below timeline and at last this was the result: 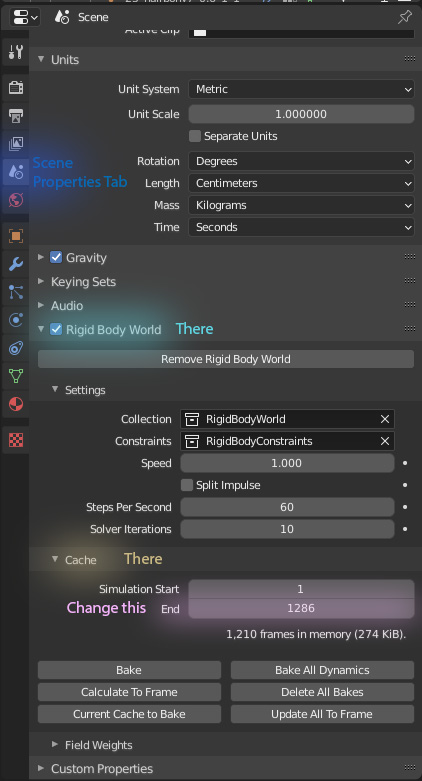 Not the answer you're looking for? Browse other questions tagged animation armature physics constraints rigid-body-simulation or ask your own question.

4
How do I Attach a Rigid Body to a Bone?
2
Rigid Body Problem - objects not colliding
1
Collision/Rigid body objects not moving an inch
1
Object physics not working when moved with armature?

2
Is it possible to parent an object and have the child retain its rigid body physics?
0
Rigid Body objects pass through Basket
0
Learning Rigid Body Constraints (Slider & Piston) - Active object keeps passing through passive?
1
How to make dynamic paint work with rigid body interactions during animation playback
1
Active rigid bodies not colliding with passive ones