How to apply force to a face of an object?

I wanna do a test on an square (softbody) where the top surface is fixed and i want to apply a force to the bottom surface toward down to see the deformation of object due to the applied force.

Does anyone know how to do that? Thank you in advance! 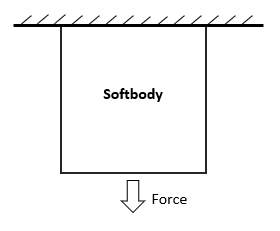 The result is likely to be something like this: 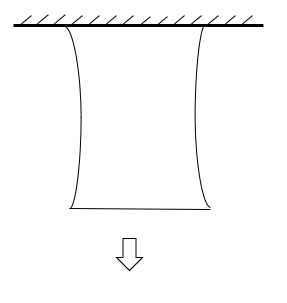 So there are a few questions here. First, how to anchor the top of the soft body?

Soft body physics are anchored through the use of the "goal" trait, which is by default set to 0.7 strength for all verts-- so once you start using goal to pin soft body verts, you might find that your soft body physics change.

Create a vertex group for your mesh. Assign the top vertices to that group, at weight 1.0. Now, on properties/physics/soft body/goal, specify your vertex group as the goal vertex group, then in soft body/goal/strengths, set the default weight to 1.0. Your assigned verts will no longer move with the sim-- they'll act pinned, as with cloth pinning.

The next question is, how to apply a force to a soft body mesh? There are a number of different ways. You could set collision type to "face" and then use a collider to press down on the mesh. You could use a force field. You could just use gravity.

What you describe in your comments is the desire to exert exactly 5 Newtons on your bottom verts. That's the force necessary to accelerate 5kg by 1m/s/s, or to accelerate 1kg by 5m/s/s. Using default Blender scales, and default soft body mass settings of 1kg, the simplest and easiest way to exert this force is via gravity. In properties/scene/gravity, set your gravity vector to 0, 0, -5.0 and your softbody's 1kg verts will be accelerated downward at a force of 5 newtons.

But what strength to use to represent 5 Newtons? Tests on 1kg and 5kg rigid bodies suggest that a strength of 120 is about right for 5N at 24 frames per second. If you want to get more exact, remember that the distance that an accelerating body travels is equal to at^2/2, where a is acceleration and t is time.

But if you want to know what it's going to look like after that? The answer is, it depends not only on your forces, not only on your soft body settings, but on your vertex density and your topology. Soft body physics are not real physics. Even though I did my best to answer your question, if you're wanting exact numbers for your forces, you shouldn't be using Blender's physics for your problems. Blender's physics are tools to create pictures. They bear only the tiniest resemblance to actual, real world physics.

Not the answer you're looking for? Browse other questions tagged modeling python or ask your own question.

4
How to create tentacles moving with the wind?
3
Soft Body - Preserve Volume when deformed
0
Can a custom optimization code be added for doing accurate mesh deformation simulation in Blender?

0
Scientific texture analysis
4
Animation Nodes: How can I apply a different matrix to every point in a mesh
1
Align text on the inside of a circle
2
How to apply a force via python to a rigid body wheel
0
Subdivision Surface Artifact with Creases
0
How to make such cogwheel in 2.82?
0
Modeling Advice - Extrude Organic Shape
0
Best way to tile a complex shape with a texture?