I am trying to use the technique described here Python: Calculate angle between vertices to determine the angles between a list of vertices that is sorted left to right on the x axis 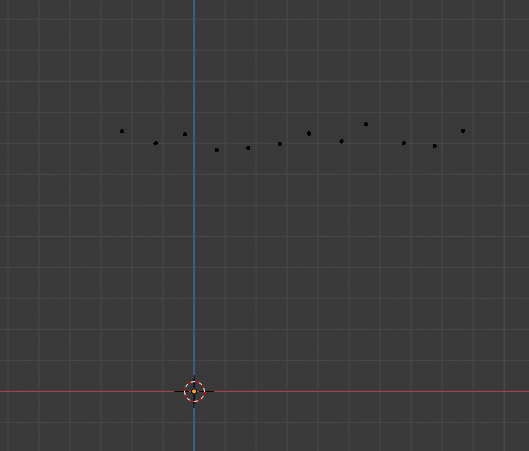 I can't imagine these angles are all less than 10 degrees especially since many appear to be on a 45 degree angle.

How can I correctly find the angles for a list of vertices in degrees?

Vert co as a vector is from origin point.

Diagram where the red ico is the origin of a mesh and the other icos are the vertices.

Question code is calculating the angle designated as alpha above between the vectors defined by the two vertex coordinates.

and the x axis Vector((1, 0, 0)).angle(vec) or if the points do not all lie on same XZ plane, the projection of vec onto the XY plane containing point verts[i - 1].co.

To project as 2d vectors onto Y=constant plane, can get the signed angle between the 2d vectors ignoring y.

Not the answer you're looking for? Browse other questions tagged python scripting vertices transforms or ask your own question.

3
Using python to manipulate vertices
4
How to order a list of vertices based upon position?
1
Scaling to a specific object
0
Add created vertices to a list
1
Select multiple vertices using a list of coordinates with KDTree
1
Best way to find the 2 closest vertices from a list of vertices?
0
Python draw 2 vertices under specified angle EDIT!
1
Setting Angles Between Bones