Can Krita and Blender be linked?

I have tried to look for myself but have not found the information I'm looking for.

I've seen that one can use the digital painting software Krita in connection with Blender. But I do not remember how to do so. Is this possible?

I couldn't find anything to do with Krita, but I do remember a synchronisation addon for blender that would allow painting in Gimp and seeing the texture automatically update in blender.

Here is a video of the addon, called 'External Paint Autorefresh' (Previously called 'Blender-GIMP Autorefresh'), in action and here is the site for the addon.

The site lists the features as:

You could set the path to Krita or any other external image procesing application in Blender's User Preferences accessible from the file menu.

From the image editor you can launch Krita with the image loaded by chosing Edit Externally. When returned to Blender refresh the image with Reload Image or Alt-R. 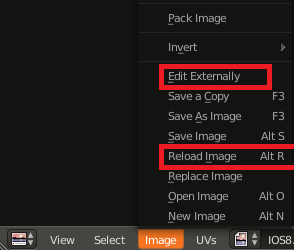 5
Baking AO and Shadows into one image?
8
Blender as an image editor software?
1
Paint on UV'ed model with external editor
4
Wood texturing - how to get seamless texturing
2
Find Blender PNG (or other format) Metadata in Adobe
1
Image reference decreases in quality after opening it in Blender
0
How make hair using textures